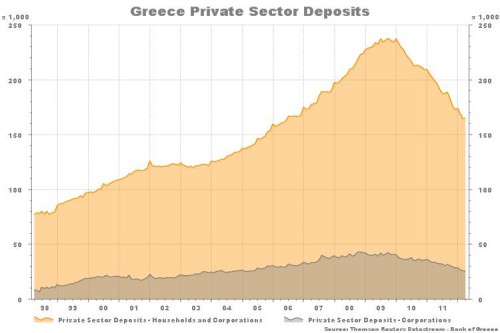 You can clearly see a credit boom out of all proportion to economic growth as deposits went from almost 80 billion to nearly 240 billion euros in ten years. That’s a trebling in deposits in a decade underneath which lies an unhealthy growth in credit that fuelled those deposits. Since the crisis hit in 2008, deposits have come down to about 160 billion euros. But in recent days there have been stories of massive withdrawals of deposits from Greek banks.

Some fear a bank run could be taking place, since the talk of a Greek exit from the euro zone has Greek depositors worried about an Argentine-style money grab. As I wrote in February about a Greek euro zone exit:

The New Drachma will be heavily depreciated and that will cause the price level to rise, which amounts to an instantaneous lowering of living standards. But if the currency can be stabilised then after this initial period, the devaluation doesn’t have to be inflationary. Iceland’s 2009 devaluation and capital controls is a guide here. In Argentina’s default, state coercion in the form of re-denominating non-Peso bank deposits helped. I remember being aghast at this theft at the time. But the reality is the state will want to drive out the use of all other media of exchange and so will be forced to do this with New Drachma as well.