17.05.2013
The main result of the privatization of the Polish chemical sector, founded on the principle of "have your cake and eat it", is the growing debt of companies from this sector. A real privatization seems to be an increasingly unrealistic prospect. ‪The government focuses its efforts on opposing Russian investment plans. 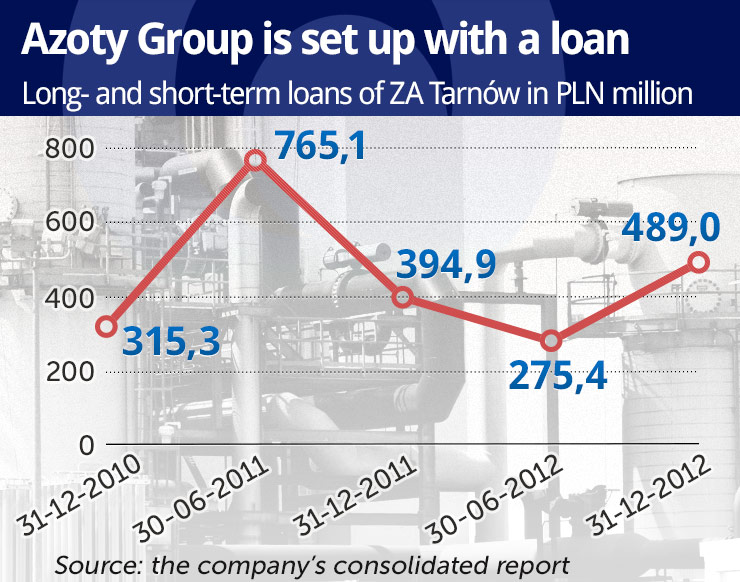 ‪- Consolidation is power – said Rafał Baniak, Deputy Minister of Treasury when he presented information on the consolidation and privatization of the chemical industry in the Senate in April.

‪The government’s current position does not differ significantly from the stance that expressed long ago. ‪For over a dozen years, the Polish government has remained unshaken in its belief in the consolidation of Polish chemical plants. ‪The only element that has been changing is the consolidation hub.

‪It all started with Ciech

‪The consolidation process began in the late 1990s, when eight chemical companies, including Fosfory, Soda Mątwy, Janiksoda and Alwernia went under the control of Ciech – a State Treasury company and a former foreign trade center of the chemical sector.

‪Later, the idea of consolidating the Polish chemical sector around PKN Orlen emerged. The state-owned Nafta Poland ‪was selected as another consolidator. ‪In the middle of the last decade, it seemed for a moment that the idea of ​​consolidation was put on hold, if not abandoned altogether. ‪In 2004, the government decided that each company from the chemical sector would follow its own privatization path.

‪In practice, this meant that Ciech took over another two companies: Organic-Sarzyna and Zamech, which was tantamount to further consolidation and floating three chemical companies on the stock market – Police Chemical Plant, Pulawy Nitrogen Plant (ZAP) and Tarnow Nitrogen Plant (ZAT). ‪Following this operation, the State Treasury remained the majority shareholder of the listed chemical companies.

‪At the turn of the decade, burdened with unsustainable debt, Ciech sold Fosfory to Puławy Nitrogen Plant, while the consolidator’s role was taken over by Tarnow Nitrogen Plant, which first took control over the Police plant, and then – in two stages – over Kedzierzyn Nitrogen Factory. 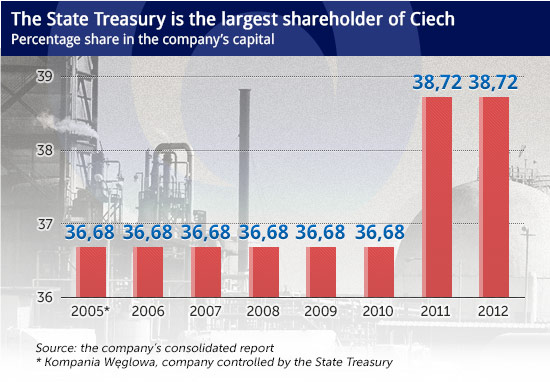 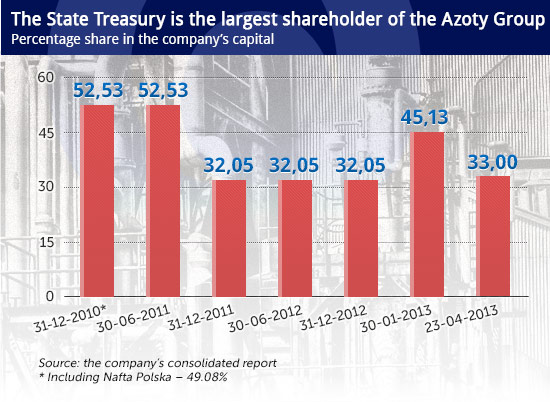 ‪There is no group, but there is debt

‪In the process of heading the consolidation, the State Treasury endeavours not to lose control over the chemical industry and, at the same time, to benefit from it, which means achieving the budgeted revenue. ‪In other words, the government strives to have its cake and eat it. ‪The pursuit of the State strategy in relation to Ciech resulted in the company’s mounting debt. ‪In order to pay them, the company began to dispose of its property. ‪In 2011, the company decided to issue shares with pre-emptive rights worth as much as PLN 442 million.

‪Importantly, between 2008 and the last days of 2012, the company’s short-term debt was several times higher than its long-term debt. ‪The debt structure was changed into a safer structure only after last year’s bond issuance.

‪For Ciech, the last three years were a period of asset disposal. The company sold Fosfory, Alwernia, Polfa and part of Zachem, which ultimately led to the liquidation of the Bydgoszcz plant. Organika-Sarzyna is also for sale and Puławy is one of the companies interested in taking it over. ‪As a consequence, the capital group developed since the mid-1990s ‪has recently dwindled, leaving Ciech with a huge debt. 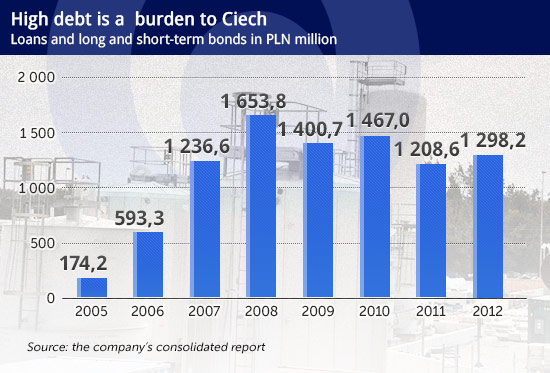 ‪In 2012, the chemical industry adopted a clearly formulated privatization strategy. In March last year, the State Treasury announced the following steps in its Privatization Plan‪: „continuation of the privatization process of companies from the chemical sector, as well as initiating privatization in the other enterprises. The disposal of subsequent stakes of companies listed on the WSE, such as Ciech, Zakłady Azotowe Puławy (Pulawy Nitrogen Plant), Zakłady Chemiczne Police (Police Chemical Plant) and Zakłady Azotowe w Tarnowie Mościskach (Tarnów Mościska Nitrogen Plant), will depend on the situation in the capital market”.

‪The market interpreted it as an invitation to announce a tender offer for shares of listed companies from the chemical industry. ‪It soon became obvious that this interpretation was correct. ‪In May 2012, Deputy Minister Rafał Baniak announced: – We will be waiting until the end of the summer for potential stakeholders’ tender offers in relation to the shares of these companies.

‪Both calls caused great trouble to the Stare Treasury. ‪In May 2012, the then Minister of the Treasury expressed his „cautious optimism” over the intentions of Acron. ‪In June, the Ministry stated that the takeover by the Russian investor „could have a negative impact on the value of other large chemical companies and their suppliers,” and on the strategy of ZA Tarnów supported by the government. ‪Consequently, Acron’s proposal was turned down.

‪Minister Paweł Tamborski commented on Sythos’s tender offer for ZAP shares: „We were surprised by the news.”

‪On the other hand, the then Deputy Prime Minister and Minister of Economy expressed his positive attitude to the tender offer for the shares of ZA Puławy.

‪- This would mean that ZAP may remain in the hands of a Polish owner. ‪I am personally in favour of this option – stated Waldemar Pawlak.

‪The Polish government’s discouraging attitude did not, however, deter the Russians who did not withdraw from the call and finally purchased slightly more than 12 per cent of ZAT’s shares. ‪Attempts at building a defensive strategy were made with the use of classical tools against a hostile takeover.

‪The first line of defence included a long-term strategy announced by the Board of ZAT and the announcement of plans to increase the company’s capital by 75 per cent through the issue of shares exempted from pre-emption.. ‪The proceeds from the issue were to finance investments, including takeovers. ‪The measure was to discourage shareholders from replying to Acron’s call.

‪The second line of defence was devised jointly by the company and the Ministry of the Treasury. ‪ Tarnów planned to take over – in two steps – the plant in Pulawy. ‪The first step was the financing of a tender call with a loan granted by the state-controlled PKO BP bank and a loan from PZU Życie; 10.3 per cent of ZAP shares were accumulated. The operation cost PLN 216.5 million. ‪The second step consisted in swapping Puławy’s shares for Tarnow’s shares. ‪This operation allowed the company to acquire 73.4 percent of ZAP shares. ‪By increasing the capital, Tarnow diluted the Russian stake to 9.7 per cent. ‪ Tarnow announced another call for the remaining shares of Puławy, in which – at the cost of almost PLN 309 million – it acquired 12.2 per cent of the company’s shares.

‪The third line of defence was devised by the State Treasury. It introduced a set of provisions into the Articles of Association that guaranteed state control over the Azoty Group established as a result of the defensive war, as long as the State held no less than 20 per cent of the  shares of Tarnow.

‪Kantor does not give up, the Treasury eats the cake

‪Despite the defensive action, the Russian businessman has not given up his attempts at increasing his stake in the Tarnow plant. ‪He currently holds more than 15.3 per cent of the company’s shares. ‪In order to avoid the legal obligation to call a tender related to an increase in the share capital of Tarnow from less than 33 per cent to over 45 per cent, the State Treasury sold more than 12 per cent of ZAT shares ‪ in April and currently holds 33 per cent of its capital; this message was communicated to long-term investors.

‪In its attempts to defend ZAT against a hostile takeover, the government created the third largest European chemical group with a total capital of EUR 1.4 billion.

‪- A European champion is being set up – says Deputy Minister Baniak, adding that a group is being established that „will join the European premier league in its business segment.”

‪The only problem is that in practice, defensive actions hampered the privatization of the company, as stated in last year’s privatization programme. ‪It is rather unlikely that any investor from the sector will be willing to buy the shares from the government. On the other hand, selling them on the stock market may mean that the shares will sooner or later fall into the hands of Kantor. ‪In this context, it is hardly surprising that the Treasury spokesperson stated that a full privatization was a distant prospect.

‪While protecting ZAT, the government also defended the interests of PGNiG. Nitrogen companies use 20 per cent of gas consumption in Poland. Since Acron controlled by Vyacheslav Kantor has access to cheap Russian gas, it is believed that the takeover of ZAT by a Russian investor would affect the interests of the Polish gas company.

‪The government’s problems with the Azoty Group are far from being resolved. Meanwhile, as a result of the consolidation process‪, the debt of the latter is growing, just like the debt of Ciech did in the past,