21.08.2015
The decline in oil price and economic sanctions deepened the slowdown in Russia’s GDP lasting from 2011. Due to the lack of internal and external growth drivers, this time Russia is unlikely to return to a high-growth path over the next few years.

In the first quarter of 2015 Russian GDP fell by 2.2 percent year-to-year (y/y), in the second by 4.6 percent y/y. In the whole half a year the economy declined by 3.4 percent y/y. Both the IMF and the World Bank forecast a recession in Russia for this year (-3.4 and -2.7 percent, respectively) and a stagnation in 2016 (0.2 and 0.7 percent), whereas developed countries gradually grow in strength and the world economy stabilizes.

Instead of focusing on the structural reforms that lead to the diversification of production, the authorities maintain the resource-based economy. Additionally they spend beyond means on defense, subsidies for Crimea and Donbas, and financial support for enterprises owned by the state or loyal oligarchs. No wonder that the budget lacks resources for investments in modernization and innovation.

Dramatic and permanent fall of oil and gas prices

Since July 2014 the oil price on the world markets has been consistently declining. In June 2014 Brent crude oil cost on average about 112 USD per barrel, whereas in July 2015 its price plunged nearly 50 percent to 57 USD, and in the first half of August reached the level of 48 USD.

Nothing indicates that this trend will be reversed soon. According to International Energy Agency oversupply of oil, Iran’s return to the international market, and record levels of global oil reserves put even more downward pressure on the oil price.

Maintaining its own production capacity remains another challenge for Russia. In 2014 Russia extracted 534 million tonnes of crude oil, only 35 million less than the peak levels of the Soviet Union (with Azerbaijan, Kazakhstan and other petroleum countries included in the USSR). Keeping such extraction requires huge investments in infrastructure, modernization and know-how, especially that the average profitability threshold for currently operating wells in Russia is rising.

Due to the pricing formulas in contracts between Gazprom and the importers of Russian gas, the oil price drop results in lower gas prices. Gas in the first quarter of 2015 was about 33 percent cheaper than in the second quarter of 2014.

In 2014 oil and gas were not extremely expensive. In fact, they were even 10 percent cheaper than in 2011-2013. Russia had already got used to high prices and had not tried to diversify its economy’s structure. The country is the second largest exporter of oil and the largest exporter of gas. In recent years crude oil, petroleum products, and gas accounted for about 70 percent of total Russian exports and provided half of total budget revenues.

The plummeting oil price may reduce the value of Russian exports in 2015 by the equivalent of 10 percent of GDP. According to OPEC calculations published in March, with the average price at 55 USD per barrel in 2015 Russian exporters will get 135 billion USD less than in 2014. The oil price drop by 1 USD means a shortage of 3 billion USD in Russian exports. In January Anton Siluanow, Minister of Finance, explained at the Gaidar Forum that at the average price of 50 USD per barrel, the budget revenues will shrink by approximately 50 billion USD.

Contrary to the assurances of the Russian officials, the economic sanctions introduced in August 2014 among others by the USA, Canada and the EU had significant negative impact on the Russian economy. The sanctions comprised the Russian state-owned banks, oil companies and military corporations. Additionally, a sale of the advanced technologies for the oil industry, dual use goods, and arms was limited.

The limited access to credits and necessary technological solutions depletes Russian savings and puts a drag on the productivity growth. Instead of refinancing in the West, Russia has to use national savings and reserves. For instance, in October 2014 due to financial problems the largest oil company in Russia, Rosneft, made a request for 60 billion USD of the state aid.

The Russian economy slightly depends on foreign financing. The foreign public debt relative to GDP is among the lowest in the world – about 5 percent. According to the Central Bank of Russia, the foreign debt of the public sector (i.e. the government, the central bank, state-owned banks and enterprises) amounted to 20 percent of GDP (378 billion USD) before the introduction of sanctions. While the total foreign debt of the economy accounted for under 40 percent of GDP (732 billion USD). For comparison, the last indicator in the USA is about 100 percent.

Paradoxically, the gooses that lay the golden eggs, Rosneft and Gazprom, are the greatest borrowers. Despite many years of favourable prices on natural resources, bad management led to colossal debts of these companies. For instance, at the end of the third quarter of 2014 Rosneft had to repay 65 billion USD while at the end of the first quarter of 2014 Gazprom had 55 billion USD of debts. 90 percent of Rosneft’s and Gazprom’s debts were denominated in foreign currencies.

The sanctions had considerable contribution to the collapse of the Russian ruble in the second half of 2014. Accumulation of record external debt payments in December 2014 (20 billion USD) led to the dramatic depreciation of the ruble. In particular, on 15 December it was revealed that the Central Bank of Russia supported the bond issue of Rosneft for an amount equivalent to 11 billion USD. Then, the ruble lost 10.8 percent. It was the largest one-day depreciation since the currency crisis in 1998.

On 22 June 2015 the EU unanimously extended the restrictions until 31 January 2016 due to the lack of progress in resolving the armed conflict in eastern Ukraine. The sanctions against Russia are not likely to be lifted until its withdrawal from the conflict in Donbas, and Crimea being reunited with Ukraine. Only the total humiliation of Russia would let the USA to normalize the relationships.

Russian state-owned banks and enterprises are getting used to the new conditions. They are almost entirely cut off from international financial markets, and the financing in the East has failed, including China. Meanwhile, in 2015 the economy has to pay back another 75 billion USD (6 percent of GDP) of the external debt.

The IMF report published in early August estimated the cumulative effect of sanctions will reach 9 percent of Russia’s GDP over the next few years. In the short term the sanctions may deplete the GDP by 1.0-1.5 per cent through the contraction of investment and consumption following the Russian counter-sanctions. In the medium term the limitation of foreign investment and technology will deteriorate the growth potential.

During prosperity Russia managed to collect an impressive foreign exchange reserves. On the eve of the sanctions, as of August 1, 2014, foreign-exchange and gold reserves of the central bank amounted to 469 billion USD (equivalent to 18 months of imports). These reserves included resources of two state funds – the Reserve Fund and the National Wealth Fund – that were filled with high profits from oil sales.

Reserves were used to repay foreign debt of the public sector and stabilize the ruble. In the last 12 months, the central bank sold 111 billion USD (24 per cent) of its reserves, including 26 billion USD from both of the state funds. Eventually Russia possesses over 350 billion dollars of reserves (about 1/4 of GDP) which makes up a solid cushion even if the sanctions and low oil prices continue for several years. 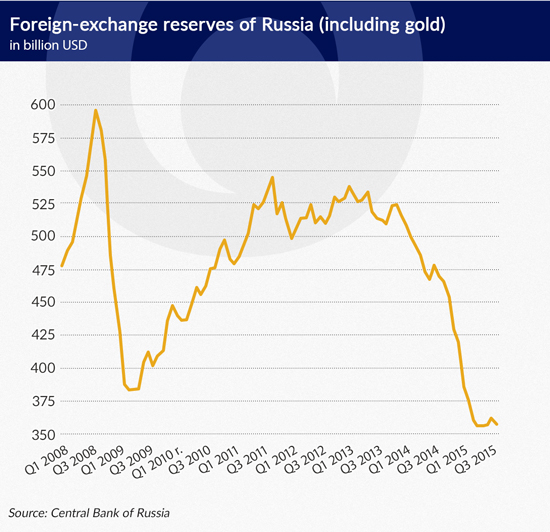 Disillusionment with the lack of structural reforms

Difficult economic situation could facilitate the change of government and justify more market-oriented economic policy. For the first time since 1998 Russia is actually forced to reform the economy to launch the internal growth mechanisms. Despite the harsh economic situation, however, the government avoided structural reforms, mentioned German Gref, CEO of state-owned Sberbank, the largest bank in Russia, at the end of May at the forum in Astana.

The economy remains politicized and monopolized, whereas state-owned enterprises and private ones that belong to those around President Vladimir Putin are backed up from the central budget. Former finance minister Alexei Kudrin confirmed it and added that Russia faces at least five years of stagnation.

The state has built crony-capitalism where success in business depends on ties with the authorities. Therefore, it remains one of the most corrupted countries. According to Transparency International it ranks 136th in the world in terms of the Corruption Perception Index.

Instead of reforming the economy and improving relations with the West, Russia commits to modernization of the armed forces and interfering in the conflict in Donbas. Implementation of the budget for the first quarter of 2015 shows that defence spending absorbed 9 percent of quarterly GDP, whereas 3 per cent are planned for the whole years. For comparison, Poland spends on defence 2 percent of GDP, and the USA – 3.5 percent.

The Russian economy can hardly maintain such high military spending in the long term, but the authorities do not consider this. Alexei Kudrin lost his post of Finance Minister in 2011 exactly because of opposing excessive expenditures, particularly the military and social ones.

In addition to military spendings associated with the annexation of Crimea Russia covers also „civil expenditure”. In 2014 it spent on support of Crimea approximately 4 billion USD, and for 2015 another 2 billion are scheduled. Subsidies from the central budget amounts to about 80 percent of the peninsula’s budget revenues. The state supports the civilian population of Donbas as well.

Collapse of the resource-based economy

The crisis is systemic. Russia pays a high price for the lack of diversification of the economy’s structure, in which the primary sector (gas, oil, metals, wood etc.) brings over 1/3 of GDP. The decrease in world oil prices and the introduction of sanctions by the West only deepened internal problems.

The Russian economy will be subject to sanctions and low oil prices for a long time. The geopolitical conflict limits investment abilities, and thus the potential of the economy in the long run. Only market reforms may activate internal growth mechanisms. The authorities, however, do not hurry to impose reforms.