Billions spent on online advertising will go to the mobile market

20.09.2016
Analysts are very optimistic about the potential growth of the global market for online advertising, despite the fact that there are increasing numbers of ways not to see them. They expect that the market of mobile advertising will grow especially quickly. 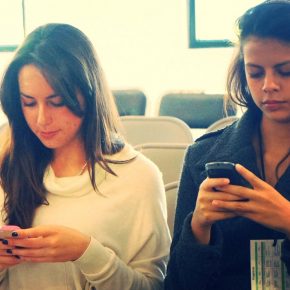 In five years, the global online advertising market will be worth a little over USD260bn or 69 per cent more than in 2015 ‒ claims the PwC in its annual report on the market and entertainment media. The analysts of Juniper Research have even bolder predictions. They forecast that the market will increase by 78 per cent, to USD285bn. Despite some divergence as to the scale and pace of growth, it is clear that the expectations of the experts are optimistic. 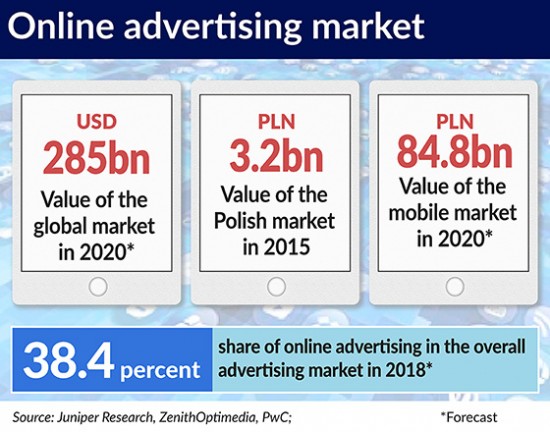 Juniper Research believes that the money spent by advertisers on the internet will go primarily to those who will be able to more accurately adapt the advertising to the preferences, interests and needs of specific target audiences. This precision in the delivery of advertising is guaranteed by companies which ‒ like Facebook or Google ‒ have spent years collecting information about the users. These two companies are the biggest players in the market of internet advertising. In 2015, Facebook had USD17.1bn in revenue from that source, and Google, the world’s largest player in the internet advertising market, had revenues of USD67.4bn.

In a year the internet will overtake TV

According to PwC, as early as next year, the value of the global internet advertising market will exceed that of television advertising, which currently has the largest share of the advertising pie. In Poland, this is still a more distant future. In its statement P4, the operator of the Play mobile network, which is one of the largest advertisers, says that its advertising expenditures on the internet will match those on TV in two years.

PwC emphasizes that the potential of the internet advertising market is not fully utilized, and the reason is that internet users are using solutions which allow them to block advertisements (so-called adblockers). Juniper Research expressed a similar opinion. Across the world adblockers are used by 200 million desktop users (in Poland ‒ more than 1/3 of all desktop users) and more than 400 million users of mobile internet (according to the PageFair company), which means that ads are blocked on every fifth smartphone.

The British consulting firm Ovum believes that by 2020 the blocking of ads will decrease the value of the world advertising market by up to USD78bn. In the most optimistic scenario, in which Ovum analysts assumed that advertisers will be able to adapt the advertising and its delivery to the expectations of online consumers, the decrease could only amount to approximately USD17bn.

The internet users’ fatigue with graphic ads, which is manifested in their blocking, leads to the growing popularity of native ads and the emergence of new ideas. According to the company Adyoulike, global expenditures on native advertising will amount to more than USD59bn in 2018, while in 2015 they amounted to less than USD31bn.

One example of the search for new ways to place ads is the offer of the Snapchat social networking site. It allows advertisers to introduce their own names of photo filters which are offered to the users. This way of advertising is tested, among others, by Taco Bell, Nike and General Electric. Such advertising is not cheap. The daily cost is up to USD750,000 but as Marisa Thalberg, the head of marketing at Taco Bell, told “Wall Street Journal”, its effectiveness is surprisingly high.

The forecasts of the ZenithOptimedia media agency are even more optimistic. ZOM estimates that as early as next year the value of mobile advertising in the world will reach USD99.3bn, following an increase by 29 per cent, and will be almost USD2bn higher than the value of advertising on personal computers.

Along with the expected significant increase in the consumption of video content by users of smartphones and tablets – according to the forecasts contained in this year’s edition of the “Cisco Visual Networking Index” the value of the mobile advertising market will increase by more than 11 times in the years 2015-2020 – there is an expectation of rapid growth in mobile video advertising. The biggest beneficiaries will be first and foremost Facebook, YouTube (owned by Google), as well as Snapchat and Twitter.

In the case of mobile video ads, great hopes are placed in the cellular networks operating in the 5G technology, which should improve the parameters associated with the playback of the ads. As a result, the supply of mobile video ads should increase after 2020, when the emergence of the first commercial 5G networks is expected. 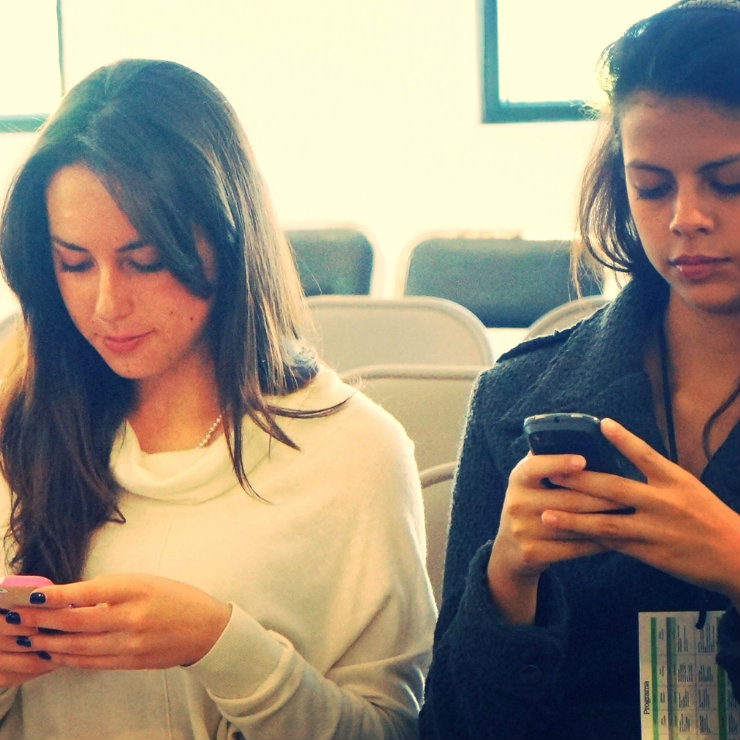 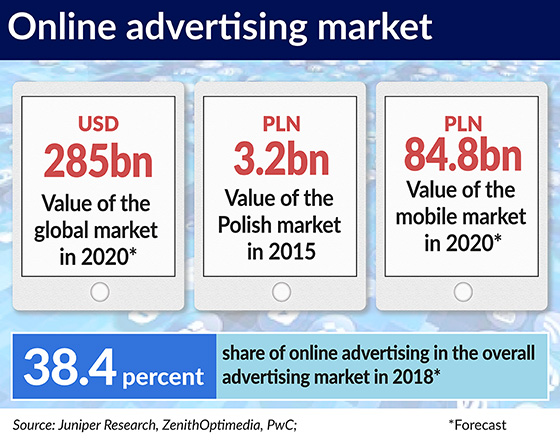