Poles work 24.4 per cent less hours than Americans. In the United States the employees not only work more, but are also more likely to work on weekends and in evenings.

Analysts, experts and journalists have repeatedly described Poles as one of the most hard-working nations in the world. Most of the studies, including one done by the authors of this analysis, emphasize that this opinion was influenced by the number of hours actually worked per employee in Poland. The „Polityka Insight” platform presented a publication showing that the actual working time of Poles may in fact be shorter than believed, while new research sheds more light on the working time in Europe and in the United States.

A report published by the IZA Institute of Labor Economics (a global research center bringing together scientists and experts working in the area of the economic functioning of labor markets) “Hours Worked in Europe and the US: New Data, New Answers”, does not directly dispel the diagnosis according to which Poles are as heavily overworked as is frequently claimed. However, it provides new reliable insight into the statistical differences in the working time between Europe and the United States. In this way it slightly weakens the previously held notion that Poles are putting in excessively long working hours.

The analysis of the differences in the working time of working age people (aged 15-64) between 18 countries of Europe and the United States reveals that Europeans work 19 per cent less hours than Americans. This translates into each person working one hour less on average. Poles work 24.4 per cent less hours than the Americans. In the United States employees not only work more, but they are also more likely to work on weekends and in evenings.

Alexander Bick, Bettina Brüggemann and Nicola Fuchs-Schündeln based their analysis of the working time on databases derived from economic research. Although the study came out in 2016, it is still worth paying attention to its results, because in Poland OECD data is frequently used, despite the fact that the data tend to obscure the reality more than they explain it.

Poles do not work the longest hours 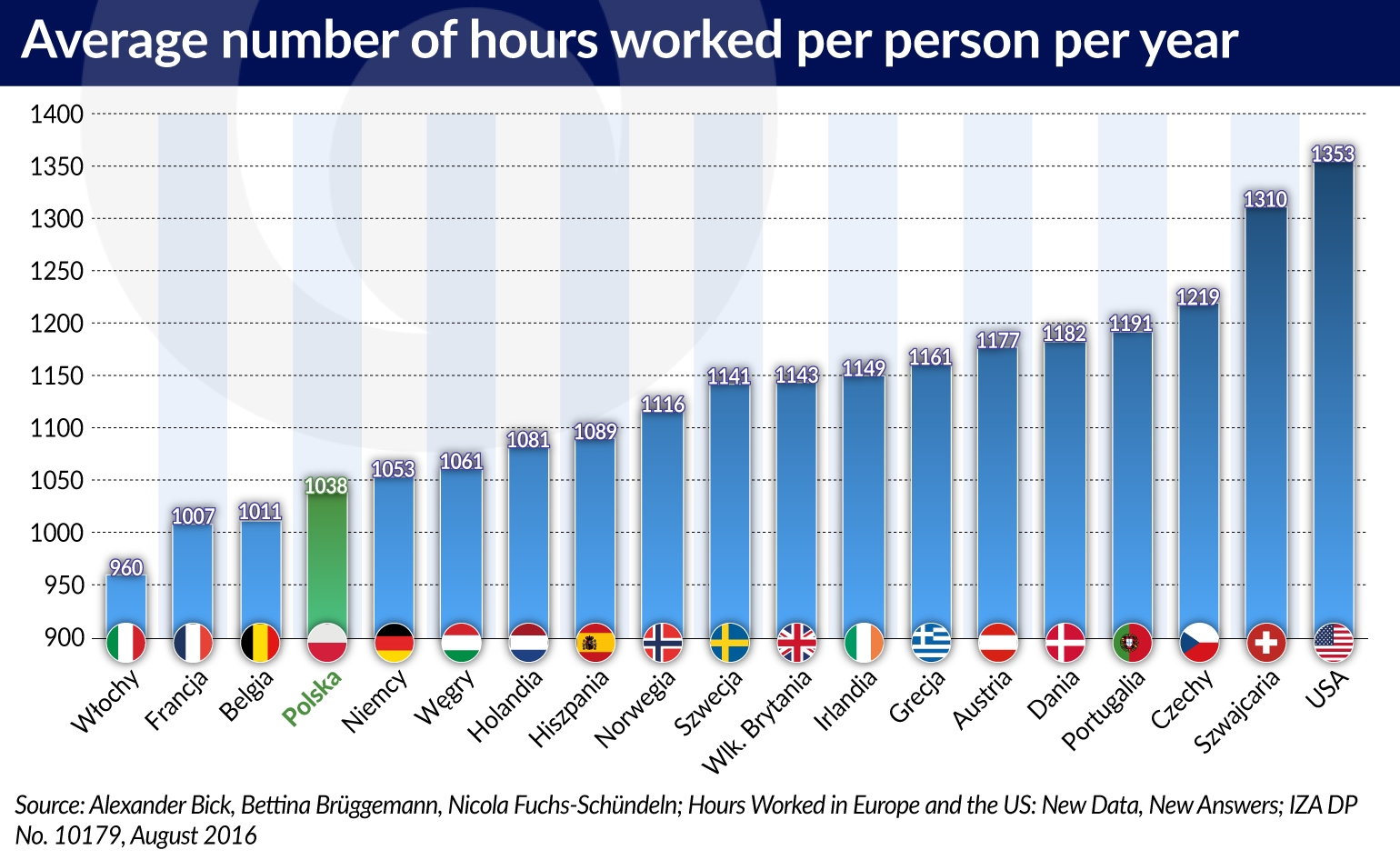 What factors are determining these differences

The researchers prove that the higher number of holiday weeks in Europe is an important factor in the lower number of hours worked by the Europeans. Longer vacations are not associated with an increase in the employment rate, nor with longer weekly working hours (in the subsequent months). It turns out that, on average, Americans spend less time on vacations and on paid leave, while Europeans spend more time that way, and are not „catching up” with their colleagues from across the Atlantic in terms of hours worked.

Although the European population is older than the American population, the age of the worker does not affect the average number of hours worked per employee. Similarly, the sex of the employees is not a factor significantly differentiating the situation on both continents. In turn, the sectoral composition, i.e. the industry in which the employees work, can account for the differences between the Americans and the Europeans only to a small extent. This is a pretty obvious conclusion, as it would be difficult to expect significant differences in working time which would be determined by the sector of the economy.

Firstly, the representative working time samples of the reference weeks differ between the individual countries in terms of the seasonality of work, while the data on working hours per employee collected in a given country are not properly adjusted by the statistical bodies in order to ensure their comparability between countries. After all, no statistical body in a given country collects data for each of the 52 weeks of the year. As a result, the lack of measurement consistency potentially hampers the comparability of the measured hours. For example, in Poland the data on working time are provided by Statistics Poland. However, that institution calculates the working time in a less complicated manner than the institutions in other countries. It only takes into account the principal place of employment and does not collate the results of employee surveys with surveys of entrepreneurs, as some countries do.

Secondly, the researchers from IZA say that the hours which were not worked due to holiday leave are systematically underreported in the labor force surveys. In Poland, Statistics Poland calculates the working time for a week in which there were no national holidays and additionally does not account for sick leaves and paid holidays. It then uses these inflated results in the calculations of the annual working time for the whole country.

The researchers from IZA confirm OECD’s warning that the national statistical agencies use very different types of datasets and methods for the preparation of their estimates. Because of that, the OCED data are not suitable for comparisons between countries, but only for comparisons of trends over time within a given country. And it is precisely this dataset which provides the foundation for media messages presenting Polish workers as working extremely long hours.

The Europeans work 19 per cent less hours than the Americans. This difference is mainly due to the different number of days of the annual leave, the educational composition and the fact that the employment rate is lower in some European countries. Depending on the country and the region, the differences in the number of weeks worked in a year can account for one-third to one-half of the difference in the hours worked in Europe and in the United States. These data, in turn, result from the educational composition of the given country’s inhabitants. Given the fact that there is a negative correlation between the weekly hours worked and the employment rate, it creates a promising research agenda relating to the modeling of these relationships.

The above factors do not fully explain why Europeans work less than the workers from across the Atlantic. Therefore, it will be crucial to deepen the research with an analysis of why educational composition determines the employment rate of a given group, but not the weekly number of hours worked. Additionally, the research has revealed how divergent statistics, collected by various analytical agencies, can lead to misguided diagnoses. And after all, socio-economic assessments, which to a large extent affect political decisions, depend on the quality of data.