11.07.2016
The Croatian economy ministry is thinking about removing the planned liquefied natural gas (LNG) terminal on the northern island of Krk from its list of strategic investment projects.

Moves towards building the planned terminal – which would receive, store and re-gasify LNG – was initiated in 2010 by state energy companies founded LNG Croatia.

With a projected capacity of up to six billion square metres of gas, the cost of the terminal was set at EUR600m and including accompanying infrastructure, the total cost would rise to over EUR1bn.

The start of construction work was initially planned for mid-2016 and was set to last three years, but it is now not clear when it will begin.

Local media has reported that company LNG Hrvatska had selected the European Fund for Energy, Climate Change and Infrastructure (Marguerite), Spain’s Enagas and an unnamed consortium that operates a floating terminal in the Lithuanian port of Klaipeda for the construction of an LNG terminal on the Adriatic island of Krk. Karamarko’s statement came shortly after the European Investment Bank issued a statement saying it is considering providing a EUR339m loan to LNG Hrvatska for the implementation of the project.

The terminal will include a tanker jetty to accommodate the LNG carriers, 2 LNG storage tanks with a total storage capacity of up to 360,000 cubic metres LNG, vaporisers and ancillary equipment, the EIB said at the time.

But now, according to Croatian business news portal Poslovni.hr, the new economy minister Tomislav Panenic is mulling removing the ‘strategic’ status that the project was given by the country’s previous centre-left government.

The Croatian LNG terminal is regarded by the European Commission as a strategic EU energy project.

Klaipedos Nafta’s CEO Mantas Bartuska said in June that the Croatian government must make up its mind on the project. „This may affect project implementation deadlines, but the state must answer whether or not they want the project to be carried out,” Bartuska said.

„There is a project company in Croatia that is carrying out the preparatory work, but support from the state is necessary for a successful implementation of the project. We are watching the situation and will assess it, but state support can be ensured if the political things are sorted out there,” he said.

The EU backed the project in October 2014, offering EUR4.9m towards a feasibility study for the project. The EU called it important for “building an infrastructure needed for assuring the energetic security of Europe”.

In December 2014, Robin Dunningan, secretary for energy policy at the US State Department, confirmed American interest in the project as well. She noted that it opened up the possibility of Croatia becoming a regional gas supply hub.

Dunningan added that the US also wants the proposed Trans-Adriatic Pipeline, TAP, which is intended to pump Caspian Sea gas to Europe, to go through Croatia and Bosnia, giving the region an alternative gas supply and decreasing regional dependency on Russia.

President Kolinda Grabar Kitarovic also reiterated the importance of the LNG terminal project during her visit to Poland.

“The construction of the LNG terminal on Krk, hopefully in the near future, and the connection towards the Baltic and Poland – I think it would contribute a lot to energy efficiency and security,” Kitarovic said.

Oil and gas expert Davor Stern told BIRN that a planned network of LNG terminals across Europe would force down the price of Russian gas, reducing Europe’s dependence on Moscow by undermining its monopoly.

“It’s good to have one LNG terminal [in Croatia] as a possibility for de-monopolizing the market. It’s now only a question of whenever it should be a big or small terminal, depending if there is interest from neighbouring countries without access to the sea,” Stern said. 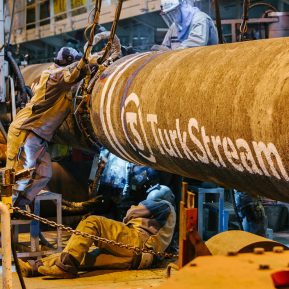