On January, the Czech online daily idnes.cz informed that the news platform Info.cz merged with the news aggregator Zdroj.cz. This merger is one of the latest manifestations of series of M&As on the Czech media market.

Info.cz Online Media, formerly known as Info.cz, is a joint-venture media project co-owned by Czech Media Invest (CMI), a holding company focusing on acquisitions and management of media assets in Central and Western Europe, and a company called Fount Media. CMI is co-owned by the Czechoslovak duo: Daniel Kretinsky and Patrik Tkac, some of the richest businessmen in their respective countries. Through its subsidiaries, Czech News Center and Czech Radio Center, the holding controls a number of radio stations and news publications in the Czech Republic. The Czech billionaire, and a co-owner of the football club AC Sparta Prague, Daniel Kretinsky, recently expressed his frustration at the current state of the online media industry. “Despite the fact that they do not produce their own content, companies such as Google and Facebook take most profits for advertising online. This is why traditional media struggle,” Mr. Kretinsky was cited by Blesk.cz.

The new media project supported by the Czech entrepreneur is supposed to improve the public discussion on the Czech-language internet. “After the recent earthquake on the Czech media market, there is a lack of opinion-based news media platforms. Our news project is supposed to improve the quality of public debate in the country,” editor-in-chief of Info.cz Michal Pur told Idnes.cz.

Kretinsky’s CMI Group has been shopping since earlier last year. In April 2018, the Czech-Slovak holding entered into exclusive negotiations with The Lagardere group concerning the sale of its magazines in France, including Elle and its various extensions in the country. “For Czech Media Invest, a major media player in the Czech Republic, these acquisitions will further support its growth strategy by adding iconic brands with proven profitability to the portfolio. Czech Media Invest is making France a key pillar of its strategy,” said the company in its press release.

“Frekvence 1 and Evropa 2 are undoubtedly the best you can listen to in the Czech ether. But, of course, it is not only about these big radio stations, there is a great potential for development lying in other radios, as well as in digital projects, namely Youradio, a service for listening to music online on the web and on the mobile device,” CMI board member Daniel Castvaj said in a press release.

The wave of media takeovers by Czech investors

The aforementioned acquisitions made by CMI both in the Czech Republic and abroad are just the most recent examples of an ongoing trend of domestic media purchases from foreign, mostly German, owners. According to the Director of the Center for Media, Data and Society at the Central European University, Marius Dragomir, who mapped extensively the current Czech media landscape in his September 2018 report titled: Media Influence Matrix: Czech Republic, major shifts in the country’s media ownership began to occur in 2008.

“It all started in 2008 with Zdenek Bakala, a coal magnate, who acquired the publishing house Economia from its German publisher, the Verlagsgruppe Handelsblatt group. No more acquisitions were made for the next several years as the economic crisis wreaked havoc on the country’s advertising and media industry,” Mr. Dragomir writes.

“Then, in 2013, Andrej Babis, owner of the Agrofert manufacturing colossus, bought Mafra, publisher of the dailies Metro, Mlada fronta Dnes and Lidove noviny, three of the country’s most coveted daily newspapers. That marked the exit from the Czech market of the German owned media group Rheinisch-Bergische Verlagsgesellschaft (RBVG),” he added.

Likely alarmed by Babis’ entrance on the media market, the above mentioned Czech billionaire Daniel Kretinsky’s offensive soon followed. “A year later, Daniel Kretinsky bought one of the most profitable publishing businesses in the country, the Swiss-German owned Ringier Axel Springer Media, which runs the tabloid Blesk (the best-selling daily in the country), and a shoal of magazines,” Mr. Dragomir explains in the report.

There were also several M&As on the TV market, including international arbitration over the broadcasting license. TV Nova is a Czech commercial television station founded by Vladimír Železný, who sold it to the financial group PPF of Petr Kellner, nowadays owned by Central European Media Enterprises (CME). The arbitration, known as CME/Lauder v. Czech Republic, resulted in the payment by the Czech state of USD353m to CME. According to Mr. Dragomir several Czech oligarchs are planning to buy TV Nova from the CME group.

Except the state-owned Czech TV (Česká televise) there are also 2 other important tv channels — Prima TV, owned by GES Group and Ivan Zach, and TV Barrandov owned by Jaromir Soukup

The latest domestic takeover was in 2017, when Prima TV was acquired by a Czech company Denemo Media from its previous Swedish owner, Modern Times Group (MTG). Denemo Media is co-owned by local entrepreneurs Ivan Zach (majority shareholder) and Vladimir Komar. TV Barrandov is controlled by the company Empresa, which is fully owned by Jaromir Soukup. The station used to be majority owned by the steelworks Moravia Steel, which sold it to Empresa in 2012.

To finalize the wave of takeovers of Czech media owned by foreign investors, the Slovak Penta Investments soon came on the scene. “The same year, another powerful financial group, Penta Investments of Slovakia, took over Vltava-Labe-Press, a media house owned by another German publisher, Verlagsgruppe Passau,” Mr. Dragomir wrote.

In this way, over the course of 6 years, the most important media in the Czech Republic, that had been under foreign ownership since the 1990s, slowly came back under domestic control.

Category: Financial markets 06.12.2019
In the middle of October 2019, Velvon Bank, the sister company of the Czech online bank Air Bank, announced that it had been granted a German banking license. Velvon chose Munich as the seat for its German operations. 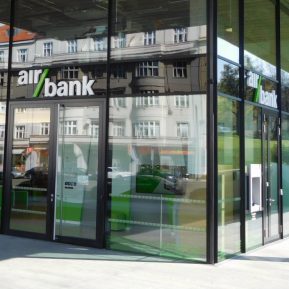