12.08.2016
The development of clean technologies in the energy industry is becoming a global trend. How to achieve this at the lowest cost, in order not to pass on the burden to energy consumers – that is a challenge faced by everyone, including Poland.

The system for the support of renewable energy sources (RES) is undergoing major changes, both in the countries of the European Union, and beyond. The dynamic growth of investment, the decrease in the prices of RES technologies and the emergence of a new group of small energy producers – the so-called prosumers – have led to the verification of the previously existing policies.

The example of Germany, where renewable energy sources meet one-third of the energy demand, is no longer a model for other countries. Germany has a stable and long-term but also very expensive system for the support of renewable energy, which translates into one of the highest energy prices for consumers in the EU. 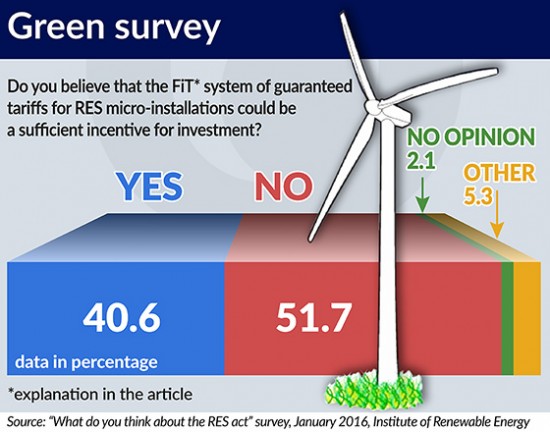 The German system is largely based on distributed sources – prosumers, i.e. energy consumers, who are at the same time its producers. However, some European countries, including Poland, prefer to support larger installations.

Poland supports renewable energy sources by introducing production quotas on electricity and biofuels. In addition, regions subsidize investments in renewable energy sources using EU funds. In certain Polish voivodeships the support programs can also be used by individuals as part of the “Prosumer’s program”, co-financed by the National Fund for Environmental Protection and Water Management and the voivodeship funds which joined the program earlier.

Poland decided not to introduce guaranteed tariffs which are considered to be the best instrument to support the development of distributed energy production. The feed-in-tariff (FiT) mechanism bases on an obligation for an energy company to purchase energy produced by a manufacturer of green electricity at a price specified by the lawmakers. The feed-in-tariffs are usually reduced over time, following the development of investments in renewable energy sources. The FiT mechanism has been introduced in more than 100 support schemes at the national and regional level.

“Examples of good practices include Germany and the United Kingdom, where guaranteed tariffs were a powerful mechanism supporting the development of renewable energy sources, encouraging thousands of users to start the production of energy by investing in photovoltaic systems placed on the roofs of their houses. It is worth noting that guaranteed tariffs in Germany, where 40 GW have been installed, were responsible for the implementation of approx. 75 per cent of the global installed capacity of photovoltaic energy and 45 per cent of the installed capacity of wind energy,” says Stanisław Pietruszko, PhD, from the Polish Society for Photovoltaic.

The first Polish Act on Renewable Energy Sources, adopted last year, provided for the introduction of guaranteed tariffs from January 1st, 2016. Shortly before that date, the entry of this provision into force was postponed until July 1st, 2016, and work was launched on the amendment of the Act on Renewable Energy Sources. The amendment prepared by the MPs was passed and signed by the President of Poland in June 2016. It no longer provides such a solution.

The budget or the consumer?

The FiT mechanism leads to the development of production of energy from renewable sources at the expense of higher electricity bills which could be painful for energy consumers. Fixed tariffs turn out to be a bone of contention in the industry, because every technology, and even installation capacity, requires a separate tariff.

Setting guaranteed tariffs, which are too high, usually leads to the overheating of the market and the bursting of the investment bubble. In 2010, the Czech Republic was among the leaders in the development of solar energy because tariffs were set at such a high level that investment paid off after only seven years, while investors were entitled to guaranteed tariffs for 20 years. The government quickly recognized its mistake and taxed the production of green energy and then abolished the feed-in-tariffs in 2013. After the production of green energy was taxed, investment stopped.

A similar scenario took place in Spain, where investment in renewable energy sources almost disappeared for a few years. Bulgaria introduced feed-in-tariffs as early as in 2008, but the mechanism was abolished last year. Ukraine introduced feed-in-tariffs in 2009 but – as a result of the political crisis – the tariffs have been reduced several times and the market has collapsed. This year new solutions were adopted – bonuses paid on top of the guaranteed tariffs for installations that use equipment produced domestically. Slovakia withdrew from fixed tariffs more than two years ago.

Huge support for the production of energy from renewable sources resulted in its dynamic development and significantly transformed the European market of electrical energy. The results include a significant drop in wholesale prices, which makes the production of many conventional power plants unprofitable.

The European Commission issued guidelines on support for renewable energy sources, which entered into force on July 1st, 2014. The guidelines recommend the introduction of auctions and a premium tariff (feed-in premium), according to which the seller of energy has a guaranteed price of its sale and the state pays for the difference in relation to the market price. In its guidelines, the European Commission also stresses that the production of energy for one’s own needs cannot be discriminated against. Many countries, however, do not comply with the recommendations.

Germany, France and the United Kingdom are some of the states which have already started implementing the recommendations of the Commission. The results of the auctions in Germany proved extremely encouraging. Poland also intends to introduce auctions for green energy, with division into “technology baskets”. The proposed amendment introduces a quantitative discount for prosumers – they will be able to receive a specified quantity in return for energy fed into the network. However, such a solution was criticized by the organizations representing the green energy industry as well as prosumers and  environmentalists. More than 50 amendments have been submitted so far in the course of the work of the Committee for Energy and State Treasury.

Experts emphasize that in a rapidly changing business environment the RES support mechanism should be flexible, fair and preferably simple. So far no one has come up with such a mechanism.