23.10.2018
In recent times, the transatlantic rift has been most visible in the discussions about two foreign policy issues: the re-imposition of sanctions on Iran and the pipeline project connecting Russia and Germany, known as Nord Stream 2. 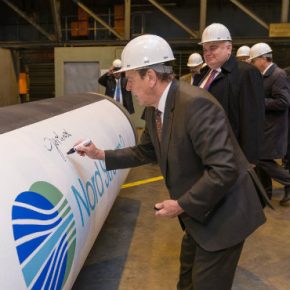 Gerhard Schröder, Chairman of the Board (©Nord Stream2/Wolfram Scheible) 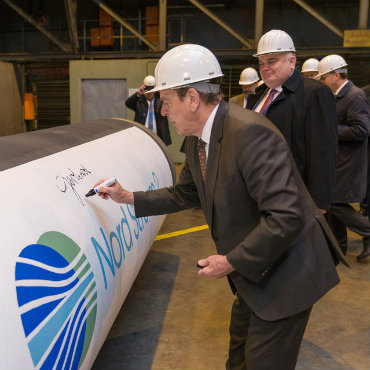 Gerhard Schröder, Chairman of the Board (©Nord Stream2/Wolfram Scheible)

Those two issues have caused many grievances on both sides of the Atlantic. Whereas the United States want to sell their liquefied natural gas (LNG) to Europe and impose heavy economic sanctions on Iran, Germany wants to get cheaper gas from Russia and do business in Iran. The increase in use of economic sanctions as a foreign policy instrument has fully exposed the fact that that neither the EU nor the individual member states have any means at their disposal that would provide their national companies with the comfort of feeling protected from a sudden shift in the US foreign policy. Large European companies doing business in the US would thus rather lose some money than face sanctions endangering their operations in a country for their business far more important.

Germany’s foreign minister Haiko Maas has continually emphasized the need to strengthen Europe’s autonomy and sovereignty in trade, economic and financial policy. “We are working on proposals on how we can make payment channels and systems such as SWIFT more autonomous and how we can set up a European currency fund,” Mr. Maas said at the opening of the 16th Ambassadors Conference in Berlin.

“With Germany, we are determined to work on an independent European or Franco-German financing tool which would allow us to avoid being the collateral victims of the US extra-territorial sanctions,” French Finance Minister Bruno Le Maier said. “I want Europe to be a sovereign continent not a vassal, and that means having totally independent financing instruments that do not exist today,” he added.

Especially the idea of autonomy in regard to financial policy is highly relevant in the context of the two aforementioned foreign policy issues: Nord Stream 2 and Iran. The biggest challenge for the European countries has been to find a way to shield European businesses from potentially devastating effects of the US sanctions. Germany and France are now working on a European international payment channel that would be independent of the US.

Since any European commercial bank handling transactions with Iran would face the US sanctions, there have been two alternative proposals on how to carry out financial transactions with sanctioned entities. One is through the use of central banks. Under that scheme, a central bank would essentially act as some sort of an investment fund without investing any money. It would simply collect money for all planned transactions, put it all together, and then send it to Iran where the individuals’ payments would be re-distributed to their intended recipients.

Central banks involved in such transactions would still be violating the same sanctions as commercial banks, and, potentially, could face the same consequences. The idea there is that Donald Trump’s administration would not go as far as to sanction the central bank of an allied state.

The other option is to create a European payment system that would be independent of the dominant existing international system SWIFT. It would have similar functions but without the interference of the US administration. According to Mr. Maas, such a project is already underway. “It will not be easy, but we have already begun to do it,” he said at the conference in Berlin.

Ironically, Europe is now pursuing policies that seem to be largely resembling the actions Russia took after 2014. After the annexation of Crimea, and the following US sanctions, Moscow quickly responded by setting up a Russian payment system to reduce the power Washington held over Russia’s financial transactions. The so-called Mir payment system was successfully launched in April 2015. Besides the payments system, Russia also created a bank specifically designed to shield its defense industry from any new US sanctions.

In November 2017, reacting to the sanctions pressure from the US State Department, Moscow created a list identifying all banks that finance companies in the military and defense industry. Subsequently, the Russian government chose one of the country’s biggest banks Promsvyazbank, nationalized by the Central Bank of Russia in December, as Russia’s new “defense bank”. The bank was then transferred to government ownership and recapitalized. Serving only Russia’s defense sector, and not conducting any financial transactions with the United States, the bank has been immune to the threat of US sanctions (read more).

It is too early to say in which specific direction will Germany and France go to sidestep the US sanctions, but their commitment to financial sovereignty is quite clear. For Russia, it would be much easier to convince individual members states of the EU to drop the sanctions than the entire bloc composed of the EU and the US. With independent financial channels, European countries could deal with Russia on their own terms. The question then would be whether the EU would be able to formulate a single Russia policy, which so far seems unlikely.