29.10.2020
The structure of the retail market in Poland has changed significantly in the wake of the changing preferences of customers. It has become markedly concentrated. The eCommerce market has thrived. The COVID-19 pandemic is set to influence the deepening of the processes – NBP experts claim. 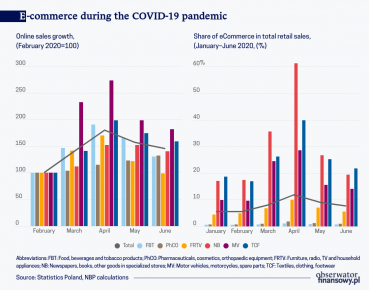 Internet is the other reality of commerce

Recent years have seen a strong development of the information society which uses telecommunications and IT services to receive, transmit and process information. The process is accompanied by a dynamic development of the telecommunication that provides access to broadband internet. On the other hand, this supports a rapid increase in the popularity of eCommerce (although the strong ROPO [research online, purchase off-line] effect is still present).

Young, working and high earning persons (High Earning not Rich Yet — the HENRY generation) are the most active buyers who research product information before they make online purchases, although online shops are becoming increasingly popular irrespective of the buyers’ demographics and their socio-economic affiliation. In 2019, over half of Poles made online purchases at least once in 12 months compared to merely 5 per cent in 2004, and online purchases are typically viewed very positively.

The eCommerce train is leaving the station

The value of Poland’s eCommerce market is rapidly growing. According to Euromonitor data, the value of the market of eTransactions, in current prices and after excluding the impact of indirect taxes, was estimated at merely PLN1.4bn (approx. EUR305m) in 2004. As the popularity of online purchases was growing, the market increased to PLN30bn (approx. EUR6.5bn) in 2018 (the average annual rate of return in 2004-2018 was 22.5 per cent), although according to some estimates, in 2018, the eCommerce market might have been valued at over PLN50bn (approx. EUR11bn).

The mCommerce, the market of ePurchases made via a mobile or a tablet, is a thriving segment of the eCommerce market not only in Poland (in 2011, the value of this market was estimated at less than approx. EUR65m, and in 2018 its value rose to approx. PLN4.9bn (EUR1.1bn), with the annual average rate of return at over 40 per cent). As the information society in Poland is set to grow further, the significance of the market of cross-border eCommerce will also be on the rise. However, despite the dynamic growth of the eCommerce in Poland, the average value of the online market basket per user is lower than in developed countries (similarly to the total retail market). 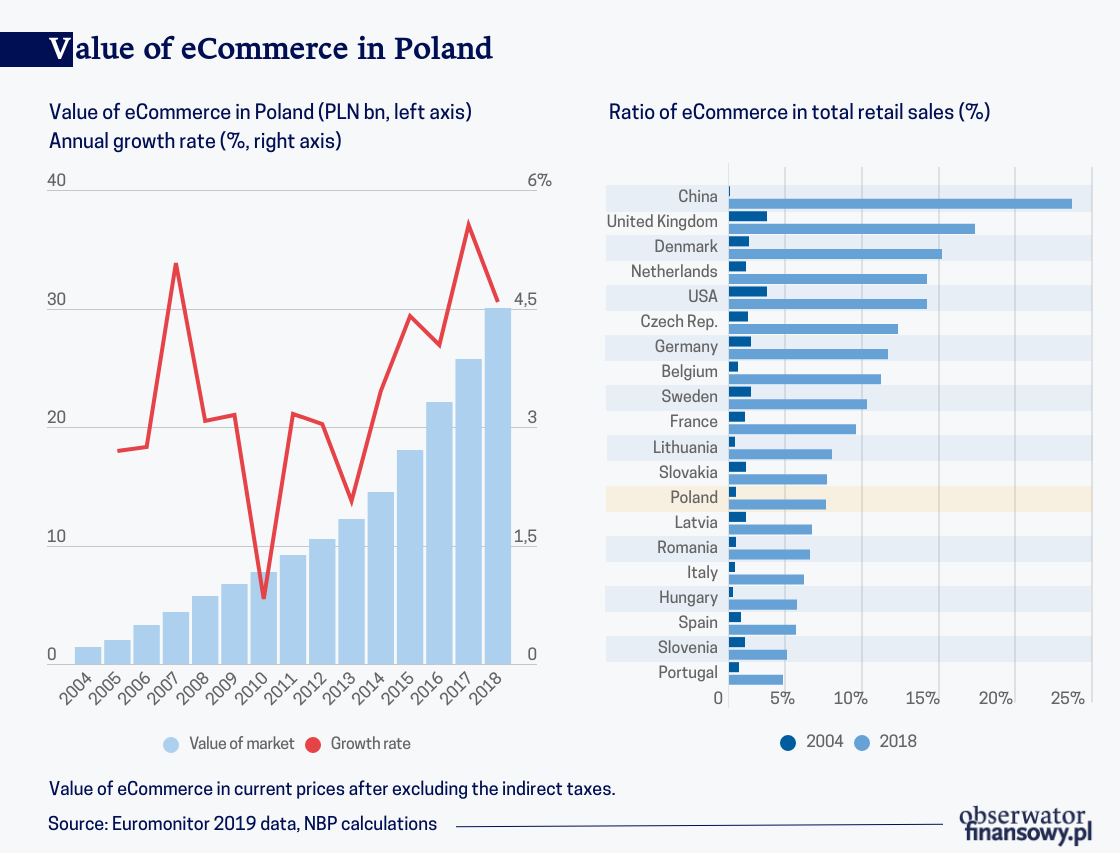 As the eCommerce is expanding, the online purchase market has recently become an essential part of the retail market not only in Poland but also in other developed and emerging economies. In 2004, the eCommerce market did not exceed 2.6 per cent of the total retail market in the countries where it emerged relatively early (i.e. the United States and United Kingdom). In 2018, the contribution of online sales to the retail market of selected economies ran at the average level of approx. 10 per cent. Almost one fourth of all retail transactions in China was executed online (mainly due to the expansion of domestic eCommerce giants). Online purchases in the UK, Denmark, the Netherlands, the US, the Czech Republic, Germany and Belgium were a slightly smaller chunk of the retail market (approx. 10-17 per cent).

In 2018, eCommerce transactions accounted for 7 per cent of Poland’s retail sales. According to forecasts, in the coming years the eCommerce market will continue to grow much faster than traditional retail, with mobile purchases becoming definitely the most rapidly expanding part of eCommerce.

The rise in importance of eCommerce and internet in business processes has drawn the attention of economists and they started to contemplate digitalization — the use of modern technologies by consumers and businesses and their impact on production, consumption, efficiency, employment structure and prices.

The growth of eCommerce is indispensably tied to advancing digital progress which facilitates the rapid comparison of the quality and prices of products and services. This boosts high market transparency, the ease with which competitors are monitored, is conducive to low operating and search costs, and low entry barriers for global companies to local markets. An attractive product offered in internet shops encourages consumers researching online to increase shopping frequency via internet, while significant barriers to online purchases, including those related to security and delivery, are gradually disappearing.

The raising awareness of customers has therefore led to fierce competition between conventional and online sales channels. The process results in the development of eCommerce which has a disinflationary effect evidenced by econometric analysis. An increase in the percentage of online buyers by 1 p.p. decreases on average inflation by 0.1 p.p. However, this estimate has to be handled with caution as a certain upper bound of the influence of eCommerce on prices due to a limited sample and difficult to isolate effects related to the changing competitiveness and market structure.

A string of challenges for eCommerce

The spread of the COVID-19 pandemic and the related economic and social restrictions have revolutionized (at least in the short-term) the shopping habits in Poland. For the safety and health reasons consumers were panic buying and then moved a substantial amount of purchases online. This sudden shift in consumers’ preferences has generated a sharp increase in the eCommerce-based stores and the traditional ones have decided to develop their own online sales. This shows that the so-called omnichannel is becoming an increasingly significant feature of commerce. The unprecedented increase in the importance of the eCommerce channel is evidenced by, among others, by Statistics Poland’s data — online retail sales increased by approx. 80 per cent in March and April 2020 compared to February 2020 (a significant increase in sales concerned the majority of sectors of commerce). Also, its share in total retail sales was almost 12 per cent in April 2020.

As the economy is re-opening after the lockdown, the popularity of online purchases has somewhat dropped. Nevertheless, the period of the most severe restrictions has highlighted the convenience and security of online purchases, and businesses have been made aware of the importance of this sales channel and the need to develop it further (e.g. increasing the availability of the delivery deadlines amid a surge in demand and launching new services, e.g. the phygital channel for both traditional and online shopping). It should be assumed that in the coming years the eCommerce market will be developing much faster than the traditional retail one.

The COVID-29 pandemic has contributed, among others, to the growth of eGrocery, the online grocery shopping. In 2018, prior to the pandemic, its scale of operations was insignificant — slightly less than PLN1bn (approx. EUE218m) in revenues, according to Euromonitor data. This channel was not very popular because of the lack of price competitiveness, the developed market of discount stores located in the vicinity of consumer homes, and numerous restrictions, e.g. prohibition of selling alcoholic beverages or fresh and frozen food outside the largest cities.

In new circumstances, a strong rise in precautionary demand and a temporary restriction on the operation of some brick and mortar shops during the pandemic has prompted the retailers to start digitalizing quickly in order to adjust to the new reality and new consumers’ habits. For instance, Shoper, the online shopping platform, reported over 200 per cent rise in orders on the grocery in the Q1’20. It should be assumed that while Poland’s eCommerce market continues to grow rapidly, the growth potential of the online food sales is low, and will be an addition to traditional stores in large cities or a solution for customers who are scared off by carrying heavy shopping bags.

The revenues prove this, as during the lockdown discount stores strengthened their position in sales, while hypermarkets posted heavy losses. By the end of April 2020, according to Nielsen, food sales in discount stores were, on a cumulative basis, higher by 13.6 per cent /y. For comparison, sales reported by hypermarkets in the first four months of 2020 were, on a cumulative basis, 20.4 per cent lower. In March 2020, Polish consumers created a stockpile by buying part of it in discount stores, and in April they did most of their Easter shopping at discount stores. Discount stores gained in importance mainly due to the number of branches, their convenient location and effective strategies implemented by managers that altered previously prepared selling strategies and to comply with the safety requirements (e.g. self-service checkouts). Throughout the pandemic, the stores continued to conduct aggressive marketing campaigns by promoting shopping during the day and night to help customers buy essential products at attractive prices.

The need to ensure security for both consumers and shop assistants poses an entirely new challenge for the market. Retail sellers can rise to it by offering the technological innovation implemented in recent years, although rather with the aim of increasing efficiency and reducing costs than meeting the pandemic-related restrictions. Self-service checkouts are becoming increasingly popular as they are relatively highly efficient — several self-service checkouts can be operated by one person who can also help solve problems with bar code scanning or device operation. Hypermarkets are beginning to offer cashier-free stores. Such solutions are mostly used by young people from large cities. The security concerns and the social distancing rules will most likely contribute to popularizing these solutions in the conventional sales channel on a larger scale.

The year 2020 also marks the progress in consolidation in modern retail sales channels. The acquisition of hypermarkets and supermarkets owned by one of the leading actors on the Polish retail market by a Danish discount chain store operator is one of the best examples. The deal is a part of the existing trend — a further increase in the concentration of Poland’s retail market that should be expected in the coming years, also due to the advancing expansion of modern sales channels at the expense of traditional, fragmented retail business. Amid strong competition, falling sales margins and applicable legal regulations, the present and future strategy of retail operators will most likely be based on maintaining low prices and, on the other hand, on providing access to high quality products at convenient locations. Investment in technological innovation and the ability to flexibly respond to the changing market environment and consumers’ preferences will be key factors in improving competition.

The article is based on the analysis of Poland’s central bank, NBP economists on the condition and prospects of Poland’s retail market. 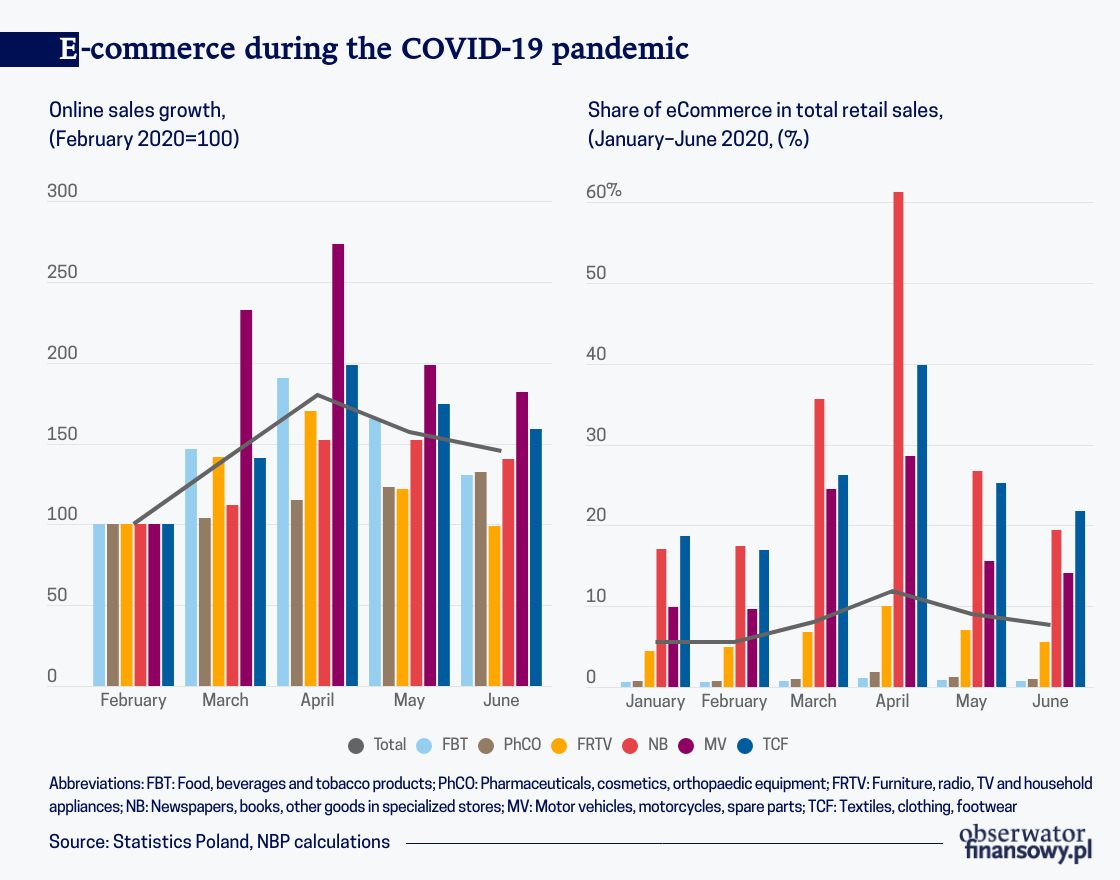