Overhaul of the special economic zones in Poland

09.01.2018
In 2017 the majority of the special economic zones celebrated round anniversaries of their establishment. At the end of 2016 the total value of investments made by companies operating in the zones reached EUR26.7bn with 332,100 FTEs.

At the Economic Forum in Krynica, then Deputy Prime Minister, and today the Prime Minister, Mateusz Morawiecki announced a thorough overhaul of these investment support instruments. It’s easy to point out certain problems with the zones, but the longest functioning investment incentive in Poland has an impressive legacy nonetheless.

According to the document entitled “Information on the implementation of the act on special economic zones” adopted by the Polish parliament, at the end of 2016 the companies operating in Polish SEZs had 2,263 permits to conduct business activity. The Ministry of Development estimated that in 2017 14 SEZs may have attracted EUR5bn in investments with 16,000 jobs. At the same time, every fifth project is implemented by a small or medium-sized company. All the parameters are significantly better than one and two years ago. 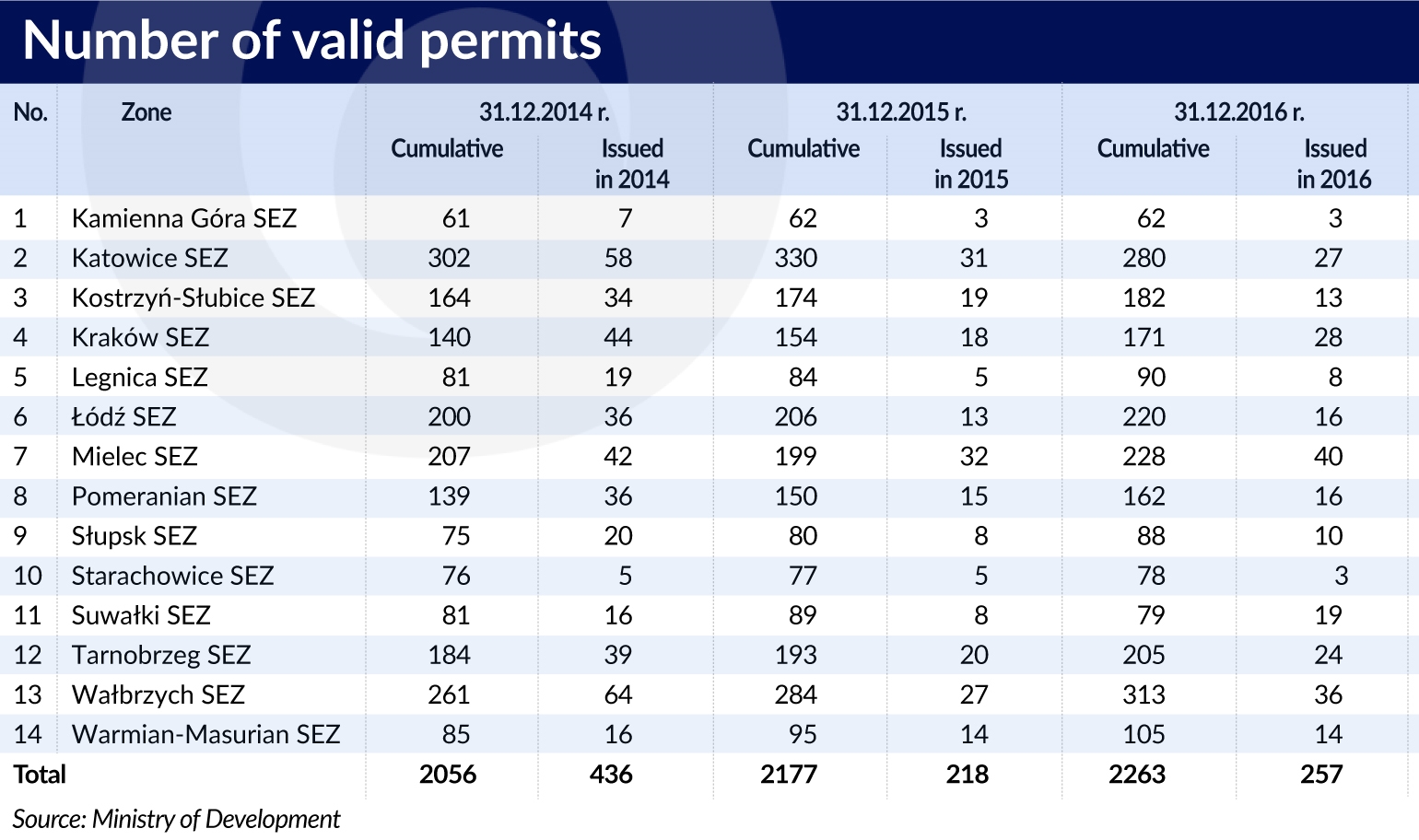 The effects achieved by the special economic zones confirm the effectiveness of this investment incentive, but time has come for changes. When the government created the special economic zones in the 1990s, the greatest challenge in Poland was unemployment. Creation of new jobs – this was the main purpose of the Special Economic Zones. That is why the number of new jobs declared by the investors was such an important element in the process of granting permits to conduct business activity in a zone. Unemployment already ceased to be a priority a few years ago, and today when the unemployment rate is down to less than 7 per cent (September 2017) unemployment prevention is no longer a policy priority. 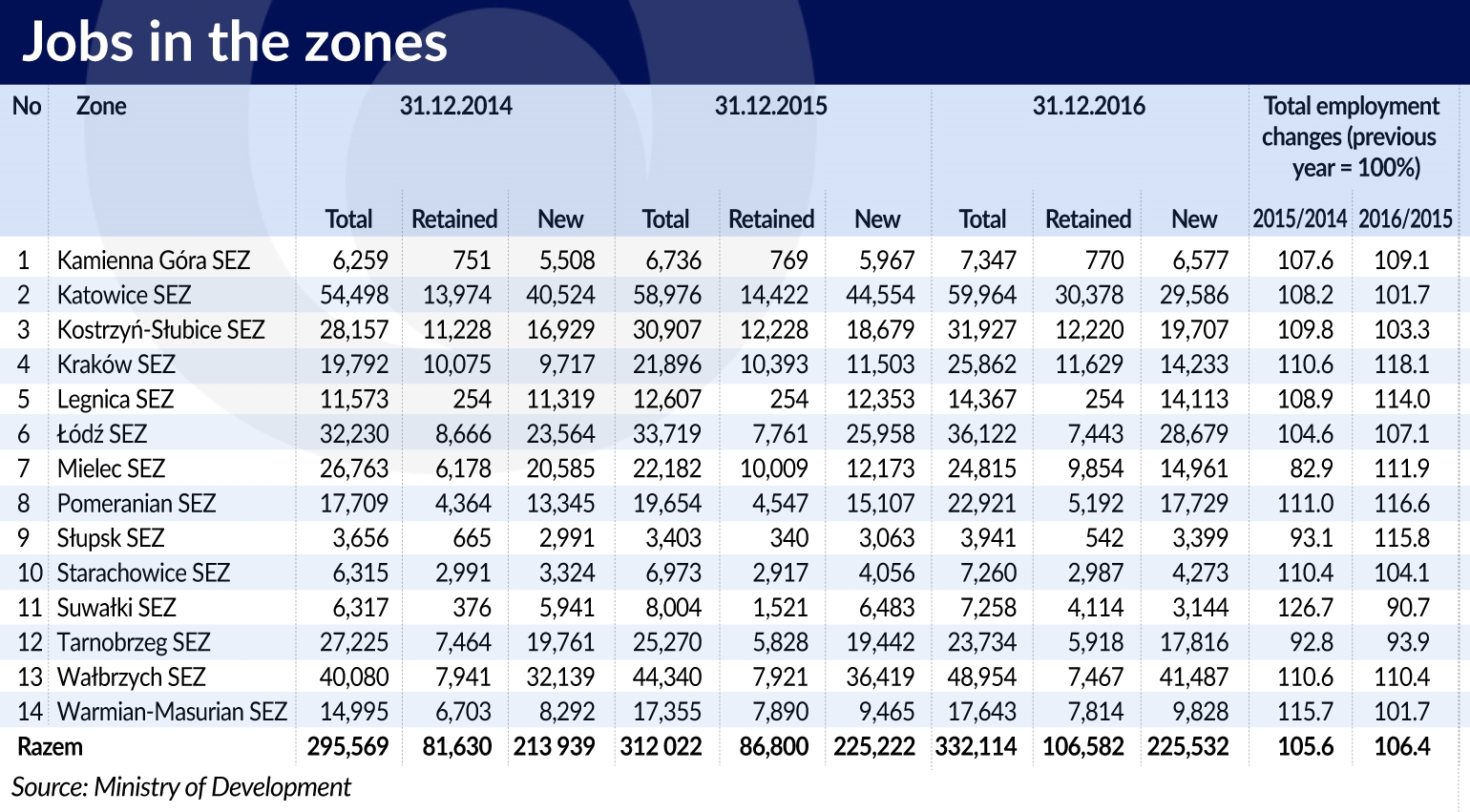 “There are 14 Special Economic Zones operating in Poland and they constitute an important element of the relationship with the investors. However, over the course of the years the assumptions concerning their impact have not been adjusted to the changing economic challenges and needs,” stated the Ministry of Development in an official communication published on the occasion of the presentation of a new system of support for investors.

It is worth recalling that a reform of the SEZs was already carried out by the government in 2014. These were minor changes, however, compared to the current plans. Back then the management boards of the SEZs were tasked with creating clusters and facilitating cooperation between businesses and schools and universities, as it was harder to find employees, and additionally it was often difficult to find people with the appropriate training or preparation for the job. This time, however, the entire system will be changed.

The Ministry of Development attempts to fix the system in the areas where it is not efficient. The most important change, aimed at turning “the entire territory of Poland into a special economic zone”, is not just a catchy slogan, but a systemic solution of the greatest weakness of the current SEZs. Under the current system, applying for support is very complicated: the investor submits a letter of intent to the zone, the zone prepares a draft of changes in its boundaries and forwards it to the Ministry of Development, the Ministry’s officials verify it, and when the application is ready it goes to inter-ministerial consultations, then is discussed by the government and finally signed by the Prime Minister. Including new territories into the boundaries of a SEZ can take as long as 20 months.

The Ministry of Development proposes a guarantee of corporate income tax exemption after an investor meets certain conditions in any location within the country, instead of the current area of 25,000 hectares which constitute 0.08 per cent of Poland’s territory.

Today, an investor is sometimes handled by eight separate institutions, which often duplicate each other. That is why companies managing the zones are to become the contact points in the region and the regional coordinators in the process of authorizing state aid – tax exemptions and government grants.

Nowadays, the Mielec SEZ has a branch in Szczecin and the Tarnobrzeg SEZ has a branch near Wrocław. In the new system they will operate in the counties assigned by the Ministry of Development. The 14 zones are still sorting out the details, because there are more than 20 counties in which more than one SEZ is operating, and some of them are disputing.

Under the current regulations the zones are supposed to operate until 2026 – this deadline was already postponed twice: in 2008 it was pushed back until the end of 2020, and in 2013 it was extended until 2026. The companies that enter into SEZs will be able to receive public aid in the form of tax exemptions only for nine years, and therefore they are in a worse situation than companies that received a permit a year ago or a couple of years ago.

The government could extend the functioning of the zones once again. However, the Ministry of Development chose a systemic solution which will not require subsequent changes in the future: in the new system the permit will be granted for a specified period of time – 10-15 years, and in the case of companies that choose locations already belonging to SEZs, the Ministry of Development will now expect them to meet not only quantitative criteria (specific investment outlays from EUR47,538 upwards and a number of jobs created), but also qualitative ones. The latter are to take into account the assumptions of the Strategy for Responsible Development, i.e. ensure structural development, scientific development, sustainable development and the development of human resources.

Structural development is to be measured on the basis of employment of personnel with specialized education or high-paying jobs, compliance with the country’s current development policy and exports. Scientific development will be calculated on the basis of cooperation with academic and research centers, and taking into account the development of local clusters. Sustainable development will be calculated with consideration taken of the location of the investment – for example, in areas with high unemployment. Additional points will be awarded to micro-companies, small and medium-sized companies, as well as projects implemented in small and medium-sized cities or in the countryside.

The Ministry of Development estimates that by 2027 the changes will have provided 158,300 new jobs, EUR27.9bn in investments and EUR879.5m in revenues to the State budget and the budgets of the local government units. This means that in ten years the SEZs are supposed to generate almost the same amount of investment as they did in the previous two decades. Creating so many jobs (whereas in the 20 previous years 225,500 jobs were created) also seems very difficult at a time when plants are becoming more and more automated. This is a very ambitious plan. 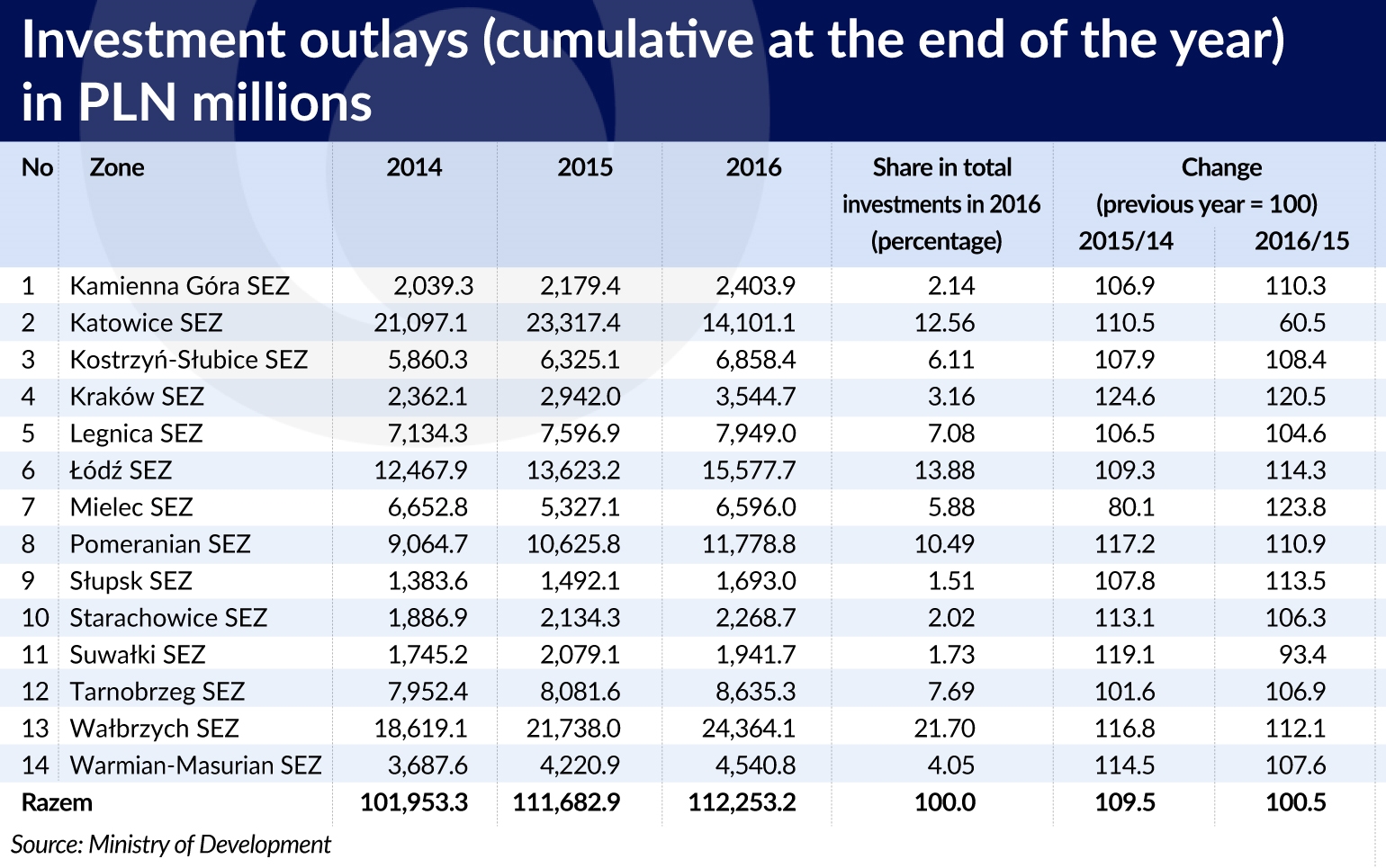 Experts are praising the new system for the simplification of the procedure for obtaining public support and for rewarding the choice of locations previously avoided by investors.

However, there is also some doubt. Mirosław Kamiński, the head of the Słupsk Special Economic Zone, believes that the incentives may be insufficient in the case of the Central Pomerania region, which is suffering from a transport disadvantage: the construction of the expressway S6 “is delayed until 2023-25”. An additional issue for the zone is the anti-missile defense shield in Redzikowo, because an American base means additional restrictions for investors.