24.03.2017
Every year people in Poland waste 9 million tons of food. The parliament is working on a legislation limiting the scale of waste, following other EU countries. 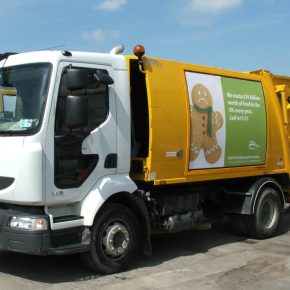 The amount of wasted food in Poland constitutes nearly 60 per cent of the value of Polish food exports from 2016 (as a comparison, the total value of expenditure on food and soft beverages in 2015 amounted to approx. EUR58.4bn). At the same time, Poland takes the 5th place in the European Union in terms of the quantity of food wasted per capita. This issue entails numerous negative effects, both of an economic, as well as of a social and ethical nature.

The Polish Senate (upper house of parliament) works on a bill on counteracting food waste. In this context, a question arises whether the proposed regulations, and in fact any regulations at all, will allow for the reduction of this highly negative phenomenon. It is worth examining how the countries, which at least attempted to do so, tackle this unfortunately very common problem.

The Food and Agriculture Organization (FAO) estimates that 1.3 billion tons of food are wasted every year in the world. Both individual consumers and all the other participants of the entire supply chain, from farmers to shops and restaurants, have their hand in it.

According to the FAO, the largest waste occurs in fruits and vegetables, roots and bulbs, and fish and seafood. What we waste the least is dairy, meat and oil plants. The fact that something is wasted to a larger or lesser extent is not the effect of a conscious choice. The differences result mostly from the shelf life of particular food types and their relative price, which influences the amount of expenditure that the supply chain participants and consumers accept to bear to protect the food from wasting.

Regardless of the food type, a clear correlation may also be observed between the affluence of a given country and the food waste occurring at particular links of the supply chain and at the stage of consumption.

In less affluent countries, higher food waste is recorded at the stage of production and distribution than in more affluent ones, primarily due to the lower efficiency of agriculture in poorer countries, as well as worse transport and storage infrastructure and less developed sales network.

In more affluent countries, on the other hand, more food is wasted at the stage of consumption. This is because the losses from food waste borne by more prosperous households are relatively less painful for them than in less wealthy countries, so their motivation to limit food waste is weaker. 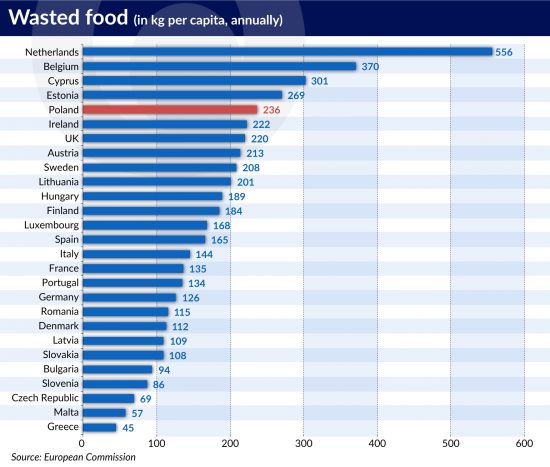 There are two main sources of information about food waste in the EU: the 2010 European Commission Report (Preparatory Study on Food Waste Across EU 27) and the 2016 Food Use for Social Innovation by Optimizing Waste Prevention Strategies Report (Estimates of European Food Waste Levels) funded by the EU. In both cases, the authors underline limited availability of data. As a result, the publications are based on estimates and data from some of the Member States, collected by using different methodologies. As a consequence, the data must be approached with a great deal of caution.

The results of the previous research in the EU are usually coherent with the above conclusions from the world research conducted by the FAO. The lion’s share in food waste belongs to households. A positive correlation has also been asserted between the country’s affluence and the amount of food wasted per capita at the stage of consumption. 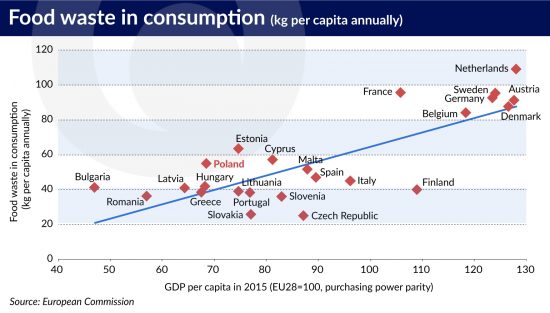 However, the correlation suggested by the FAO between the amount of wasted food per capita at each stage of the supply chain and income per capita has not been observed. This might be due to the fact that a part of the EU countries are significant food exporters or importers. As a result, they generate substantially higher or lower losses at the stage of food production and distribution than suggested by the size of consumption in a given country, which may distort the estimates.

In Poland, the situation is surprisingly different. In terms of the food waste trends, we are closer to less developed economies than to the EU countries. According to the European Commission data, Polish consumers are responsible for approx. 20 per cent of wasted food, whereas 80 per cent may be attributed to the supply chain. Such vast disproportion and deviation from the EU average may partially result from the fact that Poland is a significant food exporter (according to the preliminary data of the Ministry of Development, in 2016 the value of Polish exports of agricultural and food products amounted to EUR23.9bn). Consequently, Poland sees relatively more waste at the level of the supply chain than suggested by the amount of domestic food consumption. Unfortunately, Polish society can be expected to adopt some of the negative food handling attitudes as it becomes more affluent.

The principal measure aimed at limiting food waste in Poland is the possibility for enterprises to deduct VAT from products (with unexpired shelf life) donated to public benefit organizations. Additionally, they may include the value of the gift in tax deductible costs and thus reduce the tax base for CIT. Similar tax reliefs are also applicable to food disposal, so in effect the regulations are not really an incentive for food producers and shops to reasonably manage the surplus food.

The above is confirmed by the data of the Polish Federation of Food Banks, according to which in 2015 only 12.6 per cent of food provided to food banks originated from gifts donated by food producers, and just 2.1 per cent from commercial networks (data exclude fruit and vegetables donated by farmers, who – due to the Russian embargo – were not able to export and thus also donated their products).

In July 2016, the Senate’s Family, Senior and Social Policy Committee submitted a bill on counteracting food waste. Currently, a report of social consultations on the bill is under preparation.

The most important elements of the proposed bill are as follows:

The proposed regulations, together with the provisions binding in Poland now, will combine the solutions applied in other EU Member States. The obligations to conclude a contract between shops and NGOs and to pay a fee for food disposal are already effective in France. Tax relief for food donation to charities is introduced in Italy, Hungary and other countries. And the prolonged “best before” date for products provided to NGOs is applied, among others, in Sweden and Finland.

In Poland, where the supply chain is responsible for the majority of losses, such solutions may be expected to be effective. If we assume that individual consumers are going to prevail in the structure of food waste along with the growth of society’s affluence, the legislators should consider complementing the new regulations with solutions limiting waste by the average Pole today.

Denmark is a country worth analyzing. According to the data of the Danish Ministry of Agriculture and the magazine Danks Handelblad, between 2010 and 2015 food waste in Denmark was reduced by no less than 25 per cent.

Several factors have contributed to this success: a clever combination of growing social awareness of the negative effects of food waste, the intent to maximize profits both by producers and consumers, and corporate social responsibility.

The best example of this kind of synergy is shops specializing in food with a shelf life close to an expiry date, or perfectly valuable food which does not meet the saleability conditions (for example due to damaged packaging, label, end of seasonal offer or even non-standard shape of fruit or vegetables). Such shops may be supplied from all parts of the supply chain where food losses arise (farmers, processing facilities, restaurants and other shops). They may be provided with food both in the form of gifts and commercially. This increases the interest in such forms of cooperation in other food producers or sellers. Indeed, it is pure profit for them: they maximize the margin by selling products which otherwise would have to be disposed.

Stands with food close to its expiry date are also appearing in popular commercial networks. Moreover, they are increasingly more prone to withdraw from quantity-based special offers, which result in irresponsible purchases of excessive amounts of food. Danish society has already matured to doing well-thought-out shopping, storing food properly, and taking unfinished meals away from the restaurant. There are even mobile applications informing about discounted food in shops and “kitchen clearance” sale offers in restaurants.

The Danish experience also shows that the activation of the private sector may be particularly effective. This is because market-based solutions to the problem of food waste allow for both the producer and the consumer to profit, which encourages all the participants of the supply chain and consumers to get voluntarily involved in action aimed at the reduction of food waste.

However, the low availability of data proves that this socially acute and very expensive problem is not treated seriously enough in Europe. For the evaluation and calibration of the economic policy carried out in this area, regular statistical research is needed. 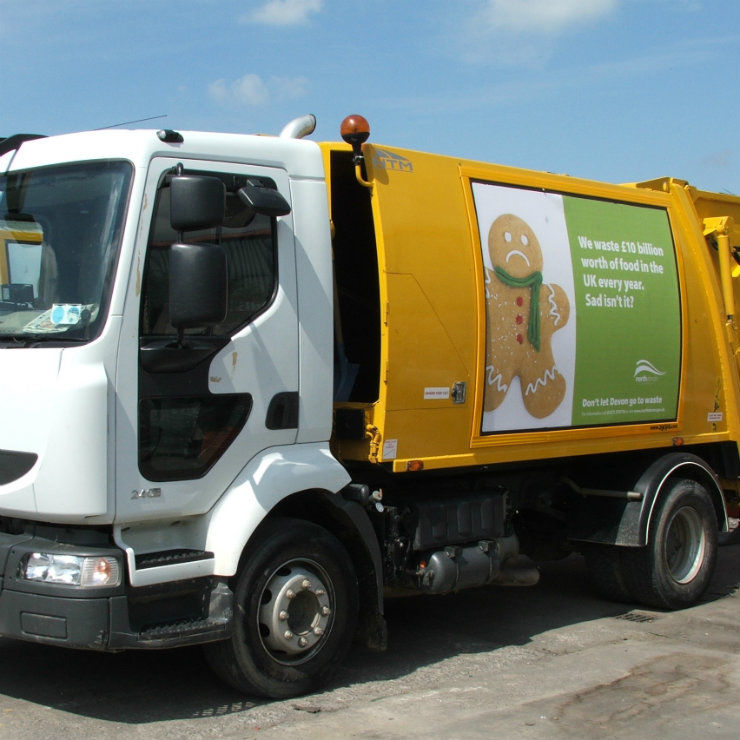 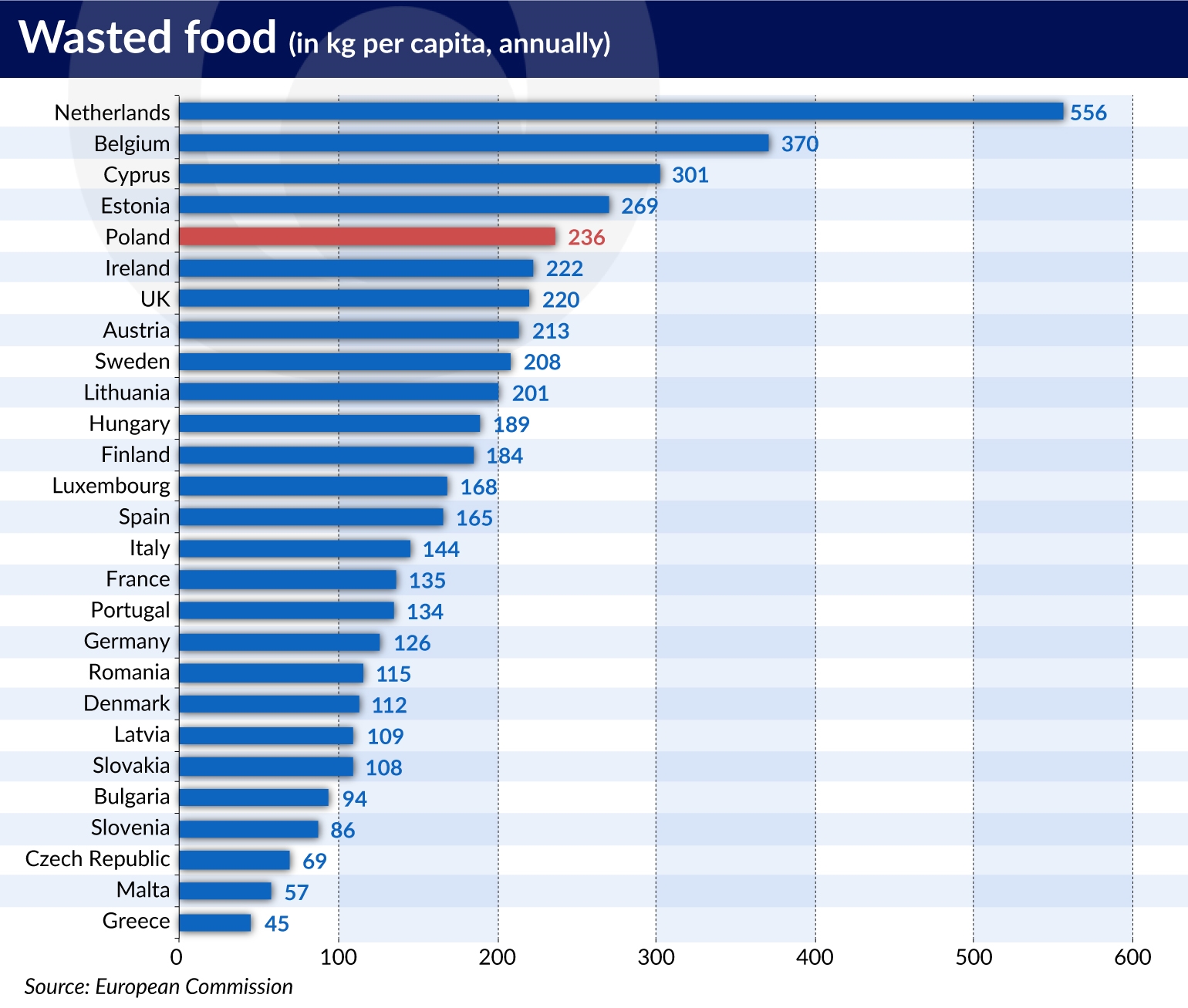 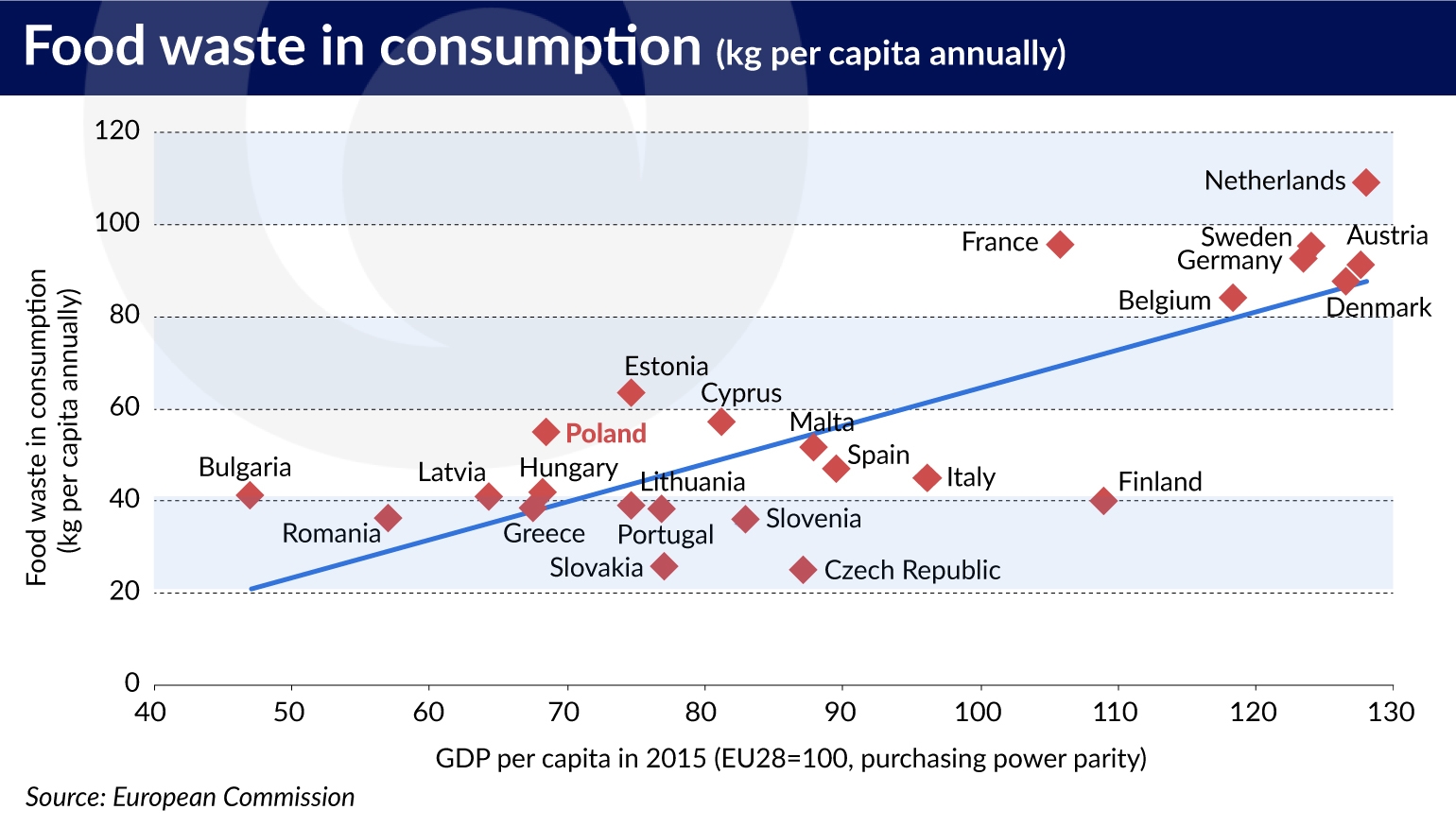