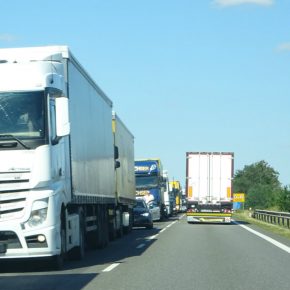 In 2016, road transport’s share of total freight transport performance (ton-kilometers, tkm) by EU operators was 50 per cent and will stay at this level for another 10 years, say authors of the report. In the analyzed period (2008-2016), the share of transport performance by air did not exceed 0.1 per cent, while the share of rail transport was 10.3-12.5 per cent. Inland waterways had 3.8-4.8 per cent of share. Maritime transport’s share decreased by almost 5 percentage points, from 38.1 per cent in 2008 to 33.3 per cent in 2016.

It’s clear that the road freight transport sector plays a key role in Poland’s economy. Over the last decade, the structure of the share of services, industry and agriculture in the total value added has not changed significantly. However, an increase in gross value added generated by the road transport sector is observed. In 2008-2016, in the EU the added value generated by the sector grew on average by 1.7 per cent annually, and in Poland by 6.8 per cent. Transport and Logistics sector (T&L) generated total added value in the economy of PLN115bn (EUR26.61bn).

Over the last decade, the Polish road transport industry has been experiencing dynamic growth due to the opening up of an access to freight transport markets in the EU. PwC has no doubt that the financial crisis shaped the beginning of the last decade. Authors of the report say that one consequence was a reduction in transport performance (total tkm) in the road transport industry in the EU in the next 4 years after the crisis. Eurostat data indicate that the total tkm performed fell from 1.89 trillion tkm in 2008 to 1.69-1.77 trillion tkm in 2009-13.

The increased share of Polish companies in the transport performance was a result of the increased shares in all three fields in 2008-2017 — services carried out in the country of origin of a given carrier, services handling imports and exports of goods to and from the given carrier’s country of origin, exported services such as cabotage and cross-trade, carried out by carriers from a given country in other UE countries. 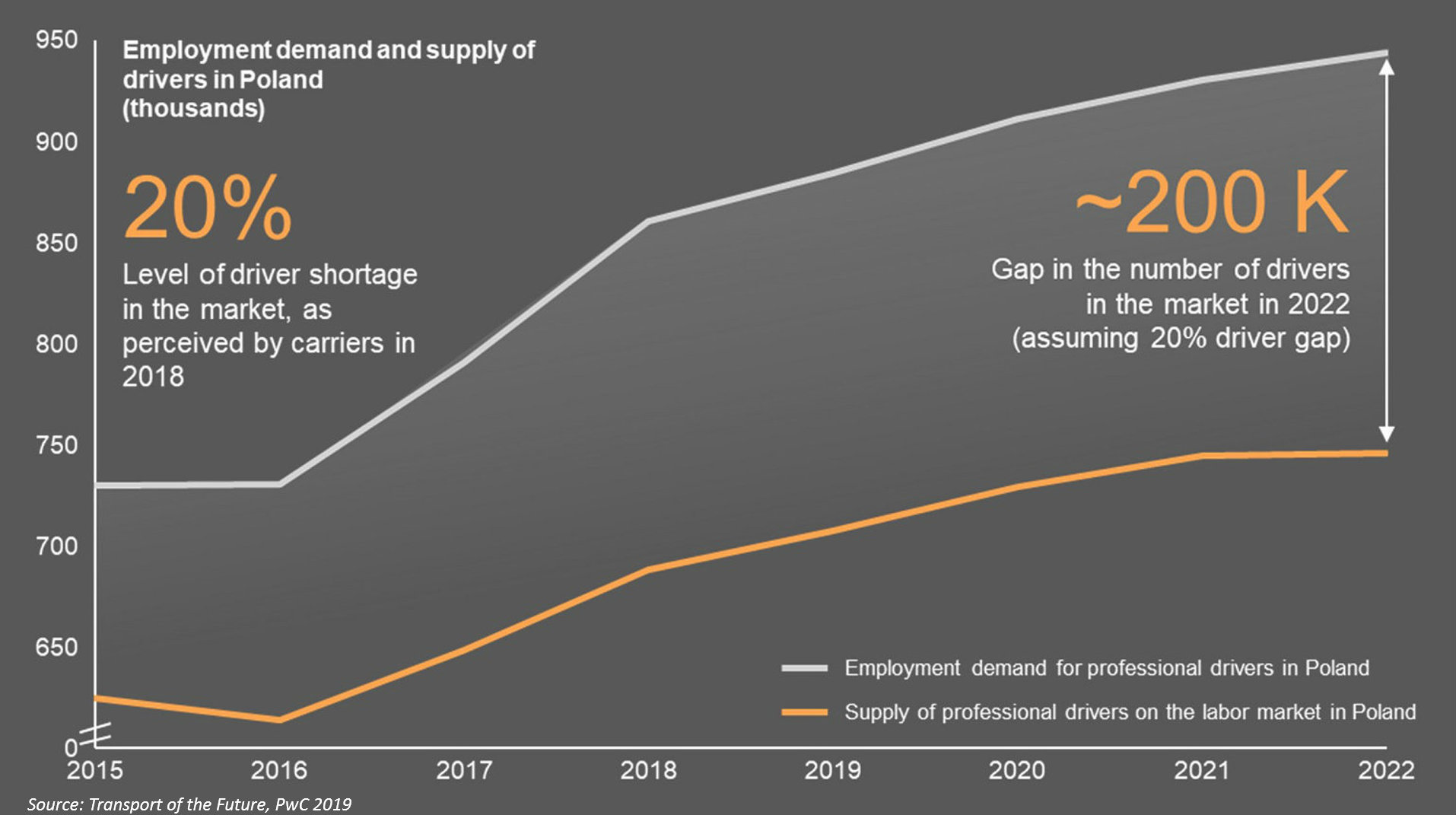 This problem has been noticed by Polish authorities. Since 2016, new vocational schools have started offering a driver/mechanic profile. PwC reports that in the school year 2018/2019 there were 136 such schools in Poland and hopes Poland can expect an increase in the number of people entering the driver’s profession within 3-5 years.

The problem faced by haulers is not only a shortage of drivers with formal qualifications, but also an insufficient level of skills. According to employers, young drivers who are still gaining professional experience generate the largest work quality issues. Therefore, employers are sometimes reluctant to hire them, as they require longer training and even an initial training period with an experienced employee.

The Polish road transport sector will grow in the area of import/export services. The predominant share of the EU countries in the structure of Poland’s foreign trade may, however, limit the ability to diversify revenues. PwC reminds that Poland’s share in the total EU trade in goods is systematically growing – it amounted to 3 per cent in 2008, and increased to 4 per cent in 2017. In 2008-2017, annual growth in the value of trade in goods (i.e. trade excluding services) averaged 6.8 per cent for imports and 8.8 per cent for exports. As a result, from 2015 onwards Poland became a net exporter.

The dynamics of Polish trade depends on the situation in the EU. In the event of an economic crisis, trade with other countries will not be able to completely offset the demand gap. In the next few years, Poland’s total foreign trade (including services) is projected to increase by nearly 7 per cent annually, which will convert into an increase in the tonnage serviced by Polish carriers. Through 2023, annual growth in trade should remain positive.

While the liberalization of access to the EU market for Polish entrepreneurs has so far enabled them to develop their exported transport services, their further opportunities for exporting services will depend to a large extent on the legal and political factors. The introduction of the „Mobility Package” provisions significantly threatens Polish carriers in the area of cross trade and cabotage.

On 4 April 2019, the European Parliament adopted a report on the „Mobility Package”, including specific regulations dealing with the posting of workers, admission to the occupation of road transport operator and to EU markets, as well as social aspects (including working time) and the activities of controlling institutions.

In the long term (2023-2030), Poland perceives these changes as a huge threat to the industry. The new regulations may start to partially affect the market from mid-2020. PwC expects that up to 2022, Polish road transport sector will not be affected by them, but growth after 2022 will certainly be constrained by increased enforcement of compliance with the new legislation.

The steadily growing ecological requirements imposed on engines will lead to changes in the automotive industry. PwC points out that urban logistics has to deal with the phenomenon of growing congestion and its consequences, such as increased emissions of pollutants, CO2 and noise.

In 2016, 96 per cent of heavy goods vehicles in Europe were powered by diesel engines thus there is a huge potential for the use of alternative sources. But their use on a wider scale depends on the availability of refueling and recharging infrastructure. For example, PwC experts assume that the low popularity of bioethanol in Poland in recent years is related to the practical lack of stations where it might be refueled. It is estimated that there are already 646 electric vehicle charging stations in Poland, but this still does not guarantee convenient geographical coverage for electric car drivers.

This is why PwC predicts that in the short term the automotive industry will continue looking for other (non-electric) alternative sources for the heaviest vehicles and that, in real terms, large-scale deployment of such drives will take place within 5 or more years.

Carriers from Central and Southeast European countries pose limited competition for Polish carriers due to the fact that they come from small geographic markets with limited resources. However, carriers from outside the EU (in particular from Russia) are putting pressure on Polish transport companies due to lower costs, including regulatory ones.

PwC points out that there are also internal challenges, as the Polish road freight transport sector is highly fragmented. At the end of 2018, almost 239,000 entities were registered on the Polish transport market, and almost 90 per cent of them (over 210,000) were self-employed natural persons. What is more, as many as 98.1 per cent (234,000) of enterprises employed fewer than 10 people. Companies employing up to 50 people form another 1.6 per cent of the market, and entities with over 50 employees accounted for only 0.3 per cent.

According to the data of the General Inspectorate of Road Transport (GITD), as of the end of 2018, there were almost 36,000 licenses issued for performing international road freight transport. In addition, there were nearly 20,000 permits for performing transport services, i.e. documents allowing for commercial transport in Poland.

The Polish road transport industry did not show a tendency to increase concentration in the past (the market shares of the 20 largest players have not risen significantly in recent years). Industry representatives also believe that Polish carriers do not have a tendency to cooperate and instead opt to operate on their own, even if joining forces could be beneficial for them. But, as PwC experts write, consolidation of the market is unavoidable. 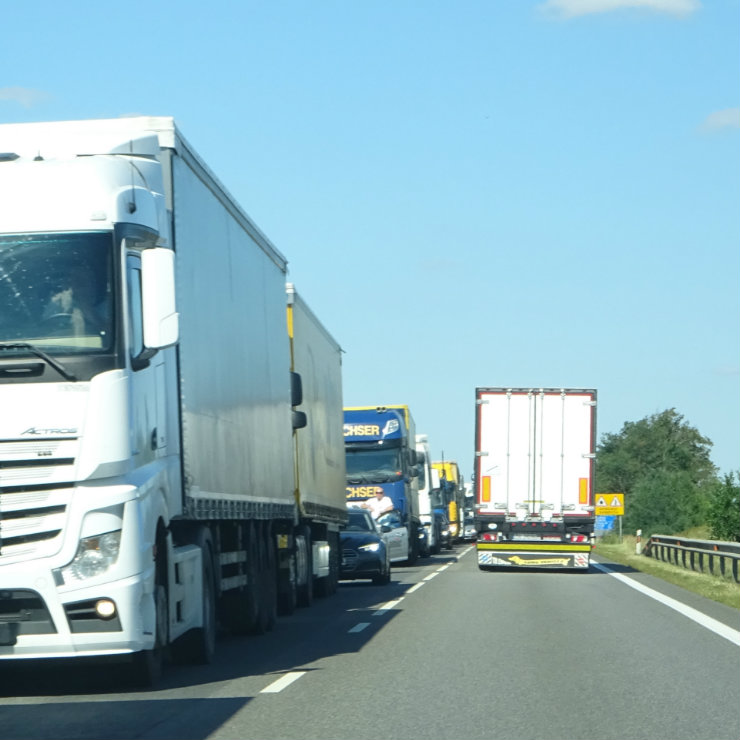