22.10.2020
Russia’s major corporations have been reporting decimated profits due to the COVID-19. Companies in the natural resources sector, the cornerstone of the country’s economy, have gone through difficult times. On the other hand, companies in the Russian tech sector have much more reason for optimism. 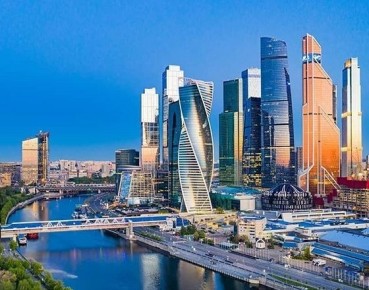 The Russian Federation has been one of the first countries in the world to immediately feel the impact of the pandemic on its economy. Being a key global provider of oil and gas, which, in 2017, added up to a combined EUR700bn in value or 60 per cent of Russia’s GDP that year, the country is particularly vulnerable to massive shifts in price of commodities.

In late April 2020, at the high of the crisis, Ural blend oil sold by Russia was being delivered to the Mediterranean for a price of USD8.48 a barrel, the lowest price since 1998. Although the price of Urals has since then bounced back to just over USD40 per barrel, the month-long period of extremely low oil price was enough to make an immense damage to Russian finances.

And since the oil and gas revenue is such an important component of the Russian budget, the overall health of the Russian economy is inexorably linked to the performance of the country’s key corporations, most of them active precisely in those extractive industries. Needless to say, they haven’t been doing great lately.

According to the Russian financial outlet Finexpertiza, the aggregate profit of Russian businesses (large and medium-sized) in the period covering March —  May 2020 declined by 67 per cent y/y, the deepest drop in at least the last 16 years (the entire period for which statistical data have been compiled). Over the three spring months, Russian businesses made a profit of RUB1.4 trillion (EUR16bn). In March alone, a loss of RUB277 billion (EUR3bn) was recorded, the first time Russian businesses showed a negative financial result since 2015.

Although every single industry has been affected by the restrictions related to the coronavirus, there were still major differences in the extent to which each specific sector was impacted. All Russian industries registered losses in revenues compared to the previous year, but most of them still reported profits, albeit much smaller. But three industries in Russia reported overall losses for the period March-May 2020 — hotels and catering (-1080 per cent), healthcare (-248 per cent) and entertainment (-140 per cent).

Although the hospitality sector has suffered the largest revenue losses out of all sectors of the Russian economy, in absolute terms, tourism is not nearly as significant for the overall health of the economy as the oil and gas sector.

The key pillars of the economy are the corporations in the natural resources extraction and sale business; oil and gas giants such as Gazprom, Rosneft, or Lukoil. Those companies have been seen one third of their market value being wiped out over the course of the last 6 months.

For example, Rosneft, which controls around 40 per cent of Russia’s oil output, lost exactly one third of its market value since the end of February this year. Moreover, the company also registered losses of around EUR1.4bn during the H1’20. The giant already announced that it would not send money in dividends to the shareholders this year.

Another Russian energy giant, and the long-term Russia’s most valuable company, Gazprom, recently announced that its Q2 net income more than halved from the year-earlier period to EUR1.7bn. The income loss was mainly attributed to a fall in demand for gas in Europe, the company’s key source of income. The sales to Europe fell in the first half of the year by 47 per cent. Gazprom also lost more than one third of its market value since the end of February.

Similarly, another key Russia’s petroleum and natural gas extraction company Lukoil reported sales in Q2’20 down by more than 40 per cent. The market value of the Moscow-based energy company fell by more than 40 percent since the end of February.

However, not all Russian large corporations have been affected by the measures related to the prevention of spread of the COVID-19 negatively. Companies in the Russian tech sector have experienced unprecedented levels of growth over the past few month, mirroring a global trend of tech giants from around the world reaping great benefits from the lockdown measures.

In the United States, Amazon, Facebook and Apple have benefited handsomely. Amazon sales soared 40 per cent in the three months ending June, Apple saw surge in purchases of its iPhones and other hardware, and Facebook saw the number of people on their platforms, including WhatsApp and Instagram, jump by 15 per cent, BBC reported.

In China, online purchases on the country’s eCommerce giant Alibaba soured over the past few months. The company said its fiscal Q1 profit more than doubled from the same period a year earlier. The company’s stock value increased by around 50 per cent since April.

In Russia, the country’s largest technological company Yandex saw a record-breaking increase of its market price, passing the USD20bn mark for the first time in history. The value of the company’s stock doubled since mid-March.

And it’s not just the popular search engine company that profited from the current climate. Russia’s second most important tech company, Mail.ru, has also seen its stock price more than double since the market crash in March.

Also shares of TCS Group Holding, the parent company of Russia’s most popular online bank Tinkoff, doubled their value since the end of March. And the software company F5, the owner of the Russian popular software Nginx, saw in increase of stock value of 30 per cent since mid-March.

Interestingly, the current climate might thus help to make the Russia’s corporate landscape at least a little bit more balanced, with companies other than those active in the energy sector representing a larger share of the overall economic production in the country.