Lithuania, Latvia and Estonia are seeking to create an environment favoring entrepreneurship, modern technologies and international talents, and they already have something to boast about.

Over six million inhabitants in all three Baltic states is a small market. Under such conditions, entrepreneurs are by nature forced to expand externally, and investments that can be quickly scaled up in this way are the technology companies.

These include Transferwise, a company of Latvian origin worth more than EUR893.2m that is operating in the area of international money transfers, and also the well-known Skype instant messaging app, the joint creation of Swedish and Estonian programmers. There are many others, such as the loan service Vivus, which is also active in Poland, or Creamfinance, which is considered to be the fastest-growing fintech company in the world, Pocopay, which has interesting solutions addressed to Millennials, offering the opening of bank accounts in several European countries in a matter of minutes, and Monea, which allows money transfers to be made to numbers from a smartphone.

Mintos is a Latvian P2P loans operator that attracts people interested in investing in corporate loans, consumer loans and even mortgages from more than 50 countries. Another company, Fortumo, allows users to make payments in more than 90 countries, and Inzmo is an insurtech offering car, bicycle, and household appliance insurance, delivering mobile solutions to traditional insurance companies (quick loss adjustment is done by sending a photo or movie to an insurer from a smartphone).

The success of the first two companies – Skype and Transferwise – showed entrepreneurs from the Baltic states the scale of possibilities. The roots of the dynamically developing financial sector of technology, which attracts more than a quarter of the capital flowing into the Baltic states, are much deeper.

According to the Report of the World Economic Forum (WEF), the Baltic states are among the most innovative in the European Union, taking into account both the activity of creating start-ups (TEA) and creativity of employees in already existing enterprises (EEA). Among the 28 European countries, the three Baltic states were ranked in the top seven with Sweden, which is an important reference point.

Entrepreneurship is favored by a friendly tax system – the Washington Tax Foundation recognized Estonia as the first, and Latvia as the third country in this respect in the OECD. Personal Incoma Tax (PIT) is linear and doesn’t include return on investment (dividend), the corporate tax is 20 per cent in the case of Estonia and 15 per cent in Latvia, and property taxes apply to land and not buildings. This also contributes to the perception of the region as an area of economic freedom. In Heritage Foundation ranking, Estonia is ranked 6th in the world, Lithuania 16th  and Latvia 20th, just behind Sweden. Maybe that is why Estonia is one of the countries with the highest number of start-ups per capita and the country is one of the most technologically advanced in the world.

Estonian state administration has been using the technology of distributed registries (DLTs) for many years, which is also part of the country’s immunization against cyberattacks of its big neighbor. The expression of confidence in the Estonian level of cyber security was the establishment of the NATO Cooperative Cyber Defense Centre of Excellence.

Estonian citizens’ personal data are located in the cloud to guarantee their immutability and authenticity. PKI smart cards give citizens digital access, they can deal not only with almost a thousand official matters, but also participate in polls and elections – from 2005 via the internet and from 2011 by SMS. In turn, the innovative program called e-resident enables one to obtain virtual citizenship and establish a company, even without a visit to the country.

Estonia is also a country of digital payments – according to the World Bank, 99 per cent of settlements are digital, and the number of bank branches per 100 thousand citizens (11.2) is much lower than in the Eurozone (27.2). Estonia was one of the first countries to provide Wi-Fi in public places.

The level of education in mathematics and science is comparable to the Finnish level, and since 2012, HTML programming has become compulsory in primary schools. Originating in the Soviet era, the Tallinn Institute of Cybernetics is a center of computer science and a provider of human resources for the fintech industry.

Constantly developing, the innovation and startup ecosystem in Estonia is well received – 66 per cent of start-up founders assess it positively in comparison to the world average of only 25 per cent. However, restrictions resulting from the limited size of the internal market mean that they have an average of 60 per cent of foreign customers in the early stages of development.

The problem is to obtain talent. All the Baltic states have experienced a huge – for the size of their populations – wave of emigration of up to 20 per cent. In Estonia 24 per cent of technological workers are foreigners, but only a 50 per cent share (as in London) would satisfy demand for programmers and developers. Institutional solutions are needed. In January, a special visa program for start-ups was launched, enabling non-EU citizens to work in Estonia or transfer existing companies to the Baltic. These start-ups may also be qualified for growth accelerators such as Buildit Hardware Accelerator and Startup Wise Guys Business Tech. In 2016, a new support fund for the sector was established – EstFund, is the first such entity in the region with the European Investment Fund – the total amount is EUR60m (there is also the EIF Baltic Investment Fund, addressed to the SME sector in the Baltic States with a capital of EUR130m).

There are more government funds. There is also a network of Estonian business angels with more than 100 members. In 2015, almost EUR89.3m was invested in start-ups and the projected annual growth rate of investment to 2021 exceeds 20 per cent.

Riga is competing with Tallinn in the field of financial technology and attracting capital and talent. Latvian investments in the sector are much higher – in 2016 they exceeded EUR625.3m. Latvia’s specialty is payment and loan solutions, also using blockchain technology, which Bitfury specializes in. In turn, Swipe, founded in 2015, offers a mobile billing and payment system to sales networks in 40 countries and in 13 currencies. A private Latvian bank, Rietumu, has strongly engaged in supporting fintech companies, and every year, it motivates the start-ups with its FinTech Challenge competition. This gives a chance to develop and attracts start-ups to venture capital.

The Latvian ecosystem is also a magnet for large financial groups – the banks SEB and DNB have their operational centers there, and the Nasdaq/OMX group has consolidated its Baltic operations in Latvia. Latvia has much to boast about – it occupies third position in the OECD in terms of providing access to fiber-optic broadband internet (60 per cent of users), has a very high level of education for the working-age population (41 per cent) and 70 per cent of citizens under the age of 40 speak English.

Towards the end of last year, the parliament passed a special visa program for start-ups, which provides tax relief for professionals in the technology sector, who can receive additional monthly support (EUR252), while people with PhD receive reimbursement of social security and tax expenses (from a government fund co-financed by the EU).

The new law applies to start-ups not older than 5 years, with revenues of no more than EUR200,000 during the first two years of activity. This is to reduce the financial risk and operating costs for young entrepreneurs.

Lithuania was the last to join the start-up system and technology companies, but it is doing so at a rapid pace, a symbol of which is the establishment of the first regulatory sandbox in the Baltic states. Recently, fintechs with a capital of EUR1m can obtain a license for payment services and electronic money in just three months. This is accompanied by access (thanks to the corresponding Application of the Lithuanian Bank) to the Single Euro Payments Area (SEPA) system, and fintech customers can use IBAN numbers under this solution. The central bank also committed itself to providing, within a week, a preliminary response to the licensing process. It is possible to apply for a license without starting a business (the company has 6 months to do it), which means no need to freeze assets.

In turn, the „Newcomer” program makes it easier for fintechs who already have a license in another EU country and want to relocate to Vilnius. Crowdfunding rules have also been regulated – investors can invest up to EUR1,000 within one financial platform within one year without tax consequences (this issue is not settled in Poland). Video-verification of customer identities is also possible, and 45 Lithuanian market regulators have agreed not to apply sanctions to technology companies in their first year of operation. This also applies to taxes.

The intention of the Lithuanian authorities is to increase competition in the financial sector, where 90 per cent of the market is controlled by the oligopoly of three Scandinavian institutions: SEB, Swedbank and DNB. New solutions are also expected to attract foreign fintechs – a British neo-bank, Revolut, which operates in the area of P2P payments and loans, has settled here, as well as the Israeli company Moneta International, which provides solutions in the area of e-commerce payments.

Israeli entities seem to be really important to Lithuania because it is promoting institutional solutions. Lithuania would also like to welcome the companies that may leave the UK after Brexit. In this context, the letter of the Lithuanian MEP and famous poker player, Anastas Guog was addressed to several hundred British fintechs a week after the referendum, with an invitation to Vilnius.

The Finance Minister repeated it emphatically at the Innovate Finance Global Summit in London in early April, not hiding Lithuanian aspirations to be a regional fintech hub. Barclays Bank is one of the four global technology centers in Lithuania, and is developing the Rise project in Lithuania.

There are many more growth accelerators. All of this attracts businessmen and IT specialists from Russia, Belarus and Ukraine, and the value of investment in the technology sector exceeded EUR893.2m last year.

When looking at the dynamically developing Baltic area of financial technology, one cannot help but be struck by the fact that Lithuania, Latvia and Estonia are largely competing with each other. There are no common initiatives whatsoever – if they were there, the bidding power of the Baltic States would have been much larger, and the results would have been more spectacular.

Category: Financial markets 25.10.2019
The activity of the financial technology companies has become a permanent feature of the global financial system, and an average of 64 per cent of consumers have used their services this year. 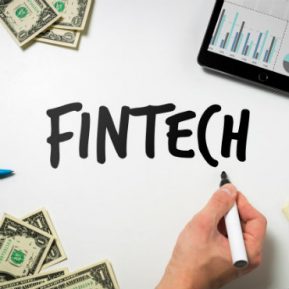