The NBP Economic Institute: Inflation will take longer to return to target 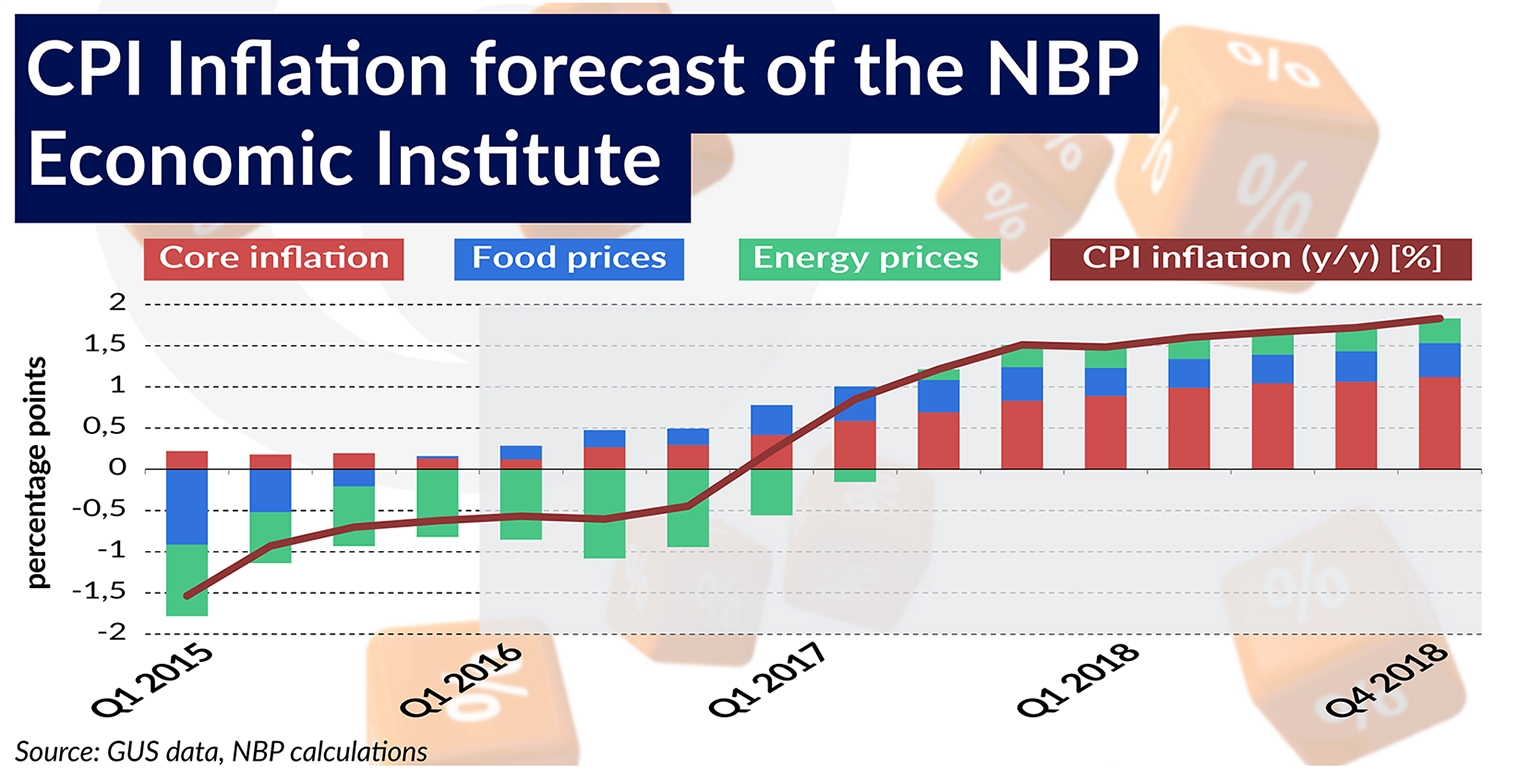 Inflation in Poland should reach 1.5 per cent in the Q3’2017, i.e. the lower band of deviation from the 2.5 per cent inflation target.

The target itself is not within reach before the end of NBP’s new projections. Since a 2.5 per cent CPI was recorded in early 2013, this means that inflation will have been too low for a minimum of six years. The main culprit is the condition of the world economy.

“A new word has been coined: spillback. Thus far, there was talk of spillover i.e. the negative impact of one economy on another, but spillback goes one step further: the fact that something is happening in the United States has an impact on emerging economies, but what is happening with them also has an impact on the American economy. What the Federal Reserve is doing, i.e. the tightening of the monetary policy and the associated appreciation of the dollar, has a negative impact on some of the emerging economies, especially those indebted in dollars. Because their growth decreases and the perspectives of the financial sector deteriorate, it also has a negative impact on the American economy. And everyone is more and more aware that it is a system of communicating vessels,” explained Jacek Kotłowski, PhD, the Deputy Director of the NBP Economic Institute during the presentation of the „Inflation report. March 2016”.

NBP economists anticipate that the cycle of rate hikes which started in the USA may turn out to be the shortest one in history. They are also pointing out that while Russia, India and the countries of South America are fighting inflation, and the rest of the world is struggling with deflation, GDP growth projections for all these regions predict an unprecedentedly flat growth curve with hardly anyone standing out. This even applies to China. Debt in that country has exceeded 200 per cent of the GDP and foreign exchange reserves are falling sharply, even though over the years they just kept growing. Now, however, investors are withdrawing, and the markets are losing faith in the notion that China is ruled by miracle-workers.

“In the case of emerging countries we can say ex post that they were overly reliant on credit expansion in order to defend themselves from a growth rate slowdown. This was the case with China. Never before in economic history has a country, or its private sector, indebted itself as quickly and on such a large scale. This has allowed to maintain growth rates and the prices of raw materials in the world for a number of years, but was also a factor which has probably prompted other emerging countries to also use credit expansion to sustain their growth,” said professor Andrzej Sławiński, Director of the NBP Economic Institute.

“It is also the case that everyone has a fresh memory of what happened: the global banking crisis and the financial recession impact on different economies. And this is one of the reasons why consumption in the developed countries is growing at a moderate pace, despite such a decline in the oil prices,” he added.

This global stagnation is often referenced in the March inflation projection. It is helpful in explaining the difficulties in predicting the scale of oil prices decrease that we have experienced. NBP economists have devoted a special box in the report to this issue.

They defend themselves by reminding their readers that in November 2014 the futures market, which all the central banks are observing, was pricing oil at USD90 per barrel, and the so-called 90 per cent confidence interval had its lower bound at around USD60. No one predicted USD30 per barrel in February 2016.

This is an important issue, because oil prices directly translate into inflation levels in Poland. The NBP calculated that since December 2013 the cumulative decline in the prices of fuels has cut the rate of CPI inflation by up to 1.3 percentage points. Significant cuts were also required in comparison with the inflation projection from November 2015.

Back then it was assumed that the central path of the CPI inflation would be +1.1 per cent in 2016. It is now at minus 0.4 per cent, which means an entire year with deflation. Full-year inflation will only reach 1.3 per cent in 2017, and the figures for the fourth quarter should reach the much awaited level of 1.5 per cent.

„The main reason for the changes in the forecast are the strong drops of the oil prices on the world markets and the changes in the domestic administered prices affecting the level of domestic energy prices. The downward revision of the CPI inflation is also a result, although to a lesser extent, of the lower-than-expected food prices and lower cost pressure from the domestic labor market. Between the projections oil prices have declined from almost 50 dollars a barrel to the current level of about 30 dollars,” states the March report.

The Economic Institute is defending the thesis, however, in the case of Poland it talks about „good deflation” – one that does not adversely affect the economic growth. Besides, the GDP growth forecasts were raised. In November, growth at 3.3 per cent was projected for this year and at 3.5 per cent for the next. The current GDP growth projection is 3.8 per cent  for both years.

The change is mainly due to the ”Family 500 plus” program entering into force (child benefits program for every second and subsequent child), which will have a big impact on consumption. It was assumed that half of the funds from the program will be used for consumption. This will increase the GDP by about 0.3 per cent this year (the program entered into force in April 2016) and by 0.5 per cent the next year.

„In addition to the increased family spending, national economic growth will be stimulated by an increase in disposable income associated with the increase in wages, low fuel prices and historically low levels of interest rates. On the other hand, domestic demand may be limited – thereby reducing the positive impact of the above factors – by the increase in the cost of loan servicing resulting from the introduction of a tax on some financial institutions,” the report says.

By definition, the inflation and GDP projection does not predict the changes in interest rates and legislative changes before they become a reality. It should be noted, however, that the report lists „possible government actions aimed at the reduction of the deficit in the years 2017-2018” among the risk factors for the GDP and inflation path described above.

It was explicitly mentioned that this refers to the possibility of the government’s withdrawal from the announced reduction of the basic VAT rate starting from 2017, or even its possible increase. Any possible increases in the excise duty on fuels or the announced tax on retail sales would also decrease the consumption growth rate and, consequently, the GDP growth rate.