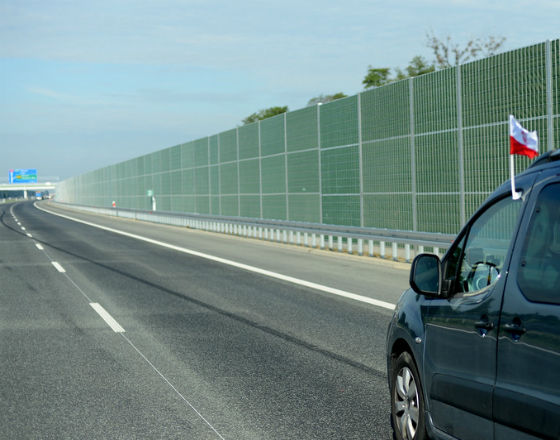 160 billion euro is the sum recently announced by the Deputy Prime Minister and Minister of Infrastructure and Development, Elżbieta Bieńkowska, regarding investments in Poland under the new EU budget perspective. This amount consists of not only „our pool” from Brussels, but also our own contribution, which we need to supply to make full use of the money.

We have the most experience in spending money on roads and in the new perspective this will also be a priority. Annex 5 to the National Road Construction Programme for 2011-2015 provides for the construction of 700 km of expressways for 35.7 billion PLN. For many local communities, however, Annex 6 will be more important, as it plans 12 new ring roads with a total length of nearly 150 km for a total of 4.7 billion PLN. Ring road construction is much more difficult and more expensive than building an ordinary road in fields, so this task will not be an easy one.

In the proposed Partnership Agreement specifying the conditions for spending money from the new EU budget perspective, the government decided to allocate 10.5 billion euro from the European funds to roads and another 10.5 billion euro to railways. Significantly, during the conference at which this was announced the list of roads was presented in detail, but only one sentence was said about the upcoming „full-scale modernisation of 500 km of railways and the commencement of operation of Pendolino trains.”

„The lack of details in the case of railways is no surprise to me, because while funds for roads from the last perspective have been almost completely used up and preparations have been made for new investments, some railway investments using the funds granted for 2007-2013 are only just starting now”, says Michał Beim, transport expert from the Sobieski Institute. „Experience shows that projects funded by local governments are more effectively implemented than those proposed by the central administration”, he continues.

According to Eurostat data, Poland has the second highest usage of passenger cars in the EU after Lithuania, which is detrimental to the environment, local labour markets and economic growth. Under the Partnership Agreement, the Polish government proposed a 50/50 division of funds for roads and railways, however, the European Commission would prefer that more funds be allocated to railways. Negotiations will be held throughout the first six months of 2014. 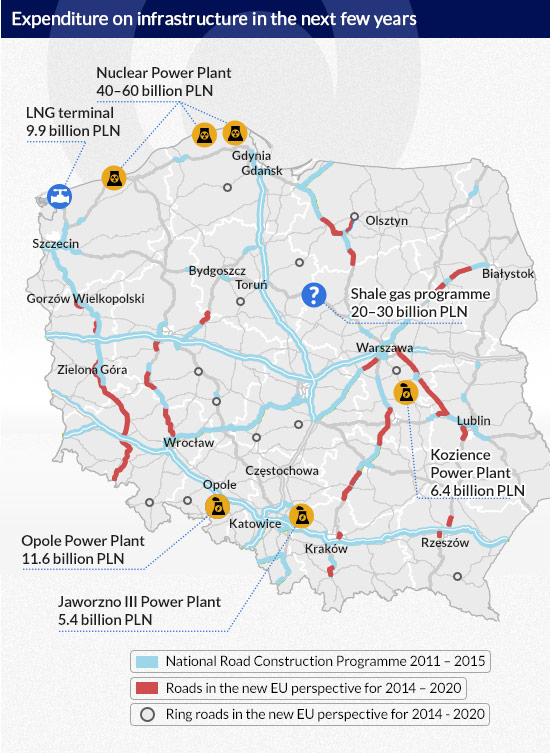 I will take gas in any form

The construction of Świnoujście LNG terminal at a cost of almost 10 billion PLN is to be completed at the end of this year. Until 2024 it will accept the more expensive LNG from the Qatar contract, but in the longer term, having such a facility opens us to the entire LNG market, in which prices should go down after the USA secures energy independence.

Regardless of the supply of LNG, companies in which the State Treasury is a shareholder, i.e. PGNiG and Orlen, should continue to look for shale gas. The Ministry of the Environment hopes that after passing the shale gas act and an acceptable act on hydrocarbon tax, the two companies will be joined by foreign investors. Last year their enthusiasm significantly dwindled. Only 13 out of 41 drills planned for 2013 were performed, four of them by PGNiG and four by Orlen Upstream. This year Orlen also plans four drills, but PGNiG plans as many as 32, although most of them concern traditional gas. In order to talk about the profitability of shale gas in Poland, over 200 drills need to be performed, therefore, investors have a long way to go.

Much sooner, on February 1, development works at Opole Power Plant are to commence (cost: 11.6 billion PLN). Marek Woszczyk, the new PGE CEO, ensures that the first new unit will be commissioned in Q4 of 2018 and the second in Q1 of 2019. The two blocks are to have a total power output of 1,800 MW.

Last year the Government Information Centre calculated that „power units are being built or will soon be built in Turów, Opole, Puławy, Blachownia, Stalowa Wola, Jaworzno, Kozienice and Włocławek. All projects should be launched in 2015 at the latest, and finished by 2020. Their total output is about 7000 MW, and the total net value of the projects is 30 billion PLN.”

According to the government announcement, 100 billion PLN in total is to be allocated to the power industry. At least 40 billion PLN for nuclear energy, at least 5 billion for extraction of shale gas and the largest amount, 55-60 billion on new power units and transmission networks, including the LNG terminal in Świnoujście and oil terminal in Gdańsk.

The 40 billion PLN for nuclear energy is the lower range of the cost estimates for the construction of the first Polish nuclear power plant. The upper range is 60 billion PLN.  Its construction is to be finished by 2024. At least this is the assumption of the Polish Nuclear Power Programme recently (January 28, 2014) accepted by the government. However, only a page later, the same document states that „according to documents prepared by the IAEA, the introduction of the nuclear power industry requires 10 to 15 years of preparation works, including construction of the first plant.” Even if the location and technology for the power plant is chosen this year (and before the government meeting the commissioner for nuclear power, Hanna Trojanowska, spoke about the end of 2016), after adding 15 years for the preparation works the deadline will be 2029.

Such an expensive and prolonged investment is a problem, because the law prohibits funding of this type of expenditure from the state budget. It must be done by companies remaining under state influence. Tauron, Enea and KGHM have already entered an arrangement with PGE to buy shares in PGE EJ1 – the special purpose vehicle set up to build the first power plant (ultimately we are to have two). The problem is that even the combined forces of the largest Polish companies are not enough to finance such an expensive venture. Banks will most likely refuse to grant loans for these investments.

„It is expected that the nuclear power plant will cost 60 billion PLN and a full return on investment will be achieved in 30-40 years. To this end, 1MWh energy should cost 300-350 PLN. Today, the energy exchange sets its price at about 170 PLN and this amount must be entered by bankers into the spreadsheet. When they do, it will turn out that any loan is out of the question, because it simply does not compute,” explains Professor Konrad Swirski from Warsaw University of Technology, who worked on dozens of implementations of research works in power plants in Poland, USA and Asia.

The government document states: „Given the current situation in the electric power market (low wholesale prices, low prices for CO2 emission permits, low growth in electricity demand) and the impossibility of forecasting prices in the long term, which also carries a considerable degree of uncertainty regarding the regulatory sphere (including at the European level), the construction of any new generating unit – coal, gas or nuclear unit – is a difficult issue. „

If the government is determined and wants to ensure that the power plant is built, contracts for differences may be a solution. These are long-term contracts with guaranteed energy prices, which are also mentioned in the government’s strategy. When the market price is lower than the guaranteed price, the government pays producers the difference, and if it is higher – the difference is returned by the producer. In practice, this means the first case – that the government could provide support from the budget for the producers constructing the plant, and not expose itself to accusations of granting public aid, which is prohibited in the European Union. The idea is being ​​tested by the British, but for the time being it is stuck in Brussels. Therefore, it cannot be assumed that the European Commission will enthusiastically welcome the evasion of EU law in the case of the Polish power plants.

Skeptics say that in such circumstances the nuclear energy vs. shale gas dilemma could turn out to be false, because these two great projects will remain nothing but declarations for years from now. „As regards shale gas, the uncertainty is large, the two projects are expensive. Nuclear energy may trigger social emotions,” ponders the new Environment Minister, Maciej Grabowski, in an interview with “Bloomberg Businessweek” (No. 3/2014). Therefore, the government does not seem to be deciding on anything.

Refraining from taking any decisions does not have to be the worst tactic. The Polish energy policy is most affected by the climate policy of the European Union, and this is constantly changing. On January 22, the European Commission proposed a rather sharp 40 percent reduction of CO2 emissions by 2030 (from the levels of 1990) established at a national level and 27 per cent share of energy from renewable sources in the entire EU. The approach of promoting renewable energy sources could, however, change with the next European elections, or for example, as a result of the disappointing economic performance of the EU, the group of countries demanding the suspension of the climate policy could grow. This is not the most likely scenario, but in the case of long-term investment in the energy sector, even this must be taken into account.

Category: Business 29.04.2020
Good quality infrastructure means more safety, less burden for the environment, more efficient provision of public goods and services, better jobs. The decision on whether to invest in good or poor infrastructure determines to a large extent the success of the fight against the looming climate crisis.

Category: Business 31.03.2020
At the end of 2018, the value of foreign direct investments (FDI) carried out by Polish companies amounted to USD28.5bn. Poland ranked third among the countries of Central and Southeast Europe (CSE). Companies from the Czech Republic and from Hungary invest the most. 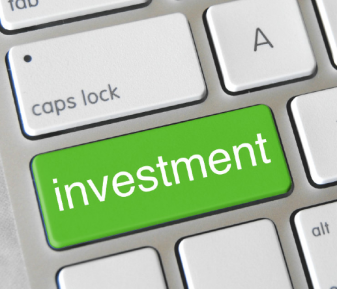