Colonial trading stations instead of factories in Ukraine

23.05.2016
The western companies that come to Ukraine concentrate mainly on exploitation of the country’s raw materials and not on innovation. 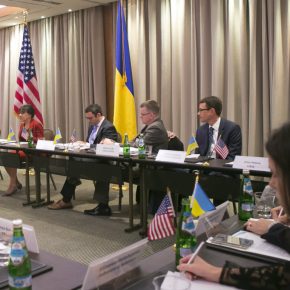 The Ukrainian government is counting on millions of dollars of Western FDI which is supposed to put the ruined economy back on its feet. However, the companies that will come will concentrate mainly on exploitation of the country’s raw materials and not on innovation. According to a study of the European Business Association (EBA), Ukraine’s Investment Attractiveness Index reached 2.56 points in 2015 on a scale from 1 to 5. That’s slightly better than the previous year – the level of general dissatisfaction of investors was 8 per cent lower than in 2014. 16 per cent of companies indicated a slight simplification of customs procedures, 11 per cent stated that doing trade had become simpler but the basic problems that continue to be is the pressure of tax authorities and the pervasive corruption.

Russia at the top

The Ukrainian ministry of economy informed that in 2015 between USD2.5-3bn of FDI flowed into Ukraine. Despite the ongoing war and unstable political situation, appetites in 2015 are greater – Kiev is counting on USD5bn. According to the State Statistics Service of Ukraine, the total foreign direct investment calculated from the beginning of Ukrainian independence in 1991 to the end of 2015 reached USD43bn and is not growing in relation to previous years.

Paradoxically – despite the pro-western economic and political course declared by the ruling group around President-oligarch Petro Poroshenko – the leader of investment growth in the Ukrainian economy in 2015 was Russia, who is occupying Crimea and conducting a proxy war in Donbass through the separatist militias that it controls. Russia’s investments rose from USD2.7bn at the end of 2014 to USD3.4bn at the end of 2015. Only two other countries – the Netherlands and Hungary – increased their level of investment in the Ukrainian economy.

However, it is hard to speak of investment attractiveness of Ukraine, when as much as every third dollar entering the country from abroad comes not from companies that see their future in Ukraine and are prepared to take a risk, but from those that are very dependent on the political arrangements of the funds of the European Bank for Reconstruction and Development.

Francis Malige, executive director of the EBRD for Eastern Europe and the Caucasus, makes no secret of the fact that investment is directly dependent on purely political issues.

“In 2015 we reached a threshold of EUR1bn. We will try to act so that the indicators are the same this year. That is our “investment capacity”, more or less as much as we can invest in Ukraine, but the success will be dependent on the harmonious work of all branches of government and the existence of reforms. It is essential that all three branches of government, i.e. the president’s administration, the council of ministers and parliament, work together,” Malige commented in the middle of February.

As things stand, the EBRD has announced its readiness to invest USD200m in the Ukrainian agricultural sector in 2016.

Prospect of profits, no compensation for risk

Economic experts have no problem indicating who is to blame for the fact that real investors worthy of the name are not flocking to Ukraine.

As Andriy Novak, head of the Committee of the Economists of Ukraine, remarks, for investors the three most important issues are profitability, safety of running business and development prospects.

“Of these three conditions, only one is fulfilled in our country: profitability. Indeed, in most sectors of the Ukrainian economy one can achieve greater profits than in the same sectors in European countries. However, the remaining two conditions are not fulfilled. How can an investor calculate the development prospects of his business in Ukraine if he cannot write a realistic business plan even for one year, when in the course of the financial year there are changes in the tax and customs laws, changes in the administrative and credit policy environment? Our banking system was long ago recognised as one of the worst in the world. The government and the central bank have no economic strategy,” concludes the head of the Committee of the Economists of Ukraine.

Oleg Ustenko, executive director at the Bleyzer Foundation, which analyses the economies of post-soviet countries, is sceptical about the assessment of Ukraine’s investment opportunities.

“Incoming investment was USD1bn last year, in other words, virtually nothing. We had times when the Ukrainian economy received amounts of foreign direct investment to the order of USD10bn. It is tragic that billion dollars was siphoned mainly into the banking sector. We can’t say that this was real investment which went into Ukrainian industry or agriculture,” he commented in an interview for the news service Obozriewatiel.

According to Ustenko, Ukraine’s situation is exacerbated by the unfavourable situation in global markets: the slowdown in China, the problems of Brazil and Venezuela, and also the situation in the Middle East, which means that investors will avoid markets exposed to risks such as the ones that Ukraine currently faces. Between 2016-2017 one can expect a real struggle for international capital.

“The winner will be the country that can offer better conditions,” concludes Ustenko, noting that with its system of corruption and colossal administrative barriers to business, Ukraine will have practically no chance.

Will they stimulate the economy or not?

“Foreign investment in Ukraine to a large extent is considered to have a positive effect on the country’s balance of payments, but at the same time it practically does not create new economic potential. It is directed mainly at the services sector, while investment in industry is mainly oriented towards raw materials or the production of low added-value goods,” assesses Svetlana Kovalevskaja, expert at the Institute for Social and Economic Research.

Data from the ministry of economy, which show that only 30 per cent of foreign investment goes to industry, confirm this opinion.

Why don’t new technology and innovative capital come to Ukraine? The economist Vladimir Rapoport reflects on this on the pages of the Krajina Liberalna website and comes to the conclusion that it is the fault of the untouched Ukrainian oligarchic system that has even been strengthened after the overthrow of Viktor Yanukovych, in which the most profitable investments are… in bribing officials.

“Researchers say that the more complex the production, the better the institutions that it needs. But in Ukraine everything is upside down. Confusing legislation, wild procedures, the wilfulness of officials – they can always force you to pay more tax, impose a fine, place seals on the doors to the production department or accounts department, or seize documents and servers. The main profit is from investing in officials and not in technology. That’s why those who can afford to run an efficient business run enterprises with long-known technologies and sales markets. Ore and metal, wagons and pumps, ammonia, cement and grain – these were on the market as long ago as the 1930s. How, what and where are known factors.

New branches of the economy need daily creativity. In order to compete on these markets one should constantly search for new solutions, all one’s possibilities must be directed towards searching for and implementing new technology, materials, products, and not pushing one’s MPs, officials and judges. Whoever knows how to work in a modern market does not want to have anything to do with our realities,” argues Rapoport.

The West places its bets on export

As a result, really only two groups of investors remain in the Ukrainian market today – the oligarchs, who have perfected the art of buying officials and filling state positions with their own “staff”, and foreign hunters of raw materials – capital that instead of investing in development, focuses on the creation of  trading posts known from past centuries. Their task is to ensure the efficient sourcing and exporting of natural resources out of the country.

Rapoport’s thesis was confirmed recently by Geoffrey Pyatt, US ambassador in Kiev, who during a forum on security taking place in the Ukrainian capital in February argued that Ukraine will be able to count on the presence of hi-tech US arms companies only when it successfully fights corruption and implements real reforms in the economy leading to a situation in which entrepreneurs “will see only business risk and not the risk of an unpredictable environment”.

At the moment, Ukraine can boast the signing of an agreement to build the first US trading post. In February 2016 the company Cargill signed an agreement with the Ukrainian firm MB Cargo under which it will invest USD100m into the expansion of the port in Yuzhne near Odessa and the construction of a grain terminal there with a loading capacity of 5 million tonnes per year.

“Here it is not just about money, but about 350 new jobs, hundreds of millions of hryvnia in tax to the budget, and national income from the export of grain,” Andrei Pivovarsky, minister of infrastructure, commented on the signing of the deal.

Today Cargill has a stake in the agricultural holding company UkrLandFarming, wielding 645,000 hectares of Ukrainian agricultural land and several sunflower oil mills. In the next three years the American company has the opportunity to seize a sizeable portion of 300,000 hectares of land against the debt of the agricultural holding Mrija (Cargill, through its fund CarVal Investors, is a part of the committee of creditors controlling a total of 15 per cent of the endangered bonds of Mrija with a maturity in 2016 and 50 per cent of the bonds with a maturity in 2018). The Ukrainian agricultural holding does not have money to meet its liabilities, so most likely it will end in the takeover of the company’s agricultural land by its creditors.

Investment in a grain terminal in Yuzhne would allow the Americans not only to export their production without regard for the Ukrainian government and the oligarchs who control the sea ports today, but also to seize control  of the lion’s share of Ukrainian grain exports. The port’s capacity of 5 million tonnes of wheat is the same amount as that which was exported from Ukraine between July and October 2015. On its part, Kiev has promised to expand the railway lines leading to the port to make it easier for the Americans to export Ukrainian grain. 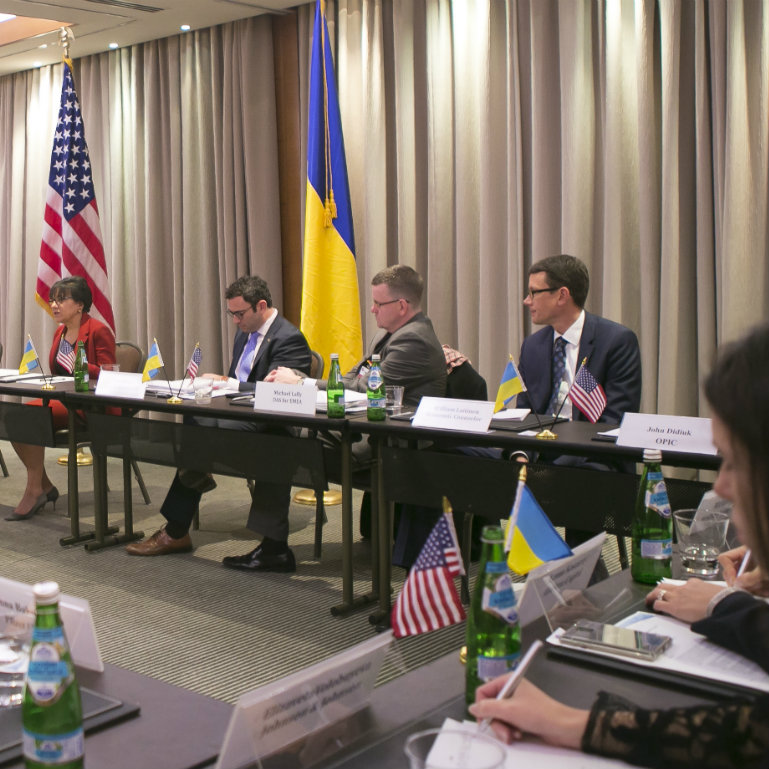