25.01.2019
Pelješac Bridge is a planned and unfinished bridge that should connect the Gulf of Mali Ston between Komarna and Brijesta on Pelješac in the Dubrovnik-Neretva County. 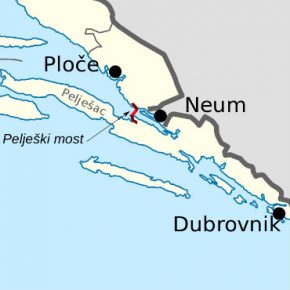 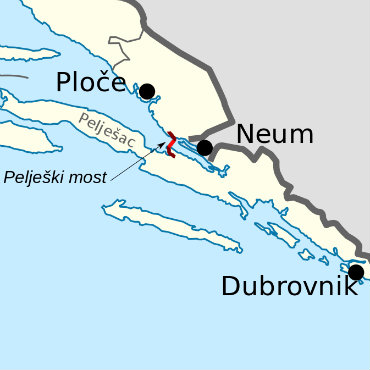 Construction of the bridge began in 2007, but because of the global crisis, it was halted by the government in May 2012. The design and construction of the Pelješac Bridge is a major challenge: the 2,400-meter range is the second European range for suspended bridges, the foundation conditions are extremely bad: the location of the bridge is subject to strong winds and to a great seismic activity. The foundations will be 100 meters below the sea level. The continuation of sea-based works will be determined upon the completion of investigative works and the development of the final geological and geotechnical report. On April 2018, the construction contract with the Chinese company „China Road and Bridge Corporation” was signed. The European Commission has approved a grant of EUR357m or 85 per cent of eligible costs estimated at a total of EUR420m.

The Chinese involvement in the bridge construction brings many questions. Some EU officials in Brussels are not satisfied with a Chinese company entering the EU market. They believe that such entry may hurt the competition, lead to wage reductions and breaches of labor law. The reason for concern is justified by the fact that this company has won a tender by offering less than the next competitor. This is the reason why the European Commission is examining whether the tender was in accordance with the EU regulations on fair competition.

After the Chinese company won the tender, Austrian company Strabag complained. Their argument was that the Chinese made the final bid, which, when deducting wages to workers, is lower than the value of the project. The Croatian court rejected their complain. The Chinese company brought its workers at the beginning of July 2018, which caused a large overflow of accommodation facilities in the surrounding areas, and a part of the workers was placed on a cruiser that was turned into a hotel. All this did not concern Croatian authorities, which were saying that the bridge is not built from credits or other forms of debt and that they, regardless of this project, want to deepen their ties with China. One example of their co-operation is a joint work of Croatian and Chinese police in Dubrovnik, due to the large number of tourists from China. In addition, Croatian authorities plan to host the Economic Forum 16+1, involving 11 EU countries, five Balkan countries and China.

Chinese government has long been interested in Croatian coastline. It is a part of Mediterranean that is most deeply penetrating the European continent, especially the Central Europe. Chinese government intended to become the biggest economic partner of Croatia, after Chinese president Hu Jintao visited Zagreb in June 2009. China wants to open the transport corridor through Rijeka with a credit line of USD10bn to develop the port, build the railway, finance the opening of several industrial zones, and strengthen cooperation in tourism and medicine. They expected 40 per cent more traffic and 25 per cent more revenues for the Port. Then Prime Minister Ivo Sanader abruptly withdrew from the talks with Chinese with an idea that EU will contribute to the port development. Now, the Chinese are back, entering the tender for a bridge that is being constantly contested by the Croatian neighbor Bosnia and Herzegovina.

Bosnia and Herzegovina has some 25 kilometers of seaside and Neum is the only town there. Historically, in 1699, the Dubrovnik Republic gave this tiny strip of land to the Ottoman Empire only to be physically divided from the Venice Republic. Neum remained in Bosnia afterwards and continues to divide Croatian territory in two halves, whereas the Dubrovnik-Neretva County has no direct connection to the rest of country. With the bridge Croatia wants to unite its two territories, but Bosnian politicians are questioning this move and rejecting it, because for them it’s a blockade of access to the open sea. However, Chinese arrival may also boost the Bosnian economy.

Croatia has little more than a year to prepare for hosting two important events on the international scene. First is the summit of 16+1 Initiative in 2019, and in first half of 2020 the country will be presiding nation of the European Union. 16 + 1 Initiative includes China, 11 EU countries: Croatia, Bulgaria, Czech Republic, Estonia, Hungary, Latvia, Lithuania, Poland, Slovakia, Slovenia and Romania and five EU candidates or potential candidates: Serbia, Albania, Bosnia and Herzegovina, Montenegro and Macedonia. Even the Croatian Prime Minister Andrej Plenković suggests that Croatia was honored with being a host country for this initiative because of the Pelješac Bridge. He claims that building of this bridge unites EU and Chinese investments and does not necessarily makes competition between the two international powers. Mr. Plenković believes that this can be a powerful incentive and that other projects in different sectors are also being implemented in Croatia. He believes that it is not impossible for other similar projects such as the Pelješac Bridge to be funded by European funds, and that the Chinese companies are involved in the realization, especially in the area of railway infrastructure and the port area.

Apart from infrastructure projects, co-operation with China is also an opportunity for domestic companies or exporters. In recent years the Croatian Exporters Association has warned at several conferences that Croatian companies have to look for opportunities to cooperate with China and South Korea. In September 2018, the electrical, transport and energy company Končar signed a joint venture agreement with China’s high-voltage switchgear production facility China XD Electric Co. The joint venture called „Končar-XD High Voltage Switchgear” is 50 per cent owned by each of its partners, based in Zagreb, and their products, which are complementary to the existing Končar production plant, are intended for the European market. New plant will be located at the Končar site in Sesvetski Kraljevac, and will employ 60 new and highly educated workers. The production is supposed to begin in 2020.

Since Croatia entered into the European Union, it has become an even more interesting market for China. With the cooperation on infrastructure projects and the growing number of Chinese tourists in Croatia, the country needs to make sure that its companies find their niche, however small, on the Chinese market. Thus, the 16+1 Initiative summit may be an opportunity for the domestic economy. After the trade war with the United States, China is able to turn more to the European Union. This should be well-played by Central and Southeast European countries.

In commodity trade with China, Croatia, as well as the EU, recorded a deficit. According to the methodology that applies to Croatia’s accession to the European Union, China exported EUR582m worth of goods to Croatia in 2013, while Croatia in that year exported more than USD57m. In 2017, imports from China reached USD700m, while exports to the country amounted to USD112m, which means that Croatia has a deficit of USD582m in its trade with China. According to data from the Central Bureau of Statistics, Croatia was visited by 159,000 tourists from China last year, a growth of 56 per cent. The same source shows that, for example, in 2010, there were slightly more than 13,000 Chinese tourists in Croatia.