Let’s not blame the euro for the crisis

The factor deciding the pace of economic growth is the quality of the economic policy. There is no evidence that the adoption of the single currency inhibits economic growth.

The euro currency is also used in several countries that do not belong to the European Union, and consequently also to the Eurozone: Monaco, San Marino, the Vatican, Andorra, Montenegro, and Kosovo. While the first four of these states are small enclaves with mostly symbolic significance, and Kosovo’s statehood is disputed by many countries, Montenegro is a full-fledged state with a chance to join the European Union. Due to the hyperinflation which affected the Yugoslav dinar, in 1999 the authorities of Montenegro introduced the German mark as the second official currency. In 2000, the German mark became the only official currency in the territory of Montenegro, and in 2002 the German mark was replaced by the euro.

The opinion polls indicate that one of the reasons for the reluctance towards the single currency is the expected increase in prices. According to the “Public opinion monitor” of the Poland’s Ministry of Finance, approx. 60 per cent of Poles are concerned about an increase in prices after the introduction of the euro. Half of that percentage expect other negative effects of the introduction of the euro (the deterioration of their own financial situation, an increase in poverty and inequality, financial difficulties for the country). The fear of rising prices is the most important cause of skepticism towards the euro in other countries as well.

However, the statistical indicators do not convince some of the citizens, who think that the prices of goods and services purchased by them will grow, even in the period of statistical deflation. This is due to psychological reasons. Daniel Kahneman, a psychologist who received the Nobel Memorial Prize in Economic Sciences, has demonstrated that we experience losses much more strongly than gains. If therefore in the basket of goods and services some of the items become cheaper and others become more expensive, then we consider the latter to be the real indicator of inflation. In addition everyone has an individual basket which may greatly vary from the statistical basket.

In Lithuania, which introduced the euro on January 1st, 2015, opinion polls carried out after a few months showed that as many as 95 per cent of the respondents felt that the introduction of the euro led to an increase in prices. In the age group from 65 to 74 years, 75 per cent of the surveyed people believed that prices increased significantly. Meanwhile, according to the Lithuanian Statistical Office in December 2015 the prices of goods and services (Consumer Price Index ‒ CPI) were 0.1 per cent lower than in December 2014. In the years preceding the accession to the Eurozone prices grew by 2-3 per cent annually, but in 2014 Lithuania and many other European countries began experiencing a slight deflation of prices.

According to the web portal Numbeo, the prices of goods and services in Lithuania are higher than in Poland. However, this does not result from the adoption of the euro, but from the previously existing price structures. The price comparisons between Poland and the countries of the euro area depend on the exchange rate of the zloty. The weaker the zloty, the lower the prices in Poland when converted to euro, even though this has no effect on the purchasing power of the Polish consumers. 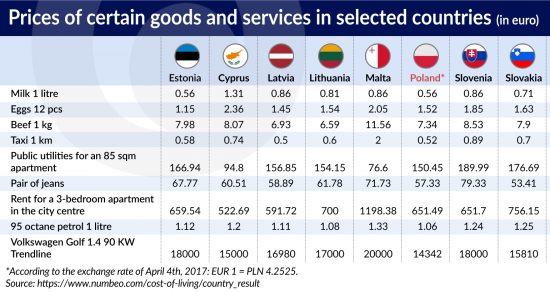 The introduction of the single currency does not lead to the unification of prices, even in neighboring countries. This applies especially to so-called non-tradable goods that are not subject to international trade, but also to some tradable goods. This may be associated with different rates of indirect taxes, the level of internal competition which forces low margins, the habits of consumers, etc.

The financial crisis in several countries exposed the disadvantages of the single currency, and especially the lack of ability to absorb external shocks through the devaluation of the currency. However, two things should be noted.

Firstly, the single currency was not the source of the crisis, and at the most made it more difficult to get out of it. Some countries, especially Greece, Italy and Portugal, were far from fulfilling the Maastricht criteria at the time of entering the Eurozone, and their admission was based on political and not economic calculations. Most of the countries of the Eurozone suffered from a recession in 2009, but retained stability.

Secondly, the financial crisis also affected several European countries which were not members of the Eurozone. The deepest recession occurred in the three Baltic States: Lithuania, Latvia and Estonia. They had a fixed exchange rate (currency board) even before accession to the European Union, and their currencies entered the ERM2 system almost immediately after accession.

The fixed exchange rate meant that these countries were de facto already in the euro area. This resulted in a significant inflow of foreign capital, acceleration of growth and the emergence of significant deficits on the current account of the balance of payments, reaching up to 20 per cent of GDP. When the capital began to withdraw to safe havens in 2008, the Baltic states went through a deep crisis. The IMF experts recommended the devaluation of their currencies, that is, exiting the ERM2 system and postponing entry into the Eurozone. Instead, these countries opted for an internal devaluation, i.e. reduction of salaries, retirement pensions and consumption, while maintaining fixed currency exchange rates.

Slovenia and Cyprus also went through a financial crisis. In both countries, the source of the crisis was banks. Slovenia had already entered the Eurozone in 2007, and the Slovenian tolar was in the ERM2 system from June 28th, 2004. In the years 2004-2007, the Slovenian economy grew very quickly, benefiting from the influx of foreign capital. The situation began to change along with the deepening of the global financial crisis. In 2009, the GDP fell by -7.8 per cent. In 2012 and 2013, a banking crisis occurred in Slovenia, which resulted in another recession. The crisis was caused by incorrect lending policies, especially in state-owned banks. There is no way to link it to the country’s presence in the Eurozone.

A financial crisis also occurred in Hungary, which does not belong to the Eurozone, as well as in Iceland and Ukraine, which are not even the European Union members.

After accession to the European Union, the Hungarian economy grew more slowly than the economies of other Central European countries. In 2007, the growth rate fell below 1 per cent, while the remaining countries in the region developed almost too quickly. In fact, the slow rate of growth could be an advantage in times of crisis. It could be a sign that tensions in the economy are smaller than elsewhere. But because of the huge budget deficit investors fled from Hungary earlier than from other countries.

The crisis in Hungary began as early as mid-2007. Over the years the National Bank of Hungary had tampered with the exchange rate of the forint and lowered it in order to boost exports. As a result, confidence in the forint was lower than in the case of other regional currencies. In autumn 2008, Hungary started experiencing dramatic capital flight, the government began to have difficulties with the sale of bonds, and the Hungarian currency began to rapidly lose value. The National Bank of Hungary asked for a EUR5bn loan from the European Central Bank, and the government announced cuts in the budget for the following year. The authorities finally asked for the assistance of the International Monetary Fund. In November 2008, the IMF approved the Hungarian reform plan and provided EUR20bn in aid together with the European Commission and the World Bank. The loan was repaid in full by 2016.

The Ukrainian economy reacted to the crisis extremely quickly and painfully. The country endured a sharp decline in industrial production, a devaluation of the hryvnia and a deep recession. Before the global crisis Ukraine enjoyed five years of strong growth. Due to the influx of foreign capital – both in the form of direct investment and loans – in spring 2008 the National Bank of Ukraine determined that the hryvnia should be revalued. In the autumn the situation changed dramatically. The foreign loans ended and capital began to flee Ukraine. But this was only the beginning of that country’s woes.

Unlike Poland, Ukraine did little to change the structure of its economy. The huge industrial complexes inherited from socialist times – and taken over by the local oligarchs – are the backbone of its economy. The export of steel and iron accounted for 34 per cent of all Ukrainian exports in 2007. Ukraine was benefiting from the economic boom driven by China’s hunger for raw materials. In the years 2003-2008 steel prices grew more than three times on the world markets. In autumn 2008, the economic situation collapsed. The prices fell even more sharply than they rose in the preceding years. What’s worse, even at these prices there was no one to sell to.

The Ukrainian banks had previously taken out loans abroad and granted them to businesses and consumers on the domestic market. When many customers stopped repaying their loans, the banks became insolvent. In November 2008, the IMF approved a loan of USD 16.4 billion for Ukraine.

Does the euro strengthen, or inhibit growth?

Before the introduction of the single currency it was predicted that it would increase trade turnovers, and thus speed up economic growth. Economists mostly pointed to the disappearance of the exchange rate risks in intra-Eurozone trade and an increase in competition, which would force better efficiency of enterprises. The financial crisis, whose epicenter was located in the United States and not in Europe, ruined those hopes. Reluctance towards the euro also began to prevail in Poland. But a comparison of the rate of growth of the countries that adopted the euro and those that retained their sovereign currencies does not provide a definitive answer to the question whether the euro strengthens or weakens economic growth.

The country with the highest economic growth in the years 2004-2016 was Slovakia, which has been in the Eurozone for eight years. Slovakia, together with Poland and other 8 countries, became the EU member in 2004.

Unable to absorb the shock caused by the financial crisis that began in the United States in 2009, Slovakia experienced a recession. Its economy shrank by more than 5 per cent. But in the following years it maintained a fairly high growth rate. It did not suffer from the second wave of recession which hit the European Union and the Eurozone in 2012. Slovakia is the largest country which joined the Eurozone after the original twelve. It is much smaller than Poland, but can be a point of reference for us in some respects ‒  it did not have a currency board, it did not enter the ERM2 immediately after entry into the European Union, the level of GDP per capita in both countries is quite similar, as are the main parameters relating to the social situation. According to Eurostat data in 2016, the average remuneration in the economy of Slovakia amounted to EUR 7.7  per hour, and in Poland ‒ EUR 7.0. The example of Slovakia shows that a relatively low level of GDP per capita is not an obstacle to be in the euro area.

There is no evidence that the adoption of the single currency inhibits economic growth. The factor deciding the rate of economic growth is simply the quality of the economic policy.