The ECB is slowly getting ready to limit quantitative easing

In the constant stream of incoming information we often miss other important reports from the market, such as the third tender under the TLTROs II program.

To use sports terminology, the Fed is in the lead, because the interest rate differential between the United States and the Eurozone has been clearly increased. More importantly, after reading Fed’s forecasts, we can expect further increases in the United States. It is therefore no wonder that the dollar exchange rate against the euro has reached the highest level in almost 14 years.

The decline of the euro would surely be greater and faster, if investors expected a further increase of quantitative easing in Europe. But now this seems very unlikely. ECB’s decisions lead us to believe that the European bank is thinking about ending the current policy. Let us recall that the ECB has extended the time horizon of its program until the end of next year, but at the same time announced a reduction in the quantity of monthly purchases of assets starting from April 2017 (from EUR80bn to EUR60bn). What does this mean? The answer seems simple: a concealed tapering or reduction of the currently purchased volume of assets.

Indeed, the ECB has made every effort to ensure that its announcement of a reduction in the scope of quantitative easing would not cause such a shock, as the Fed’s similar announcement of May 2013. That is why the ECB has offered the markets an extension of the time horizon of its policy to sweeten the news. The ultimate message is the same: „prepare for a reduction.”

Isn’t this too early?

Many elements (such as the forward EONIA rates) have provided arguments for tapering. Still, there was a risk that something could happen in the economy or the markets right after the announcement of tapering, which could call into question the decision and consequently undermine the credibility of the ECB. Therefore, I would dare to say that the management of the ECB must have been very happy about the results of the tender of December 15th under the second edition of the TLTRO program, as part of which the ECB lent more than EUR62bn to banks.

There is no doubt that one of the reasons behind ECB’s recent moves is an improvement on the credit market. After years of stagnation we can see small, but increasingly important symptoms of improvement.

What has led to this improvement and why is so much importance attached to this? We cannot overestimate the impact of asset purchase, because it surely paved the way to the lower interest rates. The above answer would be incomplete without mentioning the aforementioned TLTRO program addressed to the banks.

The amount of lending to the private sector amounts to 100 per cent of the GDP and this is much more than in the US (where it amounts to a bit more than 50 per cent).

How much money did the ECB pump in?

There is no problem with answering the first question. The total pool of funds pumped into the economy has just exceeded EUR2 trillion, that is approx. 19 per cent of the GDP of the Eurozone as a whole. The breakdown is as follows: EUR1.5 trillion comes from the purchase of assets, the rest (more than EUR0.5 trillion) is due to the TLTRO transactions.

Under the first TLTRO (TLTRO I) the ECB offered banks almost EUR432bn. In turn, in the second edition of the TLTRO (TLTRO II) banks have thus far borrowed over EUR500bn, but we need to keep in mind that out of the EUR400bn borrowed during the first tender in June 2016, about EUR370bn was incurred by the banks in order to roll-over loans taken out during TLTRO I. Thus the net increase of funds borrowed under TLTRO II should be adjusted for the aforementioned EUR370bn, which in turn gives us the amount of EUR130bn. This amount is still somewhat overstated, because banks are already repaying the funds borrowed during the period from September 2014 to June of 2016. In accordance with the rules laid down by the ECB, for TLTRO I in addition to voluntary payments, there are also mandatory payments. The latter, however, were small and amounted to less than EUR1.7bn. After netting out, the value of the described lending amounted to: about EUR30bn in June, EUR34bn in September, and about EUR48bn in December.

To sum up, the total size of the TLTRO programs is approx. EUR545bn euros, which accounts for about 5 per cent of the GDP of the euro area. 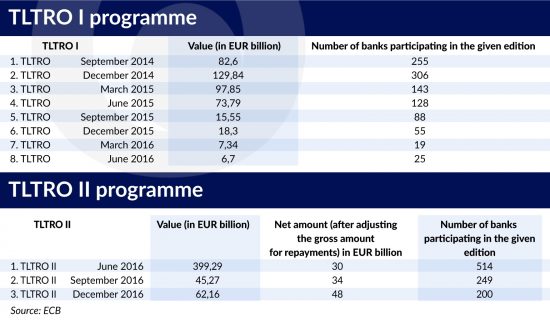 The attractiveness of the TLTRO II is certainly elevated by the lack of mandatory repayments provided for in TLTRO I. In addition, the fact that the ECB will pay the interest to the bank (instead of the bank paying the ECB), if during the period from 1 February 2016 until 31 January 2018 a bank demonstrates lending growth higher than in the 12 months leading up to 31 January 2016, certainly is a stimulating factor.

We know the size of the effective assistance from the TLTRO programs. Let us recall once again that the amount of assets purchased under the expanded APP was approximately EUR1.5 trillion, which in turn allows us to estimate the total size of ECB’s unconventional policy at about EUR2 trillion. So has this entire amount been directed into the real economy? The answer is no. We just have to look at the amount of funds deposited by banks at the ECB on both the deposit account and the current account. Since March 2015 (the date of launch of the PSPP), the sum of the funds accumulated there has increased by more than one trillion euros.

In other words, we can say that over half of the funds offered by ECB to the banks have gone right back to the central bank. The vast majority of these funds seem to come from the asset purchase program. This is a conclusion from the analysis of the consequences of the TLTRO programs on lending. Let’s take a closer look at this.

During the two years preceding the launch of the TLTRO program, new lending in the Eurozone has shrunk by nearly EUR600bn. Meanwhile since September 2014 we have been seeing an increase reaching EUR233bn. This is still less than half of the decline recorded in the years 2012-2014. The rate of growth of new lending to the private sector, however, is not only positive, but is steadily increasing and reached 2 per cent in October 2016. Based on those data, we can therefore calculate the following ratio. Until October (i.e. not taking into account the December tender) the net assistance from the ECB amounted to about half a trillion euros, out of which – as was already mentioned – about EUR233bn has supported new lending. Hence, it follows that from each EUR lent to the banks by the ECB, the banks lent at least 46 cents to the real sector.

This is not a breathtaking amount. But this does not change the fact that the decrease in lending, tormenting the euro zone for years, has been stopped. In addition, the net amount of EUR48bn from the third TLTROS II tender clearly exceeds the amounts from the previous tenders and, in effect, allows us to expect a further improvement in the rate of lending growth.

Of course it is not strong enough to allow for a quick tightening of the monetary policy. Therefore, the ECB has decided to extend the time horizon of the quantitative easing after all. Its growth, however, is strong enough ‒ as the described tender merely confirms ‒ for the ECB to be able to afford some tapering.