Poland should conduct its activity at the Asian Infrastructure Investment Bank (AIIB) from the perspective of a developed country and a mature EU member.

Asian Infrastructure Investment Bank launched its operations on January 2016 and currently has 61 members, Poland being one of them, 40 of which are Asian countries.

The developing countries of Asia should invest USD26 trillion in infrastructure until 2030 (or approx. USD1.7 trillion per year). This is necessary for the region to maintain the pace of its economic growth, eliminate poverty, and meet the challenges of climate change. For the time being, they only spend about half as much. In light of the budgetary constraints in many countries, both developed and developing, it is expected that a significant part of the necessary funds will be provided by private investors. The direct participation of development banks, such as the World Bank or the AIIB, in the financing of ongoing investments in Asia is low (approx. 2.5 per cent) and is unlikely to increase substantially in the near future. Therefore, their role should primarily consist in mitigating the risk of doing business in developing countries of the region, in order to ensure that private investors are more willing to invest their money in infrastructure projects in their territory.

The role of Poland

It would be worth looking at Polish involvement in this institution through the prism of the challenges it faces and to present country’s position regarding these challenges. It would be worth answering the question ‘what could Poland contribute to the ongoing discussions on the development challenges of Asia, the future of transport or energy, the concepts of the sustainable development of cities, the mobilization of private capital, or the modern management of a large financial institution.’ This way Poland will have a greater impact on the shape of the AIIB and its future role in the network of international financial institutions.

The bank may also become an important source of expertise about potential infrastructure investments that could be of interest for Polish organizations. If the AIIB opens regional offices in the future, they could serve as a good tool for the penetration of markets and search for valuable projects. Additionally, even though Poland has become accustomed to the idea that infrastructure is not its strong suit, Polish experiences in this area from the last decade could be interesting for many Asian countries and for the AIIB activities. It is worth gathering and transferring these experiences, especially since this young institution needs to absorb the experience and knowledge of its members, which should not be limited to Asian states and China.

A particularly good opportunity to supply the AIIB with Polish experiences and ideas will present itself in 2020-2022, when a representative of Poland – in accordance with earlier arrangements – will sit as a full Director on the Board of Directors, serving for all members of the so-called Wider Europe  constituency (currently composed of  Denmark, Iceland, Norway, Poland, Switzerland, Sweden, Hungary and the United Kingdom). Poland should already be carrying out substantive and organizational preparation for this task.

This does not in any way restrict Poland from pursuing its political and economic interests in the bank’s activities. Like all developed nations, the country should promote its companies in various ways and through various channels. Thanks to membership in the AIIB, they may potentially have greater chance to participate in tender procedures related to projects initiated by the bank or by the authorities of countries in which the bank actively operates. This requires the coordinated support of public administration and activity within the bank.

The implementation of Polish economic interests should be – as in the case of other developed countries – just a by-product of Poland’s activity in the AIIB, and not its main goal. Although it will never be an important source of financing for national infrastructure projects, the AIIB could become a factor supporting Polish political and business involvement in Asia.

So far, assistance from AIIB has been provided to 12 countries, such as: Azerbaijan, Bangladesh, China, Egypt, the Philippines, Georgia, India, Indonesia, Myanmar, Oman, Pakistan and Tajikistan. In the first year of its operation, the bank offered loans for the implementation of nine infrastructure projects with a total value of approx. USD1.7bn. Six projects are carried out together with other institutions (mainly the World Bank). By the end of 2017 the AIIB Board of Directors approved funding for further 15 projects (including 12 implemented with other entities) for a total value of almost USD2,6bn.

For comparison, the World Bank provides its clients with support of USD60bn per year, and regional development banks provide USD10-15bn. However, the mandate of these banks is broader and not limited to infrastructure. 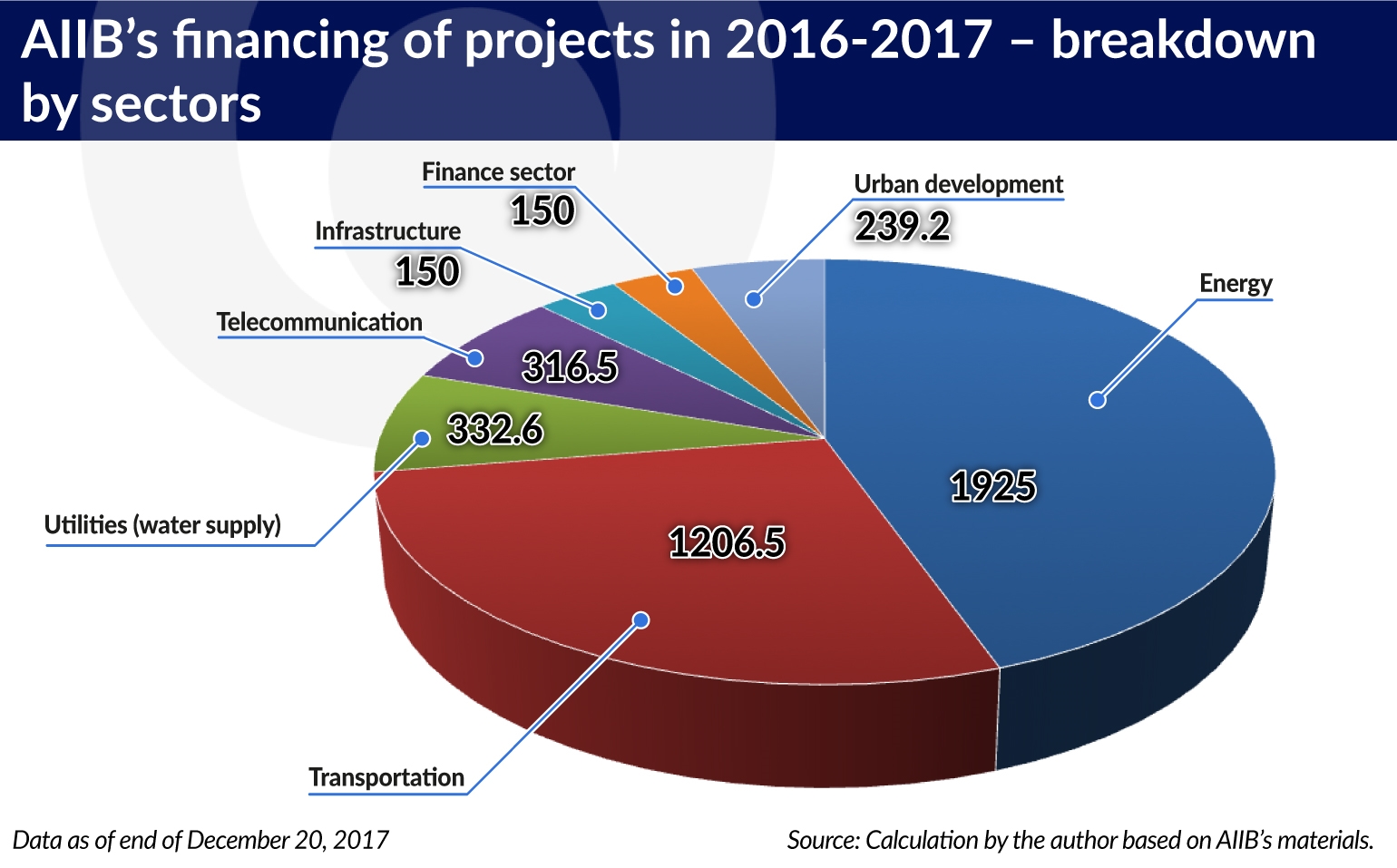 The future of the AIIB depends to a large extent on how it will respond to the challenges that AIIB may face in the short term. These challenges boil down to a major dilemma – is the AIIB supposed to remain an Asian development bank, or should it transform into a „global infrastructure investment bank”?

This primarily relates to the issue of funding projects outside Asia, and also in high-income countries in the region. The bank was established at the initiative of China and its mission is the development of Asia. Nevertheless – in accordance with its Articles of Agreement – it may conduct operations also outside the continent, as long as they contribute to the development of Asia.

The AIIB is aware that so-called non-regional member states (i.e. from outside Asia) are interested in obtaining financing from the bank, but at the same time understands the expectations of Asian countries which want a priority for investments in their territories.

The AIIB is serious about its development mission, i.e. providing assistance to less developed countries. In 2017 the bank was recognized by the OECD as one of the development organizations that may be financed with official development assistance (ODA). The condition that the bank has to fulfill in order to remain a member of this group is the provision of funds primarily to developing countries included in the list of aid recipients of the OECD’s Development Assistance Committee (DAC). It is not surprising, therefore, that the AIIB became financially involved in only one high-income country – Oman.

Another dilemma that needs to be considered is whether AIIB should focus on the financing of individual investments, or rather support the member states (through technical assistance and consulting services) in the implementation of comprehensive transport or energy policies? In accordance with the recently promoted concept – i.a. by the World Bank – the mission of multilateral development banks should be not so much to offer preferential financing for individual projects, but to mobilize the funds of private investors by influencing the macroeconomic, legal and institutional environment of individual countries.

This concept applies primarily to infrastructure projects, the natural field of activity of the AIIB. However, focusing on individual projects is less expensive: it requires less human and financial resources, and is therefore closer to the bank-promoted concept of a lean organization. For these reasons, at the current stage, the AIIB operates according to the „project-based approach”. But it does not exclude comprehensive cooperation with the governments of the selected member states in the future.

It is necessary to balance the proportions between joining the projects of other international institutions (mostly the World Bank) and the initiation of own investments. For the time being, mainly due to the short history of activity and personnel limitations, the AIIB joins projects of other banks, which were often initiated earlier. Its participation in these activities, however, is often limited to providing financial resources, while issues related to project management, transfer of knowledge, etc., remain the responsibility of the partners.

The establishment of the AIIB should therefore be regarded as an important step in the evolution of a system of international financial and development institutions. Undoubtedly, more time is needed before the bank strengthens its institutional framework and reaches the level of knowledge and experience that allows it to exercise a conscious and meaningful influence on the state of Asian infrastructure and, indirectly, on the development of the entire continent.

This article reflects the private opinion of the author.