Food in Poland is cheaper than in other European countries

Poland has one of the cheapest food in the European Union. The only country with cheaper food in Europe is Macedonia.

If we take the average food prices for the European Union to be 100, then this ratio would have the value of 58 per cent for Macedonia and 63 per cent for Poland. In the ranking of the EU member states, food in Poland is slightly less expensive than in Romania (64 per cent), Bulgaria (70 per cent), Lithuania (78 per cent) and in both the Czech Republic and Hungary (79 per cent each). In the ranking covering all of Europe, food is the most expensive in Switzerland (173 per cent) and in Norway (159 per cent).

Within the European Union, food and drink items are the most expensive in Denmark, where in 2015 the prices of food products and non-alcoholic beverages amounted to 145 per cent of the average level for the whole EU. In Sweden this ratio stood at 124 per cent, and in Austria, which was ranked the third most expensive, it was 120 per cent.

Only three member states of the “old” European Union have prices below the EU average: Spain, Portugal and the Netherlands. The first two were and remain the countries of the former EEC (the predecessor of the EU) with the lowest GDP per capita, while the Netherlands is the country with the most efficient agriculture in the world. 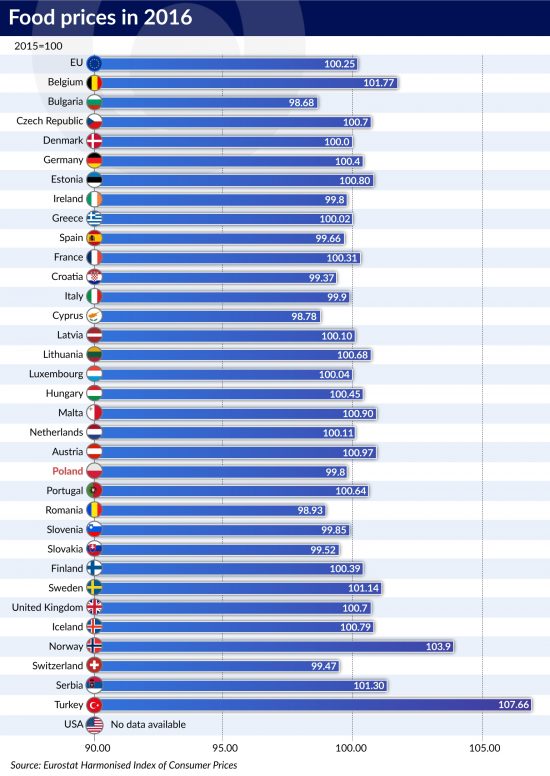 Broken down into product groups

Fortunately, Poland is not among the top three cheapest EU member states when it comes to tobacco products. In this respect the leader is Bulgaria (50 per cent of the average price for the EU), followed by Lithuania and Croatia. In the case of alcoholic beverages, the three cheapest countries are Bulgaria (64 per cent), Romania and Hungary.

A ratio or a percentage is never as transparent as a real price, because we cannot enter the ratio on the cash register in a store. In order to fill this cognitive gap, it was necessary to look for summaries of absolute prices. Eurostat prepares a statistical summary entitled “Detailed Average Prices” based on the data provided (or not) by the national statistical offices of the European countries, and this document is the source of information presented below. 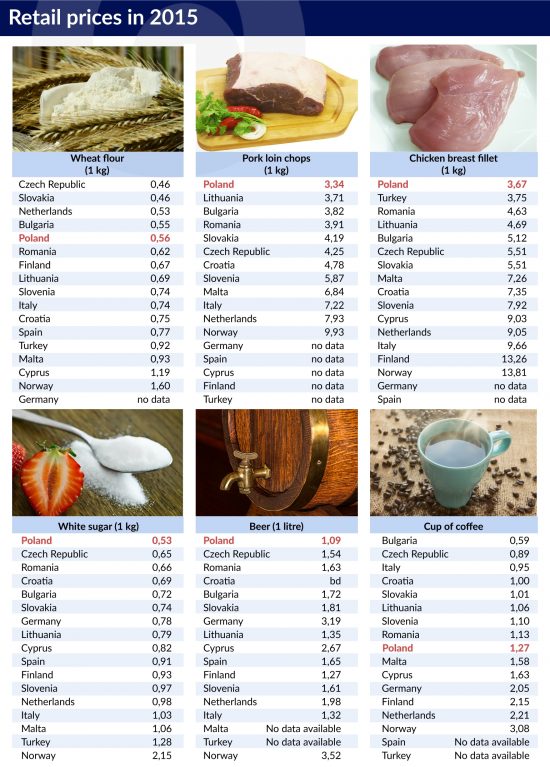 In the majority of other products included in the study as typical of the diet of Europeans, Poland is ranked second or is placed in other top spots among the cheapest countries. This is not true only for products such as wine, olive oil, black tea, and coffee.

Deflation, which is nowadays a pretty rare phenomenon, was the reason behind quite a noticeable decrease in the prices of basic foodstuffs in Poland in the years 2012-2015. Not much changed in 2016 either. According to the CPI index, food prices in Poland increased by just 0.9 per cent. Such a difference is barely noticeable when shopping.

Between 2012 and 2015 the average price of pork loin in Poland dropped by 29 eurocents, from EUR3.63 per kg to EUR3.34 in 2015. This represents a decrease by about PLN1.50. In the same period the price of chicken fillets decreased by 25 eurocents, from EUR3.92 per kg to EUR3.67. The price of wheat flour in Poland dropped from 55 to 46 eurocents, but the price of sugar dropped even more, from 92 eurocents to 53 eurocents in 2015, that is by as much as 39 eurocents (i.e. more than 40 per cent). The price of beer increased by 12 eurocents to EUR1.21. But we can make a reasonable guess that this is mainly due to the popularity of craft beer which is, supposedly or actually, better, and therefore more expensive.

The recent decrease in prices due to deflation, which is now coming to an end in Poland, was not limited to the falling prices of locomotives, as in the early days of the Polish People’s Republic, when the prices of bread, lard and margarine – as hard as frozen butter back then – were simultaneously exploding. This time around the lower prices could be observed during regular shopping for groceries at both larger and smaller shops.

However, if we extend the period subjected to the analysis, the price change vector could point in the opposite direction.

According to the Harmonized Index of Consumer Prices (HICP) data in the individual years, out of the 34 surveyed states in the years 2007-2015 food prices virtually did not change in Switzerland. The prices there have long been so high that ordinary Europeans from countries east of the Elbe rarely visit, but the natives have apparently had enough as well. 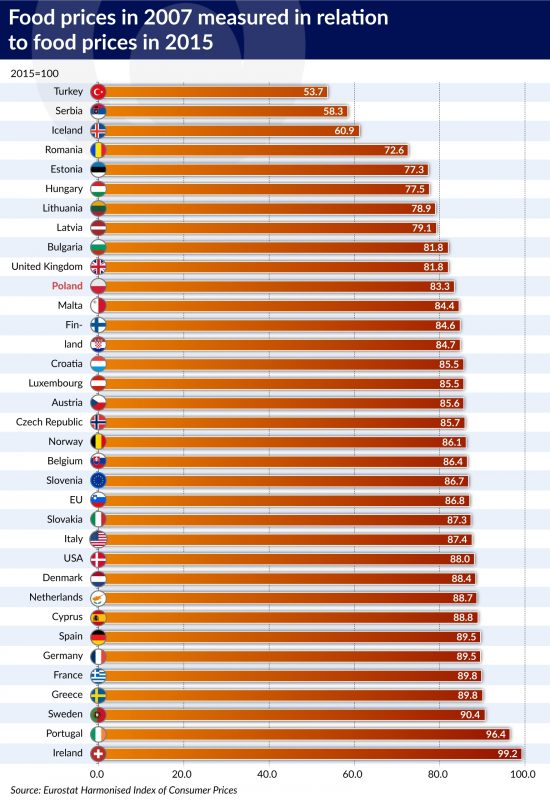 In the case of Poland, the increase reached 16.7 percentage points, which gave Poland a relatively high, 11th place in the ranking. The list was led by the dynamically developing Turkey, followed by the relatively poor Serbia, and Iceland, whose banks were making risky moves before the financial crisis.

With the reservation that the indicators presented below cover a wide variety of other consumer goods in addition to food, it’s important to take a look at the impact of taxes on prices. For this purpose we compare the HICP and the HICP-CT (HICP without the impact of tax changes on retail prices)(CT – Constant Tax Rates).

When the HICP indicator is higher than the HICP-CT, this means that in the given period the taxation of the surveyed goods has increased. In the years 2003-2016, the annual average increase in the HICP indicator in Poland amounted to 2.1 per cent while the increase in the HICP-CT was 1.7 per cent. This means that tax increases caused price increases. Changes in taxes are important, because nowadays there are no final prices which do not include taxes, so the comparison of the HICP with the HICP-CT is used to measure the change in the amount of taxes charged on goods and services consumed by the population.

The difference seems to be relatively small, but if we were to measure its multi-annual cumulative impact then over 14 years in the period from 2003 to 2016 the prices of consumer goods inclusive of taxes (calculated on the basis of the annual average value of the HICP) increased in Poland by 33.8 per cent, and if taxes had remained at the 2002 level, these prices in Poland would only have increased by 26.6 per cent. We have to admit that the level of taxation in the group of consumer goods is not acute. It is perceptible, but not as much as in the other post-communist countries.

The current prospects are not nearly as good as in the first half of this decade. Experts are forecasting that from now on food prices will continue to grow, maybe not by leaps and bounds, but the increases will be noticeable. According to the HICP, in the whole of 2016 food prices (along with other consumer goods) in Poland were still 0.2 per cent lower than in the whole of 2015, but they started rising at the end of the year. In December 2016 food prices were about 2.5 per cent higher compared with December 2015, and in January 2017 they were about 3.3 per cent higher compared with January 2016. In the upcoming periods these values could grow even further. The causes of these changes are mostly external – Poland’s market is adapting to the growth of world prices, so there is no reason to complain that Poland has done something wrong. 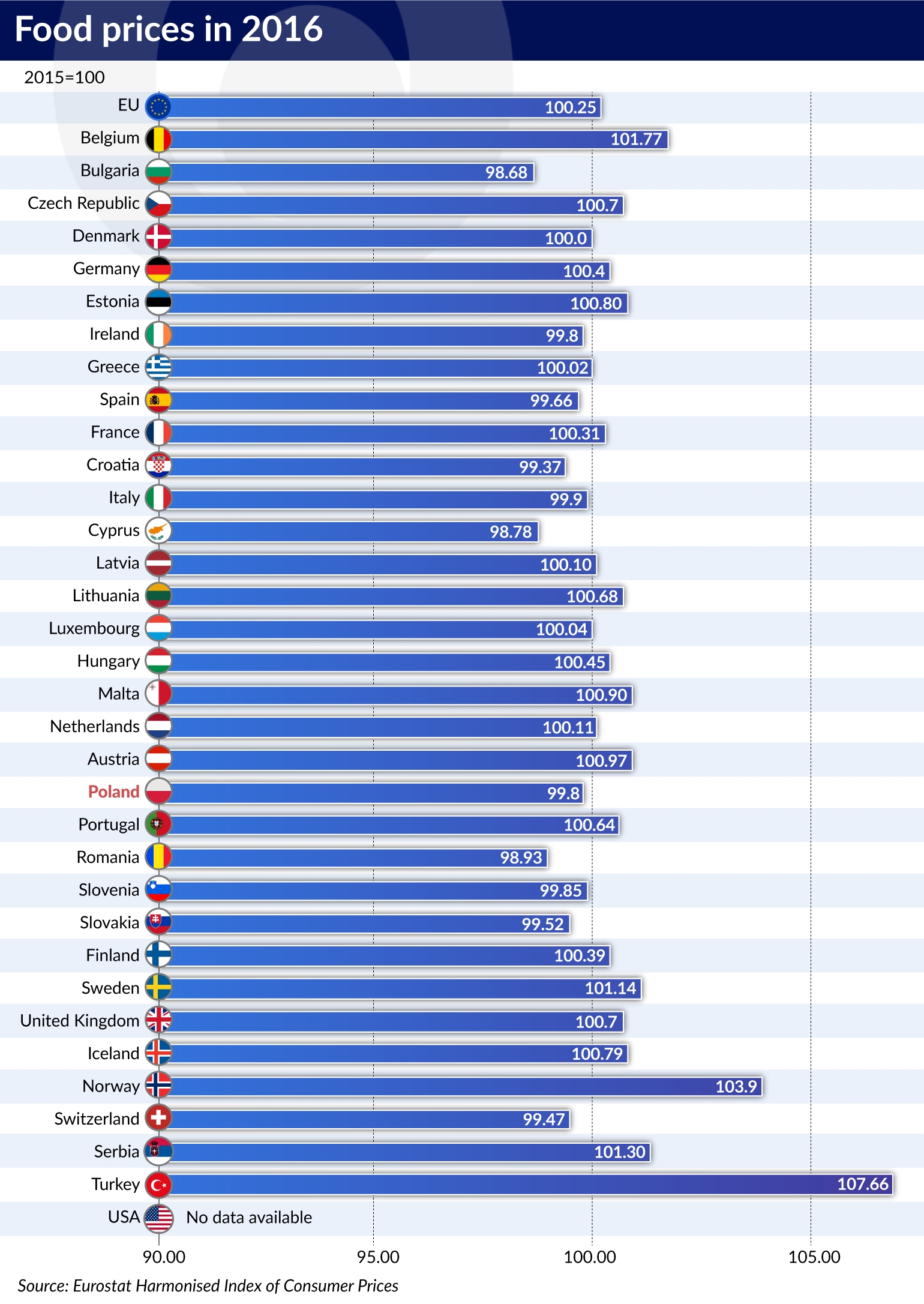 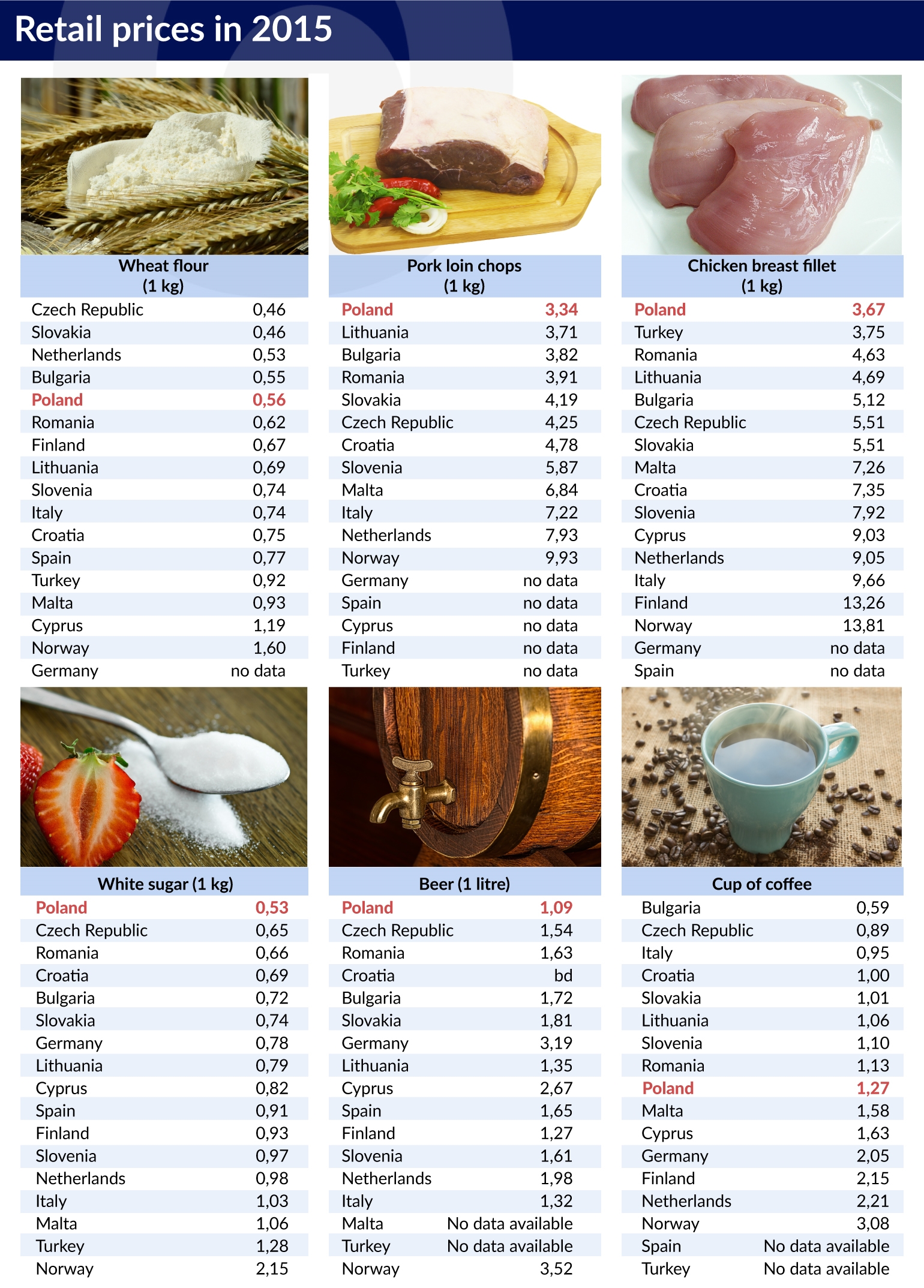 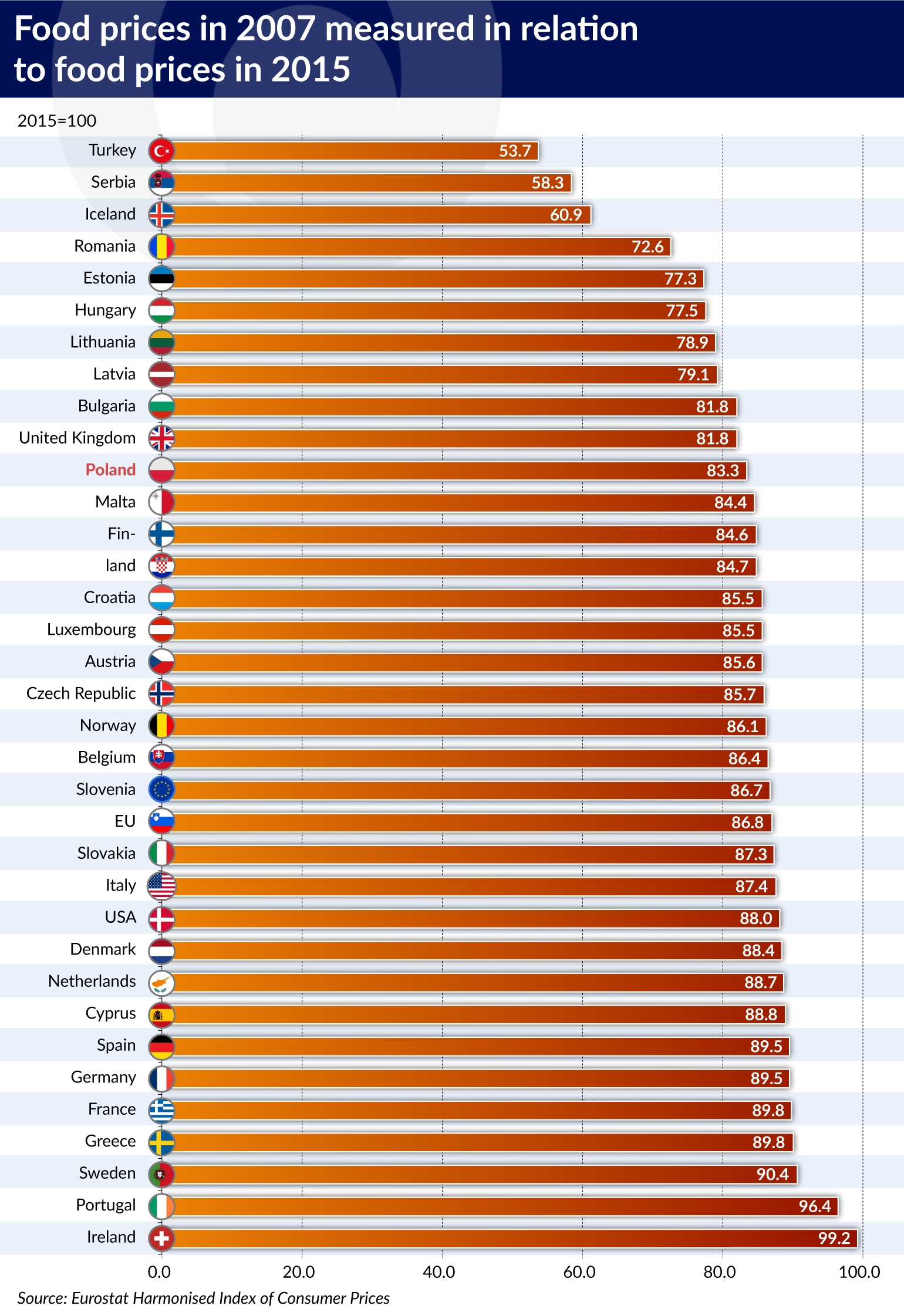 Category: Macroeconomics 30.10.2019
Central banks may use conventional or unconventional forms of monetary policy. Whichever is chosen by the European Central Bank (ECB) it influences all Central and Southeast European (CSE) countries. 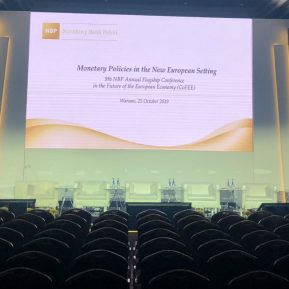