27.10.2014
Central Europe in general and Poland in particular have had an astonishing quarter century as their economies have dramatically closed the gap with the wealthier western half of the continent – but the catch-up risks stalling unless a further round of reforms is undertaken, warned the IMF’s deputy head during a Warsaw conference.

“The region risks a vicious circle of weak growth, disillusionment and retreat from market-oriented policies”, David Lipton, the first deputy managing director of the International Monetary Fund said at a conference in the Polish capital marking the 25th anniversary of the reforms that catapulted the region from communism to a market economy. The conference was sponsored by the IMF and by the National Bank of Poland.

The IMF issued a special report for the conference, spelling out the challenges of the 25 years of transition and looking at the tasks that still lie ahead.

Lipton is in a good position to judge just how far the region has come. He was one of the economists who rushed into Poland after the June 1989 partly free elections that led to Poland’s first post-war non-communist government. The country’s new rulers were faced with an economic catastrophe –hyperinflation, collapsing exports, empty shops, a massive foreign debt and few of the structures of a functioning market economy.

“For us, walking around Warsaw in the summer of 1989 was surreal,” he said. “We saw people waiting in lines outside grocery stores that had but a pyramid of canned goods piled in the window. … In the fall of 1989, as controls broke down, and the monthly inflation rate edged up into double digits, money changers one block from the central bank offered more zlotys for our dollars with every new day.”

The debate in Warsaw and months later in other central European capitals was over gradualism versus shock therapy. Gradualism was obviously more attractive because it spared people immediate pain, which made it alluring for politicians, while shock therapy promised massive and fast-paced change. Poland, under the leadership of Leszek Balcerowicz, the finance minister at the time, chose the region’s most dramatic shock therapy.

It turned out to have been the correct choice. Poland has done better in the last quarter century than all of its more cautious peers, while countries like Ukraine which avoided most reforms, have barely budged since 1989.

Anders Aslund, a Swedish economist who advised the reformist Russian government in the early 1990s and later consulted for Ukraine, said that “Poland and Estonia are the two big successes” of the transformation. Poland has seen its per capita GDP more than double in the past quarter century, while more cautious Hungary has seen its GDP rise by a quarter. Ukraine has hardly grown at all.

“It seems clear that the countries that made sweeping changes, and that kept at reform and stabilisation have done well,” said Lipton. “Countries that followed a more gradual path suffered from the decline of the old industries, and did not get the boost from the growth of new firms. And in some countries bouts of macroeconomic instability repeatedly undermined reforms and sapped political momentum.”

Overall, the region as a whole was catching up to the EU average by about 1 percentage point a year from 1995 to 2008. That saw GDP per capita rise from 35 per cent of the EU average to 50 per cent by the start of the global economic crisis.

Since then, the catch-up rate has slowed sharply.

The region has been buffeted by the crisis and then by the protracted slowdown in the Eurozone, its largest economic partner. To the east, war in Ukraine and the resulting sanctions levied against Russia have also hurt CEE economies.

“We have had a 25-year success story, but it has stopped recently,” said Boris Vujcic, governor of the Croatian National Bank.

The IMF pointed out that in recent years the region seems to have lost its reformist zeal as governments ramp up spending and back away from tough choices over continued changes aimed at making their economies more competitive.

“The recent crises appear to have resulted, in a few countries, in a more fundamental questioning of the direction of market reforms,” said the IMF’s report, adding, “There seems little to suggest that the problems some countries ran into during the crisis were due to `too much reform,’ or that a return to a more activist role of the state in industry or other sectors will help. Instead … there is good evidence of a strong relationship between reform and convergence, even if the payoffs from reforms sometimes take time to materialize.”

The Fund’s recommendation to kick-start growth is another bout of tough love: establishing better regulations and policies to rein in market excesses, more focus on macroeconomic and financial stability and to increase the depth and pace of structural reforms.

All this will have to be done at a time when the CEE faces a growing demographic challenge thanks to low birth-rates, high levels of migration and ageing population and while trying to shift from “copy-cat” economies based on adopting existing technologies from the wealthier west to ones based on innovation.

“We know innovation is a painful process,” noted Marek Belka, the governor of the Polish central bank, while adding that Poland still has a lot of positive factors in its favour including a good geographical location, low taxes, an undervalued currency and, despite occasional squeals of complaint from business, a broad attitude favourable to entrepreneurs. “Reform is difficult … but I don’t think we should be pessimistic.”

Category: Macroeconomics 10.07.2019
In the Global Financial Stability Report the IMF examines the evolution of financial markets since the recent financial crisis and points to the buildup of downside risks in various segments of the financial market. 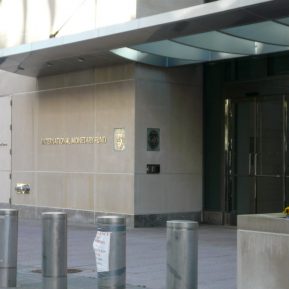