In Poland farming is profitable over 50 ha

23.06.2017
Polish farms should be bigger and operate like companies, says Justyna Góral, PhD, who studies farmers’ income and the effectiveness of the Common Agricultural Policy instruments. 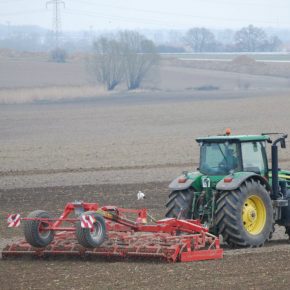 CE Financial Observer: The government has taken a stand in which it declares the need to maintain direct subsidies for Polish farmers and would even prefer to increase them in the new EU’s Common Agricultural Policy after 2020. Is it possible?

Justyna Góral: Introducing a unified subsidies rate across the whole European Union is not possible. On the one hand, there is no money to level the rates up in all the EU countries to those standing in small, rich countries, such as the Netherlands, Denmark and Malta (approx. EUR400/ha). On the other hand, the governments of richer countries, fearful of their electorate, will not be willing to level the rates down to the European average, which is approx. EUR240/ha.

Thus, the subsidies will vary in different countries. Besides, that’s what they were designed for – not to create an equal standard of living among European farmers, but between farmers and other professions in individual Member States. In 2015 in Poland, farming income constituted only approx. 75 per cent of industry workers’ income, and in the past this disproportion was even greater.

So the subsidies will not disappear quickly?

It has been almost decided that after 2020 the same rates will be applied. The missing fee from the United Kingdom (current net payer to the EU budget) will probably be a problem of the next agriculture budget, after 2028. Then, the voices that agriculture, the source of livelihood of a few per cent of EU citizens, cannot consume as much as 38 per cent of the budget, will find fertile ground. I doubt, however, that subsidies will disappear completely. And even if that happened in the distant future on the European level, the governments of individual states would probably still pay them from national budgets.

Let’s imagine, as an intellectual exercise, that direct subsidies for farmers cease to exist. What would it change?

The subsidies translate not only into an improvement of farmers’ income, but also into a lower cost of capital and higher motivation for investment. If they disappeared, some farmers would probably refresh their business skills and start analyzing the information coming from the market. They would examine carefully every EUR of costs and manage their resources effectively. The prices of land would be adjusted and start to depend on the profitability of agricultural production, and production insurance would become more popular. In short, economically sound farms would work like any other businesses.

On the other hand, the lack of subsidies would be a disaster for the remaining farmers (approx. 20-30 per cent), who treat subsidies as a social benefit. These are small farms that mainly produce for their own needs, and the additional money is literally their “to be or not to be”.

So there is no point in letting the free market into the agriculture?

It is hard to discuss free market in the agriculture and provision of food security. Indeed, the European Union subsidizes farmers, but the whole western world does so, but New Zealand. Besides, some beneficial changes do take place in Poland. The weakest go out of the farming business despite the subsidies. Since 2004, the number of small farms (1-2 ha) has been decreasing, and the number of those with an arable land of 30-100 ha and over 100 ha has been increasing. This gives hope for improvement of competitiveness in Polish agriculture sector. Obviously, not today and not next month, but in a longer term.

According to the Central Statistical Office of Poland (GUS), almost half of Polish farmers’ income comes from subsidies.

Yes, approximately 45 per cent of farmers’ income constitute all sorts of subsidies. It is worth adding that, according to the Eurostat calculations, the income for one person employed in Polish farming increased by 82 per cent between 2005 and 2014 due to the stream of money from the Common Agricultural Policy.

However, since 2013 we have been observing a stagnation in the level of agricultural income. It could be stopped by higher purchase prices, but there is a system barrier. The farmers are dispersed, so they do not have much influence on market prices. On the other hand, the recipients of their products and companies that sell capital goods (e.g. fertilizers and feed) are so well-organized that they capture the highest margins and do not negotiate the prices with individual farmers.

Your studies indicate that the increasing share of subsidies in farmers’ income is negative and it proves that farmers seek easy and effortless income.

It is worrying that farmers lose contact with the market because of subsidies. Before 2004, a typical Polish farm had diversified production. A price drop in one segment of production was compensated by an increase in another and this, to some extent, stabilized the farm’s income. Today, farmers care less for the diversification of production or the analysis of market data, but more about subsidies. That is why the CAP instruments even decide what landscape we have. So far, they have promoted crop cultivation, so the Polish countryside has got greener.

Will this trend continue? All Poland covered in grass?

In the case of Poland, the requirement of greening was met by most farms even before its introduction. And now this grass will be eaten by animals, because the production of beef cattle has recently gone up due to an increase in subsidy rates. Apart from that, the support is targeted at producers of high-protein crops for grain and sugar beet.

Is there any branch of agriculture that is profitable without subsidies? I read that raising fur animals brings Polish farmers between EUR400-600m a year without any subsidies.

The idea behind subsidies is to support sectors that are strategic for the economy or those which are the most ineffective. If a group of producers does well in the market and does not complain about low income, it is natural that they do not need such support. I study the influence of different instruments of the Common Agricultural Policy, thus I research agricultural production with subsidies. It may be interesting for you, though, that the subsidies we talk about are not the most effective part of the Common Agricultural Policy.

The Rural Development Program (RDP), the second pillar of CAP. Here the farmers have to engage, write a business plan and then for example buy machinery or modernize buildings. This is where the funds for knowledge transfer, innovation, modernization, investment and development of farms were allocated. This program includes also funds for agro-environmental and climatic payments, whose importance may be increasing.

I guess it is not profitable to be a farmer in Poland. Your studies show that since 2003 a statistical farm has never exceeded the income of EUR10,253 per year.

That is true, but my research was carried out on a small group of farms which run have accounting procedures (the Polish FADN). There are almost 12 thousand of them in Poland in comparison to 1.3 million farms in general (according to GUS). Calculations on data provided by GUS may be even less beneficial. To answer your question – agricultural production does pay off, but from approximately 50 ha and more. Then economy of scale became important – it is worth investing, it is possible to negotiate better prices for capital goods, better purchase prices and sometimes long-term contracts.

The average farm in Poland is probably smaller than 50 ha?

According to the Agency for Restructuring and Modernization of Agriculture, the average is 10.5 ha, but this is slowly changing. It should be noted that Poland is a highly varied country. The largest farms (over 100 ha) dominate in western and northern Poland, the smallest and weakest – in the south and east.

Why isn’t the number of profitable farms over 50 ha quickly increasing?

Here we have to get back to subsidies again. Because of them, the supply of land has decreased and it does not satisfy the demand. In 2004, the price of 1 ha of the stock of the Agricultural Property Agency oscillated around PLN5,000, and in 2014 around PLN25,000. In private sales, the average prices are doubled. This has some traits of a speculative bubble. Farmers keep every piece of field, because they treat it as an investment which brings an income from subsidies every year. Under such circumstances, it is difficult for small farms to become medium-sized ones because no neighbor is willing to sell land.

What can be done about it?

We still need to modernize farming and motivate it to develop in a more effective way – that is, through increasing the role of the Rural Development Program. The effects will be better if the opportunities of the RDP are coupled with the cohesion policy. Such a duet would give a major boost to favorable changes in rural areas. The more innovation is implemented, the more jobs will be available outside farming, and the less hidden unemployment, the faster the changes will occur.

For the time being, yes, but let me repeat that the second future agricultural budget in 2028 may change a lot. We should pay attention to the issue of CO2 emissions in agriculture and the shrinking resources of drinking water.

Because the EU is going to condition the payment of future subsidies on meeting some requirements?

Yes, it is quite possible. Please remember that in 2007 the EU set itself the goal of reducing the emission of greenhouse gasses by at least 20 per cent by 2020, and agriculture is the third sector in the EU in terms of the volume of emission of these gasses. Agriculture is also the main source of emission of two gasses: methane and nitrous oxide, whose global warming potential is significantly higher than that of carbon dioxide.

Another matter is the water supply. Europe is not a continent that has big problems with water, yet Poland is on the last but one position in this rating. At the same time, the production of 1 kilogram of beef uses as much as 14,500 liters of water, and by contrast, 1 kg of wheat grain needs 1,000 liters of water. This will have to be taken into consideration when the scale of livestock production increases in the future.

Justyna Góral, PhD, works in the Institute of Agricultural and Food Economics. 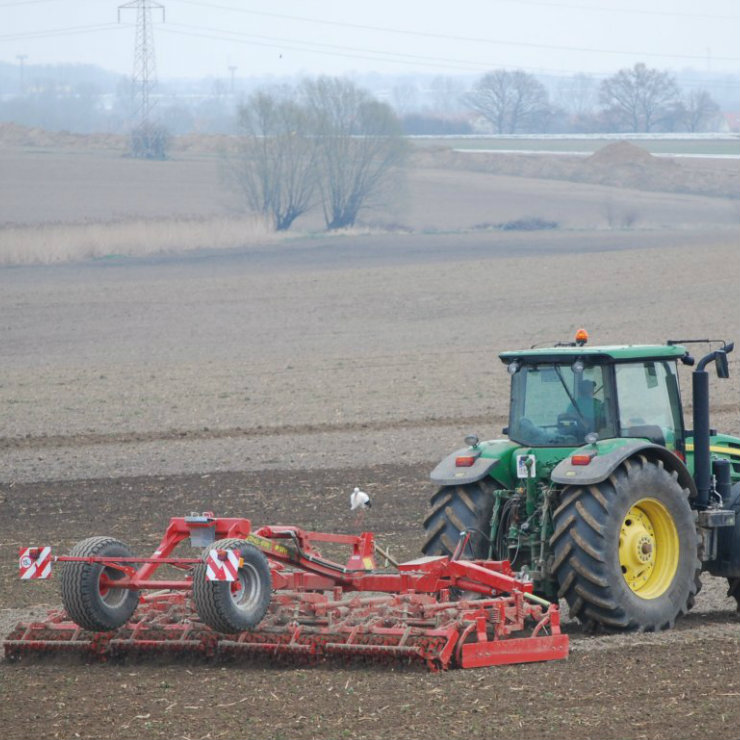 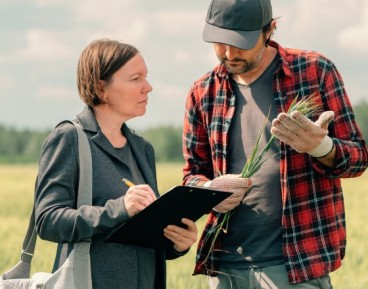