Since the beginning of this year we have been observing a slowdown in investment, which applies especially to medium and large-sized non-financial enterprises.

A certain slowdown was to be expected because of the completion of the investments from the previous financial framework, but the scale of the phenomenon turned out to be more serious than predicted. According the latest data published by the Central Statistical Office of Poland (GUS) the total level of investment in Q3’16 decreased by 7.7 per cent y/y.

Such response from the enterprises was surprising considering, firstly, the stable growth of the economy based on robust domestic consumption, and secondly, the healthy financial and economic situation of companies and the favorable lending conditions for businesses  in the credit markets.

The increased uncertainty in the internal and external environment of enterprises is most frequently cited as the likely cause of the collapse in investment, in addition to the gap between the successive financial frameworks. Some of the concerns of companies may have resulted from the fact that economic and fiscal policy, which has an impact on the conditions of management and the future situation of enterprises, was only beginning to take shape.

Companies waited, among others, for details regarding the functioning of the system eliminating loopholes in VAT (the Standard Audit File progressively implemented from July 2016), the amendment of the Tax Code introducing the tax law circumvention clause (July 2016) and changes in the Penal Code increasing penalties for VAT extortion (government draft law adopted in September 2016), the amendment of the public procurement law (July 2016) and the Retail Sales Tax Act (September 2016). 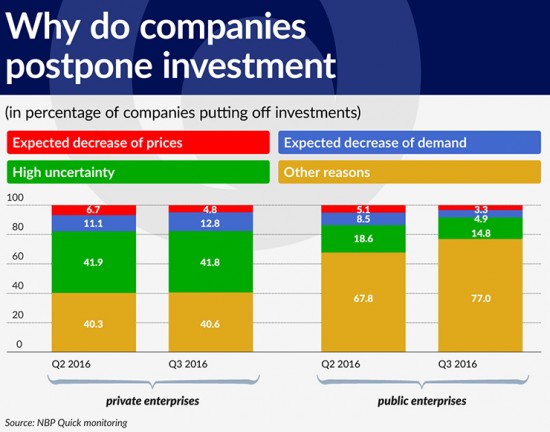 What had exactly happened?

Which companies reduced their investments the most? The financial data of enterprises shows clearly that investment was reduced the most by enterprises controlled by the State Treasury (in terms of majority stake in the capital). Therefore, if we look at the type of activity conducted by the companies, investment slowdown applied mainly to the sectors of the economy in which public capital had a significant stake, such as the water supply, sewage and waste management (hereinafter referred to as the water and sewage sector), energy sector and transport. 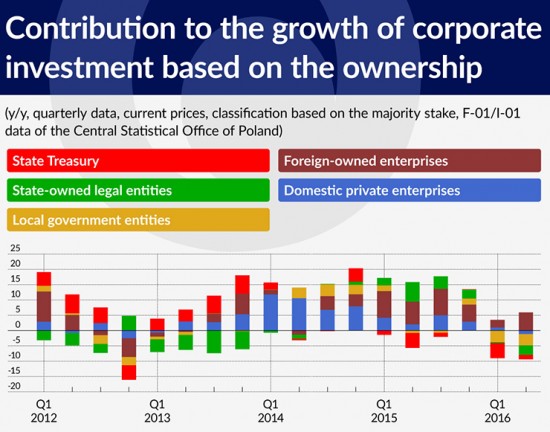 The slowdown of investment in the transport sector is mainly associated with the situation in railways, where multi-annual and high-volume investment programs co-financed by EU funds are implemented (in 2016, the decline in investment in transport only applied to the public sector, while the private part of the sector recorded a small positive result). The previous financial framework ended with an accumulation of orders at the end of last year, complicating the situation of both sides of the concluded contracts (the risk of liquidated damages for delay for the one side, the risk of loss of EU funding – for the other side). This applies, among others, to the order from the Polish Railways (PKP) and the local carriers for the delivery of railway vehicles for PLN1.3bn from Pesa (the largest Polish manufacturer of railway vehicles), and an order for PLN1.8bn from Newag (specializes in the production, maintenance, and modernization of railway rolling stock).

In the next financial framework, i.e. until 2023, investments in the railway sector are supposed to reach PLN67bn (this was indicated in 2015 in the resolution of Poland’s government on the establishment of the National Railway Program until 2023) and this is a budget twice as high as in the previous financial framework. However, there is still no definitive investment plan which for this sector is defined in the National Railway Program. And the preparation of a project, the issuing of environmental decisions and building permits, takes three years on average, and the construction works take two additional years.

Investment processes in the railway sector are to be facilitated by the amendment of the railway transport act adopted in August 2016. Changes introduced in the act aim to accelerate work on the preparation and implementation of railway infrastructure investments and to harmonize Polish legislation with EU law. The lack of success in these activities carries the risk of delays. The currently implemented investments were planned for 2016 but these are mostly unfinished and delayed tasks from the previous framework, whereas plans for the year 2017 have not yet been established. There is a risk of downtime in railway investments, and consequently of a dangerous accumulation of investments in the final years of the financial framework, which will affect the situation of the contractors, as well as the results of the economy as a whole.

According to the new National Railway Program, in the years 2019-21 the annual railway investments are to reach PLN12bn which already exceeds the estimated capabilities of the contractors, even without taking into account delays in the implementation of the investment plan (construction industry experts estimate these capabilities at PLN10bn per year). The accumulation of investments, also simultaneously carried out in road infrastructure, could lead to increases in the prices of services, materials and raw materials, price wars and problems of contractors with the completion of investments.

A collapse in investment was also recorded in the sector of companies involved in the water and sewage sector which in majority is owned by local governments. Investment in this sector was inhibited by the lack of harmonization of the public procurement law with EU legislation and the water law. As a result there is a delay in the implementation of projects financed under the new financial framework, and in the water and sewage sector a significant proportion of the investments is financed with the participation of EU funds (nearly PLN10bn was allocated in the operational programs Infrastructure and Environment and the regional operational programs for investment in water and sewage). The lack of consistency of the regulations may prompt the European Commission to withhold funding of projects in the non-compliant areas and even to withdraw already provided grants.

The Public Procurement Act introduced a possibility to award contracts directly to subordinated entities in the in-house mode, i.e. without the use of a tender procedure. Such a solution promotes local government enterprises. It simultaneously raises the concerns of the private sector, especially in the sector of waste management, which made significant investments in the previous years. Lack of certainty as to the final legal decisions and the many months of discussions concerning the in-house mode (regulations concerning in-house procurements will enter into force at the beginning of 2017) have not been conducive to investment in this sector of the economy.

One of the problems that can be linked to the weak level of investment in enterprises is the lack of sectoral investment plans harmonized with the EU law. 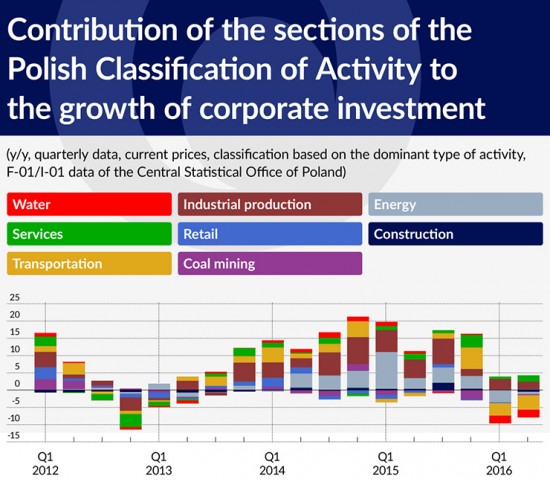 The water supply and sewage sector still has large investment needs, which results, among others, from the need to comply with the conditions of the EU accession treaty and the implementation of EU directives (the water directive and the waste directive). These plans are set out in the National Program for Municipal Waste Water Treatment. In accordance with the National Program for Municipal Waste Water Treatment, adopted in April 2016, there are plans for the implementation of investments for the amount of PLN29.9bn (compared with PLN55.9bn implemented in the years 2003-2014) for the years 2015-2021. One element which is important for the results of the sector’s enterprises is the fact that the regulations place the responsibility for the development of the water and sewage infrastructure on the water and sewage companies.

The slowdown in investment in the energy sector had a significant impact on the decline in investment growth in the enterprise sector this year. This sector is implementing large investment programs and faces the necessity of undertaking new projects aimed at ensuring the continuity of energy supply in the future (multi-annual projects worth more than PLN45bn are in implementation).

The economic calculations for future investments in the energy sector are burdened with uncertainty and the ability to finance them, especially in the energy companies that already carrying out large investments, such as PGE, Tauron Wytwarzanie and Enea Wytwarzanie. The biggest challenge is faced by Energa, which has resumed the program of construction of new power generation blocks in Ostrołęka (the value of this investment is estimated at a minimum of PLN5.5bn and exceeds the value of the group itself). The project will be carried out together with Enea, but it may be necessary to acquire further co-investors. Some companies consider the possible sale of a part of the shares in the projects for the construction of new power plants in order to avoid increased debt.

A major problem for the sector is also the decline in energy prices which reduces the profitability of future investments and adversely affects the financial capabilities of companies.  Because of this, the perspective and shape of the planned introduction of the so-called power market, i.e. a system that is supposed to guarantee the profitability of investments in the energy sector and to ensure the financing of these investments, and ultimately maintain the security of energy supply for the recipients, is of essential importance to the energy sector. In this system, energy producers are to be remunerated not only for the produced and sold energy, but also for maintaining their readiness for its production, which is supposed to encourage the maintenance of the existing generating capacities and facilitate decisions on the construction of new blocks.

The initial assumptions of the project of the power market were presented by the Ministry of Energy in July 2016, and the draft act is supposed to be ready by the end of this year. However, the approval of the European Commission for the introduction of the planned solutions is also required. The Ministry of Energy assumes that the legislation on the power market will enter into force from 2017.

The investment plans of the energy sector may also be affected by the capital involvement in the restructuring of the mining industry (read about the latest developments here https://www.obserwatorfinansowy.pl/poland/concessions-hinder-investment-in-mining-in-poland/). In accordance with the contract specifying the conditions of financial investment in the Polish Mining Group, concluded in April 2016 (read more here https://www.obserwatorfinansowy.pl/poland/coal-mines-in-poland-received-funds-now-they-must-deliver-results/), companies belonging to PGE, Energa and PGNiG will ultimately take up shares in the Polish Mining Group with a value of PLN0.5bn each (17.1% each). This involvement required the shifting of funds allocated by these companies for investment, and although the agreement does not provide for further funding, it means the participation of the investors in the group’s likely financial loss this year.

The remaining risk factors for investment in this sector include the shape of the EU climate policy, the high cost of coal extraction, the planned amendment of the water law (which may result in an increase in the cost of energy production), and the new tax burdens associated with the possible increase in the nominal value of shares of State Treasury enterprises. The prospects for development of the sector should clarify in the beginning of next year, when the Ministry of Energy is to announce new investments in the energy sector, along with the plan for their financing.

What will the future bring?

One of the problems that can be linked to the weak current level of investment in enterprises is the lack of sectoral investment plans harmonized with EU law.

For the time being, at least according to the studies of NBP, there are no indications that the situation will improve in the short term. The forecasts for the investments of the public sector enterprises until the end of the year are worse than in the previous quarter, and above all, still much lower than in the previous year. Further reductions in investment were announced, among others, by local government companies, and there is no sight of any breakthrough in the energy sector or the water and sewage sector before the end of the year.

Agnieszka Sawicka is an expert at the Economic Institute of NBP. The opinions expressed in the article are the private views of the author and are not an expression of the official position of NBP. 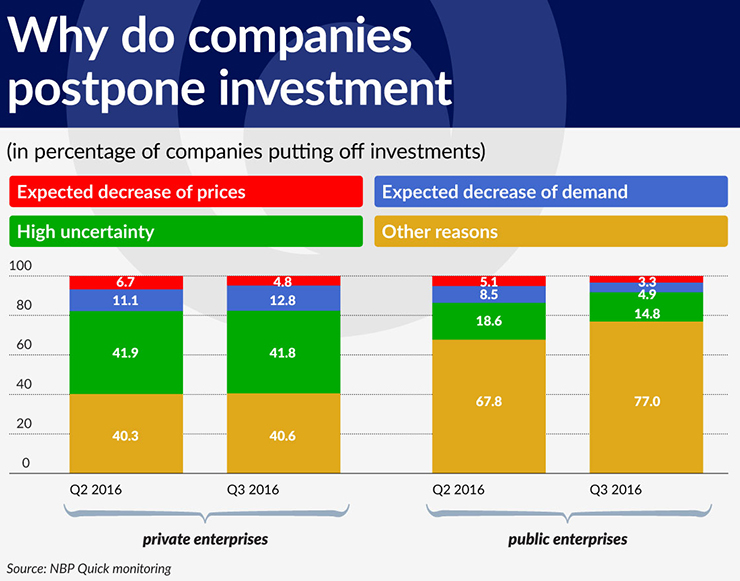 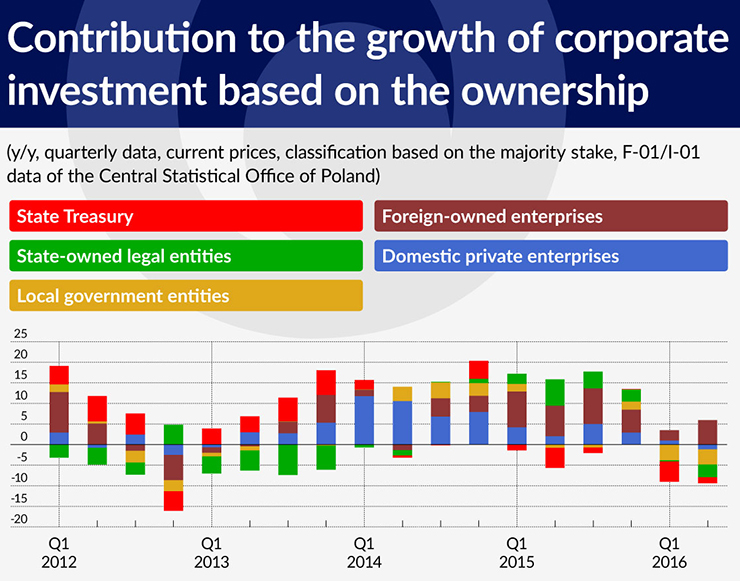 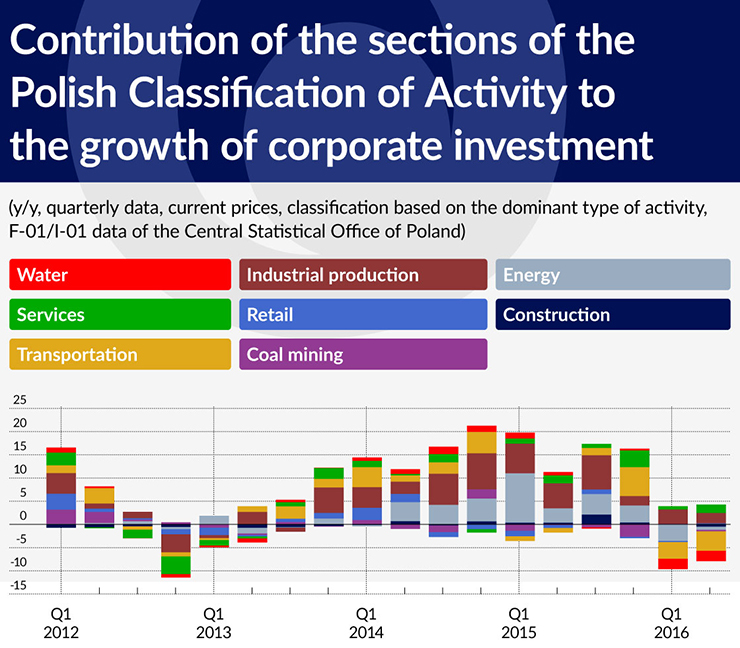