In H1'17, a clear economic recovery in the countries of Central and Southeast Europe is visible, with a permanent decline in unemployment and relatively high GDP growth compared to the rest of the European Union.

The economic recovery of Member States from Central and Southeast Europe (CSE) is confirmed by the analysis of the GDP growth rate. In the Q1, all countries from this region demonstrated a higher growth than the EU average (2.1 per cent). The highest growth was recorded in Romania (5.6 per cent – the highest across the European Union), Slovenia (5.0 per cent) and Poland (4.2 per cent). High growth, compared to the EU average, could also be demonstrated by Lithuania (4.1 per cent), Estonia (4.0 per cent), Latvia (4.0 per cent) and Hungary (3.8 per cent).

The lowest growth in this group was recorded in the Czech Republic (2.9 per cent) and Slovakia (3.1 per cent). These data refer to the percentage change in GDP relative to the first quarter of the previous year.

Besides the generally favorable international economic conditions, various other factors influence the improvement of the economic standing of CSE countries, such as growth of consumption, the development of foreign trade, growing labor productivity, job creation, industrial activity, measures undertaken by specific governments, etc.

The surprisingly good standing of the Romanian economy is worth particular attention, although after massive protests at the beginning of this year, the political situation in the country does not seem stable (at least for an external observer). In the meantime, Bucharest can boast the highest GDP growth in the whole EU, which has clearly exceeded the forecasts. The drivers of the Romanian economy include consumption strengthened by tax reductions (particularly VAT), as well as growth of pensions and the minimum wage. Unemployment is also falling systematically. However, it should be stressed that Romania still remains one of the poorest EU countries (alongside Bulgaria).

In CSE, the very good situation of the Czech economy attracts attention. Although the economic growth is lower than in other countries of the region, the country may be proud of its record low unemployment. According to Eurostat data, it stood at only 2.9 per cent in June. For this reason, entrepreneurs in the Czech Republic must hire workers from other countries, including Poland. On the other hand, the shortage of qualified workers (among others, in the automotive sector) enforces wage rises, which boosts household consumption.

The good economic situation is favorable not only for the Visegrad Group (V4) countries, but also for the remaining EU members from CSE. The Eurostat data indicate that almost all those countries have a lower unemployment rate than the EU average, which amounted to 7.7 per cent in June. Exceptions include Croatia (10.6 per cent – the highest rate in this group) and Latvia (8.3 per cent).

Among the EU countries exceptionally high unemployment is recorded in Greece (21.7 per cent in May) and Spain (17.1 per cent in June). Countries with a higher rate than the EU average also include Italy (11.1 per cent), France (9.6 per cent) and Portugal (9.0 per cent). These figures push the average unemployment rate of the 28 EU Member States significantly up. 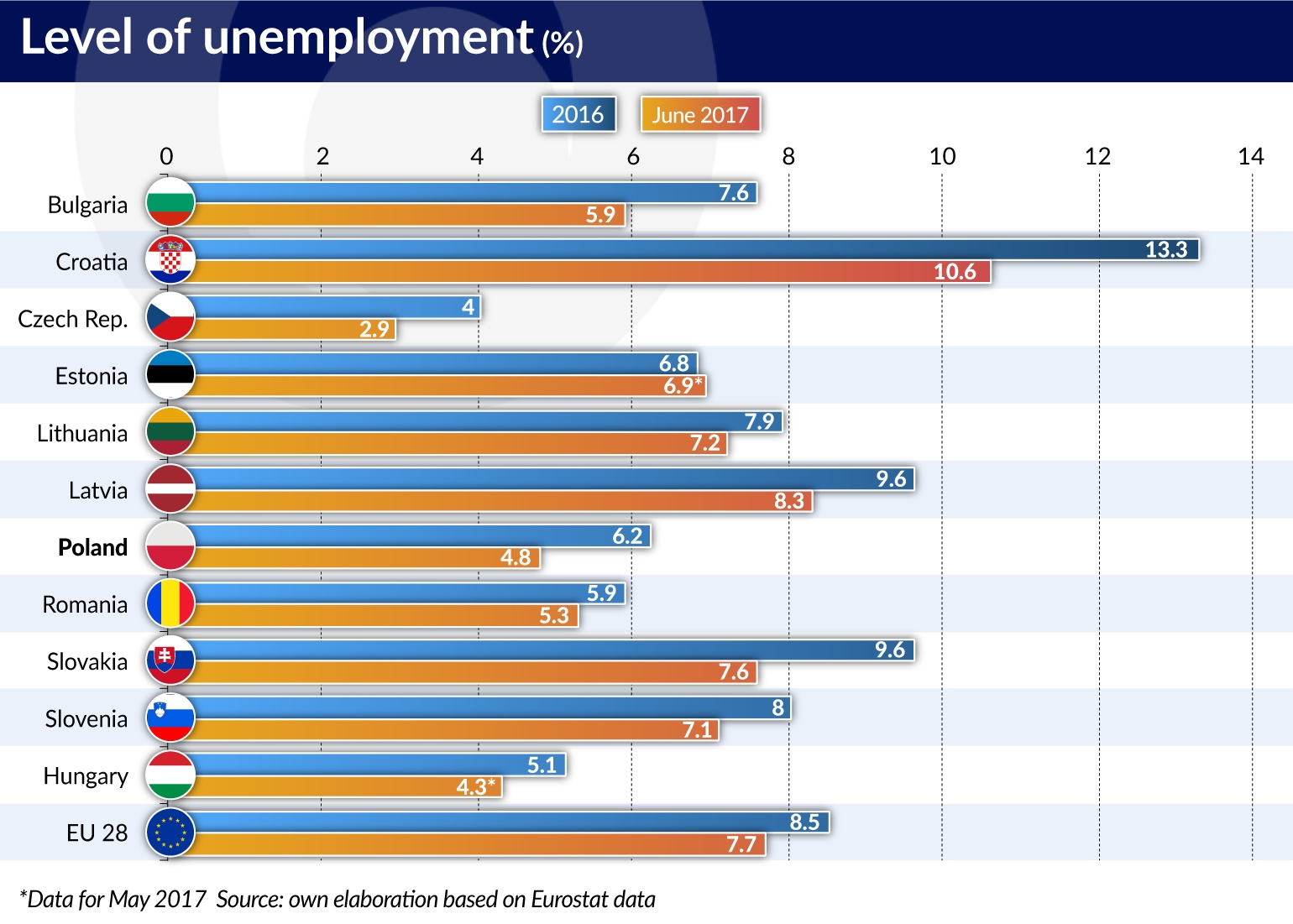 Hungary and Poland may also be proud of very low unemployment. In May, the unemployment rate in Hungary reached 4.3 per cent, which is an impressive result taking into consideration the fact that it was 10.2 per cent as late as 2013. Factors influencing a significant improvement of the situation in Hungary include a high industrial activity indicator, the development of the automotive sector and effective government measures (e.g. fiscal discipline, reduction of the public debt, tax reduction). In May, the PMI in Hungary reached almost 62 points, and although it has been decreasing since then, in each month of this year it has exceeded 54 points, in other words, it has been running above the equilibrium level (50 points).

The good economic results of CSE, in particular the fast decline of unemployment, should not encourage the projection of only positive scenarios for the future. A shortage of employees in the Czech Republic, Poland and Hungary may significantly inhibit the development of companies. According to the best scenario, employees may expect wage rises, whereas in the worst scenario, an outflow of capital – also domestic, could take place.

Something that is generally not mentioned by governments of CSE countries should also be emphasized. The decline in unemployment is often associated with the emigration of citizens to the wealthier countries of the European Union. The issue of encouraging their possible return should be a significant challenge for the governing authorities, particularly if we take into account that it is mainly the youngest and the most mobile generation in productive age that has emigrated.