A clear economic recovery is observed in Poland and the region of Central and Southeast Europe. GDP growth in Poland stood at 4 per cent in the Q1’2017, and the average for the Visegrad Group and Romania is 3.8 per cent. It is the fastest growing region of the EU.

This growth is due to temporary cyclical factors, shifts in the spending of European funds and a strong impetus from accelerating international trade. But there is also the structural strength of the region, in the form of companies that are becoming increasingly involved in global production chains.

The chains are organised mainly around German companies, so it seems legitimate to recall the old name of the region – Mitteleuropa. This name often evokes negative connotations, as historically it stands for Germany’s political domination in the region. Yet in the context of its economic expansion, a more positive traditional interpretation of the term is worth invoking, based on the vision of the region’s economic integration. All this, of course, is about integration around Germany, but in this case Germany not as an oppressor, but as a source of technology, capital and development.

In a recent analysis of industrial policy in Poland, the WiseEuropa economists, Maciej Bukowski and Aleksander Śniegocki, have written that the key to maintaining fast-paced long term growth will be “close integration with the closest industrial centre. In the case of Poland, such a centre is the so-called Europe Factory, organised around France and Germany”. Yet France plays a smaller role for the region than Germany. The metaphor of Poland often employed in public debates, as an assembly plant for Germany, is partly accurate, although overly contemptuous: more and more of the operations located in the country are far more advanced than simple assembly.

Manufacturing in the lead, services catching up fast

There are two broad sectors that are most involved in the inclusion into global chains – manufacturing and business services. The former is far more advanced than the latter in terms of internationalization. The latter, on the other hand, has great potential for further rapid development, thanks to convergence effects, i.e. the approach of the structures of peripheral economies to the economies in the center of Europe.

In order to demonstrate how Poland and the Central Europe are integrated into global production chains, I used the latest data from the so-called World Input-Output Tables. They show how particular sectors use each other’s products in the process of creating added value, by dividing these sectors among 40 countries. In this way, after the necessary treatment of the data and application of the so-called Leontieff model, we can answer a very important question: what is the share of added value generated in individual countries and sectors in the total production of a given country? In this way, we can analyse the real chain of added value, and not only a simple trade exchange.

When a German producer sells a car, the value of the car comprises the value added by the producer and the value of the materials and services used. But the latter, dubbed intermediate consumption, is the sale of other companies, which also includes added value and intermediate consumption. In other words, global production is always a result of a chain of added values generated at the respective production stages. For approx. 25 years an increasing portion of these stages has been distributed among international chains, the so-called global value chains. More about this methodology is available here.

In recent years, Central Europe (the Visegrad Group countries and Romania) has been very quickly incorporated in chains concentrated around German producers. The manufacturing sector of five countries of the region already supplies the German global production of goods and services a similar value as the manufacturers of France, Italy and Spain, and a significantly higher value than the USA. Central Europe is also more important than China and India combined.

The situation is slightly different when it comes to business services. In this area, Central Europe has made a big leap since the beginning of the century, more than doubling the sector’s value added to the global production of Germany. But the region is still lagging behind Western Europe and the USA. This results from the fact that the service sectors in those countries are much more advanced. 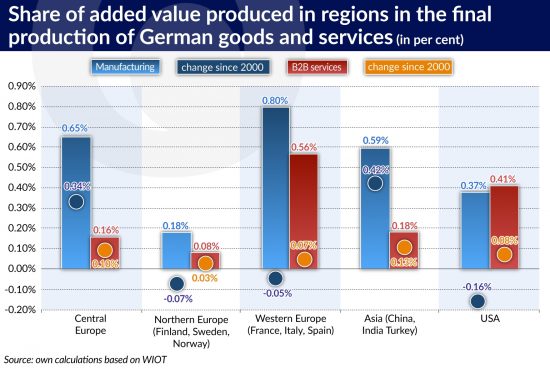 This is noted by the WiseEurope economists, who write that Poland (and the region) needs, apart from an improvement in industry efficiency, “to significantly increase the complexity of the service sector, which will enable the region to compete effectively in international markets, also when the role of manufacturing in GDP has diminished (which in the context of automation seems inevitable).”

Data from the intermediate consumption tables come from 2014, but the latest data on production and international trade suggest that the long-term process of integrating Central European economies in the Western European economic system has progressed at a robust pace. Exports of goods are rising faster than GDP – in 2016 this trend was temporarily halted only to return with full force at the end of 2016. Among other things, the share of manufacturing in added value in Poland exceeded 20 per cent, which, disregarding seasonal factors, happened for the first time since the mid-1990s.

At the same time, exports of services are growing fast, with higher momentum than goods exports. Among services, exports of telecommunications services and other business services are rising at the fastest pace, which confirms the trend of inclusion of these sectors in global production chains.

Data published by trade organisations are also worth a look. For example, the Association of Business Service Leaders (ABSL) estimates that in Poland the so-called service centers providing services for international clients, which in 2016 employed 212 thousand people, will have increased staffing levels to 300 thousand by 2020. The association’s analyst, Janusz Górecki, points out a significant trend, namely the growing complexity of tasks performed by the centers located in Poland: “The extension of the service portfolio and the share of advanced, knowledge-intensive tasks in the structure of services performed at the centers indicate the evolving nature of the sector and the centers’ rising role in implementing their parent companies’ global strategy.”

However, we cannot overlook the risks that Poland, the region and the dominant development model face. There are two key risks:

The first risk is associated with the growing protectionist sentiment among Western decision-makers. The claim that governments should better protect domestic production for political reasons is being proclaimed not only by the extreme left- or right-wing parties, but also by the so-called mainstream. The statement of the liberal economist Lawrence Summers on the need for “responsible nationalism” is the best example of this.

The French President, Emmanuel Macron, cherished by liberals, openly states that Central European countries must not compete with low wages, despite the fact that it is a natural competition model for the countries which do not have such capital and technological resources as Western countries.

The second risk is related to the mismatch between economic policy and demographic trends, and more broadly, civilization trends. The societies of Central Europe are aging at the fastest pace in the world, which will put the health-care and retirement systems under pressure. Additionally, funding from the EU after 2022 may be much more modest than today. These changes may require a profound adjustment in public finance and economic policy. Unfortunately experience shows that radical changes are most often introduced during an acute crisis. Bearing in mind the example of Hungary in the years 2006-2016, when it hardly developed, regional policy-makers should remember that economic growth is not given once and for all. 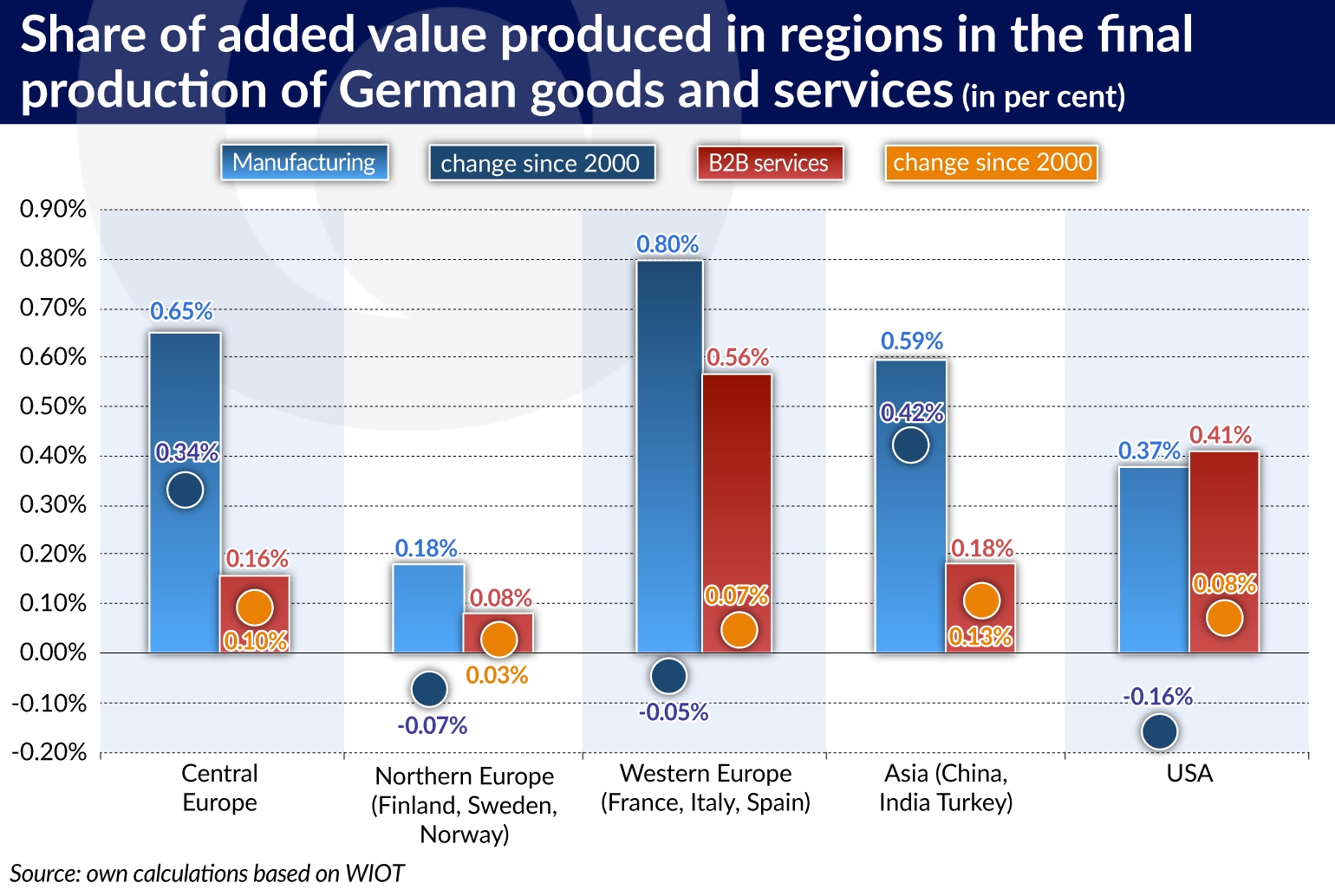