The stabilizing expenditure rule was introduced to the Public Finance Act in late 2013. It implemented the European Union’s fiscal policy requirements set out in Directive 2011/85/EU. In accordance with that directive, the governments of the member states should introduce fiscal rules which will enable them to avoid excessive deficit or public debt levels.

Fiscal rules in the European Union

The EU Directive does not impose a specific structure of the fiscal rules. There are several types of rules:

The fiscal rules are contained in the Maastricht Treaty – a public debt limit of 60 per cent in relation to GDP and a fiscal deficit limit of 3 per cent in relation to GDP. Even harsher restrictions are contained in the Treaty on Stability, Coordination and Governance in the Economic and Monetary Union, which is commonly known as the Fiscal Pact. In accordance with the pact, the structural deficit may not exceed 0.5 per cent of GDP, and in less-indebted countries – 1 per cent of GDP. The treaty entered into force in 2014 and applies throughout the European Union, with the exception of the Czech Republic and the United Kingdom.

Fiscal rules have also been introduced to the national legislation. They may take the form of laws, regulations or government declarations, and may even be included in the Constitution. However, they do not automatically guarantee that policies aimed at fiscal equilibrium and maintaining a low level of debt will be pursued. There is a problem with the reliability of the fiscal formulas and the supervision over their enforcement.

In the European Union we can identify two extreme cases: Germany and the Czech Republic – countries that both achieved budget surpluses in 2016 and reduced their public debt. In Germany, a balanced budget rule relating to the structural deficit has been in force since 2011. It was written into the constitution in 2009. The structural deficit of the central government cannot exceed 0.35 per cent of the GDP, and the finances of the individual federal States have to be structurally balanced. An expenditure rule has also been in place since 2008 – the expenditure of the central government and the federal States cannot increase more than 1 per cent per year.

In the Czech Republic there are no fiscal rules, but the government is conducting a responsible fiscal policy. The general government deficit, which amounted to 3.9 per cent in 2012, was lowered in the following  years in spite of the recession.

In Italy a constitutional amendment was adopted in April 2012, introducing the principle of a structurally balanced budget, which is in line with the principles of the Fiscal Pact. The government presented a Stabilization Program for 2013-2017 (approved by the parliament), which aimed to reduce the nominal deficit to 1.8 per cent in 2016. In reality the deficit exceeded 2 per cent, and to make matters even worse, the structural deficit, which should not exceed 0.5 per cent of GDP, amounted to 1.6 per cent according to European Commission’s forecasts. As a result, Italy’s public debt in relation to GDP increased from 132.3 per cent to 132.8 per cent.

In Hungary, Article 36 of the Constitution in force since 2012 states that as long as public debt exceeds 50 per cent of GDP, the parliament may only pass budget laws which will cause the reduction of the debt. Derogations from this rule can only be justified by a recession and require a separate decision of the parliament. If the debt is higher than 50 per cent of GDP, the Constitutional Court evaluates every act affecting public finances for its compliance with the fiscal target – the reduction of the debt. As a result, since 2012 Hungary’s public debt has decreased from 78.2 per cent of GDP to 74.7 per cent of GDP in 2015 and 73.5 per cent in 2016 (according to European Commission’s forecasts).

The application of fiscal rules did not prevent the rapid growth of debt in countries that have suffered due to the financial crisis. Examples include Cyprus and Slovenia, whose debt-to-GDP ratios increased in 2010-2016 by 51.6 percentage points and 42.5 percentage points, respectively. Cyprus has had an expenditure rule in force since 2014. In Slovenia, the expenditure rule was introduced in 2011. If the primary budget deficit and the general government debt in relation to GDP exceed the established targets, any increases in budget expenditure must remain in a certain proportion to the projected nominal GDP growth. These parameters are set for two years and then indexed for two more years. But in 2013 both Cyprus and Slovenia underwent banking crises. The operation of bailing out banks with taxpayer money has led to high deficits and a rapid increase in debt in these countries.

In spite of the EU directive recommending the application of the fiscal rules and the supervision of the implementation of the medium-term budget targets resulting from the Fiscal Pact, in 2010-2016 only seven EU member states reduced their debt-to-GDP ratio. These were Germany, Ireland, Latvia, Malta, Hungary, Denmark and the Czech Republic. In twelve countries the public debt increased by more than 10 percentage points. 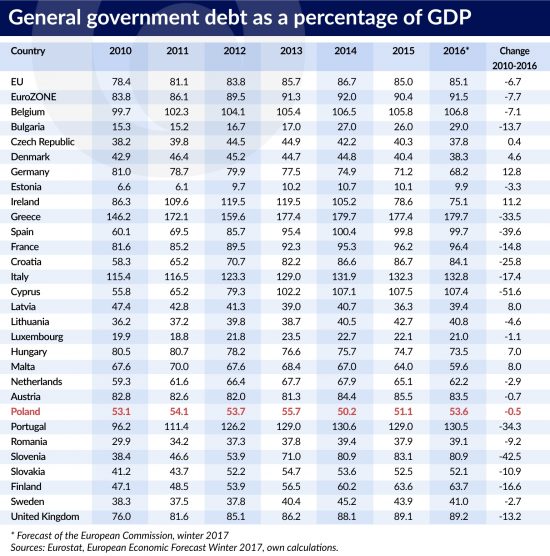 Poland ranks in the middle of the list. In 2010-2016 Poland’s debt increased by 0.5 percentage points, but at the beginning of 2014 the government took over the assets of the Open Pension Funds worth 7 per cent of GDP in 2016. If not for this operation, Poland’s public debt would already exceed 60 per cent of GDP today, and the general government debt would stand at approx. 62 per cent. According to the forecast of the European Commission, at the end of 2016 Poland’s debt (calculated according to the European Union’s methodology) stood at 53.6 per cent. This figure is most likely underestimated. In reality Poland’s debt most likely exceeded 55 per cent.

This second sentence weakens the constitutional provision, because any parliamentary majority can change the definition of the public debt. The prudential thresholds introduced in the Public Finance Act of 2009 also have not provided sufficient protection against the increase in debt. In 2013, the above mentioned Act was amended and the first threshold of 50 per cent of debt to GDP ratio was abolished. The financial markets saw this as a clear signal – in the event of a further increase in debt the threshold of 55 per cent would also disappear.

In December 2013, a stabilizing expenditure rule was introduced in the amended Public Finance Act. It is described in Article 112aa of the aforementioned Act. It was first used in the preparation of the 2015 budget.

It has been very controversial from the beginning. Its critics emphasized two main weaknesses of the rule.

Secondly, the formula defining the limit of expenditure contains the component En(∆DDn), i.e. the projected total value of discretionary measures leading to changes in taxes and social security contributions.

There are also controversies regarding the formula determining the increases in expenditure in relation to nominal GDP increases. Nominal GDP growth is calculated as the multi-annual average of real and projected values. The latter may contain errors.

Another weakness of the stabilizing expenditure rule lies in the imprecise definition of sanctions for its violation. In many countries, the introduction of fiscal rules has been strengthened by the establishment of an independent body controlling the state finances, having access to budget information and authorized to block improperly structured budgets. In Poland, such a body has not been established, and the Public Finance Act does not specify the penalties in the event that the expenditure resulting from the rule is exceeded. The implementation of the budget is controlled by the Supreme Audit Office.

What to do in order not to get in further debt

Based on the analysis of Poland’s data for 2015 and 2016, it is clear that the expenditure rule does not stop an increase of the public debt. And we are talking about two years of relative prosperity, when the government did not have to employ any counter-cyclical measures. If there is a year where the GDP growth rate drops below 2 per cent, public debt will get near the level of 60 per cent of GDP.

In order to stop the further increase of the Poland’s public debt, it would be necessary to:

The reduction of the state deficit is not an unpleasant requirement, resulting from EU regulations, but an important instrument to boost the growth of the national economy. 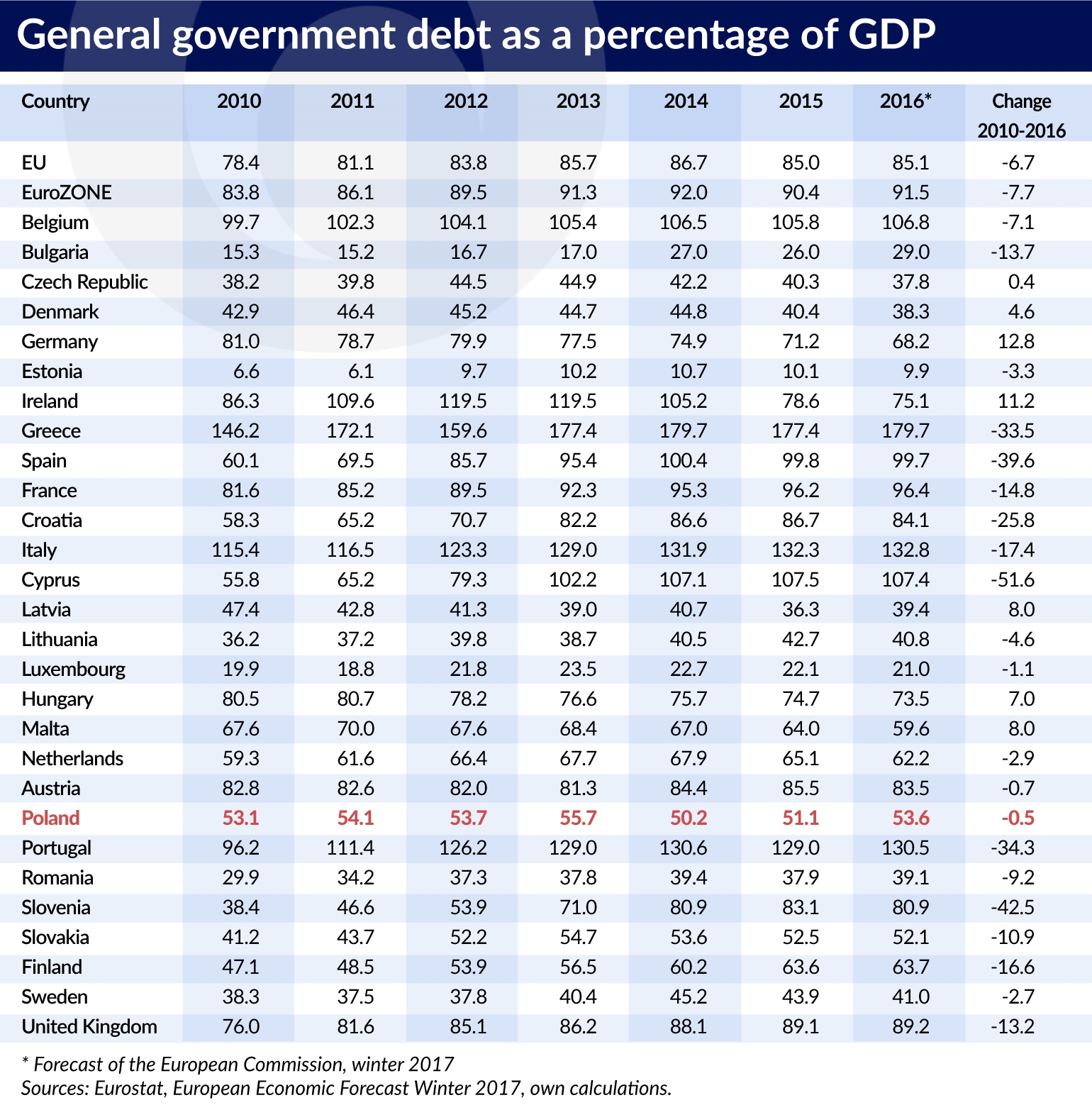 Category: Macroeconomics 03.06.2020
So far, Poland has maintained strong economic growth for several years. Thanks to that, the situation of public finances has also improved. The crisis we will face in the coming months and the need to increase spending to support the locked down economy will deteriorate the condition of the budget. 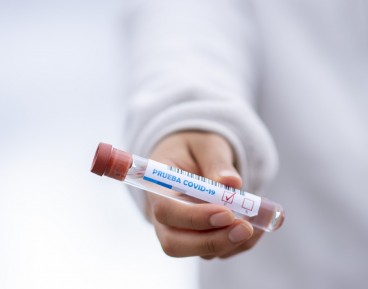