The growth dynamics of foreign debt and the share of foreign investors in sovereign Polish debt has been unusually high in recent years.

According to Eurostat data, at the end of 2014 Poland was ranked 11th in the EU in terms of the share of non-residents’ holdings of government debt.

Since 2007, the importance of foreign financing of Poland’s external debt has systematically increased. Between 2007 and 2014, the nominal value of Polish public debt (calculated as per the place of debt issuance) more than doubled: from PLN124bn to PLN292bn, while the share of foreign debt in total sovereign debt rose from 24 per cent to 35 per cent. The involvement of foreign investors in Polish sovereign debt is also on the rise, they are more and more eager to buy not just the public debt issued abroad but also Poland’s domestically issued debt.

At the end of 2014, more than half of Poland’s debt was held by foreign investors (PLN472bn, i.e. 57 per cent of government debt). Back in 2008, their share was a mere 34 per cent. A particularly rapid growth of Polish debt in foreign hands was noted in 2009–11. At the end of 2008, its value totaled at PLN201bn, at the end of 2011 it was already PLN401bn. The increase in the foreign share of Poland’s sovereign debt was also influenced by the 2014 redemption of bonds held by open pension funds (OFE) which resulted in lowering the assets of the domestic non-bank sector. 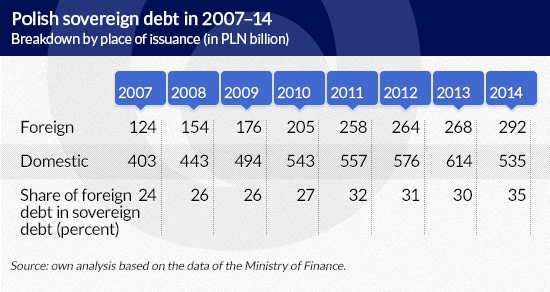 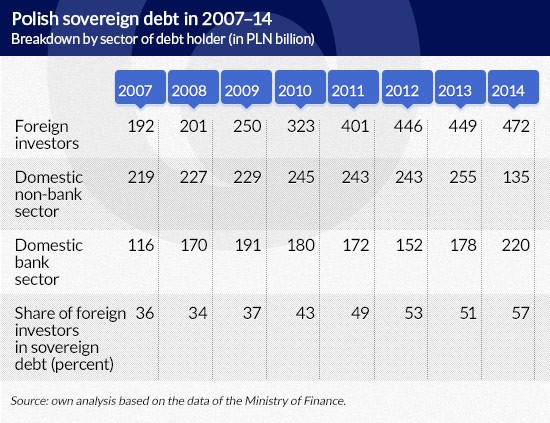 The growing role of non-residents in financing Polish sovereign debt has its source in the relatively low domestic savings, which – given the state’s ever greater borrowing needs resulting from chronically unbalanced public finances – limits domestic demand for treasury securities. Foreign financing does not engender the crowding out effect, which consists in limiting domestic investment as a result of the available (already moderate) funds being absorbed by the public sector.

At the same time, quantitative easing programs implemented in other countries which stimulate demand for emerging market bonds (and Poland is still classified as one), have been conducive to the inflow of foreign capital. In view of the high foreign demand and increased scope of issue of Polish bonds on foreign markets (characterized by low interest rates), interest on Poland’s debt is gradually becoming lower. The average interest rate of 10-year bonds dropped from 6.1 per cent in 2008 to 3.5 per cent in 2014. Foreign debt is also characterized by longer maturities than domestic debt: in 2014, the average maturity of foreign debt amounted to 7.1 years, and domestic debt – to 4.2 years.

Nevertheless, the growing importance of foreign financing of Poland’s external debt should be viewed with a dose of skepticism. Economic literature indicates that the public authorities’ growing reliance on foreign markets in terms of debt issuance, driven mostly by lower financing costs, may be extremely dangerous. Foreign debt exposure has been the fundamental cause of several debt crises, e.g. those affecting Mexico and Argentina in the 1990s.

…but greater risk of a crisis

At the end of 2014, 25 per cent of the State Treasury’s debt was denominated in euro, 7 per cent in US dollars, 2 per cent in Swiss franc and 2 per cent in Japanese yen. Some economists, such as B. Eichengreen or R. Hausmann, refer to the developing states’ inability to borrow abroad in their own currency as the “original sin”, describing it as one of the most important sources of national debt crises.

However, the dangers of foreign debt financing are not just associated with currency risk. Foreign investors, irrespective of the currency in which they hold the given country’s debt, are regarded as a less stable source of financing than domestic investors. To provide an example: a London trader will immediately react to changing market conditions, sell Polish bonds and transfer his capital to other markets that will guarantee a higher rate of return or a similar rate of return with lower risk. This is particularly problematic if there is a slump in the economy, when a refusal to refinance debt may result in skyrocketing servicing costs and sovereign debt crisis.

Theoretically, domestic investors may also take this path, but in practice they are always more reluctant to transfer their capital to other markets. Japan is an oft-quoted example of this rule: its sovereign debt amounts to ca. 250 per cent of GDP, yet it is principally financed by domestic savings. Consequently, the country’s financial situation is relatively stable and its debt servicing costs are among the lowest in the world. The case of Greece or Spain, which were both affected by sovereign debt crises despite a lower debt to GDP rate than in Japan, is completely opposite.

The example of Greece also demonstrates that a high share of foreign investors in financing debt may, in extreme cases, limit the possibilities of pursuing an autonomous economic policy. When shaping the debt structure, it is also worth noticing one other simple relationship: the interest rate on debt held by domestic investors contributes to the income of domestic institutions or citizens. Such interest increases domestic savings or consumption, and to a certain extent returns to the state budget.

The structure of Polish debt requires a debate

The risks associated with foreign financing of sovereign debt are only revealed in times of crisis. And this is why there is a relatively low media coverage of this problem in Poland. Yet this is all the more reason not to ignore it. In order to reverse the trend of the growing share of foreign debt holders, we need to both increase domestic savings, in particular among households and natural persons, and amend the policy of issuing debt by the Ministry of Finance.