How stable are the Balkans?

Kosovo, Bosnia and Herzegovina and Macedonia used to be the economically poorest and least developed regions in the former Yugoslavia. Today, they are still far away from being on the right path to welfare and prosperity.

The most significant direct threats to the regional peace in the Balkans are the disputes over Kosovo, Bosnian and Macedonian statehood. All three issues are reinvigorated by poor economic performance, high level of corruption and nepotism and generally poor level of the state management. Such circumstances constitute a perfect ground for political cleavages and radicalization, these division go often along ethnic lines, and subsequently introduce additional emotional factor into public discourse.

In general, however, we can observe conflicts that combine both domestic and international features, with strong involvement of neighboring countries, as well as more significant international players, such as United States, the EU, mainly Germany, Austria and Italy, and Russia or Turkey.

Securitization in the slang of international relations means that the particular object of the conflict has been presented by the elites in the public discourse as a threat to a security of a particular group, nation or an ethnic minority. For example, during the break of Yugoslavia, the proposal of the other side has been usually presented as vital threat to one’s own group. Subsequently this stage of the conflict reflects its escalation.

In case of modern Balkans, however, there are number of economic factors that indicate desecuritization of the relation between the relevant parties. The issues are actually losing their “vital” character and are being “downgraded” to the “normal” political level of dispute. In Bosnia and Herzegovina none of the competing entities, neither Federation of BiH, nor Republika Srpska is exploiting each other, they remain as separate economies, depending mostly on an external assistance. Similar relations are between Serbia and Kosovo with lack of official contacts between the two, or (re)establishment of stronger economic ties and therefore also economic exploitation one by another.

In Macedonia political conflict between the ruling VMRO DPMNE and remaining in opposition SDSM blurred even ongoing tensions between Macedonian Slavs and ethnic Albanians inhabiting the country. A corruption and misallocation of state funds, rather than exploitation of one side by another, are the reasons of a generally poor economic performance.

None of the countries lack natural resources (except for gas and oil). In fact, poor economic performance resulted in drastic cut in demand for such goods. So none of the countries of the region  desires particular raw materials that are owned or controlled by the other side. There is no possibility of gas, oil or water conflict. In fact, the whole region is reach in raw, non-strategic materials (coal, zinc, copper, etc.). However, lack of demand, old technologies and changes in the world markets do not allow their development, use and sale on the larger scale and in the manner that would enable development of the whole economy.

Economic factors would suggest in fact something more – depoliticization, i.e. further de-escalation of the conflicts. It means, in practice, that the differences between opponents are no longer the subject of high level political debate. Balkans depend on the foreign assistance. The most subordinated in this sense is BiH and Kosovo, as they receive substantial financial help mostly from the Western countries and institutions, such as: the European Union or the World Bank. Macedonia and Serbia depends on the EU indirectly. However, influence of other players such as: US, Russia, Turkey, China or the Middle East countries leaves some room for maneuver.

There are factors that indicate something opposite – that the Balkan stability has a negative perspective. Economic situation of almost all the regional actors is very bad or bad. According to the Balkan Economic Forum the global financial crisis hit the Balkans twofold.

Firstly, it resulted in an “increase in national debt levels”. Secondly, it led to decline in: “European and international market demand for Balkan products and raw materials; foreign direct investments; and remittance payments which are the wages and savings that are repatriated by Balkan emigrants living elsewhere and which represent significant and valuable foreign currency exchange”. Even Croatia, which has joined the European Union, still faces some serious challenges increasing social dissatisfaction with the government and economic policy (read more about the Economic Freedom in Balkans). Balkan states has not yet fund receipt for parallel economic and social development. That means that despite the engagement of the EU, that seeks stabilization in its immediate neighborhood, the situation there is bad enough for politicization of various issues.

In reality, constitutional shape of the state and level of decentralization do not determine development of the country and social welfare. So the issues of the state’s shape is misused by the elites for their own political benefit and not approached from constructive perspective.

More importantly, in all the cases, although to various degree, there is a growing gap between the ruling and possessing class on the one hand and the rest of population on the other. High unemployment rate and low wages are easily used as a weapon. The discrepancy in income and socio-economic position would also mean that the elites are more likely to escalate the conflict regardless of the “human loses”.

Adding to the picture other-non economic factors, the future of the region is unstable and has potential for further escalation. Almost all sides of the conflicts expect and receive external support, although without clear divisions. For example Bosniaks are supported by the worldwide Arab community, including Turkey, but also by some of the strongest EU member states. Russia traditionally supports Serbs. Ankara holds its foot also in Macedonia. United States is very influential among the Albanian elites.

That means that the local elites feel more self-confident but also that any turbulences between the great powers are more likely to increase tensions in the Balkans, as a proxy conflict. Russia for example perceives conflicts in the region as an opportunity to weaken the EU and NATO. In other words, relations between the nations do not encourage of rapprochement between the parties.

The list of factors increasing potential of the conflict is longer. The historical discourse of the relations between the fractions is dominated by political conflicts and  hostility and is often accompanied by the dispute putting under question national identity of one of the sides of the conflict, as well as “historical” question – who has inhabited the lands as the first? There is general lack of trust between the nations, although in the Bosnian case there is a mechanism of self-propelling nationalism put into motion. Increase of one nationalism propels nationalism of another side. As we said earlier, in all cases, although to a various degree, the idea of statehood or nationality is raised. It is difficult to “degrade” these sort of issues to technical level, especially under economic, international and political conditions.

The parliamentarian and presidential elections are very often won by the side which claims more radical solutions to already existing problems, i.e. their higher politicization. If not, the new ruling elites are accused by opposition of being too submissive toward the opponent. Subsequently, the agreements between the hostile parties is only partial and does not solve the substance of the problem. The question of nationality or statehood limits the freedom of negotiators. For example Bulgarians recognized Macedonians as (separate) nation “only” in political terms. In other words, they accept Macedonian choice of having separate state and political identity, but at the same time Sofia claims culturally Macedonians are Bulgarians. The compromise has been fund although for Macedonians it is still far away from being satisfactory. 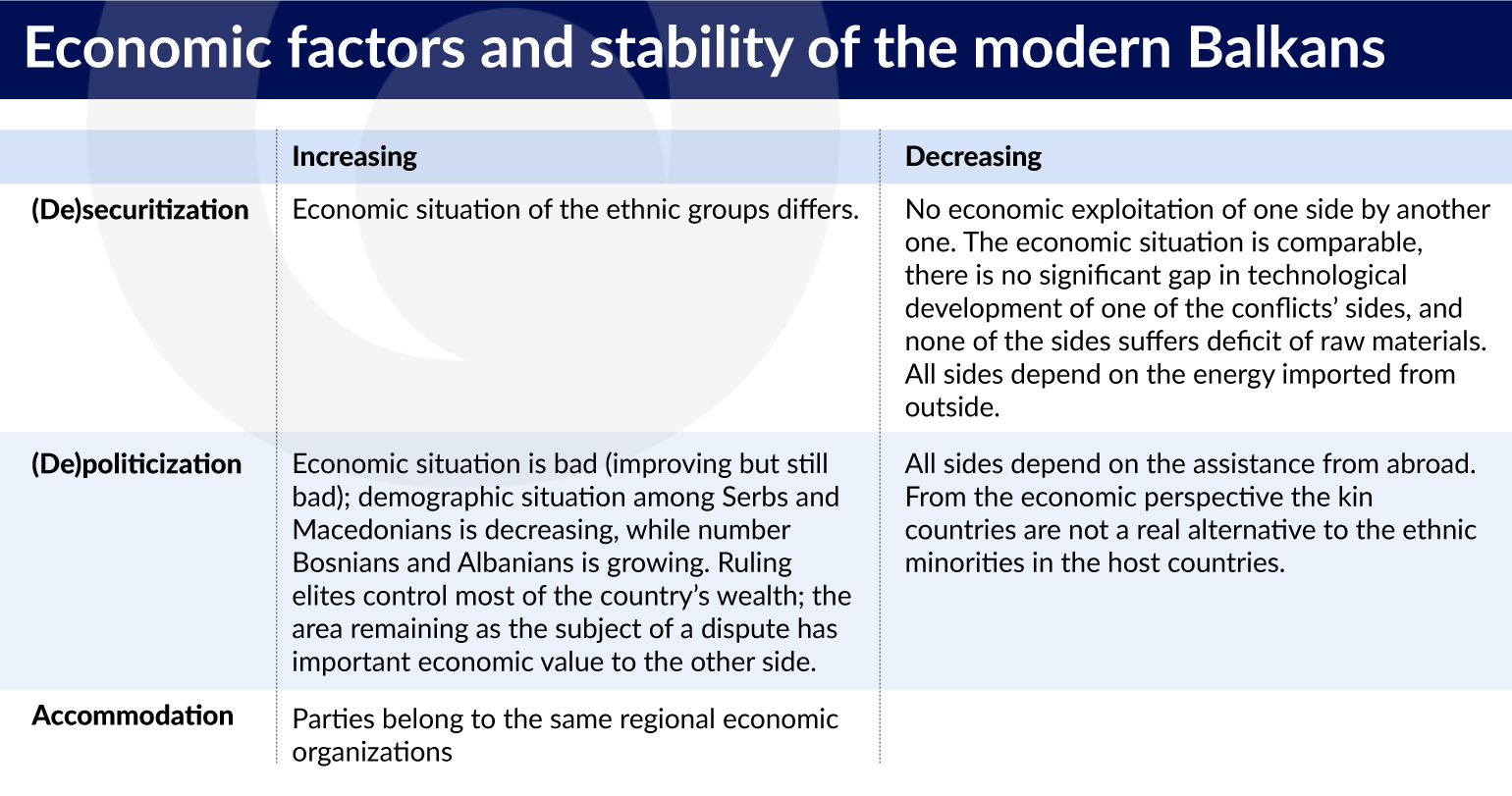 Taking into account that the economic factors “hold up” the conflicts at the level of politicization it is important to emphasize their significance. International environment in the times of a possible new cold war may create a new proxy wars and conflicts. Adding to this the ethnicization of politics, the situation results either in a growing number of issues intractable to the mutual technical adjustment, or, more often, in increasing amount of political capital and public funds needed for reconciliation. In such circumstances it is economy that can stabilize what is unstable, or deteriorate what has been already settled. One way or another, the European Union including the main European players need to assist these countries in getting back on their feet. Simple association and trade agreements are not enough and sometimes counter-productive.