A brief examination of the economic reforms carried out by the Fidesz government following its return to power in 2010 shows that assigning them to any specific economic doctrine or theory is extremely difficult. On the one hand, Hungary could be seen as a country undergoing changes in the spirit of economic liberalism (the introduction of a low flat tax rate, reduction of PIT and CIT rates). On the other hand, it’s difficult not to notice such measures as the banking taxes, the introduction of a high VAT rate, and the nationalization of the Open Pension Funds, which resembles the policies of interventionism.

This is why both the supporters of far-reaching free market solutions as well as their ardent opponents will be able to find a few examples of activities for which they would either praise or criticize Orbán’s government.

The unorthodox policies of Orbán’s government are based on three pillars that are connected:

The stunning electoral victory of Fidesz in 2010 would not have been possible without the people’s frustration with the country’s terrible economic condition. As many as 4 million Hungarians, out of less than 10 million inhabitants were living below the poverty level. The unemployment rate increased to 11.2 per cent.

Two years earlier, in 2008, Hungary became the first EU country forced to ask for financial aid, and received a EUR20bn loan. According to the Eurostat data, GDP growth in Hungary fell from 4.4 per cent in 2005 to well below zero in 2009. In 2010 growth rebounded to 0.7 per cent. The country seemed to be on the verge of bankruptcy.

The economic reforms of Orbán’s government were guided by the idea that ordinary citizens should bear as little of the burden of the reforms as possible. Therefore the government decided to pass the burden of debt repayment, among others, to the foreign banks and commercial chain stores. This was bound to cause a conflict with the world of finance.

The main assumption of Orbán’s unorthodox economic policies is the attempt to rely on domestic sources of financing. Fidesz politicians consider it a mistake to primarily rely on foreign investors, and associate it with the threat of foreign influence on Hungary’s internal politics. That is why reforms were focused on promoting domestic enterprises and increase workforce participation among the citizens.

For this purpose, the government decreased PIT and CIT rates, and introduced a flat tax rate of 16 per cent, later reduced to 15 per cent. Families with children are granted tax exemptions. This is aimed at changing the unfavorable demographic trends, and the savings are supposed to boost consumption or help in the repayment of loans.

The government also introduced a very flexible labor law in order to increase employment. The reform of the education system was geared towards the vocational training of teenagers. This is supposed to produce school graduates that meet the needs of the labor market. Similar changes were made at the level of higher education, where technical courses are promoted. 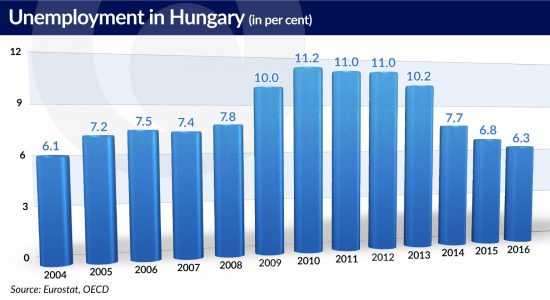 However, the driving force of Hungary’s economy, generating a significant percentage of the jobs, are still factories of foreign automotive companies, including Mercedes in Keckemét, Audi in Győr and Suzuki in Esztergom. According to a report prepared by the Hungarian government in 2015 (latest data available), the automotive industry employs over 143,000 people and generates 20 per cent of the national exports. More than 525,000 passenger cars left Hungarian factories, 87 per cent of which went to the markets of the EU countries.

Reduction of the debt and deficit

There were also concerns that Hungary would become a country avoided by foreign investors. In defense of his policies, Orbán can now invoke the fact that in 2012, for the first time since the accession to the European Union, Hungary’s deficit fell below 3 per cent of GDP. 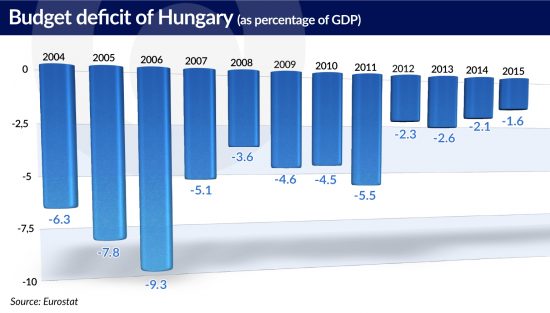 One very important element on the path to increased financial independence was the repayment of the IMF loan, which was taken by the previous government. The introduced reforms, including the banking tax, were opposed by the IMF, as a result of which the Hungarian government accused the organization of being mainly concerned with the interests of the banks. Hungary ultimately managed to repay the IMF loan in 2016. Interestingly enough, IMF has started praising the country for its effective macroeconomic policy. Despite this, Orbán’s government followed through on its previous decision and closed the IMF office in Budapest.

Stimulating the entrepreneurship of Hungarians and promoting domestic business has become an important issue for the government. Because of this, all the reforms were initiated with the assumption that their costs should be borne by the large, usually multi-national companies, and not by the Hungarian entrepreneurs. The banking tax was imposed as early as in 2010, but additional taxes were also introduced for telecommunication, energy and retail chains companies. The government also increased the VAT rate (up to 27 per cent, which is the highest rate in the EU, although recently the rates on selected products have been lowered).

Hungary’s unorthodox economic policies are primarily influenced by PM Orbán, who loves to break widely accepted rules. His government has exhibited an unconventional approach to necessary changes in the name of rescuing the country’s finances. The Orbán’s cabinet has not adopted a typical policy of searching for savings mainly from the pockets of ordinary citizens, but instead charged the costs of reforms to large business. There was a reason for concern that such measures could drive investors out of the country and put Hungary in an even more difficult position.

Hungary has one of the highest ratios of foreign direct investment (FDI) in relation to GDP among the countries of Central Europe. In 2013 it reached 80.7 per cent, in 2014 – 71.5 per cent, and in 2015 – 76.4 per cent. There is no data for 2016 yet. According to UNCTAD, the value of FDI projects in these years amounted to USD108.5bn, USD98.9bn and USD92.1bn, respectively. A certain decrease is noticeable, but at the same time investment is growing in sectors requiring more advanced technologies.

The critics of Orbán raise the issue of the oligarchization of the Hungarian state. There are also allegations of corruption at the highest levels of government. This, however, does not significantly weaken Fidesz, which has been able to convince over 30 per cent of the citizens that Hungary is going in the right direction.

An important role in this is played by EU subsidies, which are used to finance many public investments. In his rhetoric, Orbán often criticizes EU policies. It should be emphasized, however, that he separates economic issues from political issues, which can be clearly seen in the example of Hungarian-German relations. It seems that Hungary, which is not rich in natural resources (it has some deposits, among others, the mines in Tatabanya, although they are relatively small), is doomed to rely on foreign capital. This, however, does not invalidate the measures taken in order to increase the role and participation of the domestically financed State treasury in the development of the economy. 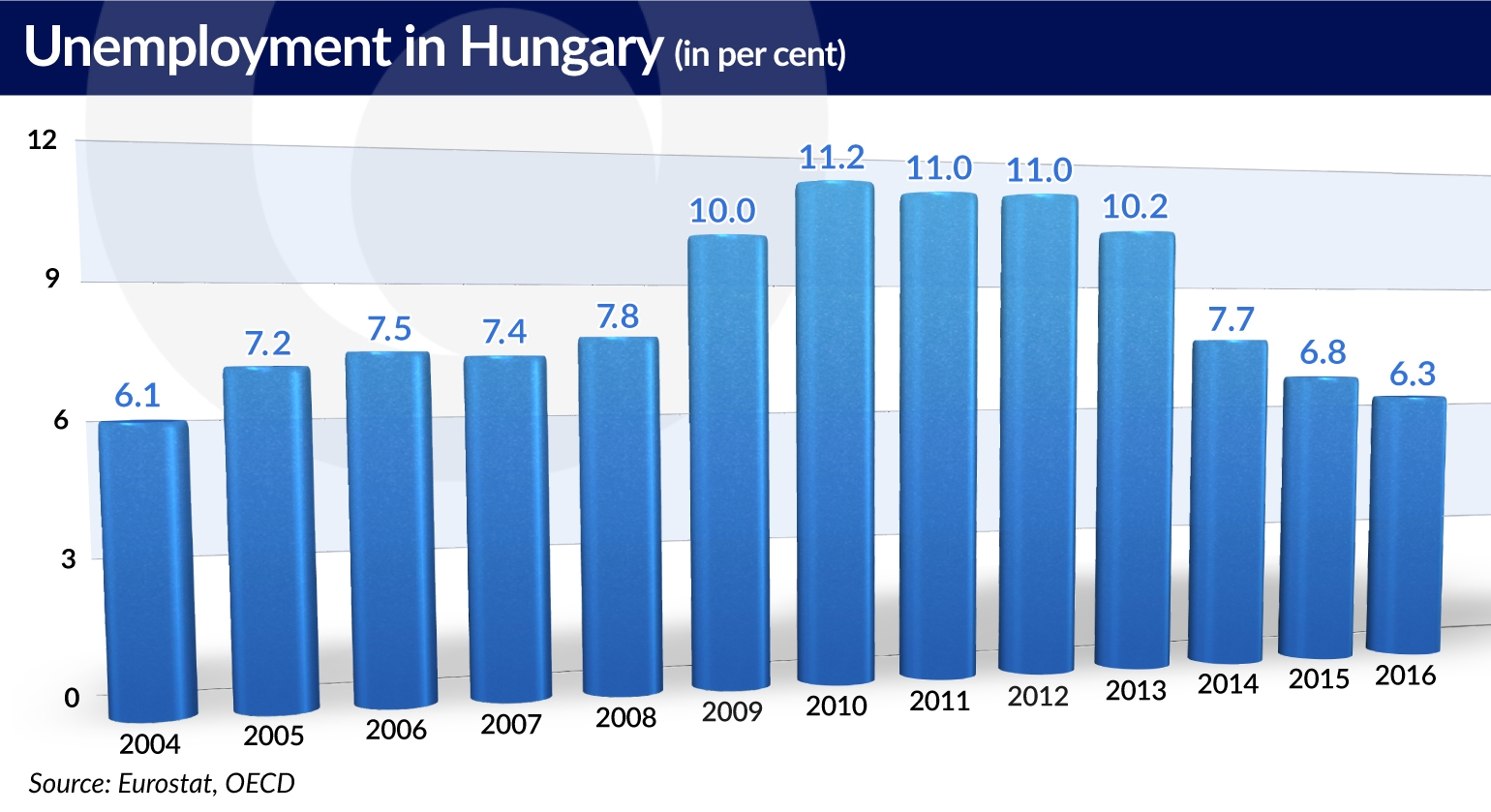 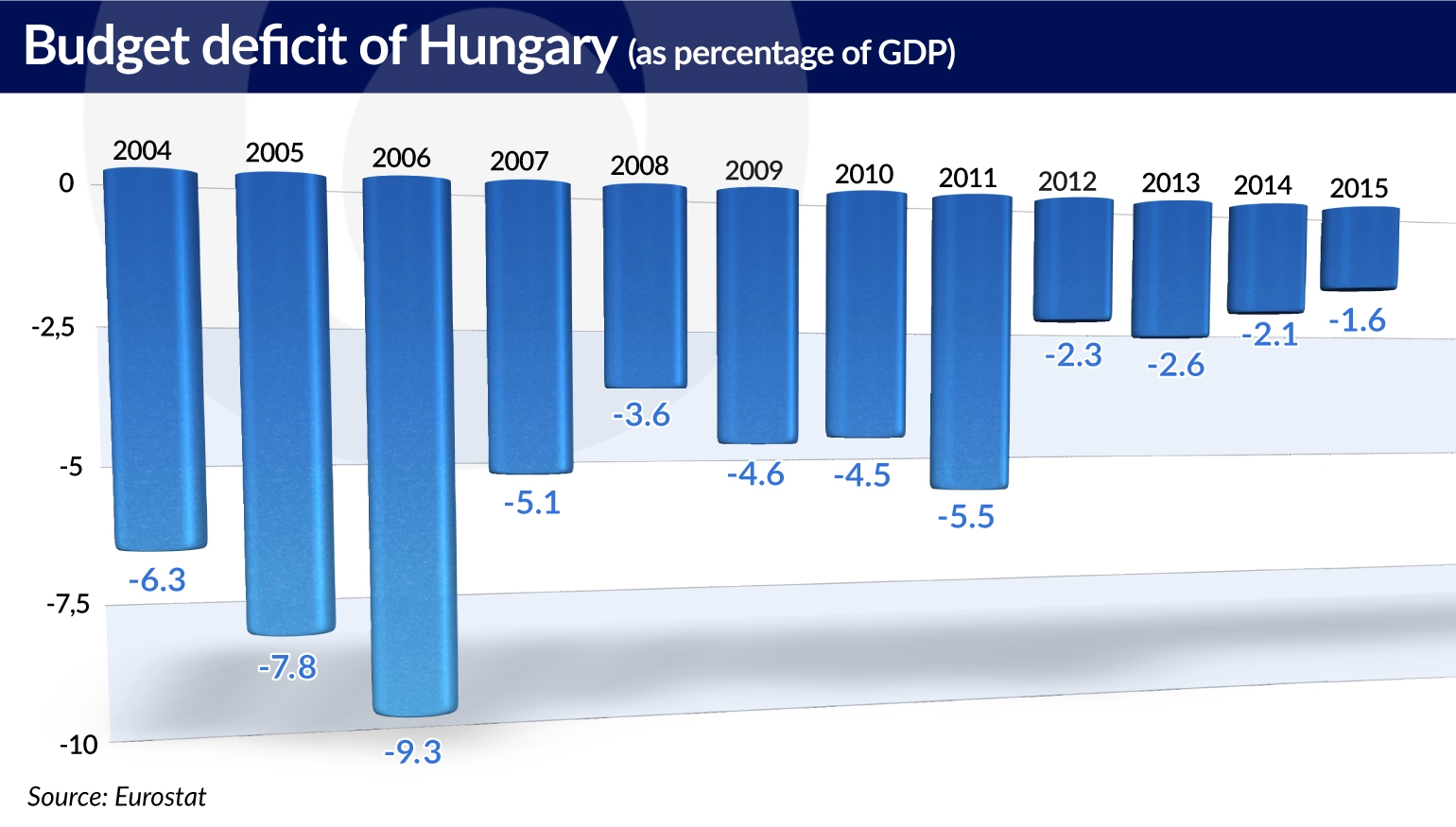