According to early data on economic growth in the Q2’16 in Poland, the economy grew by 3.1 per cent compared with the Q2’15. Investment may be the cause of the biggest concern, but that is not the picture of the economy as a whole.

This is flash data, that is, a quick estimate prepared on the basis of a limited set of data. After accounting for seasonal factors, GDP grew by 0.9 per cent compared with the first quarter of this year. The economy is performing a bit worse than expected even a few months ago. In March, both the NBP projection and the market consensus indicated that the first half of 2016 would bring growth of 3.6 per cent.

This is not a significant difference, but if it portends a permanent deterioration of the growth trend, then it could have serious consequences, for example, for the State budget or the decisions of the Monetary Policy Council (MPC). The government is preparing budget plans for the coming years with the assumption that the potential growth of the economy is approximately 4 per cent. Meanwhile, the MPC is keeping interest rates stable based on the belief that the economy will maintain the rate of growth of previous years (that is, approximately 3.5 per cent).

The recent GDP data, however, can be looked at more optimistically. First of all, given the relatively large error of the first readings of the GDP data, we should not pay so much attention to surprises of a few tenths of a percentage point in year-on-year terms.

The state of the economy is not only GDP, but also the labor market, sentiment among consumers and managers, impulses from the international environment and the financial markets, fiscal data, etc. There is little evidence indicating that there are changes in the trends from previous quarters in the Polish economy. For the time being, the assumption that companies could permanently reduce investment remains in the realm of hypothesis. There is no hard evidence to confirm this.

In addition, consumer spending resulting from the 500+ program will begin in full swing only from the third quarter of 2015. Economic growth should be higher then. This demand effect will be temporary, but it could be enough to give businesses a positive impulse for investment.

But it is worth noting that for the first time, since 2012 when Poland experienced a strong economic slowdown, GDP has been lower than the market consensus twice in a row (if the data published at the end of August confirms the flash estimate, this data will be the most important). This could merely be a coincidence but it may well reflect some unexpected weakness in the economy which has not been noticed by the analysts. It is no accident that serial negative surprises usually occur during periods of economic growth, when there are more vulnerabilities in the economy than can be seen in monthly data.

The main weak point of the economy and the biggest mystery for the future is investment. It fell in the Q1 (in y/y terms) and could repeat this decrease in the second quarter. We do not yet have the data but the consensus estimates, which proved to be overly optimistic when it comes to GDP, a stagnation of investment in the period between April and June. 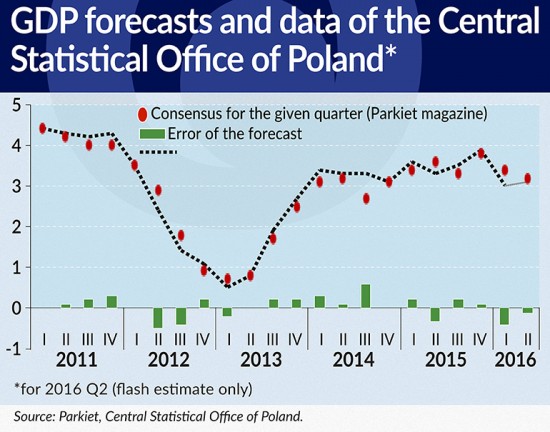 This weakness of investment is partly the effect of temporary factors, such as delays in the spending of European Union funds or changes in the management boards of state-owned enterprises. However, it cannot be ruled out that the private sector has also reduced its appetite for the expansion of manufacturing capacity, among other things, as a result of the downgrading of Poland’s credit rating.

The author works at the Warsaw Institute for Economic Studies foundation (WiseEuropa), where he serves as the head of the Public Policies and Governance programme. 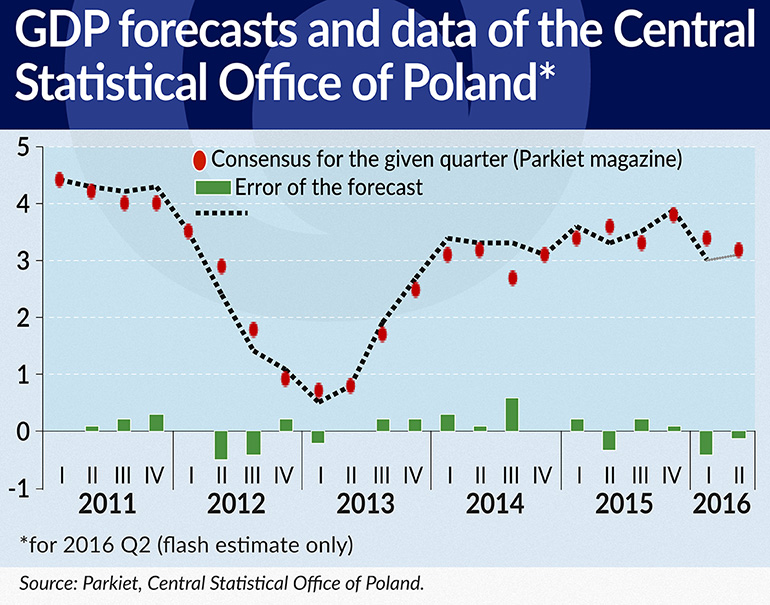