Russia doesn’t like Montenegro’s integration with Euro Atlantic structures so as a main economic partner so far, threatens Podgorica with economic sanctions.

However, Montenegro has managed to avoid a deteriorating economic situation thanks to interest in its economy from the EU, China and Arabic countries. On June 2017, Montenegro became the 28th member of NATO, and the integration process of this country with the EU is very advanced as 28 out of 35 negotiating chapters have been opened.

Russian beachhead on the Adriatic Sea

Moscow’s economic influence in Montenegro has a specific character. In other countries of the region (Serbia, Bosnia and Herzegovina, Bulgaria) the Kremlin extends its influence via the investments of large corporations in the energy sector and by strengthening dependence on supplies of Russian energy resources. Montenegro, on the other hand, does not rely on Russian energy resources. It is not integrated with the Russian pipeline transmission network and the energy sector is controlled by Greek and national companies.

This does not change the fact, however, that Russia is still the biggest foreign investor in Montenegro. According to Central Bank of Russia data, the accumulated Russian investments in 2016 exceeded the value of USD1.3bn, which means that over 28 per cent of all foreign investment is a Russian capital. The real scale of Russian engagement may be even greater, since part of the Russian investments are carried out by companies registered in Montenegro or other countries. Due to Montenegro’s attractive location on the Adriatic Sea, the Russian influence mainly focuses on two interconnected sectors – tourism and the real estate market – and to a lesser extent on the construction sector.

Russians have also contributed to the high receipts in tourism – a key sector for Montenegro, generating one fifth of the country’s GDP. Taking advantage of the visa-free movement, they have become the most numerous nation, after Serbians, to visit Montenegro and account for approx. 20 per cent of all tourists in the country.

According to the Montenegrin statistical office MONSTAT, Russians spend more time in Montenegro than tourists from other countries (approx. 30 per cent of all visits) and they also spend more money there.

Intensive investment relations do not translate into mutual trading relations, as Montenegro does not use Russian energy resources – the main export product offered by Moscow.

What is more, due to the mutual economic sanctions after the outbreak of the crisis in Ukraine in 2014, trade between the countries has become even smaller. In 2011, the share of exports to Russia constituted 1 per cent of total Montenegro exports, and in 2016 this indicator fell to 0.7 per cent. In 2011 imports, the share of trade with Russia was 1 per cent and 0.2 per cent in 2016.

Crisis in relations with Russia

On the eve of proclaiming independence in 2006, the Montenegrin elites saw the inflow of Russian capital as an opportunity for the quick economic development of their country. The high level of corruption and the lack of strong institutions and justice scared off Western investors, but for Russian partners it was somewhat an asset that made some cases easier to deal with, e.g. non-transparent money transfers.

The expectations of Montenegrins were mostly met, and Russian investments translated into a boom in tourism and the construction sector, and a significant increase in real estate prices, which resulted in dynamic growth of the local economy.

The model of development mostly based on Russian investment has already been exhausted in Montenegro. First of all, most of the resources were sold or privatized. Secondly, Russian investments in sectors other than real estate turned out to be a failure. The investment made by Oleg Deripaska, a leading businessman connected with the Kremlin, ended with a scandal and an international legal dispute. In 2005 Deripaska bought 58.7 per cent of shares in the Aluminium Plant Podgorica (APP) via his Cyprian company Central European Aluminium Company (CEAC). In 2009, APP – the most important Montenegrin plant generating a significant part of GDP and 40 per cent of exports – was nationalized in order to avoid bankruptcy.

Thirdly, because of the economic crisis in Russia and the fall in the value of the RUB, the investment possibilities for the Russian middle class, which bought real estate in Montenegro, have been seriously limited.

At the current state of development, cooperation with Russia is not attractive for Montenegro anymore. Moscow, unlike the West, does not grant financial support, e.g. in the form of loans for infrastructure development. Also, it does not present an attractive model of modernizing the economy and increasing its competitiveness. Montenegro, although still developing relatively quickly (3.2 per cent GDP growth in 2015, 2.5 per cent in 2016), needs radical reforms. It has a huge problem with its high budget deficit (so far financed by investments), national debt (70 per cent of GDP in 2016) and high unemployment rate (17.5 per cent in 2016).

Montenegro, similarly to other countries of the region, tried to maintain good relations with Russia, but after the outbreak of the crisis in Ukraine in 2014 and as part of the integration process with the EU, the country joined the sanctions imposed on Russia by the EU member states. This move, together with efforts to join NATO, caused a strong reaction from Moscow, which in turn imposed sanctions on Podgorica and called its (Russian) citizens to limit investments and tourist visits in Montenegro. Russian investments had indeed significantly dropped at that time, but mostly for the reasons listed above, including, above all, a significant decrease in the value of the RUB. No such change was noted in tourism.

Moscow hoped that the Montenegrin establishment, favorable to Russian capital, would allow the strengthening of Russian economic influence and in turn, pursue foreign policy in accordance with Russian expectations. Russia continues its policy against Montenegro. Another escalation of tension took place in October 2016, when Podgorica accused Moscow of trying to organize a coup, which was supposed to lead to the seizure of power by political forces favorable to Moscow.

The consequence of this event was the stepping up of the anti-Montenegrin campaign in the Russian media directed mainly at tourists and businessmen, and taking administrative steps that would hinder economic relations. For example, in April 2017, the Russian Rospotrebnadzor restricted exports to Russia for the biggest Montenegrin wine producer 13. Jul Plantaze because of allegedly bad quality.

However, the Russians have limited possibilities to use strictly economic steps against Montenegro and transform their economic presence into political influence. The Montenegrin investments were mainly undertaken by the Russian middle class – not necessarily favorable to the Kremlin and more difficult to control. The fall in Russian demand also caused a decline in real estate prices in Montenegro, so withdrawal from investment in this country would be extremely unfavorable to the already crisis-ridden Russian middle class.

Similarly, the tourist flow from Russia is mostly generated by apartment owners, which soothes the decline in this sector (however, the first five months of 2017 have actually brought falls in the number of tourists from Russia by about one third). Only at the end of the tourist season will we find out if this trend will continue.

The decrease in investment from Russia did not cause an outflow of investment from Montenegro. Quite the contrary – in the years 2015-2016, when the Russian investment significantly decreased, the biggest inflow of foreign investment after the world crisis was noted. Also in the tourist sector increases are noted due to the falling interest in holidays in North Africa and Turkey. Montenegro is becoming increasingly attractive for western tourists, which will compensate for the lower number of Russians visiting this country. This is confirmed by the data on tourist traffic in the first five months of this year.

Moreover, China has started to focus on Montenegro as part of its concept of the Silk Road. In 2014, the Chinese Exim Bank granted Montenegro a loan of over EUR800m to build the Podgorica-Kolasin highway. The project of Montenegrin fleet modernization (approx. cost EUR100m) is also being implemented in cooperation with China. Arabic capital is also interested in investing in Montenegro. The country should focus on the modernization of its economy to make it more competitive and to reduce the economy’s dependence on the tourist sector.

Marta Szpala is a Senior Fellow at the Centre for Eastern Studies and cooperates with the Vistula University in Warsaw. 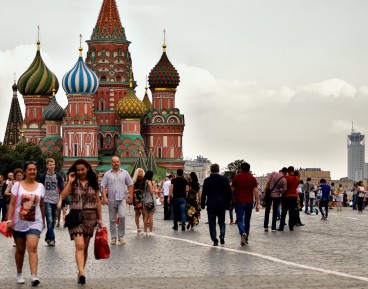