„One Belt One Road” needs one strategy

The Silk Road Economic Belt is mentioned at every conference about China today. Poland should make sure it is on the route.

On November 2015, Polish President Andrzej Duda paid a visit to China. As many as 80 companies’ representatives accompanied him. At the end of the Polish-Chinese economic forum eight agreements were signed including contracts for the export of dairy products, scientific and technical cooperation between Chinese and Polish universities and R&D centers, as well as contracts for the export of food products via China’s biggest internet platform. A memorandum on tourist cooperation was another document signed. The Industrial and Commercial Bank of China (ICBC) concluded an agreement with Poland’s state-owned bank BGK.

The Chinese bank is also going to strengthen cooperation with the Polish Investment Agency (PAIIZ) launched after the bank has entered Poland in 2012. According to the agreement between PAIIZ and ICBC, the latter is going to offer financing to Chinese investors for infrastructural, mining, industrial, service and renewable energy projects. PAIIZ, on the other hand, will help the bank start relations with Polish businesses. The two entities will support trade relations. Today, China’s export to Poland is 11 times higher than the value of Polish goods imported to this country. On November 27th ICBC and six other Chinese banks signed an agreement in Warsaw to make a CNY10bn (USD1.57bn) loan to Polish energy company Tauron Group.

During Andrzej Duda’s visit the 4th 16+1 summit was held in Suzhou. The 16+1 group consists of China and the following CSE countries: Estonia, Latvia, Lithuania, Poland, the Czech Republic, Slovakia, Hungary, Romania, Bulgaria, Slovenia, Croatia, Serbia, Bosnia and Herzegovina, Montenegro, Albania and Macedonia. The majority of countries were represented by their Prime Ministers, Croatia was represented by its head of Parliament, while Romania and Slovakia were represented by their deputy Prime Ministers. Chinese Prime Minister Li Keqiang said that Chinese companies want to invest USD5bn in Central and Eastern Europe. He promised China would provide proper conditions to import more goods from CSE, especially food products. He added that more way of financing would be offered.

“We would like to make use of a special credit line. We would also like to discuss the proposal to create a special fund by the Asian Infrastructure Investment Bank (AIIB),” said Li Keqiang. President Andrzej Duda, interviewed by China Central Television, pointed out that Poland is the only CSE country which is going to be a member of the AIIB. “We are the biggest CSE country, we understand our potential. We also understand the great potential of the One Belt, One Road idea. We have proved our commitment by joining AIIB. We want to be active, to influence its policy accordingly to our stake. We would also like to see a Pole in the bank’s management, among the directors deciding on the basket of non-euro countries. There is an easy and fair rule: if you want to profit, you must commit,” said Andrzej Duda.

“For the first time ever, the Chinese have decided to look for a partner in Central and South East Europe. They stressed that Poland stands out in the region. A visit of Chinese President Xi Jinping to Poland is very probable next year. We may not spoil the climate, we need to have our ideas, projects, proposals,” says Sławomir Majman, PAIIZ CEO.

The One Belt One Road and the AIIB are the new hope for Polish-Chinese economic relations. Poland has been waiting for a big Chinese investment for many years. The Chinese model consists engagement in infrastructural projects, but Covec’s story will long be remembered in Poland (Covec, China Overseas Engineering Group, won a contract to build a 50km of highway between Warsaw and the German border in 2009. The company dumped the price and thus quickly run into financial difficulties, so Polish government cancelled the contract).  Chinese companies rarely invest in greenfield projects, which are Poland’s competitive edge. Chinese prefer to acquire existing companies, the way LiuGong did with Huta Stalowa Wola steelworks. 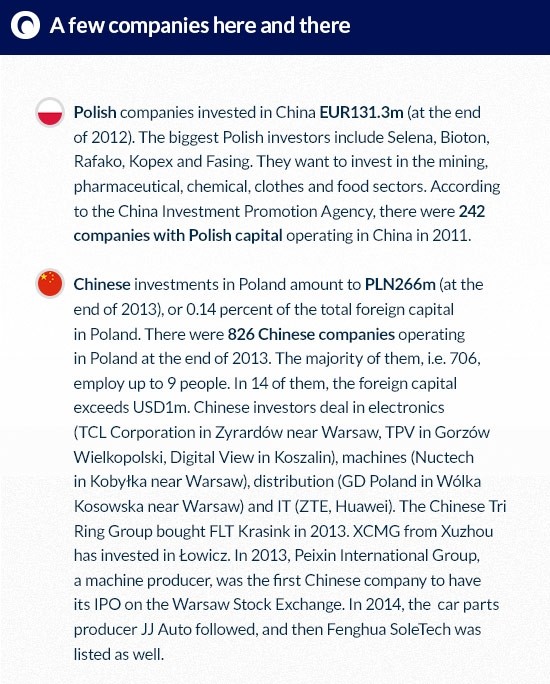 The One Belt One Road notion is being repeatedly discussed and analyzed at every conference in China and about China. The problem is, as it happens in China, it is not well defined. “Even its name is vague. In fact, there are two Silk Roads: the Silk Road Economic Belt and the 21st century Maritime Silk Road,” says Bogdan Góralczyk, the professor at the European Centre of the Warsaw University. “No one knows where the route starts and where it ends. At the end of March, a document was published which was supposed to give details. It did not. There is no map showing the route. The idea is so general that it can be interpreted in many ways. It looks, however, that Poland is on the route, and has been there from the very beginning,” adds Justyna Szczudlik-Tatar, analyst at the Polish Institute of International Affairs (PISM).

The Silk Road Economic Belt is supposed to bring the renaissance of the nation as the Chinese government believe. The no. 1 world’s economy power wants to expand abroad. The route goes West and ends in Berlin or Rotterdam.

According to HSBC the New Silk Road joins 64 countries generating 29 per cent of global GDP and inhabited by 63 per cent of the world population. Trade between China and these countries may exceed USD2.5 trillion in the future. In China, the route will go via 18 provinces, including the less developed ones, like Xinjiang, Gansu or Shaanxi. The total investments which have been started or are planned may amount to CNY1.5 trillion (USD230bn). There are over 900 projects planned, including 15 new ports. President Xi Jinping believes that One Belt, One Road will boost Chinese GDP growth by 0.25 percentage points in 2015. HSBC economists estimate that this year China’s GDP will grow by 7.1 per cent, and next year by 7.2 per cent.

“Although Poland’s cooperation with China continues to grow, it still remains outside our top trade partners. The New Silk Road project is a chance to balance our trade with this promising market. Polish companies are slowly discovering China’s potential. The growing middle class, the dynamic consumption growth, the migration of people from rural areas to the cities and the development of infrastructure are just a few examples creating opportunities for Polish companies from the chemical industry, pharmaceuticals, cosmetics, IT, building, food, energy, industrial machinery, transport equipment and environmental sectors. Thanks to the new trade road running, among others, via Poland, we have an extraordinary opportunity to become the regional center of trade exchange between China and Central and South East Europe. The New Silk Road is a two-way route and I believe that Polish companies will be able to seize the opportunity,” says Michał H. Mrożek, HSBC Bank Polska CEO.

The financial arm for the Silk Road Economic Belt is the Asian Infrastructure Investment Bank founded earlier this year. The AIIB’s initial capital will amount to USD100bn, and its biggest shareholders include China (30 per cent), India (7.5 per cent) and Russia (5.9 per cent). The amount of the payment will determine the number of votes.

“The AIIB and the Silk Road Economic Belt are expected by the Chinese Academy of Social Sciences to become the ironworks for infrastructure investments. This has been the most important thing since the end of the Cold War. I’m worried that we care so little about it,” says Bogdan Góralczyk.

Jacek Dominik, the former deputy minister of finance, disagrees. “Poland’s position at the AIIB is relatively strong: we are in the board of directors, our representative will be either a director or a deputy director. This gives us access to documents presented in the bank. We should not expect contracts to be negotiated for Polish companies. The AIIB is an entity for companies who want to invest in infrastructural projects in Asia. Today, the basic problem is how to find a reliable partner and financing for such projects. The bank gives funds, checks partners and evaluates projects. This is a new instrument for Polish companies planning expansion in the East,” believes Jacek Dominik.

Although it seems that Poland is in the group of countries excluded from investments supported by AIIB, Jacek Dominik recalls that it is mentioned in AIIB documents that “investments may be conducted in Asia and other regions”. This can be interpreted as outside Asia, i.e. in Poland. The last thing left to do is to ratify the document.

“It should be done as soon as possible. The bank starts operations on January 1st. Strategic decisions will be made. Poland has a status of an observer. We have very comfortable chairs waiting for us in this room. I hope the discussion in the parliament on whether we  should spend several million dollars won’t drag on for years,” says Jacek Dominik.

According to Bogdan Góralczyk, Poland needs an institute for Far Eastern Studies. “Whatever we think, it will be much more important what the role China assigns to Poland. The Ministry of Finance has done a great job, but it is Polish companies which must take part in procurements starting in 2016. This is the main challenge. We need actors who will fight for the contracts. There are 57 countries competing,” reminds Radosław Pyffel, the CEO of the Centre for Poland-Asia Studies.

There has already been some news on what China plans for Poland. Wang Dan, the deputy CEO of the Silk Road Fund, said in Brussels in October that the fund wants to finance the construction of the railway station in Łódź, enabling a transport of goods deeper into the EU. According to Slawomir Majman, the CEO of the Polish Investment Agency, China wants to invest USD40bn in this project. There is a regular train connection between Łódź and Chengdu. A piece of land has been recently included into the Łódź Special Economic Zone where the railway station may be built. Sławomir Majman reveals that there is also a Chinese investor ready to develop Małaszewice, a train station in eastern Poland. 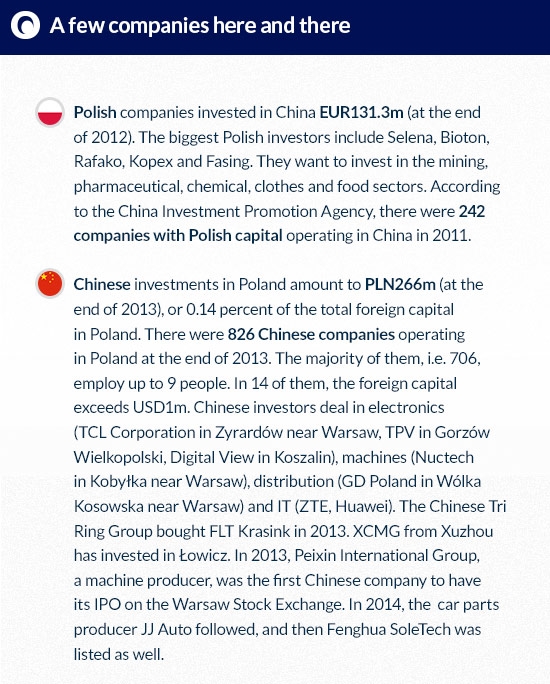