The Polish government is not the most lavish one as far as attracting FDI is concerned. According to the latest report by the Polish Foreign Investment Agency, Poland has less incentives than Bulgaria and the Czech Republic but more than Slovakia or Romania.

The European Commission makes sure that any of its member states offer a higher state aid than others. The levels of state aid are thoroughly evaluated and depend on the GDP in all EU regions. Bigger projects supported by state or local governments must have the EC approval.

As far as the maximum state aid level is concerned, Poland is in the middle of the ranking as shown in the latest report ‘Investment incentives in the chosen Central and Eastern European Countries’ prepared by PAIIZ. 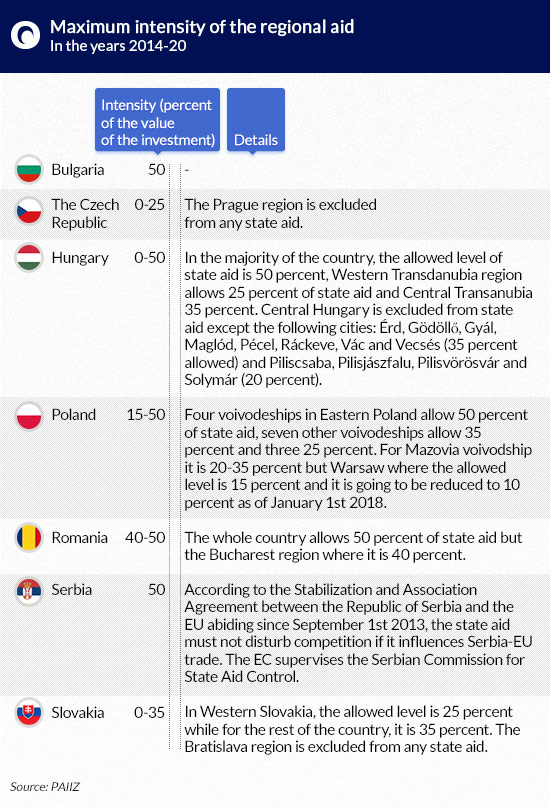 Bulgaria, Romania and the to-be EU member Serbia allow up to 50 percent of state aid being offered to investors in the whole country. Czech Republic, Slovakia and Hungary have regions where the state aid is not allowed at all. These are the capital regions, i.e. the Prague region, the Bratislava region and Central Hungary (with several exceptions). In this respect, Poland ranks in the middle among CEE countries: there are regions in Eastern Poland where the highest level of possible state aid up to 50 percent is still permitted. Even in Warsaw some support is possible 15 percent now to be lowered down to 10 percent as of 1st January 2018. This is Polish advantage when competing with other CEE countries. With improved infrastructure, stable law and politics Poland is able to offer the same support as less developed Romania, Bulgaria or Serbia, countries still less known and ‘conquered’ by investors. ‘This is our advantage’ says Sławomir Majman, CEO of PAIIZ.

However, the recent Jaguar case proves that the available state aid is not everything. The automotive company owned by Tata Motors has chosen Slovakia over Poland. The level of state aid amounts up to 25 percent in both locations. According to people close to negotiations a higher cash grant plus the possibility to quickly start construction works made the difference. This is why it is necessary to analyze the types of incentives offered by CEE countries.

In its report PAIIZ enumerates seven instruments: an investment grant, an employment grant, a training grant, a CIT exemption, a property tax exemption and a possibility to buy property at a reduced price. Plus there are other instruments specific to certain countries. Poland has got five out of the above mentioned eight instruments, the same number as Hungary and Bulgaria, fewer than the Czech Republic and more than Slovakia and Romania.

For many investors such as Tata Motors cash grants are important. In Poland cash grants are offered by the state for projects in the automotive, electronics, aviation, biotechnological, food-processing, business services and R&D sectors, as well as for large projects in any other sector. The subsidies vary depending on the value of the investment or the number of new jobs created. 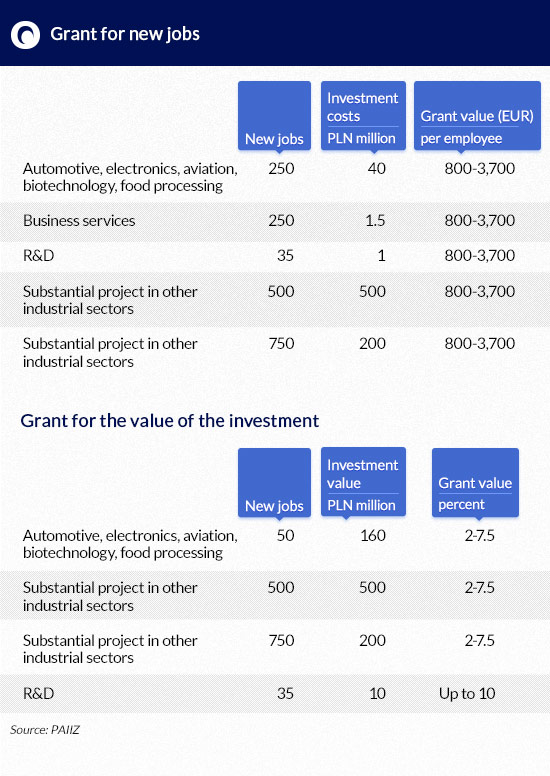 In the Czech Republic investment grants are available for strategic projects and employment grants for projects in production, business support services centers and technological centers. If the project is located in a special industrial zone, the employment grant is higher and amounts up to CZK 300,000 per employee. The newly founded industrial zones are located in Ostrava-Mosnov, 50 km from the Polish border, Holesov (95 km from the border) and Most-Joseph, 140 km from the border. Further zones will be created based on the pilot program. 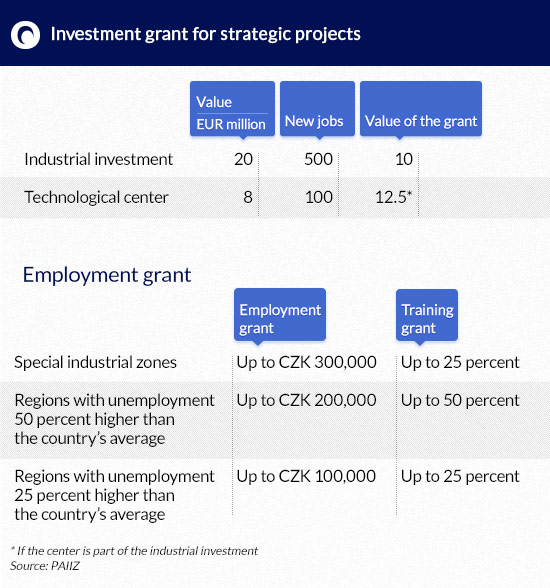 In Slovakia investment grants and employment grants are offered to industrial projects, technological centers (R&D, production and technology upgrade), strategic services centers (entities with high value added employing experts, e.g. software development centers, client support centers, headquarters of international companies) and tourist services centers (offering at least three types of services such as: accommodation, spa, skiing, swimming, etc.). In regions where the unemployment is higher than the country’s last year’s average there is a possibility of investment grants up to 10-20 percent of the value of the project. The same applies to employment grants and its amount depends on the maximum regional aid intensity. 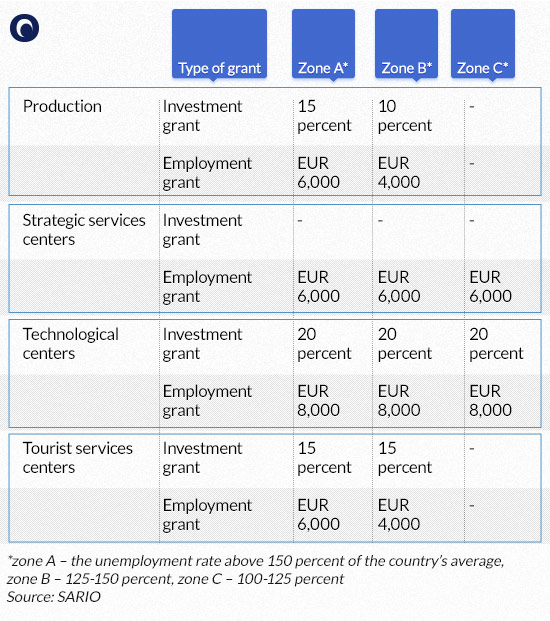 The investment support law was changed at the beginning of 2014. It introduced new quota of the new jobs created – minimum 40. For reinvestment projects the required number of new jobs is 10 percent of the average employment for the last 12 months and cannot be lower than 40. However, these limits do not apply to production or touristic projects worth over EUR 100m and creating 400 new jobs and to technological centers if the investment amounts to at least EUR 8m and creates 100 new jobs. 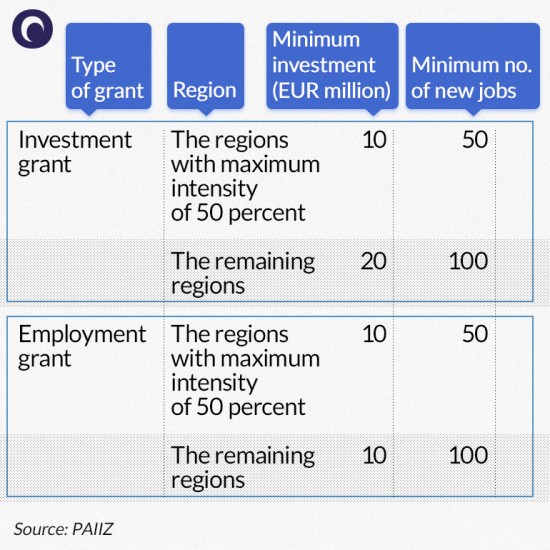 In Romania, there is a EUR 600m program for the years 2014-20 offering investment or employment grants to all kinds of projects. Investment grants are for projects worth at least RON 44m (EUR 10m). In order to receive the employment grant at least 10 new jobs must be created.

In Bulgaria, most grants are offered to the so called class A and class B projects. The training grant may be up to 25 percent of the training costs. Investors may be reimbursed for employment costs as well. There is also a possibility to obtain a grant for building infrastructure on the lot. Cash grants are available for priority investment projects, e.i. approved by the government and 3 times more expensive that the requirements for A class projects plus creating jobs in less developed regions or implementing modern technologies. Their value is up to 50 percent of R&D projects and 10 percent for production projects. Priority projects are supported additionally, while buying the property. Grounds owned by the state or municipal authorities may be sold without tenders and at a reduced price. All A and B class investors are reimbursed for the costs of one-year employment and social insurance costs if they employ through the labor office. 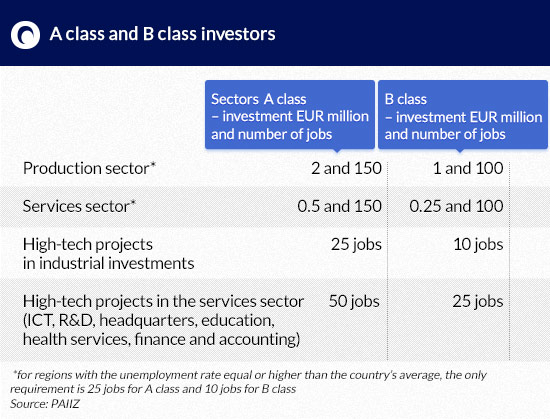 In Serbia, a new investment package has been recently prepared. Big companies may be granted up  to 50 percent of support, medium-sized ones – 60 percent while small enterprises – up to 70 percent. With projects up to EUR 50m, a 50 percent state aid is possible, for projects worth EUR 50-100m – up to 25 percent, while for projects of above EUR 100m – up to 17 percent. The country has been divided into five categories (I-IV plus the most destroyed regions) and the support depends on these categories. 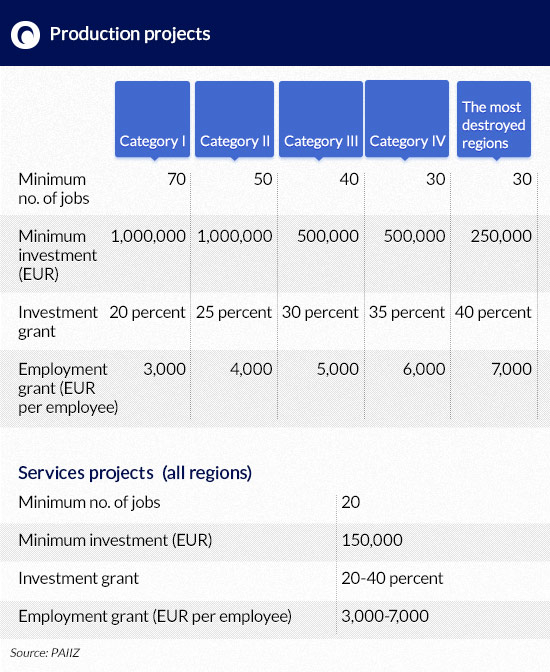 There are also employment and training grants available, each of them worth up to EUR 170-1,700 per employee.

The analysis proves that investment grants may be up to 40 percent of the value of the project in some CEE countries. In most of them investment grants are combined with employment grants and training grants. Such systems substantially increase the cash offer.

According to PAIIZ report several countries have implemented new investment incentives this year.

Big changes have been implemented in the Czech Republic. In May, the employment grant was increased. New requirements for jobs created have been introduced together with the support for call centers. Property tax exemption is a new solution offered in special economic zones.

In Slovakia the new map of minimum investment level has been implemented. For production and tourist projects, as well as technology centers, there are no limits to the maximum aid intensity provided that a certain value of the project is reached.

Hungary offers not only an investment but also employment grants, an 80 percent CIT relief, as well as support for training.

In Romania new high-budget investment grant programs have started this year. It is enough to create just 10 new jobs or invest EUR 10m to apply for a state aid.

In Bulgaria the most important projects receive A or B class certificates ensuring a fast track and possibility to buy property at a reduced price. Priority investments in R&D and production are supported by financial grants. CIT exemption has been introduced in regions with unemployment of 25 percent above the country’s average. Employment grants have been implemented as well.

The Republic of Serbia, next to very low labor costs, offers the following incentives: investment and employment grants, as well as CIT and VAT exemptions.

In Poland nothing has changed this year. There is a program for support of projects crucial for the economy with a budget of PLN 672.4m for the years 2011-2020. Unfortunately the budget has been already spent. Ilona Antoniszyn-Klik, the deputy minister of economy, said in June that there were plans to increase the budget by PLN 330m. No decision has been yet made.

– The fact that neighboring countries diversify their state aid is a threat to Poland. It is interesting how many new packages, or new reasons to support investors, are being created. There is a substantial growth in flexibility in the CEE region. We have to operate mostly with our personal appeal, i.e. economy, labor force, growth, etc., while other CEE countries keep improving and liberalizing their systems – Sławomir Majman concludes.