Polish law is the most unstable in the European Union 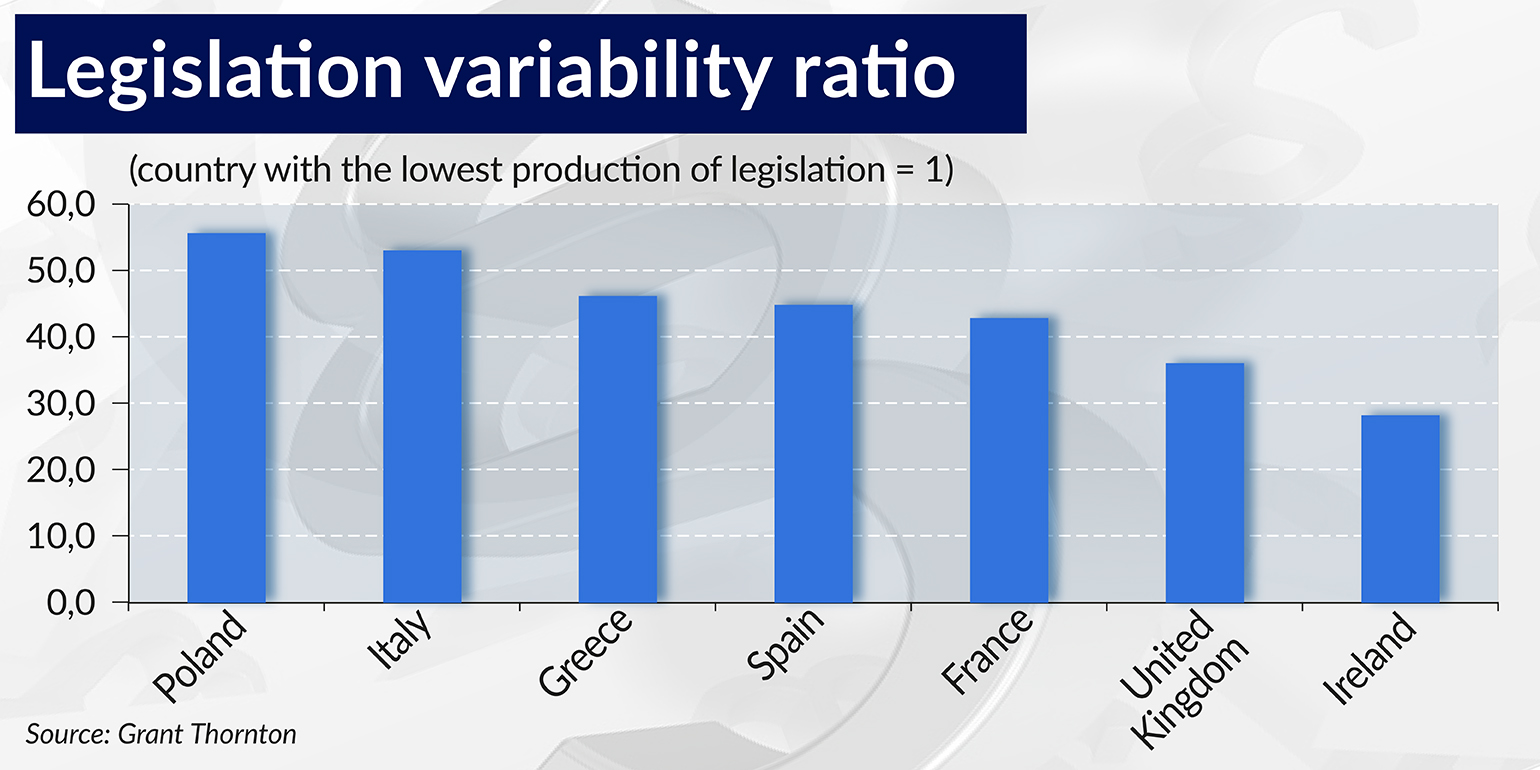 In Poland, the regulatory activity of the state has got out of control. In 2014, twenty-five thousand pages of new regulations entered into force, but the state did not stop at that. In 2015 another 30,000 pages were introduced.

This legislative debauchery, also referred to as a tempest, a hydra, and perhaps most colorfully and to the point – legislative diarrhea – can be felt without special receptors, but some numbers could prove useful in a convincing description of this “plague”. We can thank the consulting and auditing firm Grant Thornton for that. Its cyclical survey covers legal acts of the highest rank, i.e. acts and regulations.

How much is too much?

In the past year, 2,372 sources of law of this kind entered into force, giving a total volume of as many as 29,800 pages of typescript. The mechanical reading of this collection would take the average Pole half of each working day, and to be exact, 3 hours and 59 minutes. In other words, in order to read the new laws and regulations, you would need to spend up to 983 hours or 41 full days. And what about reading with comprehension? How much more time would have to be squandered in order to understand “what it all means”?

Legal acts in Poland are usually written in such indigestible, convoluted and poor language that in a decent school their authors should not be able to pass the final secondary school exam. This will not be changed by any excuses provided by the “lawyers’ guild” that this is supposedly what legal language looks like. Such explanations disqualify themselves. There is nothing that cannot be stated in plain and clear Polish, as long as it isn’t gibberish.

In a good attempt to visualize the problem, experts at Grant Thornton illustrated it using a couple of evocative comparisons. If every entrepreneur wanted to print out the whole legislation created in Poland in 2015, we would need to cut down almost 6,000 hectares of forest, with 11.5 million trees, to produce the required paper. The smallest rural commune in Poland in terms of acreage is Jejkowice near Rybnik. Its surface area is 759 hectares. This means it would be necessary to wipe out seven and a half times the area of Jejkowice in order to feed the bureaucracy for one year.

The hypothetical defenders of the status quo might try to retort that many of the most important legal acts have little or nothing to do with the day-to-day lives of people, including entrepreneurs, which – as they say – should be watched over and kept on a short leash, because otherwise they would end up controlling the remaining part of reality that still hasn’t been regulated.

Indeed, in 2015 “only” 9,847 pages of new laws directly regulating the activities of companies entered into force. These acts constituted (by volume) one-third of the total legislative explosion. Grant Thornton, however, does not include acts of a lower order, including legal acts issued by ministers. An additional component of the enormous amount of legal texts constituting obligatory reading for businesses are the tax interpretations. The Ministry of Finance alone issues approx. 30,000 of these annually. Add to this the rulings of administrative and commercial courts, which are also an important source of law, according to a less formal definition of those sources.

This leads us to the conclusion of a self-reinforcing mechanism, in which the quality, clarity and finesse of the introduced regulations have lost to the raw force symbolized by volume. This brings to mind an old joke from the Polish People’s Republic about workers circling the construction site with empty wheelbarrows. Finally, when they were asked what the hell they were doing, they gave a very concise answer: “Boss, it’s such a grind here that there is no time for loading.”

The year 2015 was marked as the year of the most prolific production of law, not only in the period of the transformation, but also in the entire post-partition history of Poland counted from 1918, i.e. for almost a century. Since Poland joined the European Union, 235,600 pages of new laws have been introduced in Poland. That would equal some 240 five-hundred page volumes (printed double-sided). At this point we should categorically refute the very common explanation, according to which the EU and its clerical authorities in Brussels are almost exclusively responsible for the acute legislative diarrhoea in Poland.

Does Poland have to have so much legislation?

Firstly, there is no compulsion to implement all the EU regulations word for word, and especially to extend the scope of what was adopted in Brussels.

Secondly, in the years 2012-2014 in the Czech Republic an average of 450 laws and regulations entered into force per year, while in Poland this rate was four times higher (an annual average of 1,749 such legal acts). In light of this comparison, the thesis about Brussels as the origin of the legislative diarrhea which is exhausting both Poles and Poland could only be true if someone managed to prove a dependency between the number of legal acts and the surface area and population of a given state.

Thirdly, and most importantly, or at least as importantly, we are a full member of the European Union and we aspire to be among its leaders, even if only in the political realm. In this role – real or imagined – we have a sacred duty to fight the regulatory excess within the Union, and not hide our heads in the sand, squeeze as much money as possible out of Brussels and indulge in ritual complaining.

The thesis of our own culpability in allowing the legislative explosion becomes clearer in the context of the “legal environment stability” ratio presented by Grant Thornton. In this respect, Poland is the undisputed leader in the EU – the variability of law in Poland in the years 2012-14 was almost 56 times higher than in Sweden, where the law is the least variable and which sets the benchmark for this ratio.

The instability of law was assessed by the total volume of implemented legal acts of the highest rank, and the measure was the number of characters with spaces, wherein all of the results have been cleared of the impact of differences in the length of words between the different languages. In Poland the laws and regulations had a total of 66.07 million characters, while in Sweden only 1.18 million characters.

The described ratio is more than just synthetic and serves illustrative purposes only, and therefore the only conclusion that could be drawn from it is that the scale of legislative excess in Poland is really bad and something needs to be done about it as soon as possible. 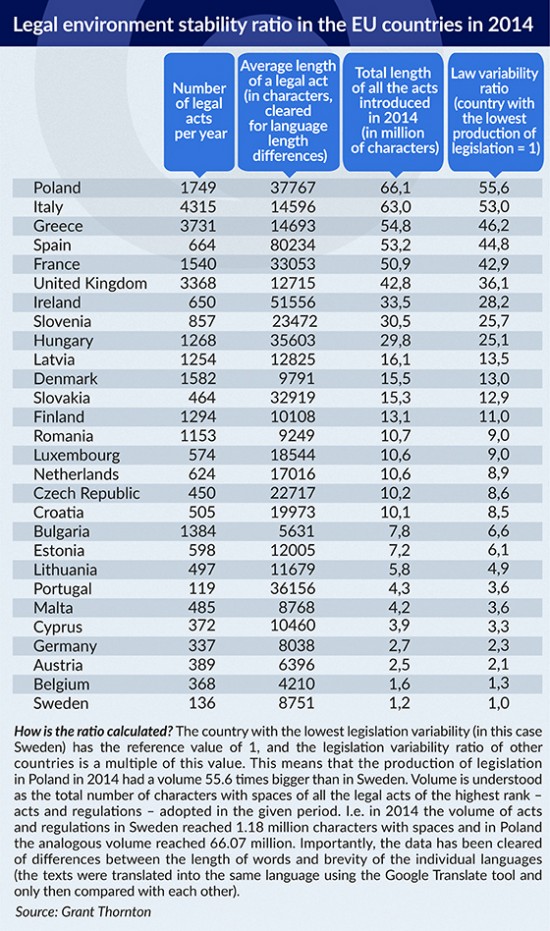 The single bright spot in the legislative history of recent years is the consolidation of legislation. In the conditions of a legislative storm, it is a great facilitation allowing for efficient navigation through the umpteenth amendment to a previous amendment to a given act. Grant Thornton has calculated that consolidated acts constitute between 2 and 5 per cent in the ocean of new legislation implemented every year in Poland, which means that this commendable practice is not a major cause of the increasing legislative flood. The adoption and publication of consolidated texts would not be so necessary if the law in Poland was a stable construction made of stone, preferably of the most precious marbles, and not a house of cards.

If, therefore, we were to identify the causes of the legislative ADHD in Poland, the major culprit would be the low quality of the passed law, which is the direct responsibility of all the successive governments and parliamentary majorities. Bad or mediocre law requires changes, but very often these are not changes for the better, because their authors are satisfied with successive patches added to the “robes”.

We should be repeating with relentless tenacity that Polish law requires a systematic, focused and professional review. The end result should be (after an appropriately long time spent on most careful analyses) the removal of acts which are unnecessary, repetitive, contradictory, inconsistent, extremely general, vague, etc. and the adoption of well-thought-out, well written, but most of all reasonably long-lasting acts in their place, which would serve the long-term interests of Polish citizens.

The authors at Grant Thornton claim that we should avoid minor adjustments to statutory provisions, especially in business matters, because they usually bring more harm than good. We should applaud this assessment, because an imperfect law which is well-known and rooted in judicial practice is better than subsequent improvements based on the communist „rationalization” formula, according to which the system as a whole is pretty good, it’s just that a certain portion of the small components are not what they should be.

When it comes to law which affects the sphere of economy, one weak point is the low understanding and awareness of the economic processes and dependencies among the legislators, and – I would also add – among the judges, with the reservation that the administrative judiciary should be (partly) excluded from this harsh assessment. This is an extremely serious problem because it in fact applies to society as a whole. In such a situation it is easy to fall for populist slogans.

The huge excess and disorder in legislation is a result of the curious belief that the only effective cure for problems of any nature is a powerful state and all-encompassing regulations.

The unfairly forgotten professor of the Jagiellonian University Feliks Koneczny (died 1949) wrote in “The State and Law in the Latin Civilization”: “There is a sin against the 7th commandment that Poles are usually unaware of, although it is a very heavy sin. In terms of social consequences, the worst type of theft is the theft of time, as it corrupts the robbed person. It is a specialty of bureaucracy directed towards the citizens, and it is the most rampant wherever bureaucracy has grown the most, i.e. in Poland. The more official positions, the more time is wasted; the more numerous the public servants in any given office, the more elaborate forms are taken by the theft of time”. This constantly valid assessment is inextricably linked with the fundamentally American assertion that “time is money”. This observation was supposedly first made by Benjamin Franklin and it won him so much respect that he is still looking at our world attentively from the hundred-dollar bills.

The legacy of Koneczny was recalled by attorney Grzegorz Maślanko and managing partner Tomasz Wróblewski, from Grant Thornton, during a presentation entitled “The Legal Environment Stability Barometer in the Polish economy”. We could add to that some great practical advice, applicable on any occasion, and therefore also in the field of creation and ordering of the law. Henry John Heinz – the founder of the company producing what is probably the world’s most famous ketchup – used to say that success occurs when common things are done uncommonly well. He also believed that “heartpower is better than horsepower”, which is understood as meaning that more can be achieved with the heart (and mind) than by force alone.