The costs of dissolution of the Schengen Area 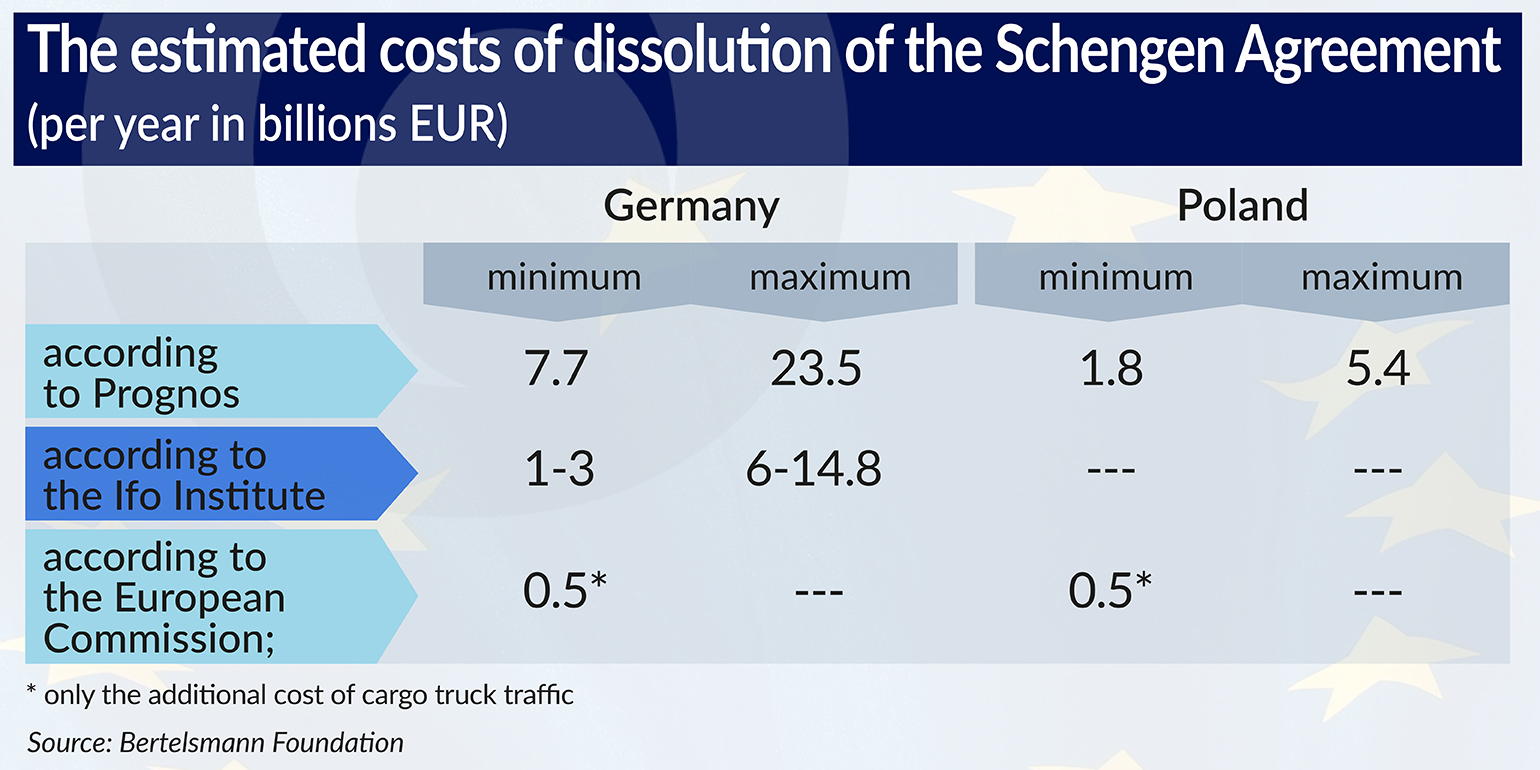 German research institutes provide conflicting data on the costs of the possible dissolution of the Schengen Agreement.

It will soon turn out which of the German fears are stronger: those of losing the benefits associated with the Schengen Area, or the fear of an influx of refugees. Of course, this issue is of a great importance to Poland.

The divergence between the estimates is huge. A report prepared on behalf of the Bertelsmann Foundation estimates that the combined losses for 24 EU countries may have reached EUR0.5 to 1.5 trillion by 2025. In the case of Germany alone, the projected losses would amount to a minimum of EUR77bn. Meanwhile, the Ifo Institute from Munich indicates that in Germany the introduction of border controls would mean an additional cost of only EUR1-3bn per year, which is much less than the burdens associated with mass migration.

The huge differences in the experts’ estimates have significance going beyond the scientific realm, and may have a real impact on the freedom of movement of persons in Europe. The figures from the experts’ analyses are widely discussed in the German media and will certainly be a starting point for political decisions.

Last year marked the 30th anniversary of the signing of the Schengen Agreement and the 20th anniversary of its entry into force. There was no reason to celebrate, however, as the agreement was going through the hardest test in its history. Because of the migration crisis, border controls were introduced by, among others, Germany, Austria, Denmark and Sweden, and after the terrorist attacks, also by France and, most recently, by Belgium. Although the Agreement provides for the temporary reinstatement of border controls (e.g. Poland made use of these provisions during the Euro 2012), this was the first time when the fundamental idea of Schengen, that is, the freedom of movement of persons, was suspended on such a scale.

What’s worse, voices have been heard questioning the rationale for the existence of the agreement in its previous form. According to some, the complete abandonment or introduction of restrictions on the Schengen Area could be a way to guarantee the security of the Member States and their citizens. And yet Schengen is a genuine European success story: after all, it was initially the agreement of only five countries of the EEC (Benelux, Germany and France), which over time extended to 26 Member States of the EU and the EFTA, and which has further candidates willing to join. Today 400 million Europeans take advantage of the freedom of movement within the Schengen Area. Could the uncontrolled influx of over a million refugees into Germany really change that?

Losses not only in trade

Right now a lot depends on the outcome of the debate on the costs of dissolution of the Schengen Area. The think-tank of the French Government, France Stratégie, presented its report on this matter already at the beginning of February. In order to assess the potential losses, the French experts reminded that numerous benefits were associated with the freedom of movement of persons. According to previous analyses, trade between countries belonging to the Schengen Area is 10 to 15 per cent higher than in a situation where one of them is not party to this agreement. The introduction of permanent border controls would lead to losses in foreign trade of a similar scale.

In addition, on the basis of previously unpublished studies, the experts of Stratégie France claim that the dissolution of the Schengen Area would lead to additional costs for exports and imports in the form of a tariff equivalent, estimated at 3 per cent of the value of the trade exchange. In the case of France, that would mean a reduction of GDP by 0.5 percentage points (over EUR10bn), and for the countries of the entire Schengen Area the costs of trade barriers would lead to a loss of up to 0.8 percentage points of GDP.

The experts are also predicting a significant reduction in the tourist attractiveness of the country. Today France is the most popular tourist destination in the world – in 2014 more than 83 million foreigners stayed for more than one night there, and their spending accounted for as much as 2.4 per cent of the French GDP. While tourists from Asia or America may not be deterred en masse by controls on the French borders, that could be a problem for visitors from Europe: in 2014 as many as 122 million people visited France for only one day. And yet – as emphasized by the authors of the report – there would be additional difficulties in the free movement of the labor force and capital investments, which cannot be estimated at the moment.

Similar predictions were presented by the experts of the Prognos institute, who have published their report, carried out on behalf of the German Bertelsmann Foundation, in mid-February. Their methodology was similar to that of the French experts – the economic benefits resulting from the existence of the Schengen Area can be expressed through a tariff equivalent, similarly as the losses associated with its dissolution.

The analysts at Prognos have developed two scenarios: in the first one, transaction costs will increase by 1 per cent of the value of trade due to the introduction of border controls, while in the second scenario, they will increase by 3 per cent. In the less pessimistic model, the German GDP growth would be 0.3 percentage points lower, which would cost Germany EUR77bn in the years 2016-2025. The costs would be considerably higher in the more pessimistic variant – here the annual GDP growth would be 0.8 percentage points lower, giving a total of EUR235bn. According to Prognos, these costs could be even higher if the general condition of the German economy were to worsen. 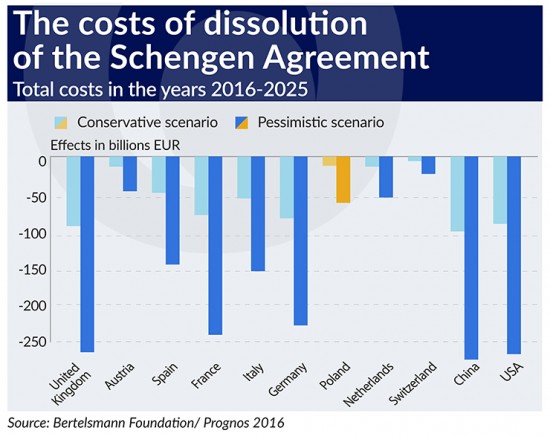 In addition to Germany, the economy of France would suffer similarly high losses – depending on the scenario they would reach between EUR75bn and EUR250bn. In relation to GDP growth, Austria and Spain would lose the most on the liquidation of the Schengen Area (a decrease in the GDP growth rate from 0.5 to 1.5 percentage points). Poland would also suffer from very high costs. In the projected variants the loss for Poland would reach between EUR18bnn and EUR54bn by the end of 2025. This is much more than Slovakia, Slovenia, the Czech Republic and Hungary combined.

In total the nominal losses associated with the collapse of Europe without borders for the 24 EU countries (the calculations did not include Cyprus, Malta, Luxembourg and Croatia) would amount to at least EUR471bn, while in the pessimistic scenario they would exceed EUR1.4 trillion, which – as noted by Prognos experts – is almost equivalent to the current GDP of Italy (EUR1.55 trillion).

Paradoxically, the reintroduction of border controls would also hurt the economies of countries outside the Schengen Area, especially the United Kingdom, China and the USA. While the relative values for China and the USA are not so large (a 0.1 to 0.3 percentage points decrease in the predicted GDP growth rate), they are huge when expressed in absolute figures. In the case of each of these economies, the total losses projected by Prognos would be higher than the costs suffered by Germany or France.

This very pessimistic report was widely reported in the German media. Extreme traffic jams at the borders, billions in costs for Germany and a threat to prosperity – these were the headlines of popular magazines and websites. Perhaps that was the reason why the Ifo Institute in Munich has conducted its own expert analysis, which it recently described as much more „realistic” than the studies of France Stratégie and Prognos.

Researchers from Munich have a similar diagnosis of the commercial benefits for the Schengen countries, but in their view the introduction of border controls will not automatically mean the loss of existing profits. Their method is based on the number of border crossings, which was used to calculate the potential additional costs for companies and economies. In addition, scenarios were also considered in which the entire Schengen Area is not dissolved, but where checks are introduced only at those borders that are on the refugees’ migration paths.

In the worst-case scenario, the Ifo Institute predicts a decrease in German exports by about EUR41bn, and a decrease in imports to Germany by EUR33bn. With losses in the services sector, the total loss would amount to nearly EUR100bn per year, which would mean that in real terms the German GDP would be EUR6 to 15bn lower compared to a situation where there are no border controls.

Other calculations are considerably less pessimistic. According to analysts at the Ifo Institute, in the case of Germany the total tariff equivalent would reach at most the level of 1 per cent of the value of trade in goods and services. In their view, if constant border controls were introduced on the border with Austria, on the Brenner Pass and in the Balkans, the costs of these solutions for Germany would only amount to EUR1bn to EUR3bn. „This is a fraction of the burdens that may arise as a result of further uncontrolled mass migration,” the authors of the report of the Ifo Institute add, and they indicate that only for this year the costs associated with the influx of refugees to Germany are estimated at EUR20bn.

The conclusions of this report, toning down the fears of the economic consequences of the dissolution of the Schengen Area, have not yet reached public opinion in Germany. It is possible, however, that they will be used in the future by the opponents of the current model of European integration. On the other hand, Germans are not only concerned about a further influx of refugees, but are also afraid of any threats to the prosperity and economic development of the country.

„The end of the Schengen Agreement would be immensely costly, especially for our automotive industry, which has a lot of factories in Eastern Europe,” assesses Michael Fuchs, a prominent economic expert of the CDU.

Because German companies use subcontractors from other EU countries on a large scale, the introduction of border checks could be a real threat to the competitiveness of German goods. Beyond the economic and symbolic costs of the liquidation of the Schengen Agreement, other losses, which have hardly been debated so far, are also possible.

Would it still be possible to exchange personal data within the framework of the second generation Schengen Information System (SIS II), and thus to issue a common visa for the countries belonging to the Area? What would be the rationale for the planned grand European projects for the development of the railway infrastructure, such as the Priority Project 17, i.e. a high-speed railway connection between Paris, Munich, Vienna and Bratislava?

In order to avoid these hard-to-estimate losses, at the beginning of March the European Commission presented a road map which is supposed to ensure the survival of the Schengen Agreement: its basic assumption is the protection of the external borders of the EU, and the objective is to restore the full freedom of movement in Europe by the end of the year. If this plan is consistently implemented, the risky debate about the costs of abandoning the Schengen Agreement will soon end. 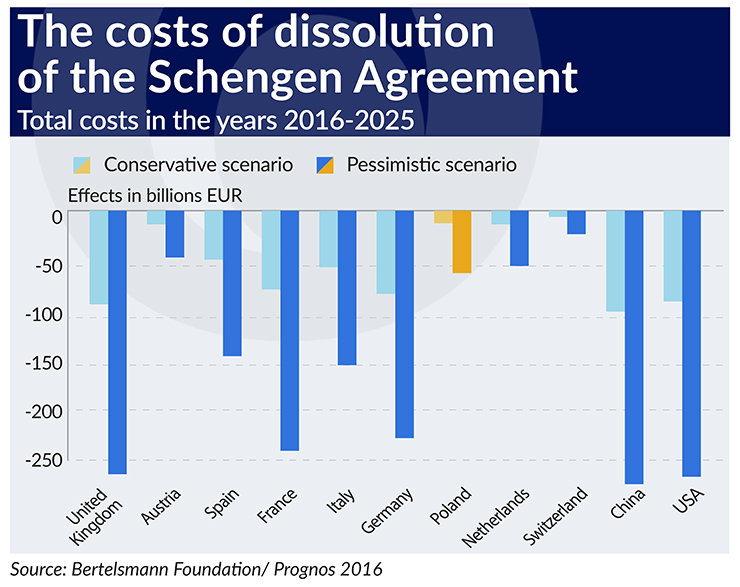