24.09.2020
It's hard to believe that at the beginning of this year Germany was wondering what to do with its budget surplus. The “black zero” policy, which basically boils down to maintaining balanced budgets, was still popular. 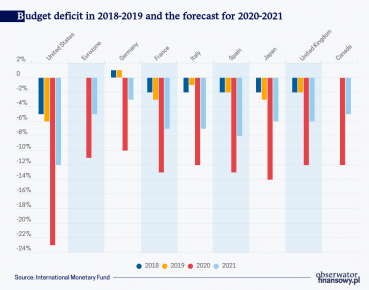 However, the pandemic has changed everything and has allowed a fiscal expansion. The effects are currently difficult to predict. The media are increasingly paying attention to the activity of the central banks. In journalistic jargon we talk about the printing of money, but in reality – as Martin Wolf notes in the Financial Times — the widely discussed process of quantitative easing (QE) comes down to the replacement of money created through bank lending (and more precisely, by commercial banks) with money created by the central bank. In this way the economy is compared to a patient who is administered an intravenous drip by the central bank. Much less is said about the contents of the drip. It can contain all sorts of assets purchased by the central bank. Despite the efforts to diversify the portfolio of assets, the vast majority are securities issued by governments.

The scale of the operations carried out by the central banks was so huge that there was a real possibility that the pool of treasury securities available for purchase could be exhausted. This is, among other things, the effect of the fiscal consolidation, which became fashionable in Europe after the end of the financial crisis. The leader in this regard was Germany, which recently celebrated after its domestic public debt decreased to less than 60 per cent of the GDP. The spectacular rate of the German debt reduction was primarily the result of the strong economic growth.

Other Eurozone countries despite strong austerity measures had to settle for a stabilization of their public debt at a fairly high levels, following big increases at the turn of the first and second decade of this century. It should also be added that sometimes a restrictive fiscal policy turns out to be insufficient to reduce public debt, which is best seen on the example of Italy. If we were to judge fiscal policy on the basis of the so-called primary deficit, then Italy would get the top marks. Unfortunately, Italy’s fiscal situation seems dramatic due to the costs associated with servicing the previously accumulated debt.

Perhaps it is time to raise the relatively unpopular question of the future of the Maastricht criteria, and more specifically — those relating to public debt. Before they were announced no reasonable person thought that Italy would be able to reduce its public debt below 60 per cent in the foreseeable future. And that is exactly what happened. Therefore, the public debt criterion was modified and no longer only refers to the threshold. A provision was added pursuant to which it is sufficient that a country demonstrates a debt reduction trend. The problem is that after nearly thirty years since the announcement of the Maastricht criteria, the public debt in Italy not only hasn’t declined but even started to grow further. This means that either the fiscal debt criterion does not fit reality, or some member states of the Eurozone do not fit the requirements for membership.

In order to understand the scale of the fiscal expansion, it is enough to analyze the history of the issue plans for this year. At the beginning they were modest, with the possible exception of France. The net supply of German bonds was supposed to amount to only EUR7bn. In the case of Italy and Spain, it was only supposed to reach EUR41bn and EUR31bn respectively, and in France it was supposed to reach EUR69bn. The situation started to change dramatically upon the outbreak of the pandemic.

Although it might be surprising to some, it was actually Germany that led the way in the expansion of debt issuance plans. However, contrary to what is often heard, Germans know well when it is necessary to start spending money. Hans Eichel, the former finance minister in the cabinet of Gerhard Schröder, often says that saving money at the expense of necessary investment or spending is equivalent to burdening the future generations with an increase in debt. It is better to do it right away (if the expenses are justified) than put it off for the future.

In the Q2’20 the German debt management office announced that the issue of bonds would be increased by EUR32.5bn, and by nearly EUR28bn in net terms. However, the real wave of new debt is the recently launched second issue increased by EUR32.5bn and by almost EUR28bn in net terms. In the Q3 the increase is estimated to reach EUR70bn (out of which up to EUR56.5bn falls on money market instruments and EUR33bn on capital market instruments). In turn, in net terms the total expansion of the debt securities is expected to reach more than EUR67bn. The Q3 will go down in history thanks to the first issue of the so-called green bonds, which will be used for environmental protection projects. In the last quarter, some experts expect a net increase in the bond issue reaching up to EUR40bn.

Other countries are not lagging behind. While at the beginning of the year the net supply of French bonds was expected to amount to about EUR69bn, as a result of a third budget amendment it will now increase by EUR55bn, to EUR124bn. As in the case of Germany, money market instruments are starting to gain more importance. At first the French only planned to issue such instruments for the amount of EUR10bn. The first amendment to the budget raised this amount to EUR27.5bn, the second increased their value to EUR64.1bn, and finally, the third one pushed the issue amount to nearly EUR79.9bn.

Italy will also be active in the capital market. It can be expected that in the Q3 the issue of bonds will reach the amount of EUR68bn, while the level of debt in relation to GDP may approach 160 per cent. This shows that the previously mentioned question concerning the usefulness of the public debt criterion becomes increasingly justified.

Spain, which has been affected by SARS-CoV-2 in a particularly painful way, has chosen a slightly different way of financing its needs. In May the country decided to increase the net issue of bonds by EUR97.5bn, to the level of EUR130bn. It should be noted, however, that Spain did not wait and started increasing the scale of its borrowing already in March. In the H1’20, the country’s debt increased by as much as EUR95bn, so the rate of expansion will probably be lower in the second half of the year. 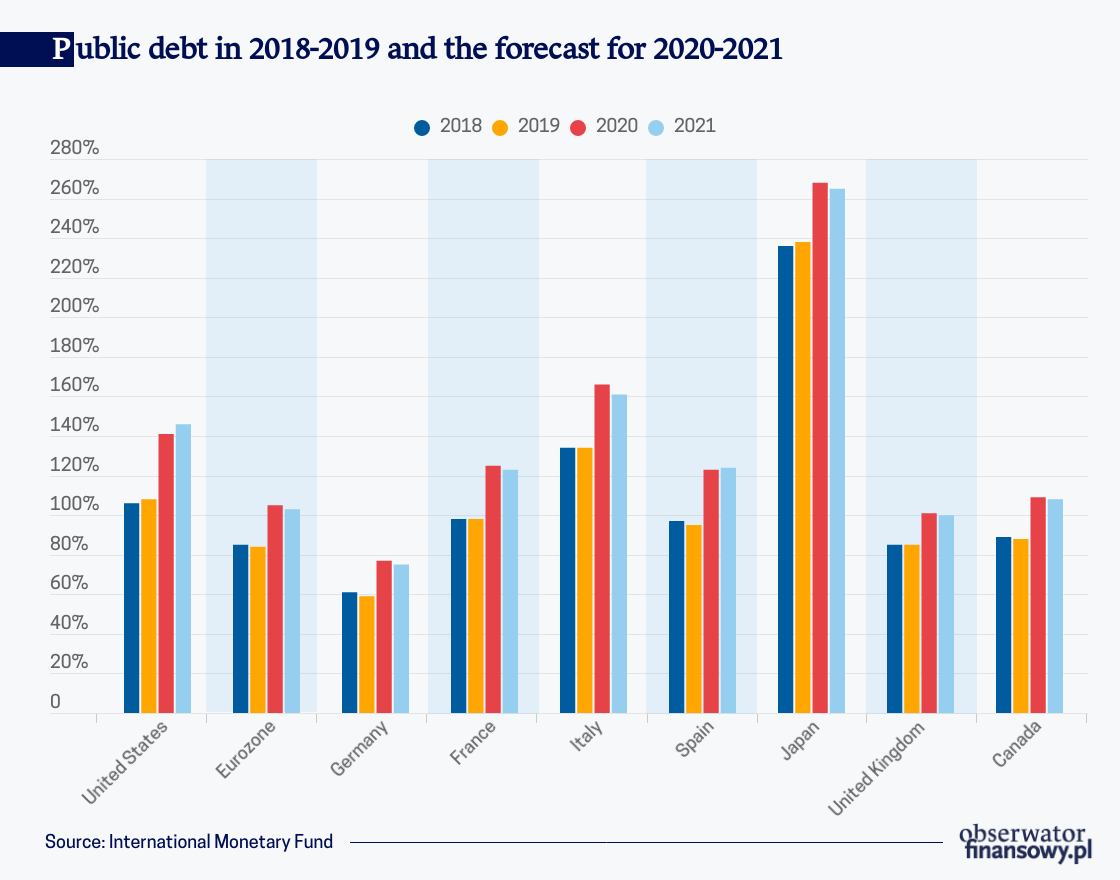 Japan is a separate case, because public debt in that country reached a level two times higher than the GDP more than ten years ago. Looking at this country, one can come to the conclusion that it’s possible to live with such high debt levels. And after all, European countries (with the possible exception of Greece and Italy) are still far away from public debt at double the size of their GDP. Does this mean that there are no grounds for concern? Or maybe we will end up paying for the excessive debt through higher inflation? Unfortunately, this risk cannot be ruled out.

Of course, a strong recessionary impulse (many countries will record double-digit declines in GDP) caused by the pandemic will protect us against increased inflationary pressures for some time. Another ally in this fight will be technology, which could be boiled down to online price comparison tools which allow users to choose the most attractive offers.

The problem is that the above factors, which provide a safety buffer, are important, but they are not the most important element of the system which has been generating low inflation in the last thirty years. In this respect the most important factor was the opening up of China and, in part, also the countries of Central and Southeast Europe. However, according to Professor Charles Goodhart this effect is now coming to an end. Moreover, it remains uncertain what will be the new economic policy of China, which is now being attacked from many parts of the world.

The rate of growth of the monetary aggregate M3 should already be a cause for concern. In the Eurozone it now reaches 9 per cent and is exactly two times higher than the reference point of 4.5 per cent, which was applied until 2003. And the fast rise towards the level of 9 per cent began as a result of measures aimed at slowing down the negative effects of the pandemic. In January, this rate still fluctuated around 5 per cent. The increase in the rate of growth of monetary aggregates is not limited to the Eurozone. The rate of growth of the money supply also gained momentum in the United States. Of course, there is still a long way to go from the growth of the given aggregate (M3 for the Eurozone or M2 for the United States) to higher inflation, but we should remain vigilant. Especially considering that the policy of the central banks is causing interruptions in the monetary policy transmission mechanisms, which is very worrying. We can already see that not everything is going in accordance with their plans. 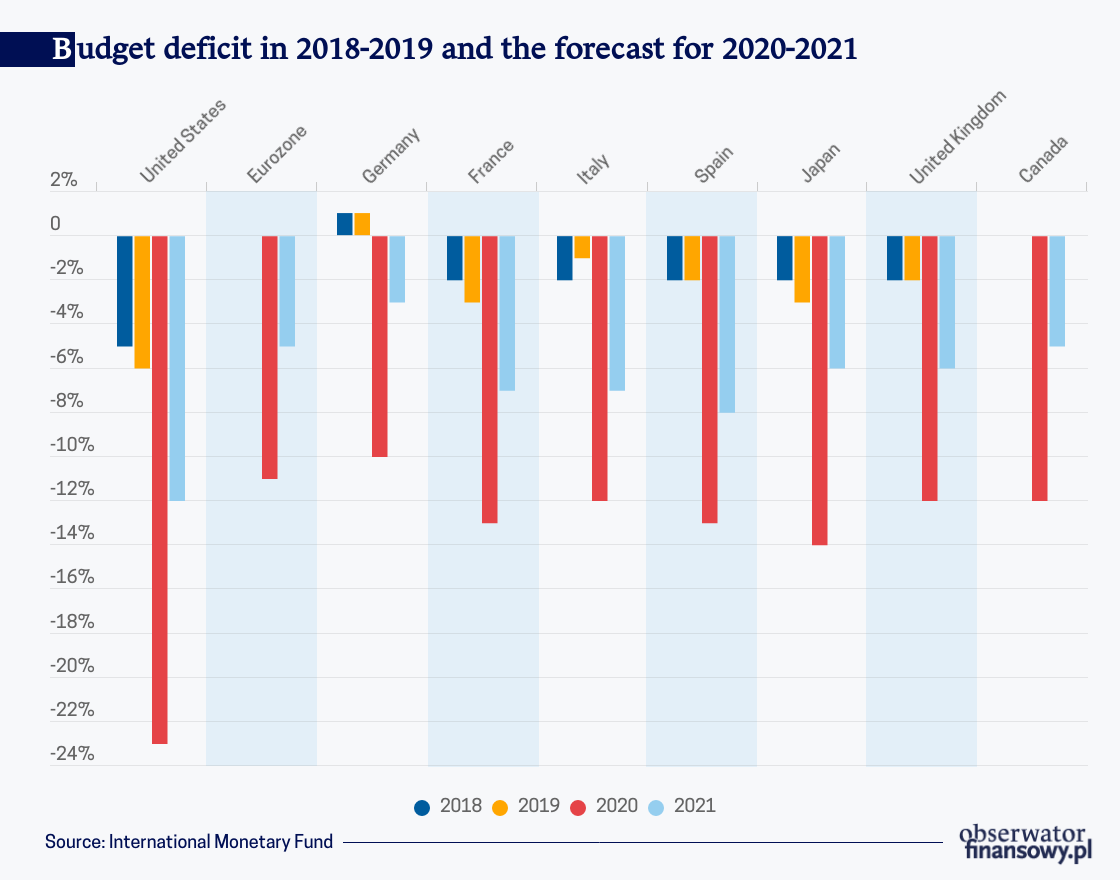