The IMF has less faith in emerging markets

The International Monetary Fund still believes that emerging markets will return to the economic prosperity which characterized them in the first decade of this century.

Every six months, the IMF publishes macroeconomic forecasts for the given year and the next five years, and the forecast for the five years ahead could roughly be regarded as an assessment of the long-term growth potential. Looking at the subsequent projections, it is clear that in recent years it has become almost a tradition that the IMF regularly makes downward revisions of its world economic outlook, and especially for the so-called emerging market and developing economies. The chart shows the evolution of the forecast of long-term growth of these countries’ GDP in recent years. This relates precisely to the GDP forecast for five years ahead. 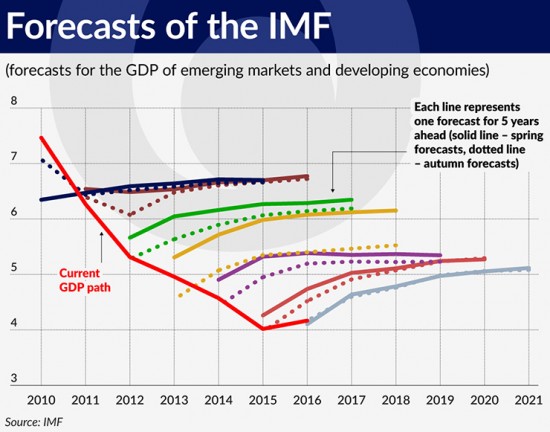 In the last report, published between September and October 2016, the IMF revised its long-term forecast for emerging markets by just a few hundredths of a percentage point, so the changes are not even visible after the figures are rounded. It currently amounts to 5.08 per cent, compared to 5.11 per cent in April.

The downward trend persists, however, and there are many indications that it will continue. Indeed, the current forecast is still above the long-term trend, which is 4.5 per cent, and also above the trend of 3.5 per cent from the years 1980-2000, before the beginning of the commodities boom and the massive inflow of capital to emerging markets.

The economists from the London-based analytics firm Capital Economics claim that the development boom of the first decade of the 21st century was a transient phenomenon and that the growth trend will return to the level recorded in the previous years, that is 3.5-4 per cent. They may have a point, because compared to the historical trends, the turn of the century seemed more like an aberration than the norm. The advantage of emerging markets over developed countries in terms of GDP growth was huge and was probably the result of several temporary factors. 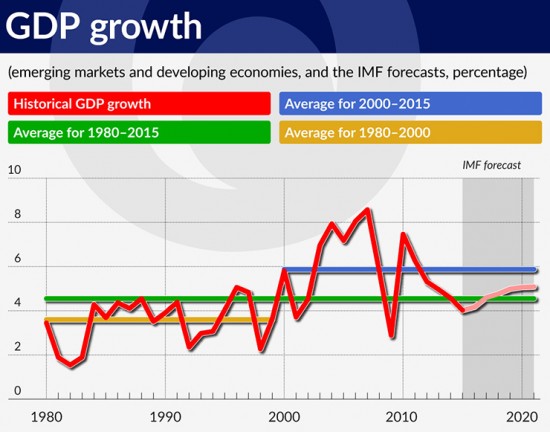 First of all, the rapid acceleration of the globalization of trade in the 1980s led to the reallocation of production to emerging markets by large corporations and the inclusion of these countries in the global added value chains. A change on such a scale will probably not be repeated. The service sector could theoretically undergo a similar wave of globalization, but there are many indications that developed countries will fight much harder than in the past to keep production at home.

Secondly, in the 1980s and 1990s many countries reaped the initial benefits of transformation from a planned economy to a market economy. This applies, for example, to China, India, and the countries of Central and Eastern Europe. A part of the growth wave caused by this transformation may have been transient in nature, since the elimination of obvious inefficiencies does not last forever.

Investors are aware of all these doubts and already revised their expectations for emerging markets a few years ago. Capital flight, currency devaluation, a huge markdown in commodity prices – all these foreshadow a slowdown of growth in emerging markets and a loss of investor confidence in these markets. Paradoxically, while the IMF is revising and will continue to revise its growth forecasts downward, the market is slowly starting to show tentative signs of optimism. This can be seen in the price rebound in the commodities market, stabilization of the prices of assets strongly linked with the economic situation in Asia (e.g. the Australian dollar), and the growth in prices of stock indices associated with emerging markets (e.g. the MSCI Emerging Markets).

These are still cautious movements, however, which involve the selective picking of opportunities resulting from low prices, rather than riding the wave of new trends.

Ignacy Morawski is the leader of Public Policies and Governance program at WISEEurope (Warsaw Institute of Economic Studies). 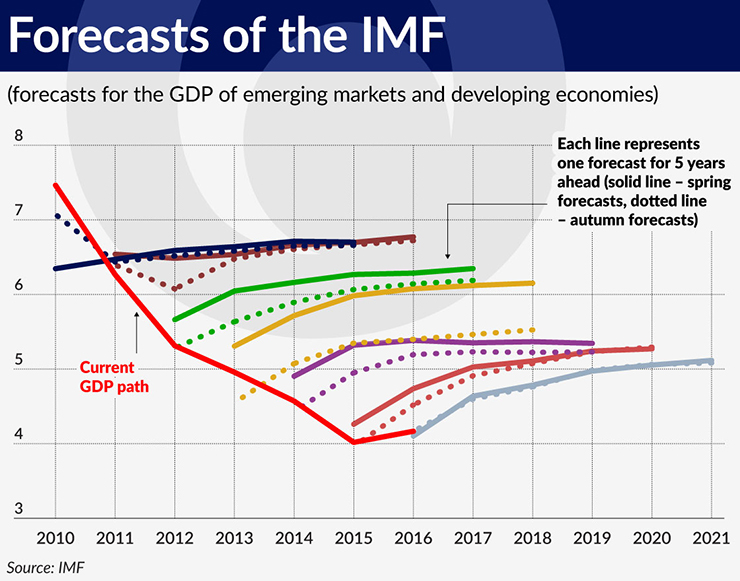 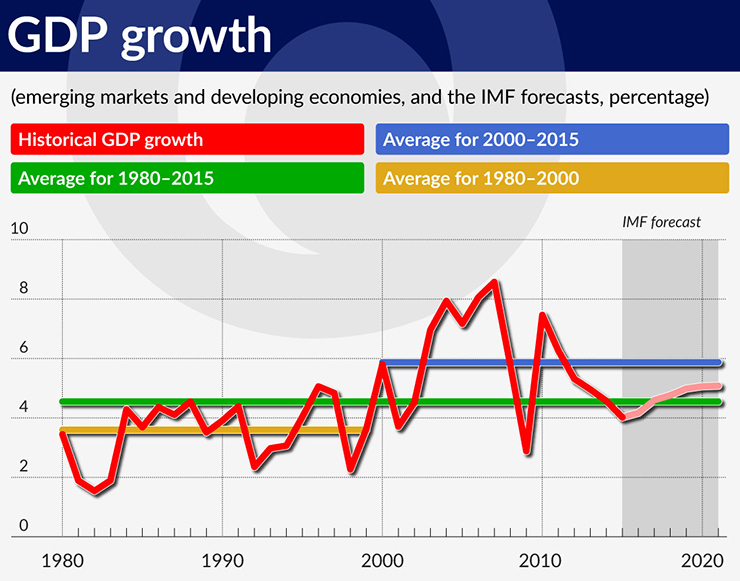