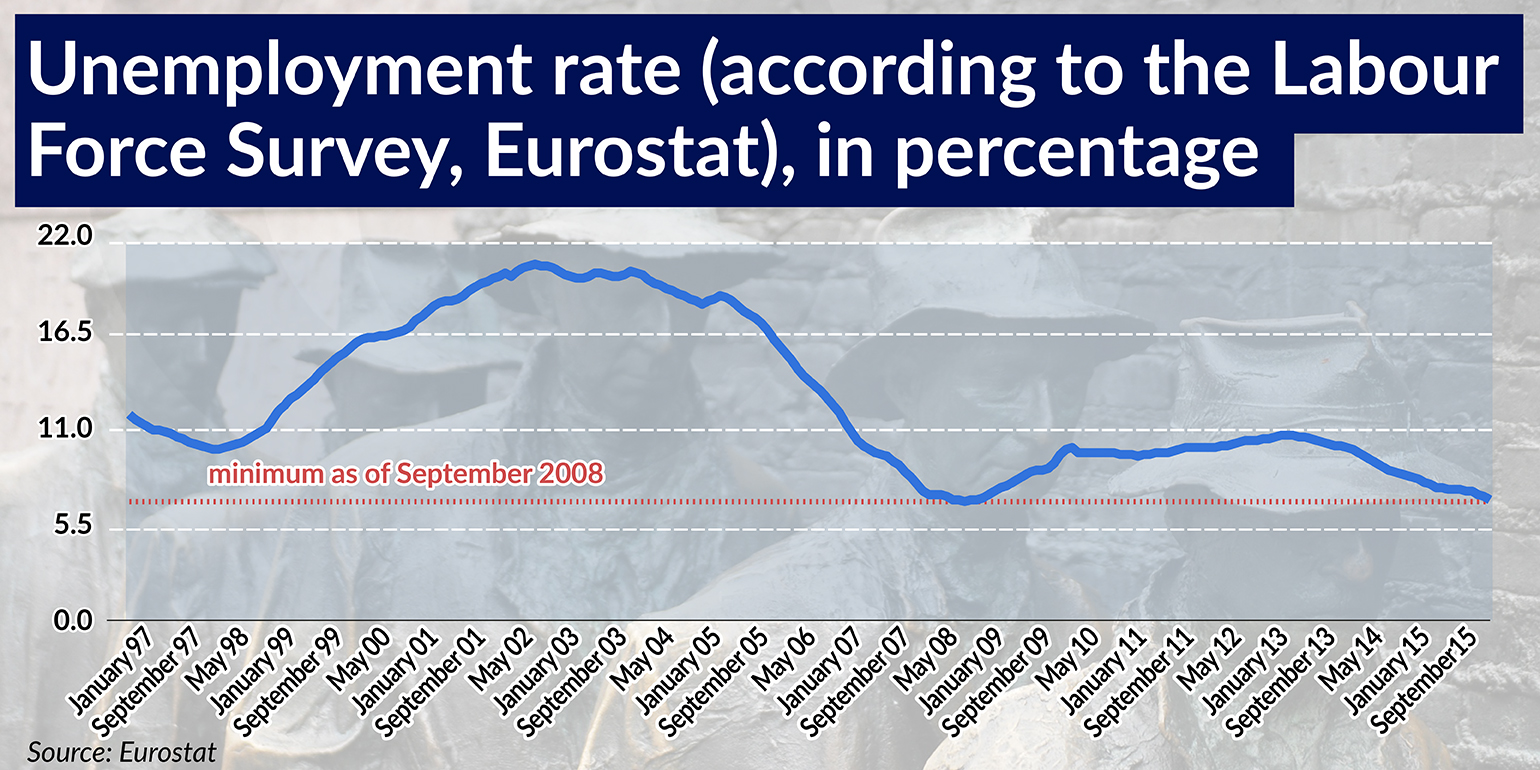 However, there have been noticeable changes in relation to the years 2006-2008, when it was also possible to talk of an employee’s market. Despite everything, the situation is more difficult today, especially for young people and the less educated.

In March 2016, the unemployment rate in Poland fell to 10 per cent and was 1.5 percentage points lower than in March 2015. Thus it was the lowest unemployment rate in the recent history of the Polish market economy. The trend is downward and there are no indications that it should suddenly stop. Poland will soon be able to announce that it has never had such a low unemployment rate since the systemic transformation.

Talk of an improving labor market often triggers the following response: “please tell that to the ordinary people”. There is a common belief that the good news about unemployment is not reflected in the experience of the people. This belief, however, is incorrect. Various polls show that household sentiment has clearly improved in recent months. The consumer sentiment survey, conducted by the Central Statistical Office, shows that the overall measures of consumer sentiment are close to the peaks from 2007 – people are increasingly positively assessing their current financial situation, their prospects, the economic prospects of the country and express an increasing propensity for major purchases.

The survey of the attitudes of Poles conducted by the Public Opinion Research Center (CBOS) also indicates similar trends. In January 2015, for the first time since the beginning of the transformation, more than 50 per cent of people responded that their situation was generally good. By the beginning of 2016, this percentage had risen even further to 55 per cent. Even with the knowledge of all the shortcomings of opinion polls, it is hard to disregard such results. Of course this does not mean that everything is all right and that everyone is doing well. In many ways the Polish labor market is still functioning poorly and these weaknesses are currently clearly visible.

All the major macroeconomic indicators describing the job market look very bullish – to borrow a phrase from the stock market – for employees. This is not just a matter of falling unemployment. Employment growth is relatively high and reaches 1.5-2 per cent annually which is clearly above the growth rate of the working-age population. Moreover, companies are willing to continue hiring. Manpower or Randstat surveys show that at the end of 2015 there was a clear increase in companies declaring a willingness to increase employment. The influx of new job offers to employment offices is clearly higher than during the golden years of 2007-08. Importantly, there is an acceleration in the growth of employment for an indefinite period, and a decrease in the growth of employment for a specified period of time, which could mean that companies are not afraid to take risks.

The growing demand for labor is followed by wage growth, which is clearly above the historical average – it has reached 4 per cent, compared to an average level of 3 per cent. Such a high real increase in wages can be partly explained by deflation, but the main factor driving the increase is the growing demand for workers.

However, although unemployment is at its (almost) record low, the situation of workers is not nearly as good as during the previous record period in 2008. First of all, the pace of changes is slower: the decline in unemployment is slower and the increase in employment and wages is lower. The equilibrium rate of unemployment (the rate at which the wage growth rate does not increase) is also much lower, that is, the scale of tensions on the labor market is lower.

We can also see this in the surveys. According to studies carried out by CBOS, almost half of the surveyed people currently find it difficult or impossible to find a job, while in 2008 this figure was less than 40 per cent. This may even be beneficial for the economy because it is not overheating. 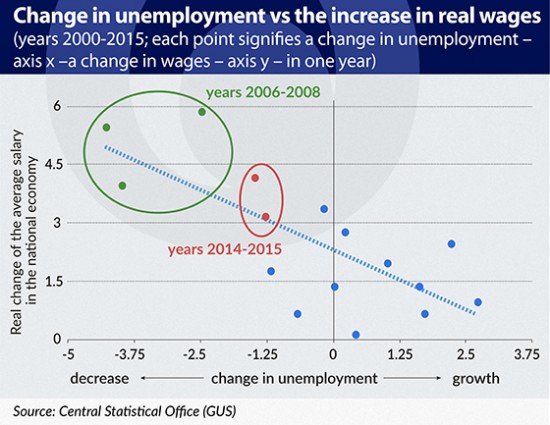 More important, however, are the more structural differences, which indicate deeper non-cyclical changes in the labor market which have occurred since 2008.

Changes in the labor market

First of all, the labor market today is more selective than 8 years ago. Today, there is a high demand for managers, professionals, and middle- and senior-level office workers, but the demand for less skilled workers, craftsmen, industrial workers, etc. is lower. To use the terminology popular in the United States, „white-collar workers” are doing fine, but the situation of „blue collar workers” is worse. In the years 2006-07, there was demand for almost all of the occupational groups, but today the situation is different.

For this reason, averaged labor market indicators may inadequately reflect the most important trends in the market. There are sectors of the economy where the demand for labor far exceeds the supply, and there are other areas where it is hard for workers to find a job. On websites with job offers we can easily notice the enormous demand for workers from the service centers of foreign corporations, which are mainly concentrated in the large cities. The situation is different in smaller towns, where the majority of Poles live.

The higher selectivity of the labor market is also visible in the situation of young workers, who are often at the centre of attention of politicians. While the general unemployment rate is at a level close to that of 2008, the unemployment rate in the age group of 15-24 is still clearly higher than back then. This coincides with the observation that the demand for labor is the highest among professionals, and the lowest among less skilled workers. Young people are characterized by low productivity, and in this respect they are often similar to unskilled workers.

This could also be a part of the reason for the radicalization of the political attitudes of the Polish youth in recent years. Sociologists have already noticed it, but every attentive observer can probably see it with the naked eye. Although unemployment is low, Poland is a country where it is very difficult for young people to find a job – a large part of them are not even looking for work. Professional activity (working and unemployed persons as a percentage of the population in a given age group) in the age group of 15-24 in Poland is about one-quarter lower than the average in the European Union, and has remained practically unchanged since 2008.

Part of the reason why young Poles are less professionally active may be the fact that in Poland more people (especially women) are intent on obtaining a higher education degree than the EU average. In the EU as a whole, however, there is almost no correlation between the percentage of persons studying and the professional activity of young people. Seven EU countries have a higher percentage of young people studying than Poland, and five of them also have higher professional activity of young people than Poland. There are probably some structural blockages in Poland that make it harder for young people to enter the labor market.

In addition to the situation of young people, Poland also has a problem with the professional activity of people over 50 years of age. In this case, however, there is a positive trend which should be noted – for the past few years professional activity in these age groups has been rising and has occurred without an increase in unemployment. Still, Poland has a lot of catching up to do in relation to the EU average, not to mention the leaders.

If Poland is to withstand the fiscal pressures which will inevitably arise as a result of the aging of the population (a decrease in pensions and, consequently, an increase in social benefits for the elderly and an explosion of health care costs), it needs to boost professional activity. This should be one of the strategic objectives of Poland’s economic policy. 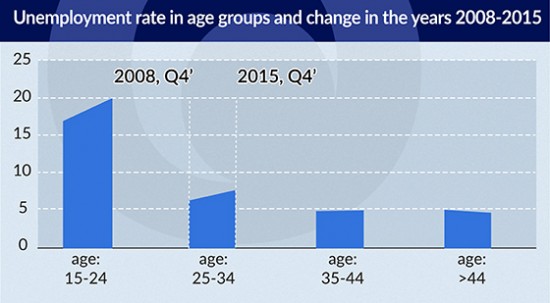 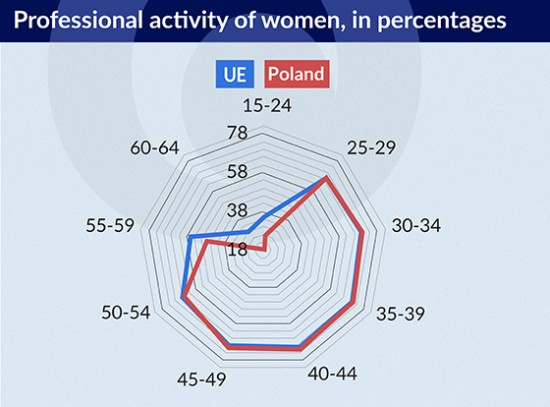 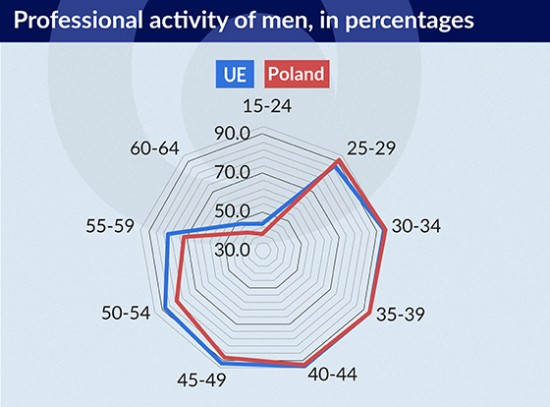 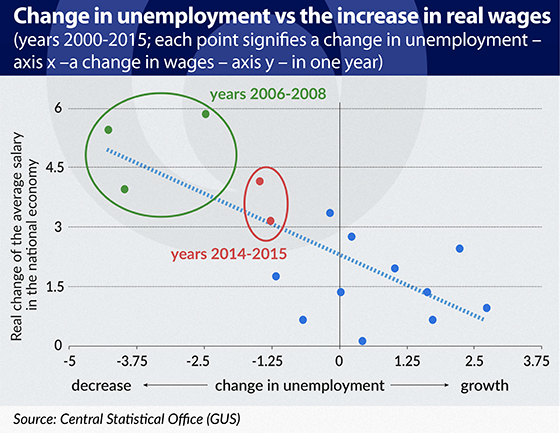 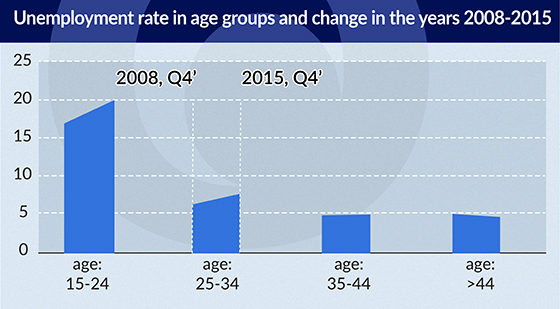 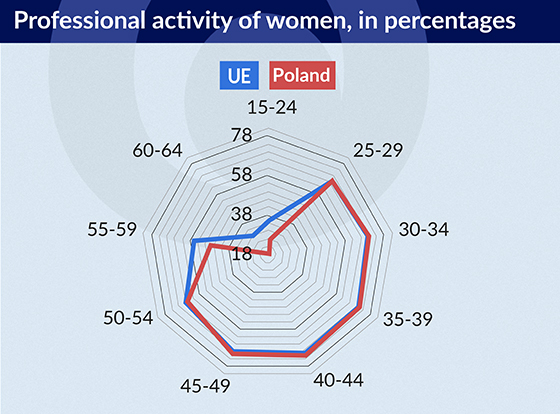 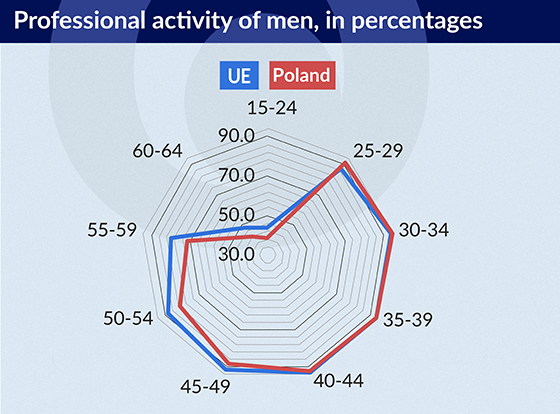