According to the employment agency, Work Service, and its 5th Report on Polish migration only 11.9 per cent of respondents replied that they were considering moving abroad which was the lowest level since the beginning of the year, and down by 7 per cent.

Where do they go?

The surprise was the United States coming in the third place with 8 per cent. Reasons for this, said Mr. Inglot, press spokesman for Work Service, could be the possibility of visa restrictions being waived by the future President Trump.

Generally, a sojourn abroad is becoming riskier. Brexit worries, terrorist attacks in Western Europe added to the anxiety; better to wait at home and see how macroeconomic events pan out.

Who is the most keen to migrate?

Mainly youngsters between the age 25 and 34 are considering the move (40 per cent). The youngest age group 18-24 experienced a sharp drop in enthusiasm (22 per cent). Seventy six per cent of respondents who are considering moving abroad have already had a job, with 41 per cent being permanent positions. In the previous years the unemployed were the most keen to migrate. Now, it is the group with secondary and professional education and constitutes 56 per cent of all potential emigrants, although 5 per cent less than previously.

Why do Poles emigrate and why they don’t

Unsurprisingly the major reason is family and friends. 70.6 per cent of respondents citing this as the primary brake, but second comes the attraction of jobs in Poland itself-36.9 per cent. The language barrier constitutes the third highest reason at 23.8 per cent.

Where do they want to work?

Construction-18 per cent, Agriculture- 15 per cent and logistics and transport-14 per cent are the three most popular sectors sought by potential migrants but the desire to start one’s own enterprise comes in at fourth with 12 per cent, beating the traditional hotel and catering sector by 6pp. 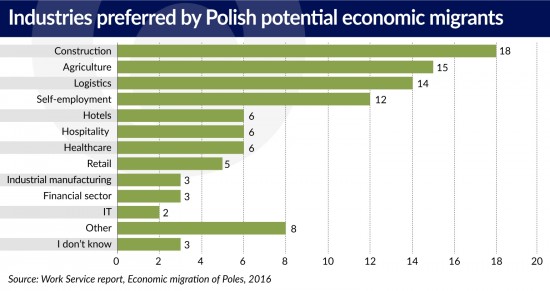 Time to fight for Ukrainians

Despite the decrease in those willing to move, the trend to migrate will doubtless continue. Thus Poland badly and quickly needs to retain its existing Ukrainian workers and attract more of them permanently.

The westward movement leaves a gap in the Polish labour market that is being filled by Ukrainians, up to a million in Poland alone. Polish visa and entry restrictions coupled with a system of short-term (usually six months) work permits mean that Ukrainian workers are dissuaded from staying in Poland, bringing over their  families, paying taxes and spending their earnings in the local economy. Instead they hoard their pay to send back home (we wrote about it here), staying only for a few months, often working in the cash economy and saving every Polish zloty.

The solution, and one that the Polish government seem to be waking up to, is to ease restrictions and open the borders. Otherwise, despite the linguistic and cultural proximity, Ukrainian workers will be tempted to go westward, for example to Italy where 400,000 are estimated to work, with 10,000 work permits being issued recently by the Italian government.

Another possible source of labour is Belarus.  Mr. Inglot stated that the potential for assimilation into Polish society and economy is even greater with Belarussian than Ukrainian immigrants.

Flexibility and once more flexibility

Can the existing social model of society still work? Does the minimum wage cause more problems than it solves? How society can cope with the demographic time bomb, and what about job security, the Holy Grail of employment policies?

These were topics discussed during the conference entitled „Where is the labour market heading?” organized by the Work Service and Committee for Social Dialogue (Komitet Dialogu Społecznego). While concentrating on the recent data compiled by the Work Service the conference branched out into a panel discussion on the current state of the Polish job market and then into a quasi-philosophical conversation about the future shape of employment set against global trends such as robotics, digitalisation and ‘Uberisation’ of the workspace; the challenges of globalisation.

Experts addressed the problems facing Western society in the age of globalisation, its workforce and indeed, civilisation with candour and seriousness. Whilst not approaching the rather apocalyptic view https://www.theguardian.com/commentisfree/2016/nov/23/donald-trump-climate-change-war of George Monbiot in the Guardian, no one can accuse the experts of having their heads in the sand.  As Andrzej Arendarski, head of the National Chamber of Commerce (Krajowa Izba Gospodarcza) said, the „number of new workplaces has always been the benchmark of politicians”. 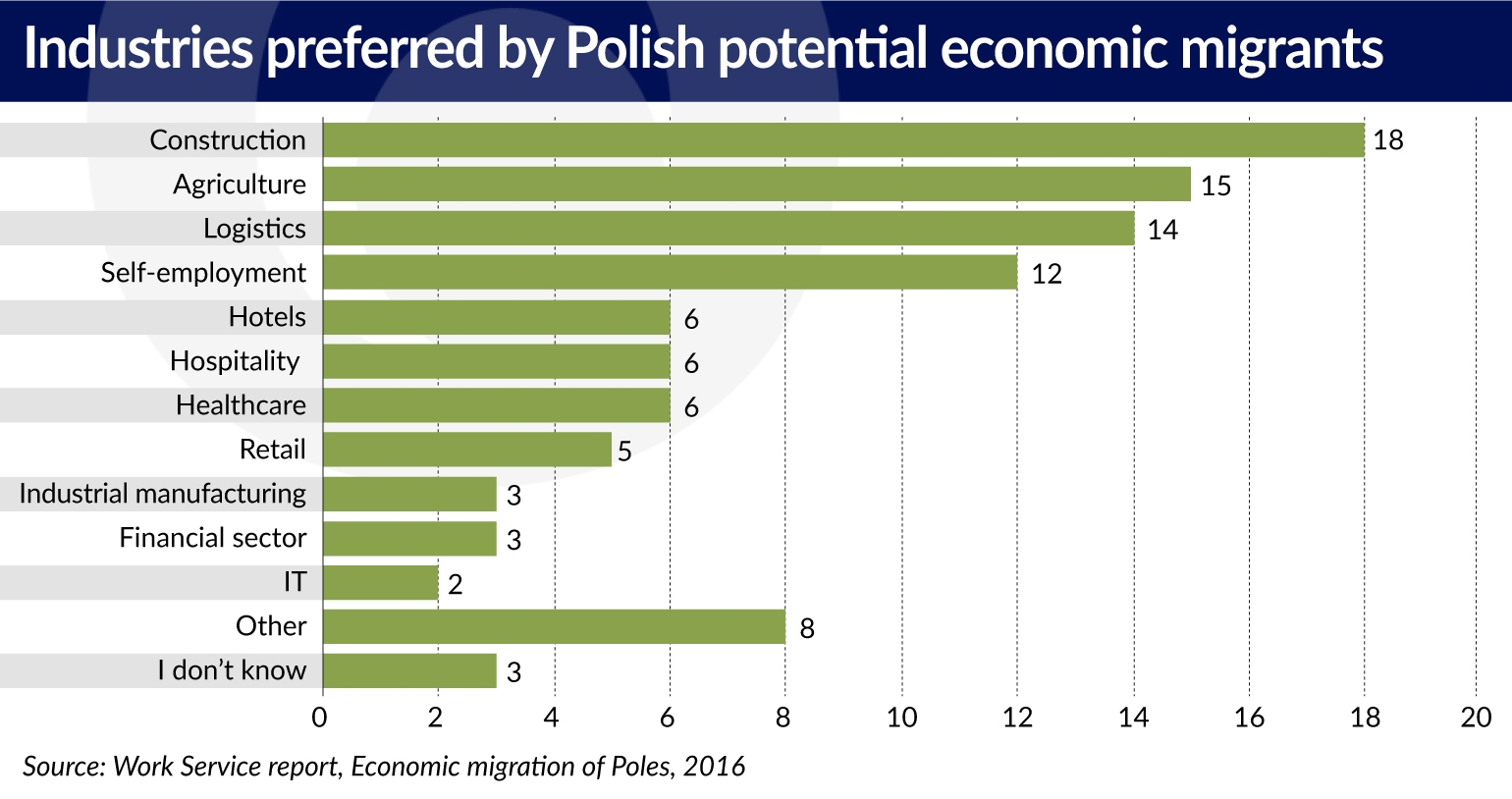