The Visegrad Group countries are closer politically than economically

Over the years, the Visegrad Group was more of a geographical rather than a political concept. Currently there is a political rapprochement between the countries of the group.

Is it possible to deepen the economic integration as well? In order to answer this question, it is worth  taking a look at the economies of the four countries of the group.

The Visegrad Group (V4) was established after the meeting of the Presidents of Poland and Czechoslovakia and the Prime Minister of Hungary on February 15th, 1991 in a castle in the Hungarian town of Visegrád. The meeting alluded to the meetings of the kings of Poland, Bohemia and Hungary held in this town in 1335 and 1338.

After the dissolution of Czechoslovakia, the Visegrad Triangle turned into the Visegrad Four – Poland, Hungary, the Czech Republic and Slovakia – but the relations between the four countries were not devoid of competition. However, in recent months the Visegrad countries are trying to create a block within the European Union, presenting a common position on various issues.

The potential of the V4

While in terms of the population the V4 group could be compared with Germany, its GDP is nearly 4 times smaller, and the exports are 2.5 times lower. The total GDP of the V4 at current prices is a little larger than that of the Netherlands, and after adjusting for the purchasing power of the currencies it is more or less equal to the GDP of Spain.

Poland is by far the largest country of the V4 group. It accounts for 60 per cent of the population of the Visegrad Group and 55 per cent of its combined GDP.

The history of transformation in the V4 countries was similar, although there were certain differences concerning economic policy that have affected the growth rate. The clear leader in this respect is Poland with GDP currently more than twice as high as in the last year before the beginning of the transformation. The country lagging behind is Hungary, whose successive governments – both left-wing and right-wing – stimulated consumption at the cost of lowering investment and increasing the public debt.

Slovakia is the only country of the V4 group which joined the Eurozone. The other countries remain hesitant towards the single currency. The coalition government in the Czech Republic announced that it will not take action to enter the ERM-2 mechanism, seen as the euro area’s “waiting room”, before the next election in 2017, and that if the coalition remains in power after the elections, by 2020 it will draw up a “road map” for the adoption of the euro.

The government of Viktor Orban also represents a Eurosceptic approach. The National Bank of Hungary announced the issuance of a new series of forint banknotes for the year 2018. The government is not taking any action in order to join the euro area, but in contrast to the Czech Republic and Poland, most Hungarians are in favor of the single currency. According to the Eurobarometer survey from April 2015, the adoption of the euro was supported by 60 per cent of Hungarians, while 35 per cent were against it.

The Czech Republic had the fastest growth rate in 2015

The Czech Republic only came out of a long recession – which was the result of austerity policies and economic downturn in the Western European countries – in the second half of 2013. The government of Petr Necas (who held office from July 2010 to July 2013) raised taxes and cut investment spending which allowed for a reduction of the deficit and the public debt and created good conditions for economic expansion lasting since 2014. Last year, the Czech Republic had the highest GDP growth rate in the region. The stable economy was appreciated by the financial markets – the yield on government bonds is lower than that of German bonds.

According to the most recent information provided by the Czech Statistical Office (Český Statistický Úřad), economic growth in the second quarter of 2016 slowed down compared to the second quarter of 2015 and amounted 2.6 per cent, compared with 3 per cent in the first quarter of 2016. The slowdown is mainly due to a 4.5 per cent decrease in investment, which occurred as a result of a lower absorption of EU funds. The increase in consumption was also smaller and amounted to 2.2 per cent. The largest role in GDP growth was played by exports which grew by 5.7 per cent, while imports grew by 3.1 per cent. 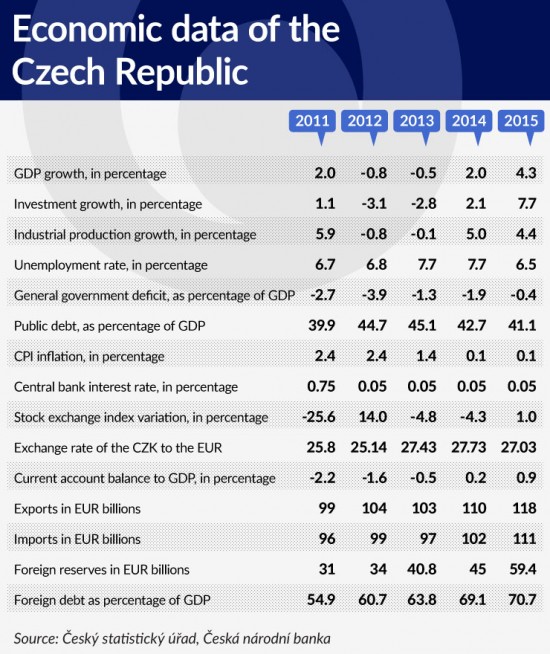 Leading indicators suggest that in the second half of the year the growth rate will remain at a similar level as in the first half. The PMI indicator was over 50 (in July it was below 50). The indicators of investor and consumer sentiment have improved slightly, although they are still below the multi-annual average.

Hungary has an unorthodox approach to the economy

The Hungarian government, led by Viktor Orban since 2010, is trying to conduct an unorthodox economic policy, the goal of which is to accelerate growth and increase the sustainability of the economy. The public finance sector was partly balanced through the State’s takeover of the savings of the pension funds, as well as tax increases. The general government revenues increased from 44.3 per cent of GDP in 2011 to 48.7 per cent of GDP in 2015. Income taxes have been lowered but VAT has been raised to the highest level in the European Union – 27 per cent.

The Hungarian government introduced special sector-specific taxes, but later gradually withdrew or modified them. It tried to attract foreign investors to specific areas of the economy, e.g. the automotive industry. A public works program has been carried out since 2011. Unemployed people who want their benefits to continue after the expiry of 180 days from losing their job are required to participate in public works for at least 4 hours per day. The program resulted in a marked decline in the unemployment rate.

The National Bank of Hungary (Magyar Nemzeti Bank, MNB) is conducting an unconventional monetary policy. In the years 2012-2016, interest rates were reduced by more than 5 percentage points. Interest rates were reduced six times in 2015 and three times in 2016, and the base rate is currently 0.90 per cent. In order to support the investments of small and medium-sized enterprises, in 2013 Magyar Nemzeti Bank introduced the Funding for Growth Scheme (FGS), under which it provided interest-free loans to commercial banks, and in turn, the banks committed themselves to make these funds available to companies in the form of low-interest loans (up to 2.5 per cent annually).

In spite of the FGS program credits for the private sector decreased. This was the result of the difficult situation of the banks, burdened by the costs of conversion of foreign currency loans. In September 2016, MNB decided to reduce the requirements for deposits kept by commercial banks at the central bank in order to force them to increase lending activities.

The greatest achievement of Orban’s policies was the reduction of the Hungarian economy’s dependency on foreign capital. The improvement was the result of a substantial surplus obtained by Hungary over the past four years on the current account balance of payments, as well as the low levels of interest rates on world markets.

In 2014, Hungary achieved the highest growth rate among the countries of Central and Eastern Europe – 3.6 per cent, but in 2015 the growth rate decreased to 2.9 per cent. In the first quarter of 2016, GDP increased by about 0.9 per cent compared to the first quarter of 2015, and by 2.6 per cent in the second quarter of 2016. Leading indicators suggest, however, that there is no acceleration in the Hungarian economy. In August, the Minister of Economy Mihály Varga announced that in the autumn the government will present a package of reforms which will include a reduction of the social contributions paid by employers and a reform of the labor market. 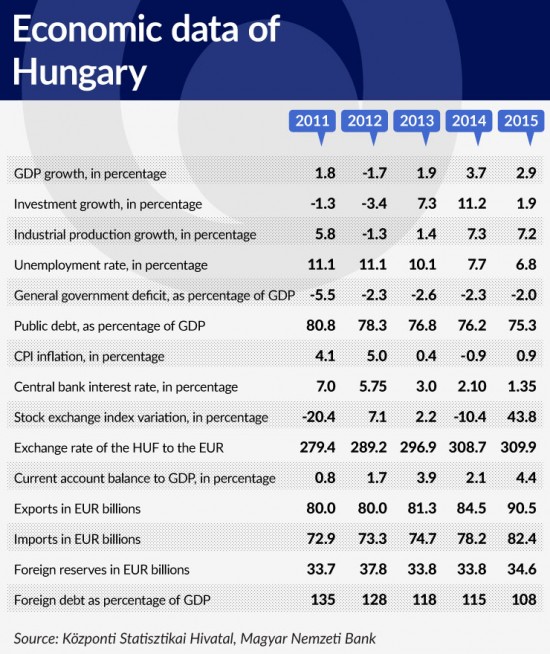 Slovakia is faring well in the Eurozone

Despite its participation in the euro area, the Slovakian economy has fared quite well during the global financial crisis. Unlike most countries in the Eurozone, it did not suffer a second recession in 2012. Although economic growth is significantly lower than before 2008, it is still among the highest in Europe.

This year the growth rate of Slovakia’s economy will be lower than last year, when growth accelerated as a result of the absorption of European funds. In the first quarter GDP growth amounted to 3.3 per cent, and in the second quarter it reached 3.7 per cent. According to forecasts, growth will reach approx. 3.2 per cent for the entire year. 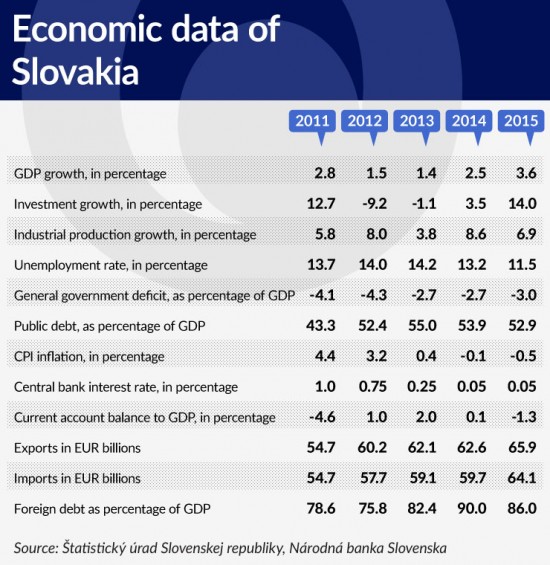 The main driver of growth is strong consumption and the good performance of the foreign trade sector. In mid-August, the government presented a draft budget for the next year and forecasts for the following years, according to which in 2019 Slovakia will obtain a small budget surplus. A deficit at the level of 2.0 per cent is planned in the current year and a deficit of 1.7 per cent next year.

Poland is the best in the long term 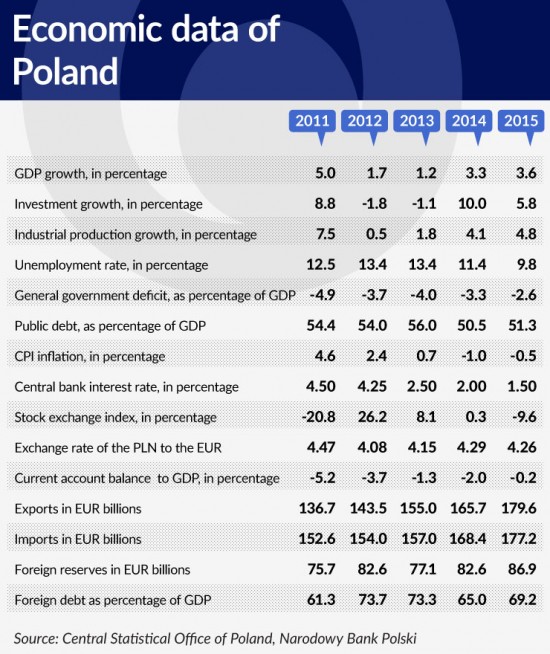 Its biggest macroeconomic problem is unstable public finances. The public debt is increasing  year by year, not only in absolute terms, but also in relation to GDP. The reduction in the public debt that occurred in 2014 was a result of the State’s takeover of the savings from the Open Pension Funds.

Mutual trade ties are not that strong

The V4 countries are connected by history, including economic history. For hundreds of years the Czech Republic, Slovakia and Hungary were part of the Austrian Empire, and for several decades they were part of the economic organization Comecon (Council for Mutual Economic Assistance), alongside Poland. In the 20th century, the Czech Republic and Slovakia were one state. Therefore, the trade ties between the countries of the V4 should be very strong. 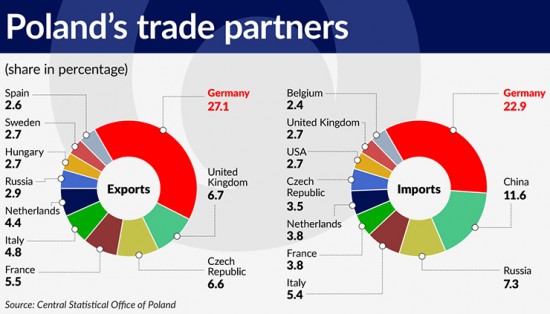 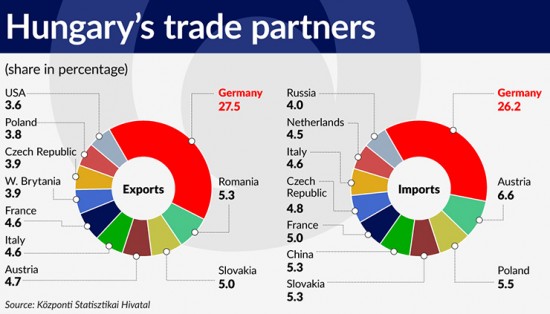 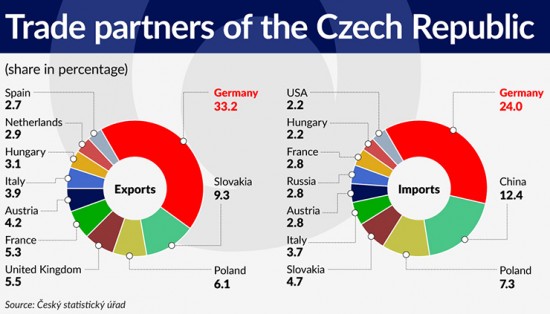 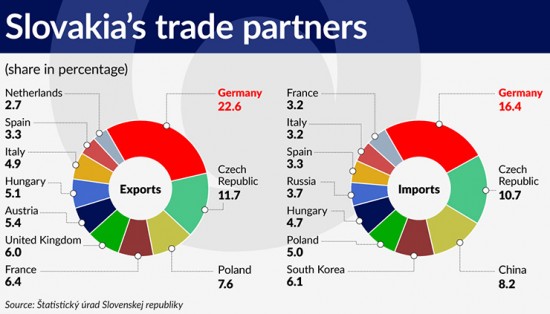 Also in terms of direct investment it is capital from Western Europe that prevails in the countries of the V4. In Poland, until the end of 2014 the largest investments were made by capital from the Netherlands, followed by Germany, Luxembourg, France, Spain, Italy, Cyprus, Austria, the USA and the United Kingdom. Hungarian companies invested EUR648m, Slovakian companies – EUR337m and Czech companies – EUR172m. More money was invested by companies from more distant countries: Malta (EUR733m), Norway (EUR1.032bn), Finland (EUR1.5bn) and Denmark (nearly EUR3bn).

In the Czech Republic until the end of 2014 (the Czech National Bank still has not published the data for 2015) first place was occupied by capital from the Netherlands, followed by Austria, Germany, Luxembourg, France, Switzerland, Cyprus, Slovakia and the USA. Until the end of 2014 Polish investment in the Czech Republic amounted to EUR1.314bn, which puts Poland in 13th position in the ranking.

The National Bank of Slovakia provides information about foreign direct investment only up to the year 2008. Up to that year the largest direct investments were carried out by companies from the Netherlands, followed by capital from Austria, Italy, Hungary, the Czech Republic, Cyprus, Luxembourg, South Korea, the USA and France.

The economies of the four countries of the Visegrad Group are similar to each other. They have a high share of industry in their GDP, they are trying to attract foreign investment and they are competing against each other in that field by striving to offer the best conditions. They are dependent on the import of raw materials (mainly from Russia) and they are looking for markets, primarily in Western Europe. With all due sympathy – for the time being the conditions for a deeper economic integration of the Visegrad countries are nowhere in sight. 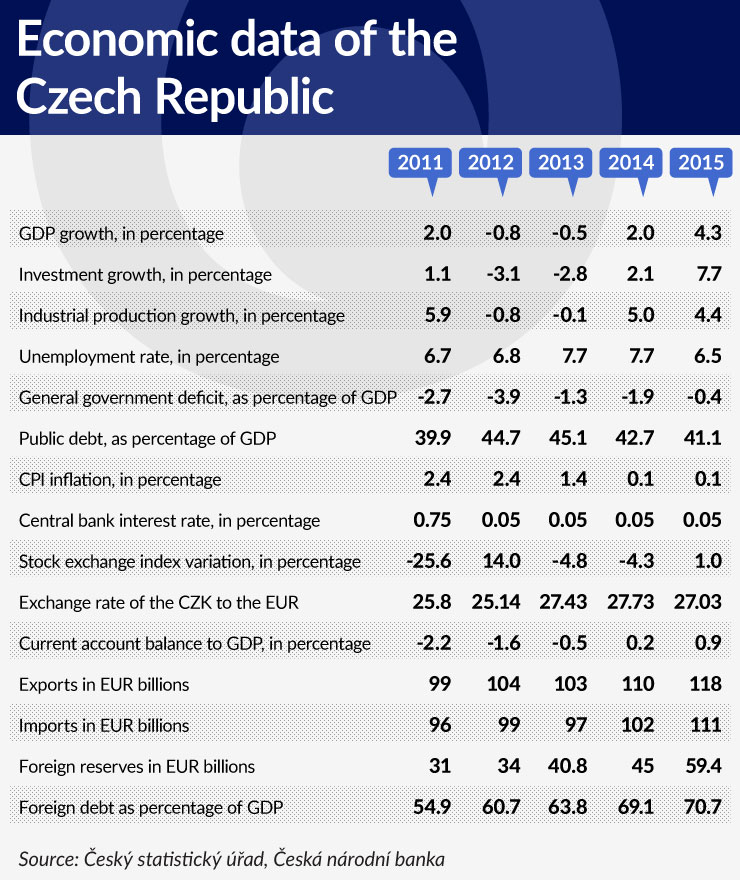 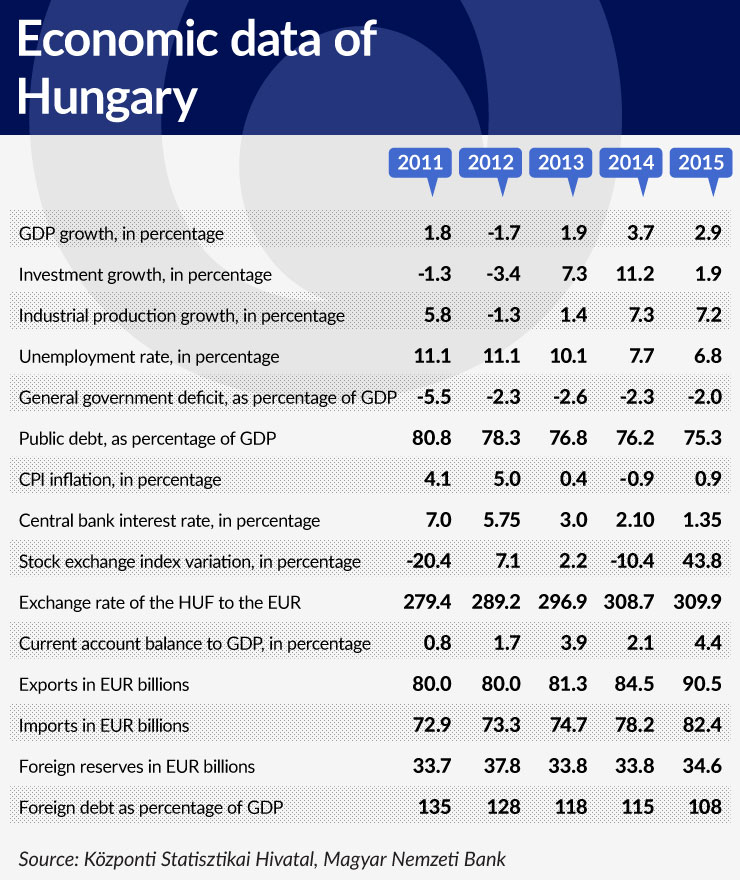 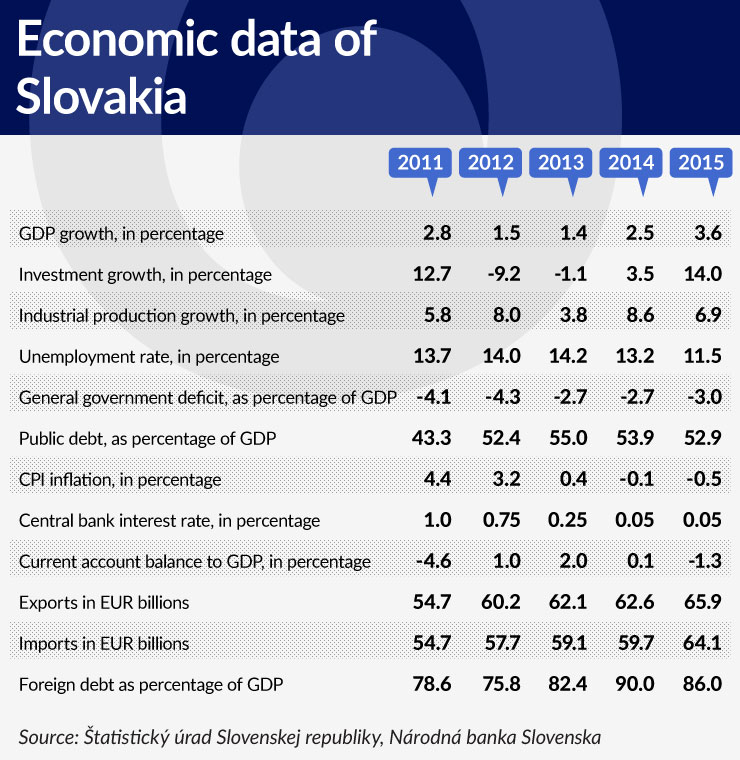 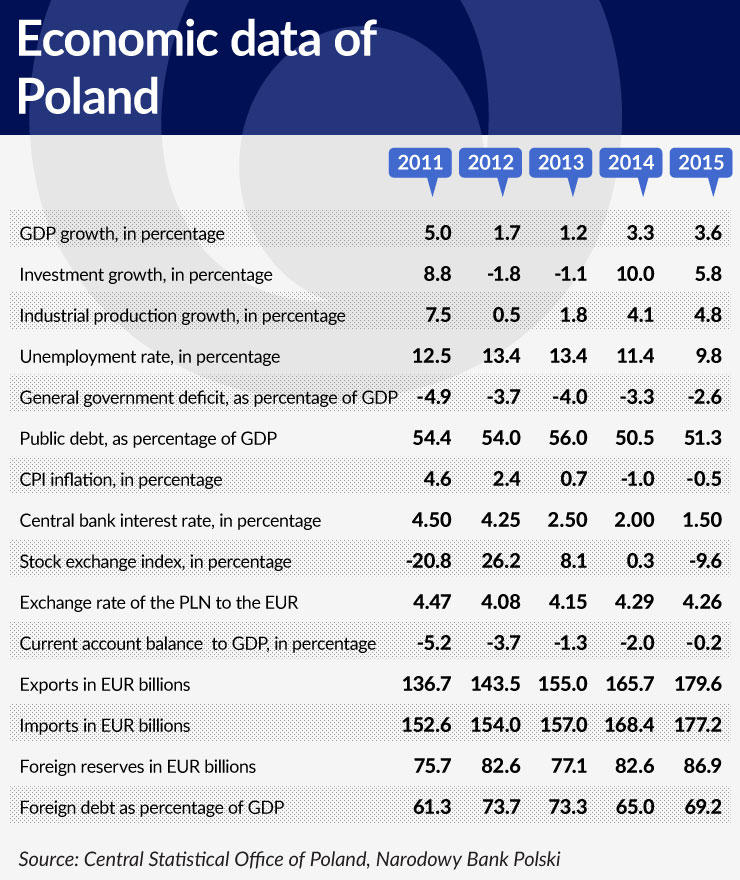 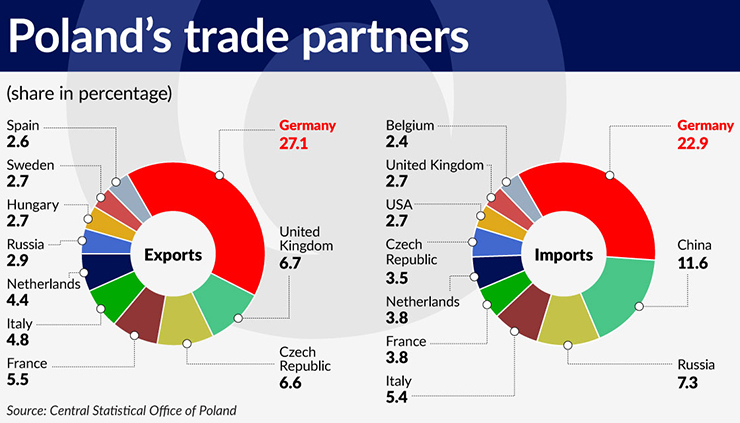 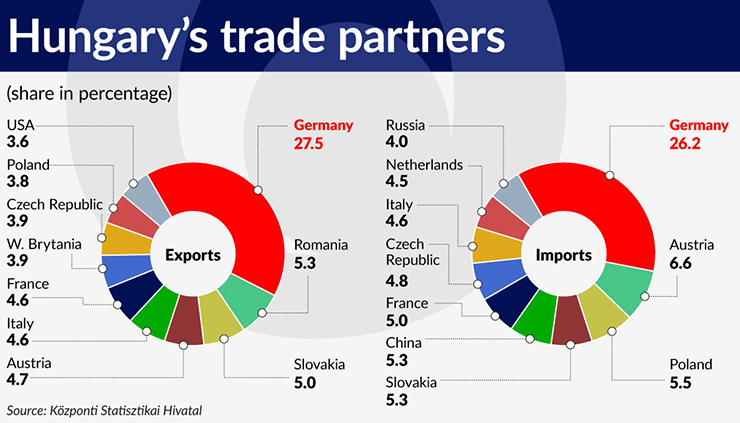 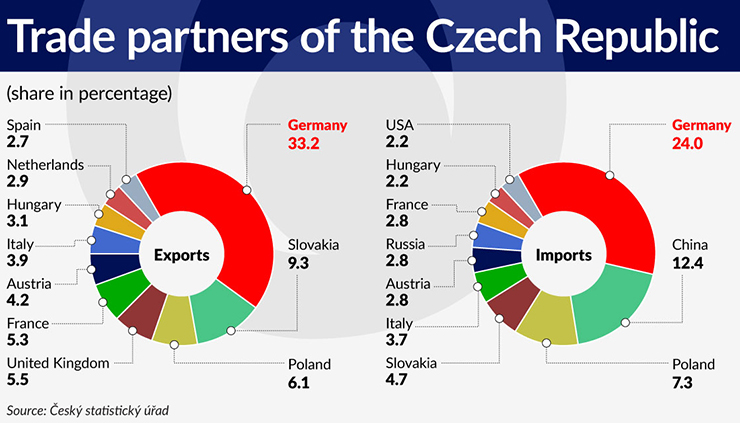 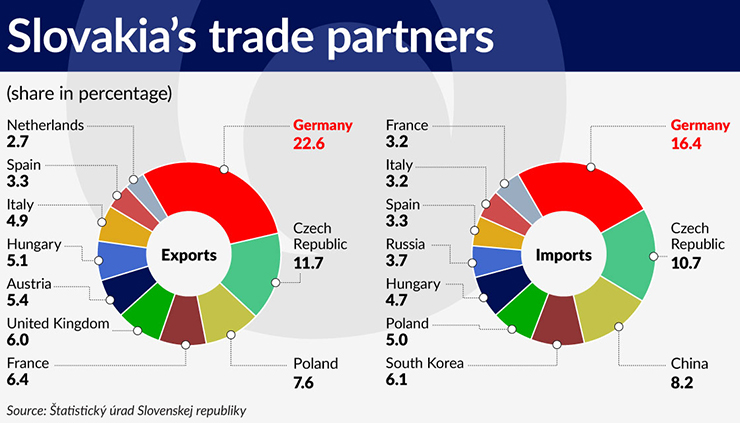