Many Lithuanians prefer to shop in Poland

In Lithuania, public holidays are an opportunity for many Lithuanians to take advantage of a day off and go shopping in Poland.

On such day it is quite difficult to find a free parking place close to a shopping center or a retail store in Suwałki, a town in the north-east of Poland, about 30 kilometers from the Lithuanian border. Parking places are mostly “occupied” by vehicles with Lithuanian number plates.

Many of Lithuanian come from quite distant regions of the country; they travel from as far as Vilnius, Kaunas, and other cities relatively remote from Suwałki. They are willing to spend a few hours in a car to travel to Poland in order to buy cheaper food in Poland. In spite of appeals made by politicians to strengthen the Lithuanian domestic market, Lithuanians prefer to shop in Poland.

Over a year ago, Arturas Margelis, the mayor of Lazdijai, a small town near the border with Poland, asked its inhabitants not to shop in Poland but in local stores, in order to improve the economic situation of their own town. According to some media sources, he was threating his employees with bonus cuts if they would shop in Poland.

Such appeals have turned out to be completely inefficient, as many Lithuanians still prefer to do their shopping in Poland. They take photos of their receipts from Biedronka, Lidl, Tesco, Kaufland, and other retails stores located in north-eastern Poland, mostly in Suwałki. They praise shopping in Poland on Facebook and on other social media. It is their way to protest against the situation in Lithuania, where prices of food and other products are relatively high, especially compared to salaries. Therefore, many Lithuanians care more about their own domestic budget than about the economic situation in their country.

Over a year ago, a woman from Vilnius took a photo of a receipt for her shopping in Poland, amounting to about EUR50. She wondered how the prices in Poland are significantly lower and wrote: “if the Lithuanian authorities are fine with us supporting Polish economy, then we go there”. The photo became quite popular on the internet and many Lithuanians agreed with this way of thinking, admitting that they shop in Poland or intend to do so. Lithuanians blame their government and the Lithuanian retails stores for too high prices, unaffordable for many citizens.

Although prices of food products have been higher than in Poland for a while now, and many Lithuanians have been going to Poland to do shopping for many years, the difference has increased since January 2015, when Lithuania joined the Eurozone. For governments of the Baltic States adopting the euro appeared to be a guarantee of stronger links to the EU and the West in general, and simultaneously a form of protection from Russia. Estonia adopted the euro in 2011, Latvia in 2014, and Lithuania in 2015. After joining the Eurozone, prices went up.

According to the data provided by Eurostat, the cheapest food products of all the EU countries are in Poland. It is necessary to underscore that differences in prices of food products may appear rather insignificant to Westerners, however, they are very important to Lithuanians. Important enough to make them get into their cars and drive to stores located in Suwałki and other towns near the Polish-Lithuanian border. Slovaks have a similar motivation when they come to Poland to buy food products in towns near the Polish-Slovakian border, such as Nowy Targ or Jabłonka.

There are several explanations why food in Poland is cheap. Probably one of the most important is the fact that Poland is one of the biggest agriculture producers in Europe, with quite low labor costs and a sizeable domestic market. Another important reason is that Poland has not adopted the euro. It is easy to notice that prices increased in the countries that joined the Eurozone. When speaking about situation in Lithuania, it is also noteworthy to emphasize that its market is strongly dominated by one retail chain called Maxima with no significant competition.

Meanwhile, in Poland, several retail chains, such as Biedronka, Lidl, Kaufland, Aldi, Tesco, and many others, wage “price wars”. Numerous price reductions encourage customers to visit stores. It is beneficial for Polish consumers, as well as for visitors from abroad. On top of that stores in towns near the border advertise not only in Polish but also in Lithuanian, Slovakian, German, Czech, or Russian, as not only Lithuanians prefer to shop in Poland.

According to a survey done by Kantar Public (conducted in December 2016) only 11 per cent of Poles think that joining to the Eurozone would be beneficial for Poland, whereas 64 per cent are afraid that it would be disadvantageous to their own economic situation. Even the liberal and euro-enthusiastic Civic Platform did not decide to adopt the euro in Poland, although the party was in power for eight years (2007-2015). No serious political force in Poland really supports the adoption of the euro, so it seems that Poland will remain a shopping destination for Lithuanians, Slovaks, and the citizens of other neighboring countries.

Although the relatively high food prices in Lithuania and Slovakia are caused not only by joining the Eurozone, it is an excellent argument for those advocating against the common currency.

Category: Business 21.11.2018
The price of oil has been rising for the past several months. Historically, there has always been a strong positive correlation between the prices of crude oil and the prices of food. 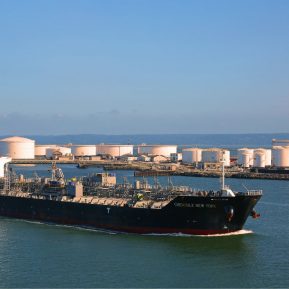