10.03.2014
GDP growth of 3.6 per cent this year and similar results in subsequent years, with low inflation and an improvement in the labor market – this is the scenario predicted in March 2014 by the NBP’s Economic Institute. We are also not in danger of seeing large capital outflows. However, a worsening of the crisis in the East may have repercussions. 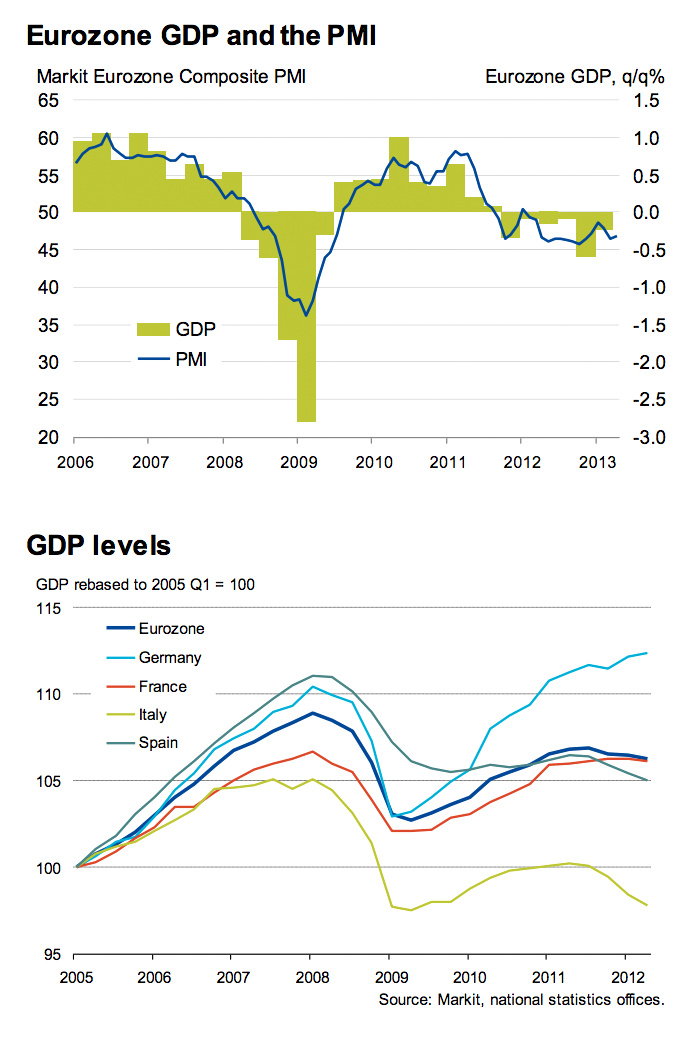 There is no doubt that the Polish economy is speeding up. The previous prediction was the first to revise GDP growth upward. The most recent one presents an even more optimistic outlook. In November 2013, the NECMOD macroeconomic model indicated that GDP would increase by 2.9 per cent in 2014, while today growth is expected to be as high as 3.6 per cent. The prediction for 2015 was improved from 3.3 per cent to 3.7 per cent.

What is interesting is that the higher economic growth rate will go hand-in-hand with lower inflation. The CPI is expected to be at a mere 1.1 per cent in 2014, and next year instead of 1.9 per cent it will reach 1.8 per cent. The Central Bank’s inflation target of 2.5 per cent will not be reached until 2016.

“It is difficult to find threats to scare you with. Everything indicates that the Eurozone is slowly returning to a level of growth that will allow our predictions to come true. Somewhere on the horizon we can see a slight risk of deflation but this will not materialize unless the Eurozone grows at a rate that is slower than currently expected for a number of years (…). The U.S. economy has entered into a growth phase, which is slightly slower than before the crisis, but more balanced. There is talk about threats coming from Asia but the dangers associated with the Chinese financial system are well known, and the anticipated crisis may not take place,” reassures Director General of the NBP Economic Institute, professor Andrzej Sławiński. 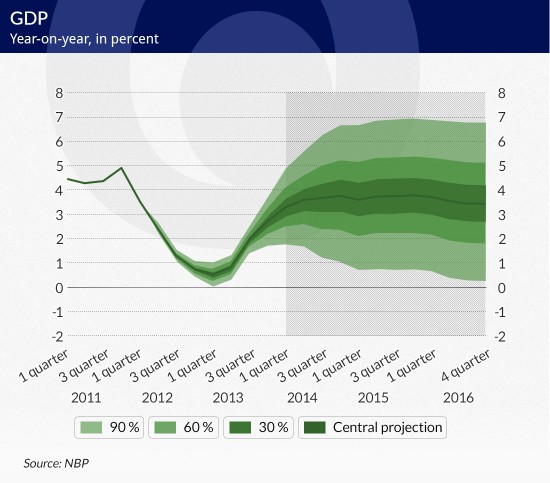 “What’s changed in the growth predictions? We have an improvement in projections for the economies surrounding Poland. At the same time, and most importantly, predictions have improved for the United Kingdom where a return to economic growth has been a pleasant surprise (…). The second region of interest is the Eurozone periphery. Additionally, we have better data coming from the Polish economy. Firstly, better national accounts in H2 2013 – especially national demand – and better than expected LFS (labor force survey) data. It turns out that the labor market is seeing a much faster upturn than during previous swings out of a bearish phase. The złoty also saw a small increase of approximately 1 per cent, compared to the previous growth predictions, while energy prices declined slightly,” commented Jacek Kotłowski, the director of the Bureau of Forecast and Projection at the NBP Economic Institute.

What is interesting is that the increase in GDP growth in H2 2013 was also caused by a rise in national demand. This was the result of a slight increase in consumer demand and a small increase in private investment. Exports remained the driving force behind economic growth although their impact is becoming weaker.

Public investment is also expected to have a beneficial influence on the economy in the short term. EU funding from the current (2007-2013) and the following (2014-2020) tranches is expected to overlap between 2014-2015, and the expected completion of fiscal adjustments means that the budget will not have to be so rigorous.

The most optimistic economic growth indicator is the timely improvement in the labor market. Previous increases in employment arrived some two to three quarters after GDP growth. Now it seems that both indicators are running in parallel.

NBP economists have three theories to explain this phenomenon. First is the popularity of fixed-term contracts which, apart from all their vices, mean that new employees are easier to hire. Secondly, entrepreneurs have started to assume that the worst is behind us in the EU and Polish economies. Thirdly, the Polish economy saw 57 per cent of its total employment in 2013 center on the services sector and that is also where the fastest increase in demand for employment occurred.

“Companies are hiring because they have realized that the wave of redundancies, carried out in fear of the crisis, was excessive,” chief economist at PBP Bank, Ignacy Morawski, comments. “Also, let’s not forget that we have a stable supply of job opportunities. In the previous economic cycle, between the years 2010 and 2011, the number of people who were looking for employment increased rapidly as a result of the termination of pension privileges and the entrance of a large number of graduates onto the market. This is no longer the case, and the economy is growing, so unemployment should decline.”

“One of the signals that indicated this may be the case was the full utilization of productive capacity between 2012 and 2013. This occurred at a time when the Polish economy saw a significant slow-down. Now, when the situation has improved, the demand for labor is appearing quickly,” adds ING Bank Śląski chief economist, Rafał Benecki.

Both economists predict that GDP growth in the next 3 years may see a minimum of 3.6 per cent. It may even be higher. They also agree that inflation will be higher than predicted by the NBP. 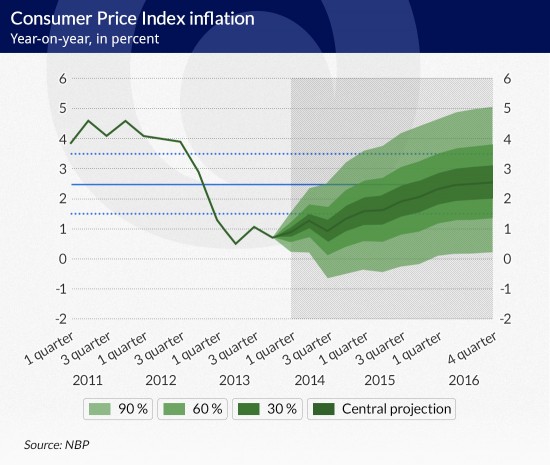 “We will see economic growth of more than 4 per cent as early as next year, which will inevitably bounce inflation up a little. It is possible that it will be similar to the NBP’s expectations, but in that case the situation will require interest rate increases, which the projection does not take into account,” commented Ignacy Morawski.

“My basic scenario assumes that interest rates will increase in November 2014, but if we see a negative economic reaction to the events taking place in the Ukraine, then the increase may not happen until Q1 2015,” Morawski adds.

That is indeed the plan set by the Monetary Policy Council, which announced March 3 – according to its projection, which it already had access to at the time and which is today public – that “rates should remain unchanged in the long term, that is at least until the end of Q3 of the current year.” NBP head Marek Belka admitted that there was even talk of guidance “until the end of the year.”

“This is a justified approach. As opposed to Brazil, Turkey or Russia, Poland can carry out a normal monetary policy. As opposed to the currencies of those countries, the złoty is stable and we do not have to fear inflation pressures from currency rates or the resulting aggressive increases in interest rates,” Rafał Benecki stipulates.

The March inflation report seeks to explain the above phenomenon. The section entitled “The stability of foreign debt” states that the risk of capital outflows, connected with the fact that a large volume of Polish treasury bonds are owned by foreign investors, may occur for a maximum of 20 per cent of treasury bonds, which are indeed used to carry out short-term transactions. However, 80 per cent of Polish bonds are in portfolios belonging to long-term investors.

“The danger of capital flight from Poland is a lot less serious than is generally thought. A large part of our short-term debt is actually not really short-term debt as it is made up of loans allocated by the HQs of international companies to factories located in Poland,” professor Andrzej Sławiński explains.

“As long as the situation surrounding Ukraine doesn’t create really strong shockwaves in the global economy and large asset divestments, investors will behave rationally and differentiate Poland from Turkey to the former’s advantage,” Ignacy Morawski asserts.

It is not strange that after the projection was finalized (February 14), it was Ukraine that took the place of the Eurozone crisis and the emerging markets crisis as the main risk factor for our economic growth. Experts predict that if sanctions are placed against Russia, followed by Moscow retaliating with sanctions of its own, every 10 per cent of Polish exports to Russia may cost our GDP 0.2 percentage points.

The complete Inflation Report is available on the NBP website. 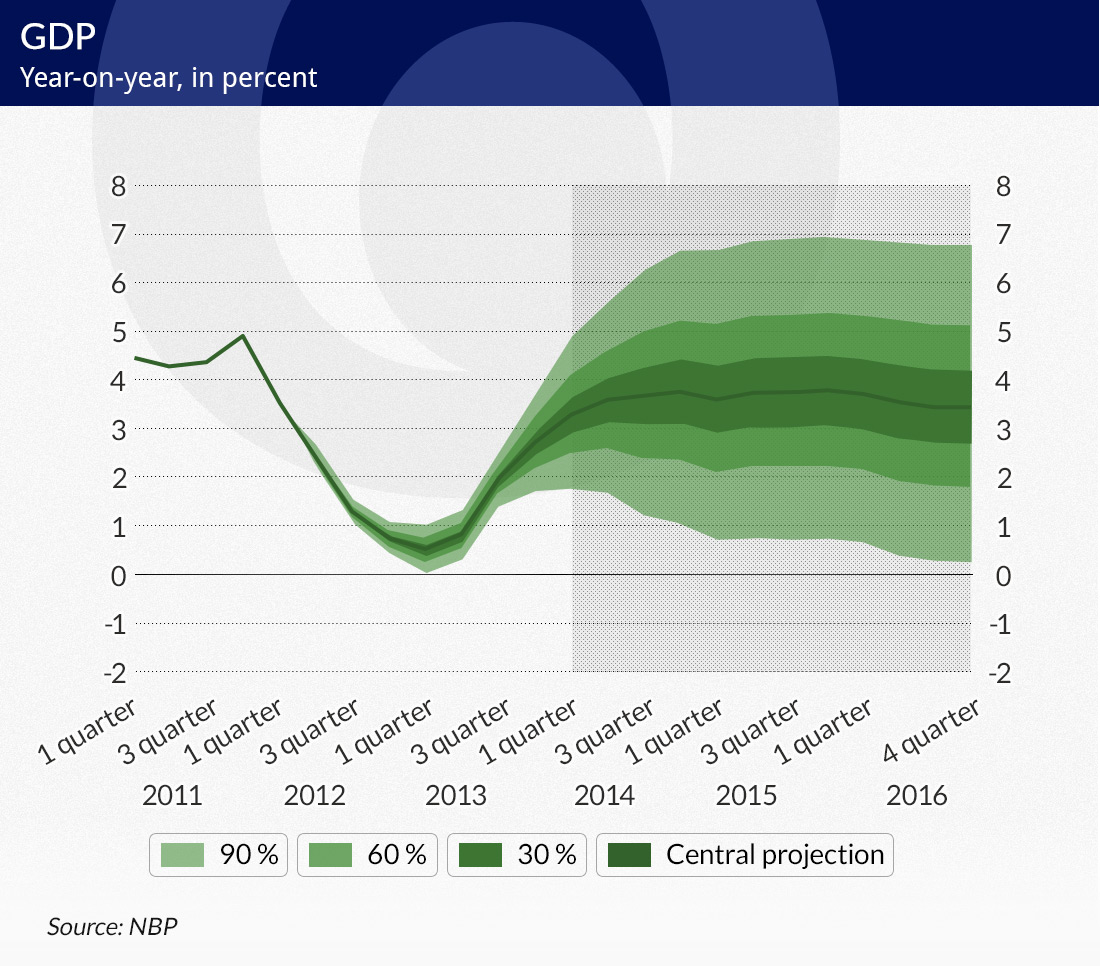 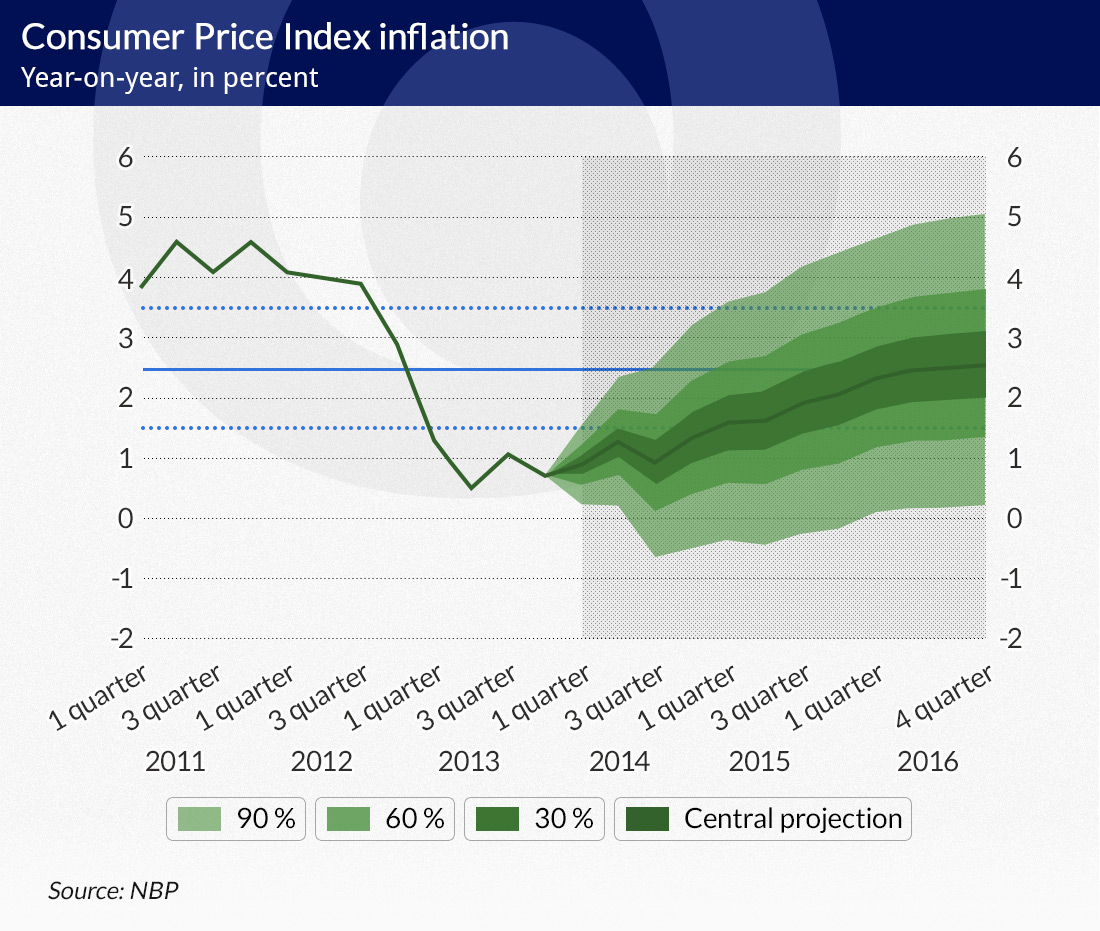