A new wave of Ukrainian migration to Poland

The Ukrainians residing in Poland work really hard, an average of 54 hours per week, and they transfer the majority of the earnings to the families in Ukraine. In 2015, they sent a total of EUR1.1bn.

Poland’s central bank, NBP conducted a study of immigration in the Warsaw metropolitan area. A few years ago Polish employers submitted approximately 200,000 statements of intention to employ a foreigner annually. Since 2014 a dynamic increase has been observed. Approximately 780,000 such statements were submitted in 2015, out of which 760,000 concerned the citizens of Ukraine (in 2014 the figures were 390,000 and 370,000, respectively). 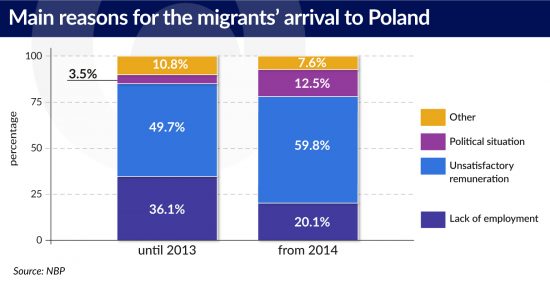 A similar increase was recorded in the number of work permits issued to Ukrainians. Fifty-thousand such permits were issued in 2015, compared with 26,000 in 2014. It is estimated that about a million of Ukrainians worked in Poland throughout 2015 (both legally and illegally). It should be noted, however, that due to the short-term nature of this work, only 500,000 Ukrainian citizens were residing in Poland at any given time.

A new wave of migrants from Ukraine

An important feature of the economic migration from Ukraine is its circular nature, which means that the migrants from Ukraine come and go, i.e. come to Poland for a few months, and then return home. Until 2014, the size of immigration in the subsequent years was shaped by the same group of people who travelled regularly between the two countries.

The study has revealed that the increase in the number of Ukrainians on the Polish labour market is due to the arrival of a new group – migrants, who had never been to Poland before 2014, i.e. before the outbreak of the armed conflict in Crimea. According to the results, this group constitutes up to 41.3 per cent of immigrants from Ukraine. Importantly, the new migrants differ from the other groups not only in terms of previous experience of economic migration, but also in terms of basic demographic characteristics.

One of the differences is a significant increase in a number of men. While they were a minority (32.9 per cent) in the group of experienced migrants who had come to Poland before 2014, their share rose to 57.9 per cent among the newcomers.

The new migrants are also significantly younger. The average age in this group is 33, while in the case of experienced migrants it was 43. Although economic aspects are still the main reason why the Ukrainians are coming to Poland (83.3 per cent), the political and social situation has become increasingly important in recent years. 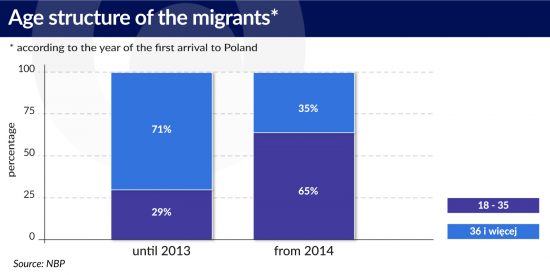 Another noticeable change is the increase in the influx of immigrants from eastern Ukraine, directly affected by the military activities as well as from areas threatened by the spreading of the hostilities. The residents of the eastern part of Ukraine accounted for 28.4 per cent among those  who came to Poland in 2014 or 2015. They only accounted for 6.3 per cent in the group of experienced migrants.

The situation of Ukrainians on the Polish labor market

As much as 93.8 per cent of the respondents are professionally active. While 6.2 per cent remain unemployed, it is a rather temporary state as most of them are actively seeking employment. Casual employment is a common phenomenon among those employed. Almost half of the respondents (47.9 per cent) work in this way, while the other half (45.6 per cent) have a permanent job. Ukrainians running their own business activity only make up a negligible proportion of the migrants (0.3 per cent).

Structure of employment by the sector

The Ukrainians working in the Warsaw metropolitan area are most often employed in the household services (37.6 per cent), in renovation and construction (23.6 per cent) or in agriculture (19.3 per cent). Fewer people are employed in hospitality and catering (total of 12.4 per cent), trade (7.2 per cent) and in industry (4.8 per cent).

When analyzing in greater detail the employment in the households services, we should note that in addition to the simplest jobs, such as cleaning (61.0 per cent), a large portion of workers from Ukraine also began to carry out care work. This mostly includes elderly care (47.7 per cent), child care (16.1 per cent), and care for persons with disabilities and/or chronically ill patients (8.3 per cent). This change is similar to the path of the Polish migrants providing assistance to households in Western Europe.

When comparing the migrants who came to Poland for the first time before 2014 and those who came afterwards, we can notice a significant decline in the share of persons employed in the sector of household services (from 51.3 per cent to 18.3 per cent) and an increased significance of the other sectors, particularly the sector of renovation and construction services (from 15.3 per cent to 35.3 per cent). This is due to the previously mentioned increased participation of men in the group of new migrants, who are finding employment in these sectors.

The average net income of Ukrainian citizens working in the Warsaw metropolitan area is PLN2,105. Foreigners working in the renovation and construction sector have the highest earnings (PLN2,729), while those providing services to households earn the least (PLN1,826).

The average income of migrants is close to the median income in the Polish economy, which – according to data from the Central Statistical Office of Poland – amounted to PLN3,292 gross in 2014 (that is, approx. PLN2,300 net). The obtained results indicate, however, that in order to achieve such an income the migrants have to work much more than the regular working time in Poland. The studied migrants worked 54 hours per week on average, which is almost half as much as  Poles work in a full-time job.

Two-thirds of the migrants (66.4 per cent) report sending money to family in Ukraine. Among those who do not send remittances, however, there is a large group which has savings and plans to return to Ukraine in the future with the saved money (22.5 per cent). The average value of a single transfer is PLN1,793 (the median value is PLN1,500). The range of the transferred amounts is very wide, though. Almost a half of the respondents (45.5 per cent) have recently transferred an amount not exceeding PLN1,000 to their country, while 13.6 per cent have transferred over PLN5,000. The average frequency of the transfers is every 2-3 months.

Based on the obtained results an estimate was prepared, according to which the amount of funds transferred from Poland to Ukraine in 2015 stood at PLN5bn (approx. EUR1bn). According to the study, the largest part of transferred funds is spent on consumption and the improvement of the housing situation (purchase or renovation of apartments).

Students from Ukraine on the Polish labor market

A separate but also significant group of Ukrainian migrants are students, whose numbers at Polish universities have been rapidly increasing. According to data from the Central Statistical Office of Poland, 30,600 students from Ukraine were registered in the universities at the end of September 2015. Their number increased by 30.8 per cent in relation to 2014, and doubled compared with 2013.

Half of them are active in the labor market in addition to studying, and a large proportion is expressing willingness to work (33.6 per cent). When asked about plans for the future they declare that they would like to work in Poland (36.6 per cent) or to maintain at least a partial professional connection to Poland (32.5 per cent). The remaining students are planning to migrate to another country (22.0 per cent), and only a small percentage would like to return to Ukraine (2.4 per cent).

The survey was conducted by Poland’s central bank, NBP in the period August to December 2015, in cooperation with the Centre of Migration Research at the University of Warsaw. The study included 710 adult citizens of Ukraine, who came to Poland for the first time in 1989 or at a later date. The main objective of the study was to obtain information about the structure of the influx of Ukrainian citizens such as: the socio-economic characteristics of the migrants, the patterns of migration and economic integration, as well as the patterns of transfer and the size of remittances.

Iza Chmielewska, Grzegorz Dobroczek and Jan Puzynkiewicz work at the Department of Statistics of NBP. 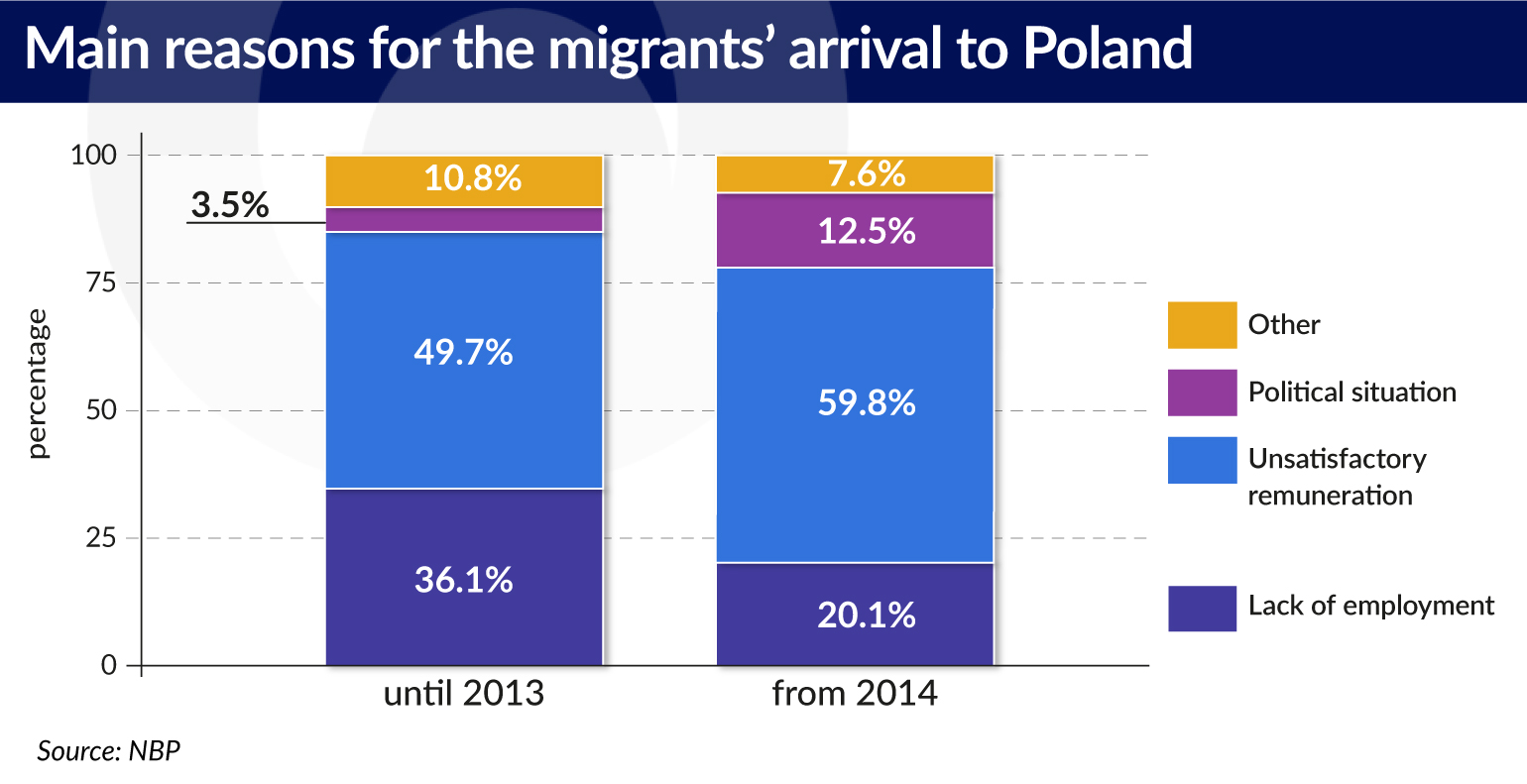