Energy blockade of Crimea reveals shady dealings of the oligarchs

20.12.2015
The blackout caused by the destruction of the power lines connecting the occupied Crimea with mainland Ukraine has shown that Russia has done nothing to invest in the elementary infrastructure of the annexed peninsula. 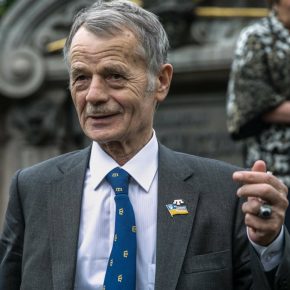 The leader of the Crimean Tatars Mustafa Dzhemilev. (CC By NC MSZ)

The situation that emerged after the Crimean Tartars cut off the electricity supply from mainland Ukraine to Crimea has not only exposed the true state of the energy sectors of Russia, Ukraine and the occupied peninsula. It has also revealed the deeply hidden business interests of oligarchs on both sides of the conflict and the extensive networks of connections between them.

„We are prepared for disruptions of supplies, our own capacities are sufficient to ensure the normal living conditions for the citizens”, the occupation authorities declared whenever opinions were floated in Kiev on the need for Ukraine to cut off the supply of electricity to the Russian-annexed peninsula and for the Ukrainian government to stop supporting the aggressor.

The destruction of all the four power lines connecting Crimea with mainland Ukraine which occurred on November has exposed the reality – Crimea plunged into an almost complete darkness. Russia has not invested in the infrastructure of Crimea, even though according to the Geneva Convention on the Protection of Civilian Persons in Time of War of 1949, the responsibility for ensuring the normal functioning of occupied territories rests with the occupier.

The energy bridge will not help

Crimea’s energy demand is estimated at approximately 1,000 MW (this is what all the electricity customers on the peninsula usually consume), while the forecasts of consumption for 2016 are set at 1,320 MW. The increase in demand is mainly due to the expansion of military infrastructure – under the Russian occupation Crimea is turning into a giant military base – and the associated influx of people. Like many times before in the history of Crimea, Russia is populating it with loyal citizens. Since the beginning of the occupation approx. 100,000 officials, military personnel and their families have arrived on the peninsula. Meanwhile, the power plants existing on the peninsula only produce 350 MW – the rest has thus far been supplied by Ukraine.

The occupation authorities of the peninsula are assuring that supplies of electricity from Russia will begin on December 22nd, 2015 when the first energy bridge linking the coast of Russia with the occupied peninsula will be launched. This is supposed to end (at least partially) Crimea’s energy dependence on mainland Ukraine.

Russian companies were not able to handle the laying of an underwater power cable. In autumn a specialized vessel from China, belonging to the Shanghai Foundation Engineering Group Co Ltd., was carrying out these works. The first cable, however, has a design capacity of 220kV, but in reality it will be able to send less. After the launch of the second line (220kV) scheduled for 2016, the real total transmission capacity of the two lines will reach approx. 330 kV – which is still not enough to improve the situation.  On top of that the cable has to be connected to something, which could prove problematic. The region of Kerch, where the Crimean end of the energy bridge will reach across the Kerch Strait, will still have to be connected with the rest of Crimea and that would require heavy investments in infrastructure.

According to Russian plans, the energy network linking Russia with Crimea is ultimately supposed to consist of a 500-kilometre-long 500kV line connecting the nuclear power plant in Rostov with Taman (the cost of its construction was estimated at RUB21.9bn, a 126-kilometre-long 500kV line connecting Kuban with Taman and 220kV lines Taman (Russia) – Kafa (Feodosia, Autonomous Republic of Crimea) and Taman-Kamish-Burunska (Kerch, Autonomous Republic of Crimea) with a construction cost of RUB18.1bn, as well as a Feodosia – Simferopol 330kV line (planned capacity of 220kV) for RUB1.8bn. The total cost of the works aiming to render the occupied Crimea independent of energy supplies from mainland Ukraine is estimated at RUB47bn.

However, the planned deadline for the commissioning of the energy infrastructure facilities is set for November  2017, and in the case of the line connecting the nuclear plant in Rostov with Kuban – for 2020.

Immediately after the supply of energy to the occupied Crimea was interrupted, the Ukrainian government took actions in order to break the resistance of the Tatars who were trying to ensure that no one repairs the toppled poles and the broken cables. A special unit of the police, armed to the teeth and headed by one of the officers who had taken part in last year’s pacification of the Kiev Maidan, was sent against the blockaders. When the attempt to resolve the issue by force failed, the Ministry of Energy began to argue that because of the unfulfilled contract for supplies, Ukraine would have to pay huge penalties, the fields along the border between the Kherson Oblast and Crimea would not be irrigated, homes would be deprived of electricity, and finally, a disaster was imminent in the nuclear power plant in Zaporizhia, which was supplying electricity to Crimea. According to the Ministry, there was only one remedy for these plagues: resuming supplies to the occupied territory as soon as possible.

Neither the ministry nor its subordinate departments explained why the irrigation system couldn’t be supplied from the substations located in the continental part of Ukraine. Despite the alarming announcements, no one shut off the electricity in the houses of the residents of the regions adjacent to Crimea, whereas the nuclear power plant simply – as usual when there is no demand for energy – reduced production.

The contract for the supply of energy from Ukraine to Crimea pushed through by the Ministry of Energy and signed in an atmosphere of scandal in December 2014, defines the occupied peninsula in accordance with the Russian terminology as the Crimean Federal District. The critics accuse the government that the contract not only recognizes Russia’s annexation of Crimea, but it is also extremely unfavorable financially – pursuant to this agreement Ukraine sells energy to the occupier below market prices. Economic benefits are only reaped by the intermediaries operating in Crimea, while the Kremlin benefits politically.

The situation is even more interesting with regard to contractual penalties. In accordance with the contract the Ukrainian side should pay approx. USD160,000 in penalties for each day of interruption in supplies. Meanwhile, the daily cost of running the 13 mobile power plants brought in to Crimea by Russia in order to improve the energy situation is approx. USD1mn per day. Even assuming that Ukraine pays the contractual penalties, the blockade is generating losses of millions of dollars for Russia, only on account of having to run the mobile power plants. Considering the total suspension of industrial activities on the occupied peninsula and the difficulties for the Russian military infrastructure, it is clear that Ukraine not only isn’t losing, but it is immensely benefiting on the blockade.

Enormous costs are borne by Russia and by … the business environment of the Ukrainian President and oligarch, Petro Poroshenko. According to Andriy Levus, the head of Ukraine’s parliamentary sub-committee for national security, the Ukrainian government’s nervous reaction to the civic energy blockade is dictated by the interests of the Russian oligarchs associated with the Ukrainian President, Konstantin Grigorishin and Alexander Babakov, who control Krymenergo and Sevastopolenergo, i.e. the main energy companies on the peninsula, and who make huge profits from the contracts for the supply of Ukrainian energy to Crimea. „Under the lack of transparency and supervision, as well as semi-legal mechanisms prevailing in Ukraine, supplying electricity to the occupied Crimea has become a profitable business. Nearly 12 percent of shares in Krymenergo belong to Grigorishin’s Garensia Enterprises Limited. After the so-called nationalization of Krymenergo, Grigorishin has actually obtained complete control over the company, while Babakov still controls Sevastopolenergo”, wrote Levus on his blog.

“On the part of the government, this business is supported by the lobbying efforts of the Minister of Energy Volodymyr Demchyshyn and the Vice-President of Ukrenergo Yuriy Kasich. They both have ties with Grigorishin. While working in the Investment Capital Ukraine company which serviced Poroshenko’s investments, Demchyshyn supported the Russian oligarch’s acquisition of one of the energy companies in Lugansk, whereas Kasich spent several years working as a manager in Grigorishin’s companies,” argues MP Andriy Levus.

„In addition, Grigorishin has a huge influence on the state enterprise „Energorynok” and the National Commission for State Regulation of Energy and Public Utilities. Babakov and Grigorishin are controlling 19 regional energy companies. This is a genuine economic occupation. This is also why the idea of the energy blockade of Crimea and the Donbass is met with the furious resistance of the officials and politicians. It’s all about the large amounts of money in return for which the officials bought by Grigorishin have already recognized the occupied Crimea as a Russian Federal District,” comments the head of the parliamentary sub-committee for national security.

Reports about Petro Poroshenko and Konstantin Grigorishin’s business partnership, which goes as far back as 2005, have been presented by Radio Svoboda earlier this summer. Poroshenko was supposed to help his Russian colleague in his businesses in the Ukrainian energy sector during the presidency of Viktor Yushchenko, when he served as the Secretary of the National Security and Defence Council.

„Poroshenko and Grigorishin are business partners. Among other things, they are co-owners of the Kiev Company, which leases 6.4 hectares of land in the very center of Kiev – right next to the Kiev Pechersk Lavra. Up there even the Kiev office of Grigorishin’s Energy Standard Group is located together with the International Investment Bank, which belongs to Poroshenko,” informed Radio Svoboda.

The blockade also causes millions of dollars in losses to one of Poroshenko’s other business partners – the oligarch Dmitry Firtash, who is currently in Vienna awaiting the final decision of the Austrian Justice Department on his extradition to the United States (the United States Attorney’s Office  accuses him of corruption). During his defense before the court, the oligarch revealed that he had made an agreement with Petro Poroshenko prior to last year’s presidential election. As a result, a protégé of Firtash, the boxing champion Vitali Klitschko – who was seen as one of the favorites in the last year’s Ukrainian presidential election – withdrew his candidacy and announced his support for Poroshenko.

Volodymyr Demchyshyn didn’t even try to hide from the Russian media that the business interests of Dmitry Firtash were among the reasons behind the pressure exerted on the participants of the blockade. He stated that the destruction of the power line pylons in the Kherson Oblast led to problems with the supply of electricity to Ukrainian customers and put hazardous production companies at risk. “There is a threat to specific enterprises, in particular in the chemical industry,” he told the Russian news agency TASS.

The only chemical plant in this region is the Crimean Titanium in Armiansk, just across the border between the occupied Crimea and the Kherson Oblast – the largest titanium dioxide manufacturer in Eastern Europe. It officially belongs to Ostchem Germany GmbH, a company registered in Germany and owned by Firtash. In reality Firtash controls the plant through his Russian company Titanium Investments, to which he leased it in the fall of 2014. In reality, therefore, a representative of the Ukrainian government was defending the interests of a German company paying taxes to the budget of the Russian occupier, as well as the oligarch’s bank account. This demonstrates that in the conflict between the private interests of oligarchs and Ukraine’s sovereignty the former seem to be winning.

The German government has also extended a helping hand to the occupiers of Crimea affected by the energy blockade. The Ministry of Foreign Affairs of that country demanded that Ukraine immediately resume supplies. The commentators in Kiev conclude that this is a continuation of the policies of Chancellor Angela Merkel, who recently stated in public that Ukraine had to settle for „sovereignty without Crimea”. 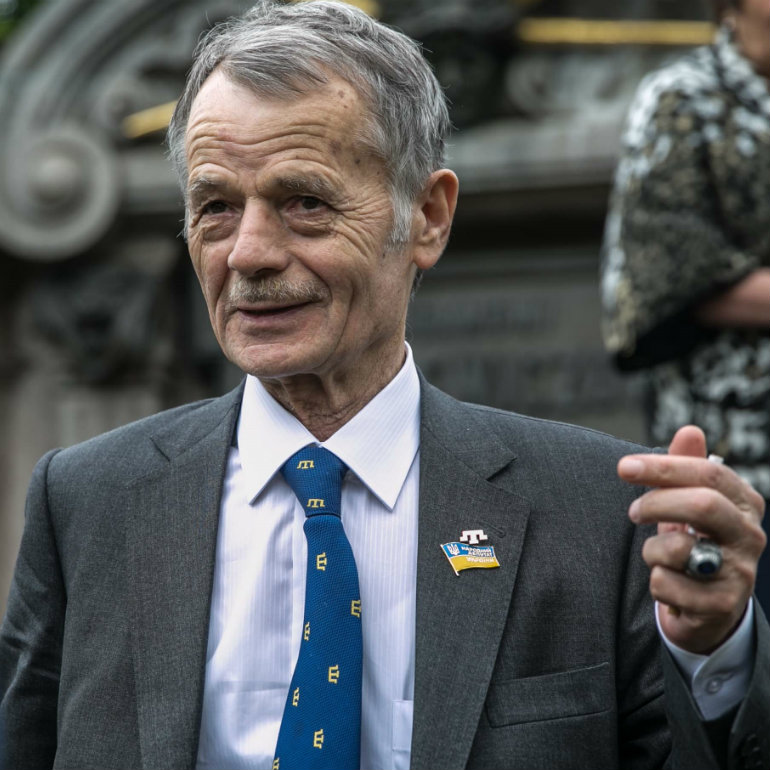 The leader of the Crimean Tatars Mustafa Dzhemilev. (CC By NC MSZ)