14.12.2020
Poles want to know more about finance, are aware of the gaps in their economic education and can point out its benefits. These are the findings of a recent study commissioned by NBP. 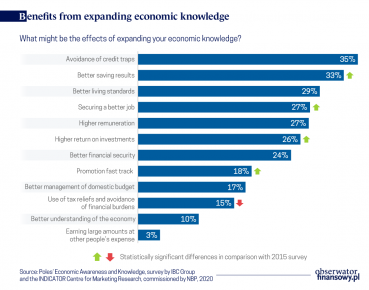 More than 80 per cent of Poland’s adult population believes that economic education is important or very important. Only one in eight respondents considers it insignificant. Compared to the 2015 study, the share of respondents recognizing the need for further financial education has increased slightly.

The “Survey of Poles’ Economic Awareness and Knowledge” was commissioned by the Department of Education and Publishing of Narodowy Bank Polski from the IBC Group and the INDICATOR Centre for Marketing Research. The aim of the project was to diagnose the level of Poles’ knowledge of economics and the economy and to identify areas of true educational needs in this respect. Similar research was conducted in 2015 and 2012.

Poles perceive a range of benefits to expanding their economic knowledge. The most important of those are the ability to avoid credit traps and to save more effectively. Respondents also believe that greater economic knowledge may help raise their living standards, find a better job, negotiate a higher salary, speed up promotion as well as allow them to feel more secure financially, achieve better investment results and manage the domestic budget more efficiently.

One in seven of those surveyed believed that greater economic knowledge helped take advantage of tax exemptions more effectively and avoid excessive financial burdens. 10 per cent stated that enhanced knowledge allowed one to have a better understanding of economic developments. 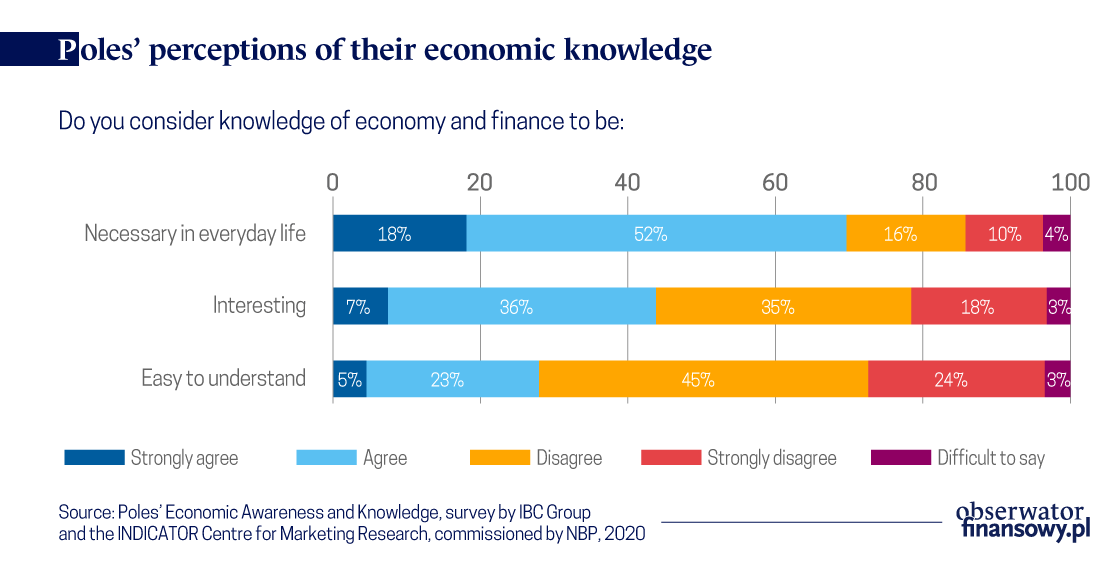 The above data are consistent with the respondents’ perceptions of economic knowledge: 70 per cent of them believe that it is necessary in everyday life, 26 per cent are of the opposite opinion. At the same time, only 43 per cent find economic knowledge interesting (53 per cent hold the opposite view) and barely 28 per cent find it easy to understand (69 per cent think the opposite). In other words, while Poles appreciate the importance of economic issues, they are afraid that they might find  them difficult to understand. There is room for action here for institutions responsible for financial education: it is essential to present economic issues in an attractive form, one helping to understand them better and adding to the appetite for learning more.

The study confirms that young people enter the world of finance at a younger age and with more courage (albeit using fewer financial products than older Poles).

Compared to 2015, there is a statistically significant increase in the financial inclusion of Poles. 8 per cent of the respondents declare holding five or more financial products (up from 3 per cent), 72 per cent from two to four products (up from 69 per cent), and 19 per cent have one or no product (down from 28 per cent). The most frequently indicated financial products or services are: a personal current account (ROR), a debit card and a savings account. 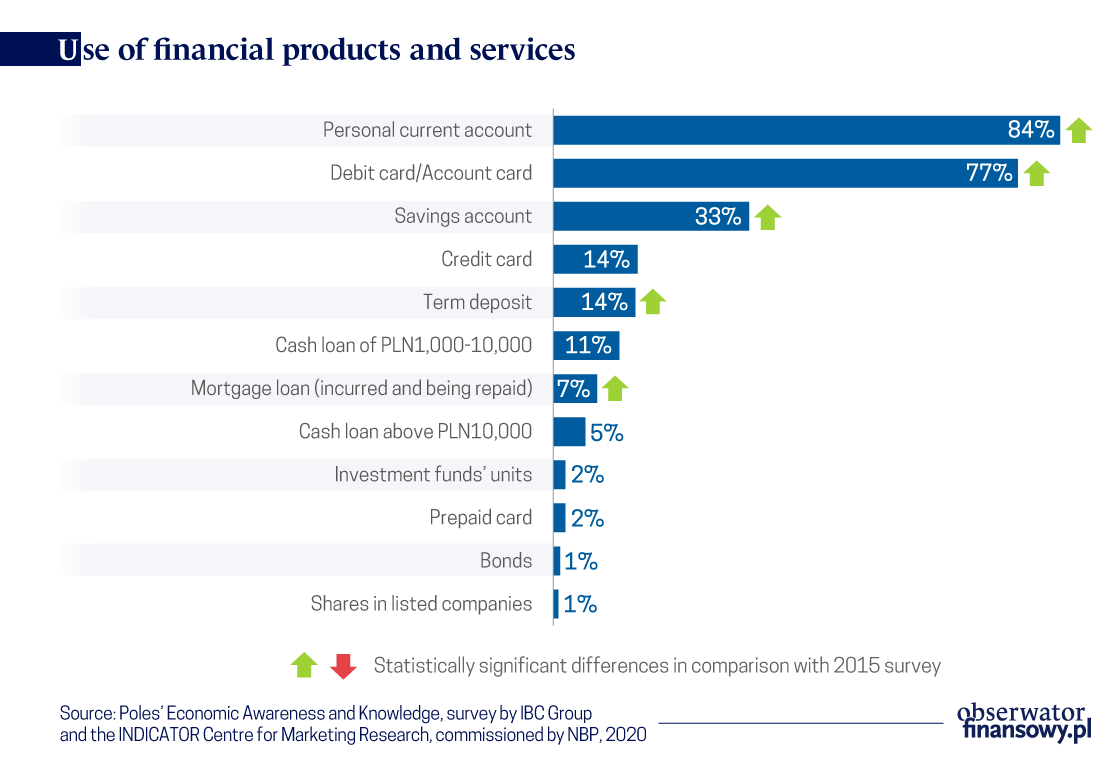 How do Poles get learn about finance? The most frequently mentioned source of information is the respondents’ own experience (43 per cent, 16 percentage points up on the 2015 figure and 31 percentage points up on 2012). Other sources include the internet and television (29 per cent and 28 per cent, respectively), but their importance is decreasing. More respondents point to people they interact with: friends, neighbours and family as well as bank employees (26 per cent and 14 per cent, respectively). 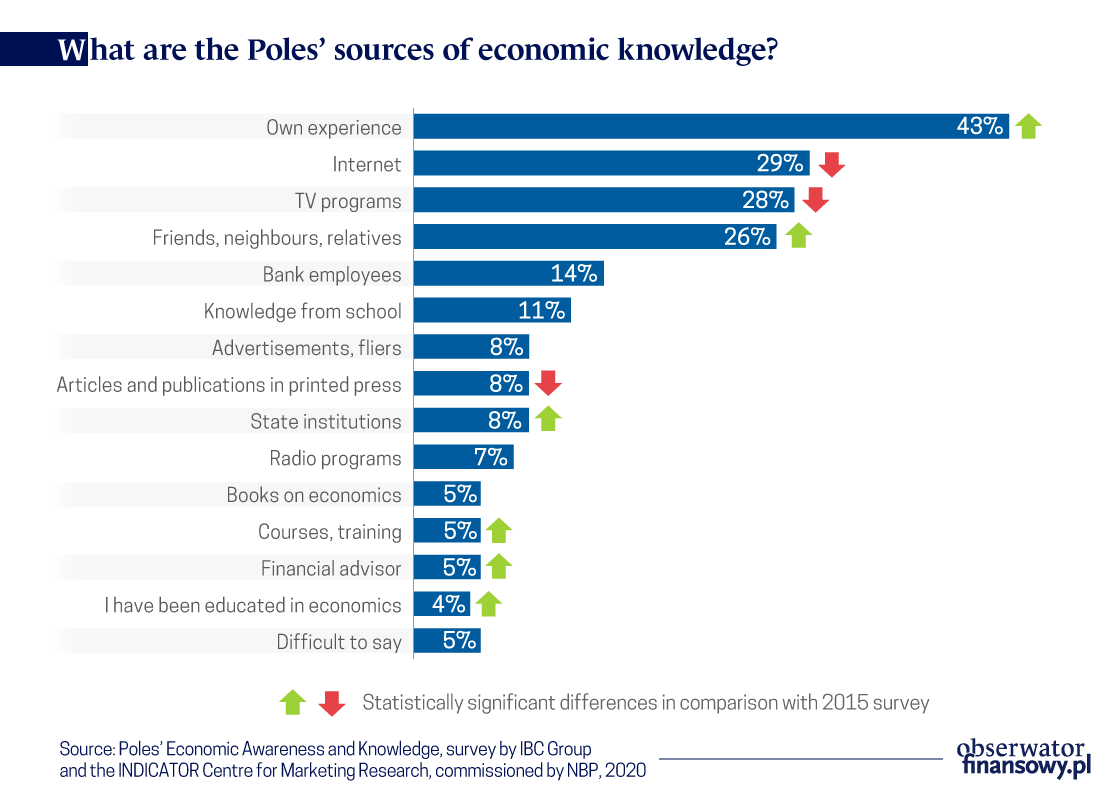 According to the respondents, state institutions play a relatively small role in disseminating economic knowledge (8 per cent), although their importance has increased slightly, as has the role of courses and training.

And where would Poles like to learn about finance? The preferred source of knowledge is the internet (31 per cent), but also TV shows (25 per cent), state institutions and school (11 per cent each). Financial advisers have had a relatively small role to play so far – only 6 per cent of the respondents rely on their assistance.

The respondents provided a self-assessment of their economic knowledge, which turns out to be quite limited. Only 8 per cent of Poles believe they know a lot about economics; compared to the 2015 figure, this percentage has increased. There are also more people rating their knowledge as average. However, there are significantly fewer people who assess their knowledge as rather small. Interestingly, in the current survey, not a single person has rated their knowledge as very advanced.

In recent years the level of economic knowledge of Poles has increased.

An objective assessment of the level of Poles’ economic knowledge has also been conducted, based on the respondents’ answers to a number of questions on micro- and macroeconomic issues. The results show that the level of economic knowledge of Poles has increased. In this year’s survey there are significantly more participants with a high knowledge index, and fewer with a medium index.

Poles answered correctly 24 out of 41 questions in the economic knowledge test. Assuming this as a benchmark, 14 per cent manifest a low and very low level of knowledge, 33 per cent an average level, while 52 per cent can boast a high or very high level of economic knowledge. It should be noted, however, that within this latter group, only 7 per cent achieved a very high knowledge index (33 or more correct answers). In the context of low self-assessment scores, the relatively good results of the test of objective knowledge may be encouraging.

When summing up the report, the authors point out the important relations between the level of knowledge and various factors – demographic, economic, technological ones, etc. The level of economic knowledge depends very strongly on the education of the respondents – the higher the education, the better the self-assessment of this knowledge, and the higher the objective knowledge index. Age also matters – the youngest (under 24) and the oldest (over 55) respondents have significantly less knowledge. Persons aged 25-54 and those economically active know more about finance.

Those who in childhood talked to their parents about financial matters, attended classes devoted to the subject at school or elsewhere are also better at grasping the world of economics. In turn, those who have a better assessment of their knowledge and obtain higher grades in the test, are more aware of the need for and usefulness of economics in everyday life.

Most Poles see the importance of economic knowledge and want to expand it.

“Taking into account the educational mission of NBP, one can be pleased that most Poles recognize the importance of and need for economic knowledge in everyday life and want to broaden it,” says Anna Kasprzyszak, Director of the Education and Publishing Department of NBP. “At the same time, there is a long-standing conviction that economics is difficult and boring. This is confirmed, among other things, by the gap between the self-assessment of economic knowledge by Poles and its actual level, as registered by the study. Through its educational activity, Narodowy Bank Polski strives to present economic issues in an accessible and attractive form, taking into account the individual needs of recipients,” she adds. 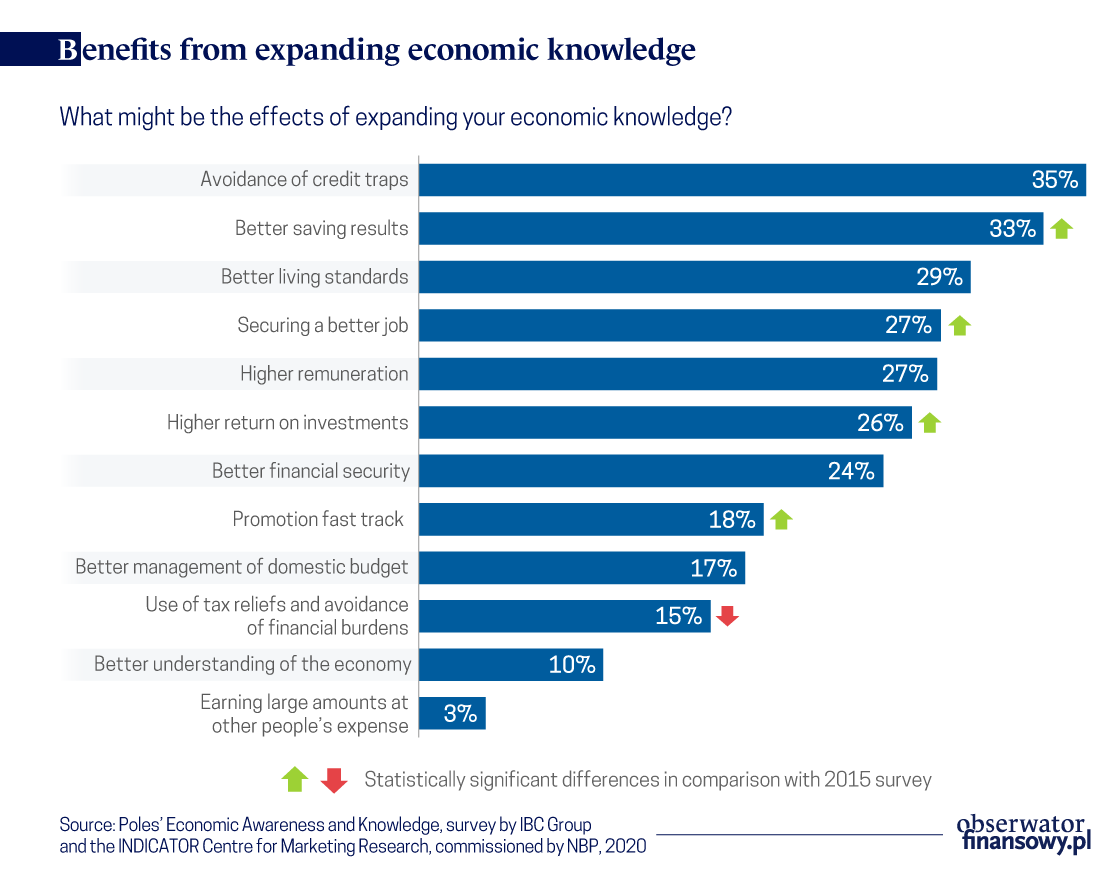