17.11.2020
The influx of economic immigrants to Poland in recent years is a phenomenon which has no precedent in the modern history of Poland, and which could be a signal of important changes taking place in the other countries of Central and Southeast Europe.

For many decades, Poland was a country of negative net migration. Significantly higher numbers of people were emigrating from Poland than coming in from other countries. In the period after Poland’s accession to the European Union (EU), the Polish emigrants were mainly motivated by the better earning opportunities and a higher quality of life abroad. However, before that, during the days of the Polish People’s Republic and World War II, people were leaving Poland for political reasons or to escape dangerous conditions. At the same time, up until the beginning of the current decade, Polish companies generally did not have any problem with finding new workers. Besides, the number of Polish people in the so-called working age (18-65 years) was steadily increasing from the end of World War II until 2012. Numerous age groups born in the early 1980s were beginning their professional careers in the early 21st century, when the overall unemployment rate reached 20 per cent and exceeded 40 per cent among young people, while large groups of people with higher education would be willing to accept any job offer whatsoever.

The unemployment rate peaked in 2002, and then fell by almost 13 percentage points over the course of 6 years. This was supported by a wave of emigration following Poland’s accession to the EU. Young people were initially leaving the country for short periods of time, running away from unemployment, and looking for opportunities to earn and save up some money. However, due to the passage of time and the burdens associated with circulating between Poland and the given EU member state (usually the United Kingdom, Germany or Ireland), more and more Polish citizens started planning their future life outside their homeland. According to the estimates of the Statistics Poland, in 2018, there were approximately 2.5 million Polish citizens living outside Poland.

In terms of demographic changes, the period after 2010 has been clearly different from what Poland has been accustomed to. Firstly, its demography no longer supports economic growth, as it happened in previous decades. The number of people aged 18-65 years, who are the most active on the labor market, has been decreasing at an accelerating rate since 2012. Secondly, due to the increasing improvement of the economic situation, the unemployment rate has dropped to one of the lowest levels in the EU, and Polish employers had to face problems which were almost entirely absent in the past, such as the shortage of workers, the need to invest in training, and the struggle to keep the best employees in the company. Thirdly, starting in 2014, growing numbers of migrant workers started coming to Poland from Ukraine, and in recent years the Polish labor market has become attractive for migrants from Belarus and even Asia.

Although official statistics do not register a large portion of the migratory flows, even these data show the unprecedented scale of changes occurring in the last decade. Over the course of just a few years Poland transitioned form a country of net emigration to a country in which the influx of immigrants more than makes up for the decreasing emigration of local citizens. This favorable turn of events has greatly mitigated the labor shortages on the Polish labor market associated with the falling unemployment rate. This has contributed to the sustained growth of the Polish economy in recent years, but also has prevented the emergence of excessive and potentially inflationary tensions in the economy.

The main reason for the arrivals of Ukrainian immigrants to Poland were economic considerations. Although the main catalyst for the current migratory flows from Ukraine to Poland was the military conflict and some of the young people actually came to Poland out of fear for their safety, the vast majority of the migrants were motivated by the desire to improve their livelihood, that is, the differences in wage levels between Poland and Ukraine and the unemployment caused by the economic crisis in Ukraine. The motivations of Ukrainian immigrants are therefore similar to those of Polish migrant workers heading for the West a decade earlier. There are more similarities, though.

The studies of Poland’s central bank, Narodowy Bank Polski (NBP) show that when it comes to money remittances sent to their families in Ukraine, the behavior of Ukrainian economic migrants is similar to that exhibited by Polish migrants 10 years ago. The initial waves of immigrants came to a country which they knew relatively little about. As a result, they needed some time in order to settle in the new labor market. At present the dominant group among immigrants from Ukraine are people arriving with a clear goal — to earn and send money back to their homeland. It is precisely such workers who frequently circulate between Poland and Ukraine and who accept such a model of life, at least for the time being. However, we can also see an increasing number of immigrants who want to stay in Poland for longer and who are coming with their families. Just like in the case of Polish migrants in the United Kingdom or Ireland, the amount of money that these people are sending money back to Ukraine is gradually decreasing.

It seems that just like the Poles in Western Europe, the immigrants living in Poland will increasingly seek to permanently settle down in the country to which they emigrated. In the case of Poles living in the United Kingdom even the changes in regulations brought about by Brexit haven’t led to a mass wave of return migration, although the number of people declaring that they wanted to stay abroad permanently started to decline. In the case of workers from Ukraine, the temporary nature of their immigration is often associated with the legal residence requirements. However, also in this case we can see changes. In 2019, the planned lengths of stay declared by the immigrants are longer than those declared in surveys carried out 4 years ago. It can therefore be assumed that in the event of possible restrictions of migratory flows between Poland and Ukraine in connection with COVID-19 ambitious young people will continue to seek opportunities to stay and work in Poland.

Another similarity in the situation of Poland and Ukraine is also the age structure of the population. Just like Poland, Ukraine is facing increasing problems associated with the aging of the local population, which have been compounded by emigration. In the past, the main directions for emigrants included Russia and Western Europe, and currently their main destination is Poland. The pool of Ukrainian people in the so-called mobile age, who most frequently decide to go abroad for work, is decreasing. This means that regardless of the changes in the economic situation, the number of new immigrants coming to Poland from this direction will be falling.

Because the rate of immigration from Ukraine is likely to decrease in the future, the issue of dwindling labor resources will return sooner or later and Poland’s economic policy will have to address this problem. At this point, it’s worth beginning a discussion concerning the possible remedies: is the Polish state prepared to actively encourage immigration and to integrate immigrants from other directions? Can Poland do more to increase the rate of economic activity among its own citizens? Or maybe the size of the domestic labor resources would become significantly less important if the model of economy based on relatively labor-intensive industries was transformed towards greater use of capital and innovation? Similar questions will have to be faced by the national governments across the entire region, including Ukraine. 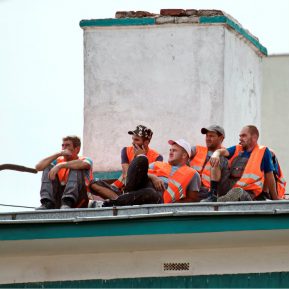