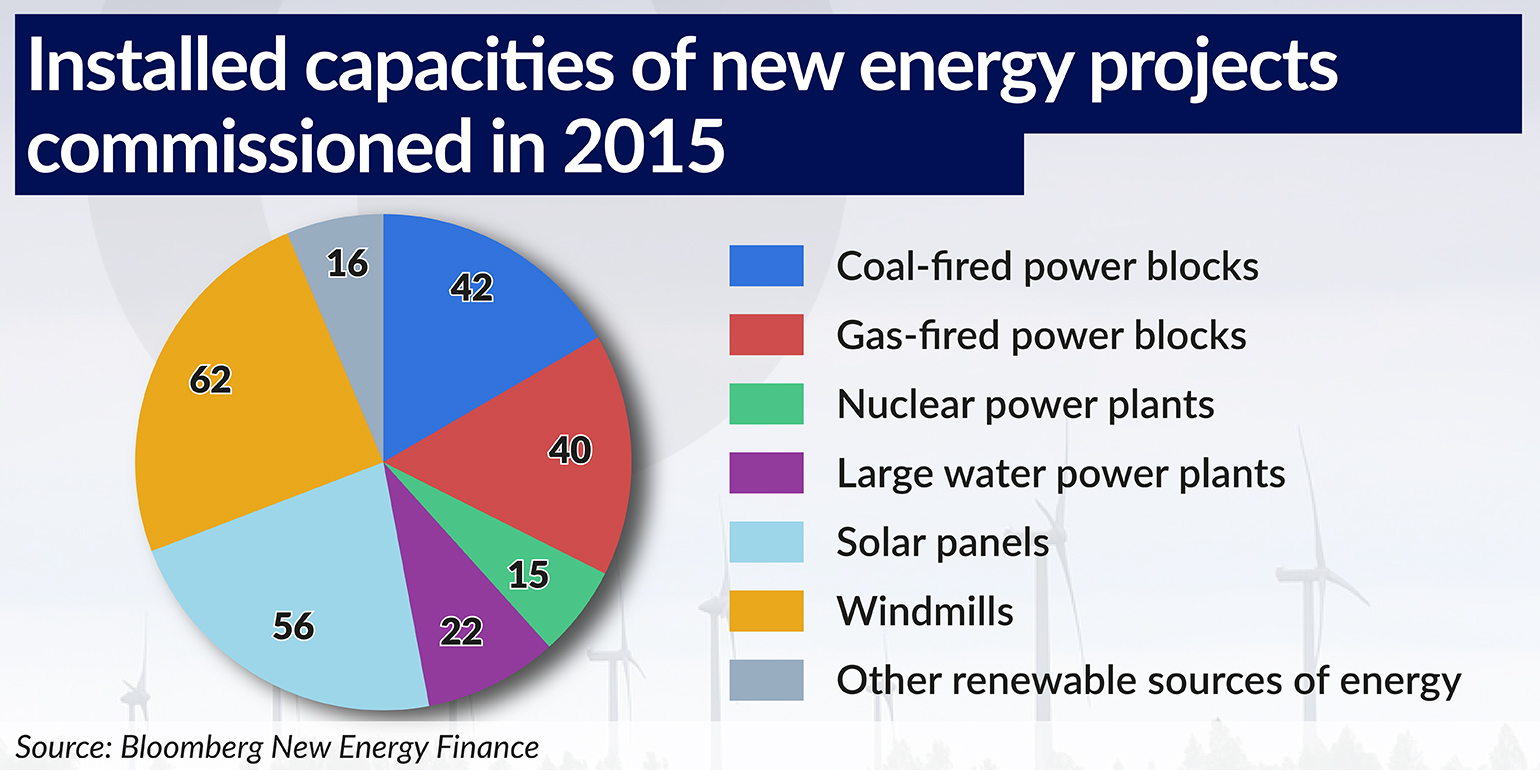 The record amount of investments translates into 134 GW of power capacity from the newly commissioned renewable sources (including 62 GW from wind power plants and 56 GW from solar projects), whereas two years earlier ‒ when a total of USD234bn was spent ‒ the newly installed capacities reached 87 GW. Renewable energy sources, with the exception of water power plants with a capacity above 50 MW, had an almost 54 per cent share in the total installed capacities, and for the first time represented more than half of the newly installed gigawatts.

Last year’s record spending included more than USD10bn invested in the development of technology, including in companies (mainly start-ups), nearly USD15bn invested in plants producing renewable energy, USD199bn spent on projects related to newly installed capacities (including USD8bn from the reinvestment of previously spent funds) and USD67bn spent on smaller projects (mostly local or household photovoltaic projects with a capacity of up to 1 MW) and others, whose value was not made public.

Peak investments in Europe are already behind us

Long-term data presented in the report indicates that in Europe peak investments in renewable energy sources are already behind us. For several years expenditures in the United States have oscillated around USD40bn, and in China they are continuing to grow (in the years 2004-2015 by an average of 38 per cent per year). Countries of the Middle East and Africa as well as India are also fast-growing markets of renewable energy.

Europe invested the bulk of its spending on renewable energy sources at a time when windmills or solar panels were much more expensive than today. Meanwhile, China began massive investments once the prices had fallen. It is clear from Eurostat data that in countries where the share of energy from renewable sources (excluding water power plants) is high ‒ e.g. in Germany and Denmark ‒ the retail prices of electricity for individual consumers are the highest, and the taxes and charges associated, among others, with financial support for investments in renewable energy sources, are a major component of these prices.

There are many factors behind the decrease in spending in Europe, which has continued since 2011. They include reduced costs of purchase of solar panels, phasing out of special government projects, and retroactive cuts in the previously granted subsidies in Spain and Romania, as well as political decisions associated with the concerns of governments regarding the social and business impact of rising electricity prices.

Many indications show that there will be no significant increase in expenditures on renewable energy sources in Europe in the foreseeable future. The level of investments in the United Kingdom ‒ which in 2015 accounted for half of all spending on renewable energy sources in Europe ‒ will be affected by the fact that the existing rules of support for investments will expire in 2017, and it is not known whether they will be extended, and on what terms. On the other hand in Germany the next auction of energy from renewable sources is planned for 2017, which is associated with investors’ uncertainty about price levels. 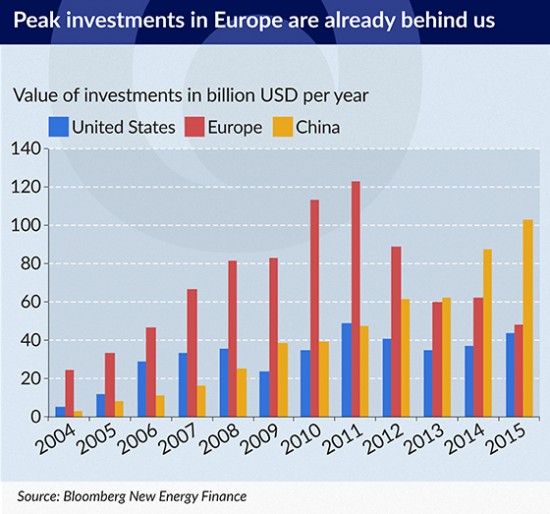 No wind in Poland

The instability of the legal environment, which is seen, among others, in Poland, is not conducive to new projects either. The current government postponed for half a year ‒ until July 1st, 2016 ‒ the entry into force of prosumer’s provisions essential for the profitability of investments which were included in the amendment to the Law on Renewable Energy Sources adopted in 2015. After that the government announced it was preparing another amendment and it wants to clearly differentiate between support for those who intend to produce energy in micro installations (with a capacity of up to 10 kW) only for their own use, and those who also want to profit from that. The draft legislation introduced by members of the ruling party, setting out the rules for the construction and use of windmills, which includes, among others, severe restrictions on the distances of wind farms from buildings, is also raising concerns about the future of wind energy in Poland.

No changes in the United States and a boom in Japan

The relatively stable capital expenditures in the United States are the effect of maintained government support, including tax incentives, for investments in renewable energy sources. According to the calculations of Bloomberg New Energy Finance, the extension of subsidies until 2019 will generate investments for a total of approx. USD73bn. Further investments in the installation of solar panels by households, which are supported by tax breaks and state-level support schemes for such investments, are expected in the next five years.

On the other hand, investments in Japan are growing. This is a direct effect of the 2011 nuclear power plant failure in Fukushima. In 2015 investments in renewable energy sources reached USD36.3bn, that is roughly the same as the year before, of which USD31.7bn (47 per cent of the global outlays) was invested in solar panels on the roofs of houses. Investments are supported by the government. Since 2012 it has been subsidizing the installation of lithium-ion batteries in homes and small businesses, which store electricity produced by the panels.

In the years 2004-2015 global expenditures on investments in renewable energy sources amounted to a total of USD2.3 trillion. In spite of the constant growth in recent years, the share of renewable energy sources (excluding large water power plants) in the production of electricity and the installed capacities is still small. In 2015 it increased to 10.3 per cent and 16.2 per cent, respectively, giving a y/y increase of 1.2 and 1.0 percentage points. The difference between the installed capacity and the power production is, among others, a reflection of the fact that neither solar panels nor windmills produce energy all the time.

The „Global trends in renewable energy investment 2016” report makes it clear that the energy industry based on fossil fuels still has a long life ahead of it. The average age of a coal-fired power plant is 23 years, and the lifespan of such investments is 40 years. One additional argument for maintaining coal plants is the cost of energy production, which is still lower than most of the projects based on renewable energy sources. The cost reduction is driven by low coal prices.

The forecasts of Bloomberg New Energy Finance show that the rate of growth of the installed capacity of coal-fired power plants will be declining. This is a result of efforts aiming to limit CO2 emissions. One good example is China, where this year the government ordered the suspension of construction of thermal power plants in 15 provinces on the grounds of a surplus capacity in the energy system and the reduction of greenhouse gas emissions.

The technology is becoming cheaper

Experts are convinced that the costs of investment in solar panels and wind farms will continue to decline. These predictions are based on the falling production costs due to the development of technology and the increase in the efficiency of the devices themselves. Forecasts indicate that over the next 10 years the price of solar panels will be reduced by half.

The decrease in necessary investment expenditures directly translates into the costs of energy production. While in the third quarter of 2009 the production of 1 MWh of energy through solar panels cost an average of USD315, in 2015 it was already USD122. It should be noted, however, that the costs of energy production in newly completed major projects are falling clearly below the average. An installation in Dubai with a capacity of 200 MW is selling electricity for USD58.5 per 1 MWh, while Indian installations in the Rajasthan and Andhra Pradesh states have prices of USD64 and USD68, respectively.

The average cost of electricity production in onshore and offshore wind farms is also decreasing. In the last six years, it fell by 14 per cent, to about USD83 per 1 MWh at the end of 2015 (onshore farms), and ten-year projections suggest a decrease by another 18 per cent. In the case of offshore farms it is expected that the average cost of 1 MWh will fall from USD176 in 2015 to USD122 in 2020.

The costs of electricity production by solar panels and windmills are still higher than in the case of coal-based energy production and exceed market energy prices. The profitability of these projects is a result of tax exemptions and subsidies for Renewable Energy Sources. In the case of developing countries the growth of the energy sector based on renewable energy sources is often the only way to ensure access to electricity for consumers (1.3 billion people across the world still do not have access to electricity), and sometimes also for the industry (e.g. some of Chilean copper mines use renewable energy sources, because it is not worth building transmission lines to them).

The main source of financing of large investments in capacities from renewable energy sources is debt, including primarily loans granted by consortia of banks. This is usually 60-80 per cent of the value of the project. In recent years debt has become cheaper, which improved the investment efficiency. In 2015 European bonds issued in connection with investments in renewable energy sources had an interest rate about 2 percentage points lower than in 2012. In the United States, short-term securities issued to finance the construction of medium-sized projects had a yield of 2.5-3.0 per cent.

The largest European bond issue in 2015 had a value of EUR978m. It was associated with the refinancing of debt incurred for the construction of an offshore wind farm in Germany. It was conducted by the private equity firm Blackstone. The issue of bonds of Global Infrastructure Partners for the acquisition of a 50 per cent stake in another wind farm located on the German North Sea was worth EUR556m. The ten-year bonds were mainly bought by German insurance companies. A year before, Danish pension funds invested EUR600m in a 50 per cent stake in a similar wind project.

Entities which are active in lending money for investments in renewable energy sources include specialized financial institutions ‒ the European Investment Bank, the German KfW, the European Bank for Reconstruction and Development, the World Bank, the Brazilian Banco Nacional de Desenvolvimento Economico e Social and the China Development Bank. Some of the funds from these institutions end up in developing countries.

Capital investments in projects related to renewable energy ‒ both in the shares of companies listed on stock exchanges, as well as the debt issued by these companies ‒ were regarded by investors as relatively safe. This was due to the business model of such companies based on long-term contracts for the supply of energy or, for example, on tax holidays. This calm was disturbed when the prices of fossil fuels ‒ oil, gas and coal ‒ plummeted. Contrary to the opinions of analysts, investors began to fear that the demand for „green” energy may begin to decrease.

In the last days of March, reports emerged that SunEdison, a company producing solar panels and also engaged in buying wind and solar energy projects around the world through its subsidiaries, may have problems with financial liquidity and wants to seek protection from creditors.

SunEdison delayed the publication of its annual report twice, and according to the latest available data from the end of the third quarter of 2015, it had a debt of USD11.7bn. According to the „Wall Street Journal”, the American Securities and Exchange Commission conducted an investigation in order to check whether the company had given accurate information about its financial liquidity in its previous reports.